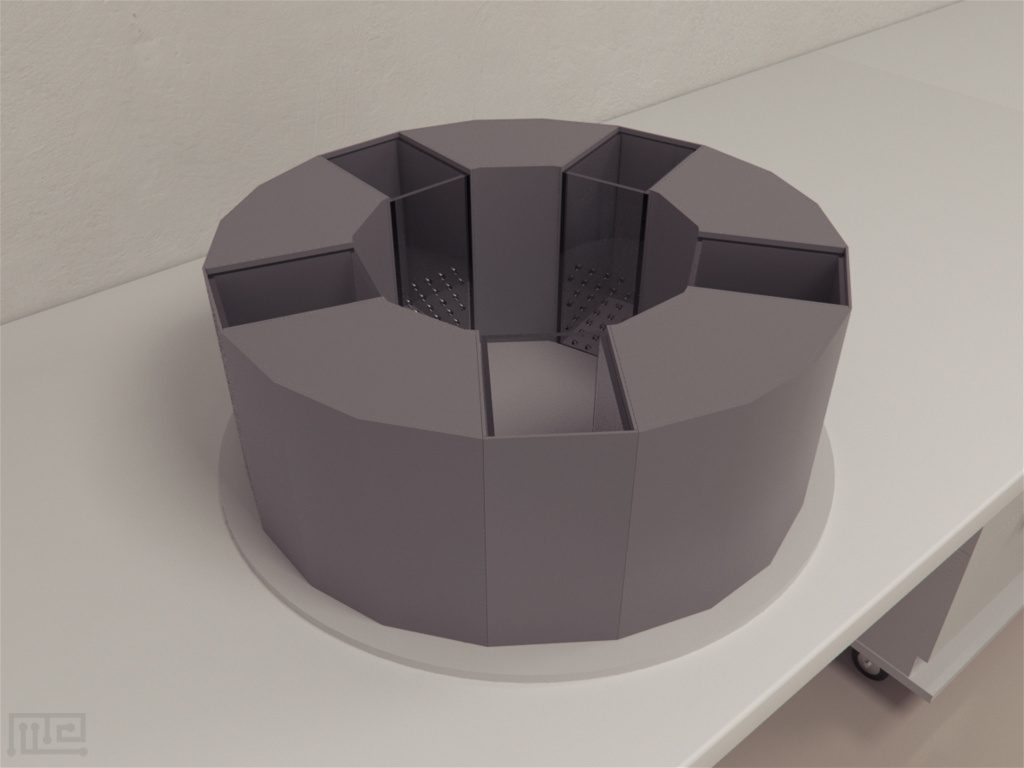 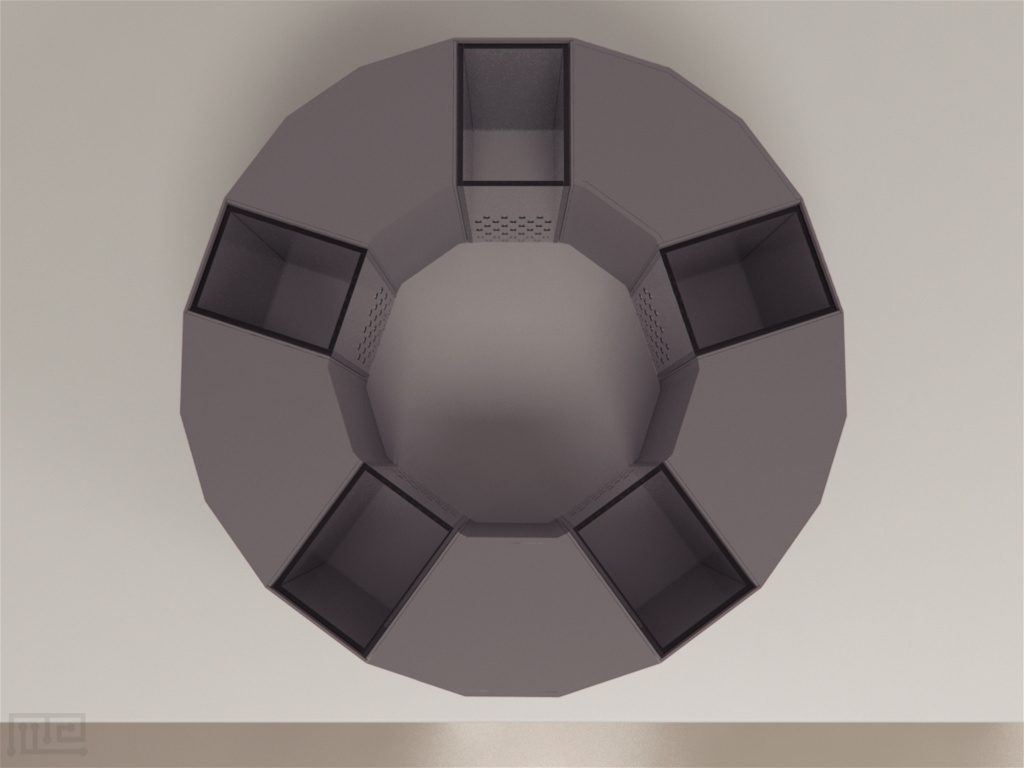 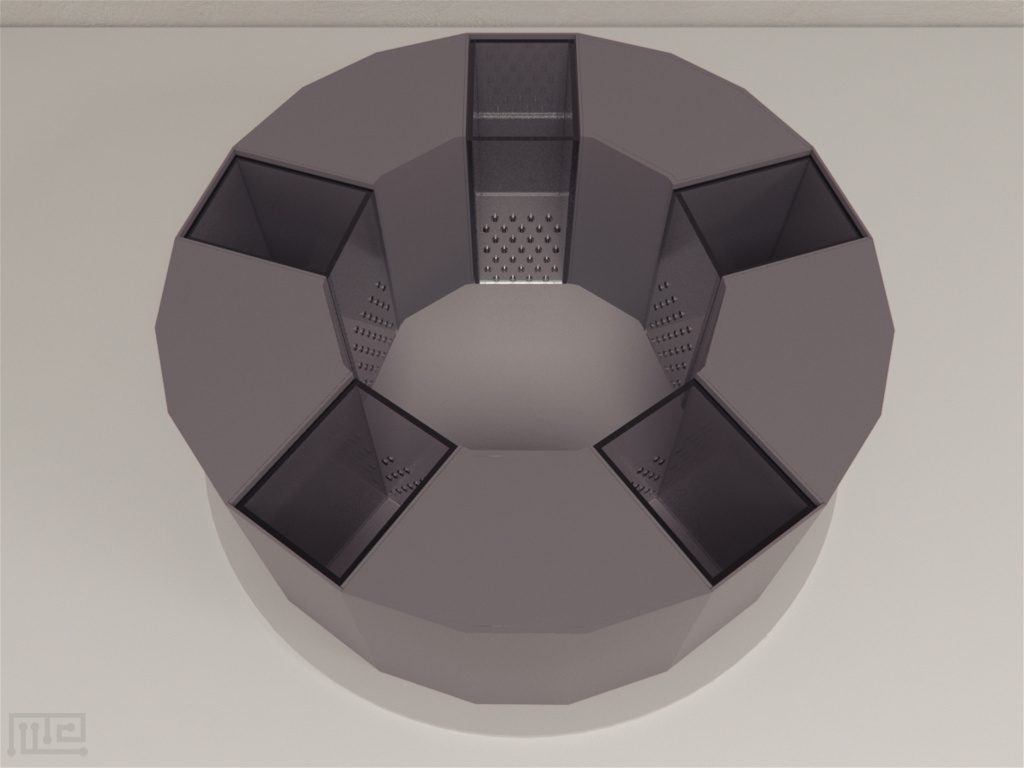 The sociobox consists of an acrylic apparatus with an outer ring of five rectangular removable boxes separated by fixed dividers surrounding a central open arena.

Per Month
Request a Sociobox

The SocioBox is a behavioral tool to gauge social function and recognition in animals. It is similar to The Sociability Chamber that measures subject’s interest in the new and unfamiliar object or animal. It produces robust assessment and measurement of social recognition deficits.

Social connectivity and recognition are crucial to emotional wellbeing, but this balance can be disrupted by a kaleidoscope of mental diseases – such as schizophrenia, autism, bipolar disorder, and depression. Rodent paradigms can provide a useful insight into the mechanisms that underlie social dysfunction as well as the prognosis and treatment of these psychological conditions. Like humans, rodents are capable of exhibiting rich social behaviors (Bevins & Besheer, 2006).

Sociobox was developed by Krueger-Burg et al. (2016). It consists of a circular chamber where the animal of interest (subject) is placed. The central arena is surrounded by an outer ring (inserts) of unfamiliar stimulus rodents. Both the subject and stimulus animals interact and exchange odor through tiny holes in the front panel of the inserts. The overhead camera records the movement and interaction time of the experiment rodent.

The SocioBox is made of gray acrylic and consists of a central arena (diameter 34 cm – 46 cm).

Each box is separated from the other by means of a divider. Within the central arena, there is a circular partition of white plastic (diameter 19-25cm; height 18-24cm) to separate the subject from the stimulus rodents.

The apparatus is first cleaned with the running water or wet tissues, dried and cleaned again with 70% ethanol. It is washed again with tap water to remove ethanol odor and dried. The process is repeated after every experiment to remove debris and olfactory cues.

The overhead camera (Noldus Ethovision XT) is mounted approximately 130cm above the apparatus to record the animal mobility automatically.

The subjects are kept under normal condition in a separate room. However, exposure to light (10-15lux) for approximately 30 minutes is given just before the task in order to acclimate the animals to the light conditions in which the testing procedure is carried out.

Three days before the task, the subject and stimulus subjects are placed separately in the Sociobox without any food and water restriction in order to reduce the anxiety of the novel environment.

Then the subject is moved into the central arena and allowed to explore the paradigm for 10 minutes per day. At this stage, there is no stimulus animal in the inserts. After five minutes of exploration, the circular partition is removed to mimic the test situation.

The stimulus animals are habituated separately. Each stimulus animal is placed in the insert which is then inserted in the outer slot of the box. Pre-training consists of three habituation sessions per day with each session lasting for 10 minutes. The circular partition in the central arena is removed during the last five minutes of habituation to mimic the test session.

The task involves placing stimulus rodents in the inserts and transferring the apparatus to the testing room, leaving behind just insert (6th insert) in the same light conditions. This insert is introduced in the recognition test phase.

The test session lasts for 10 minutes and consists of three phases: Exposure 1, Exposure 2, and the Recognition Test.

The subject is then removed from the arena and the apparatus cleaned in the prescribed manner.

In Exposure 2, the subject is placed back in the central arena for similar initiation and interaction as Exposure 1. After 10 minutes, it is removed, and the apparatus is cleaned.

At this stage, any insert is replaced with the 6th stimulus animal placed in the other room.

In the Recognition Test, the subject is returned to the circular partition and test is repeated.

The subject and stimulus animals are then returned to their home cages, and the apparatus is cleaned. It is important not to use any stimulus animal for more than three sessions in a row. This is likely to induce fatigue and social disinterest.

Sociobox can be used to study psychiatric diseases such as autism and schizophrenia which lead to social withdraw and inability to build a social network. (Krueger-Burg et al., 2016)

Evaluation of Social Memory and Social Discrimination in Rodents

Compared to males, female rodents are less able to distinguish between stimulus subjects and show recognition for the new animal (Miczek, Maxson, Fish, & Faccidomo, 2001). The gender differences in social behavior are interesting and worth pursuing.

The main purpose of SocioBox is to test social recognition in the subjects. For this purpose, Krueger-Burg et al. (2016) selected healthy juvenile mice of 3-6 weeks old. In the circular behavioral chamber, the mouse of interest interacted freely with the unfamiliar mice held in rectangular inserts. The movement of the subject was recorded and the interaction time was calculated.

In the first part of the experiment, the experimental mouse exhibited remarkable interest in all stimulus mice, but the interest waned in the repeated exposure. Instead, it was seen spending more time with the new stimulus animal reflecting the ability to differentiate between the old and the new encounter. The researchers concluded that Sociobox could identify social recognition problems in animals and recognize the subtle disease-related changes.

Social behaviors are scored as Social Recognition Index (SRI) by plotting a graph between the exposure of each subject animal and the interaction time (seconds).

Data analysis is done on the following parameters:

The Sociobox is remarkably simple to assemble and use. The hard, shatter-resistant material allows for multiple implementations. It is portable and can easily be carried from one room to another.

The box is large enough to house a number of rodents at once. There is enough room for both the experimental as well as stimulus rodents to move around freely without feeling congested or huddled up.

The apparatus is easy to clean; requiring only water and ethanol as cleaning agents.

It is a highly reliable tool to identify and assess social recognition abnormalities, the hallmark of schizophrenia and autism, in rodent models. The findings of which can be later investigated in clinical studies.

The Sociobox requires repeated cleaning, ie, after every exposure and interaction. A lack of proper cleaning can alter the results. The experimental and stimulus rodents exchange odor by touching or nose poking the tiny holes on the front slider of every insert. If the apparatus is not thoroughly cleaned, the olfactory molecules from the last interaction can linger therein distracting the rodent and confounding the performance and outcome.

Another limitation of the apparatus is that it requires the behavior of the subject to be assumed in advance, and based on this assumption, it defines zones of movements. If the movements of the subject do not match the assumption, the interaction time can be over- or underestimated.