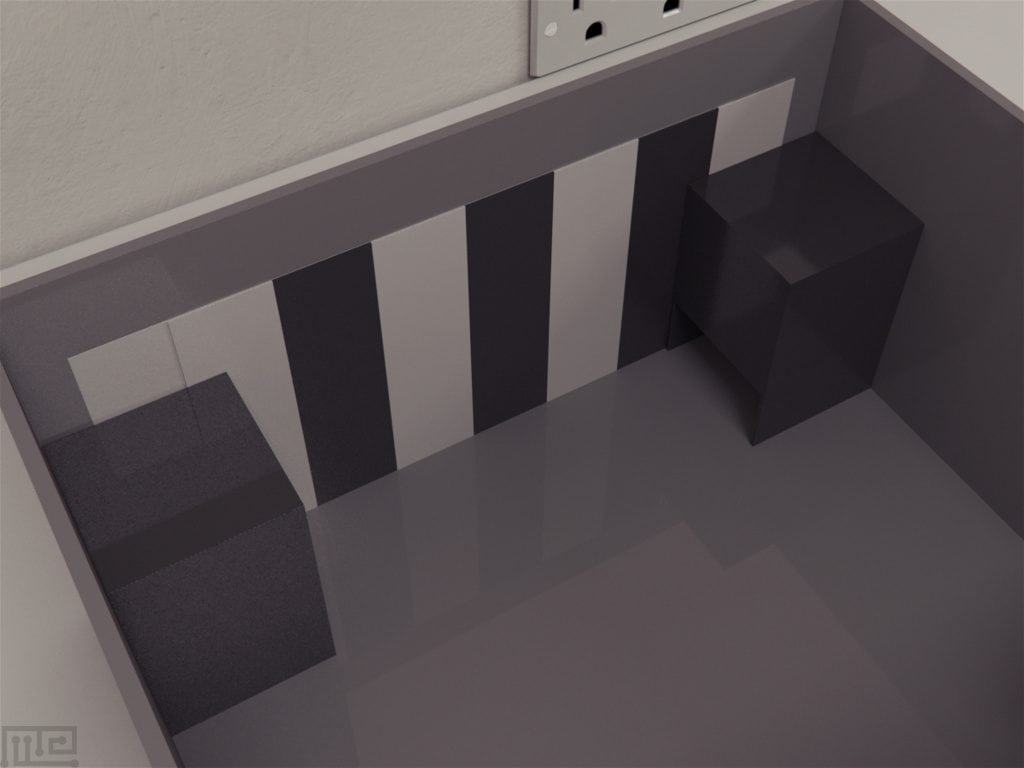 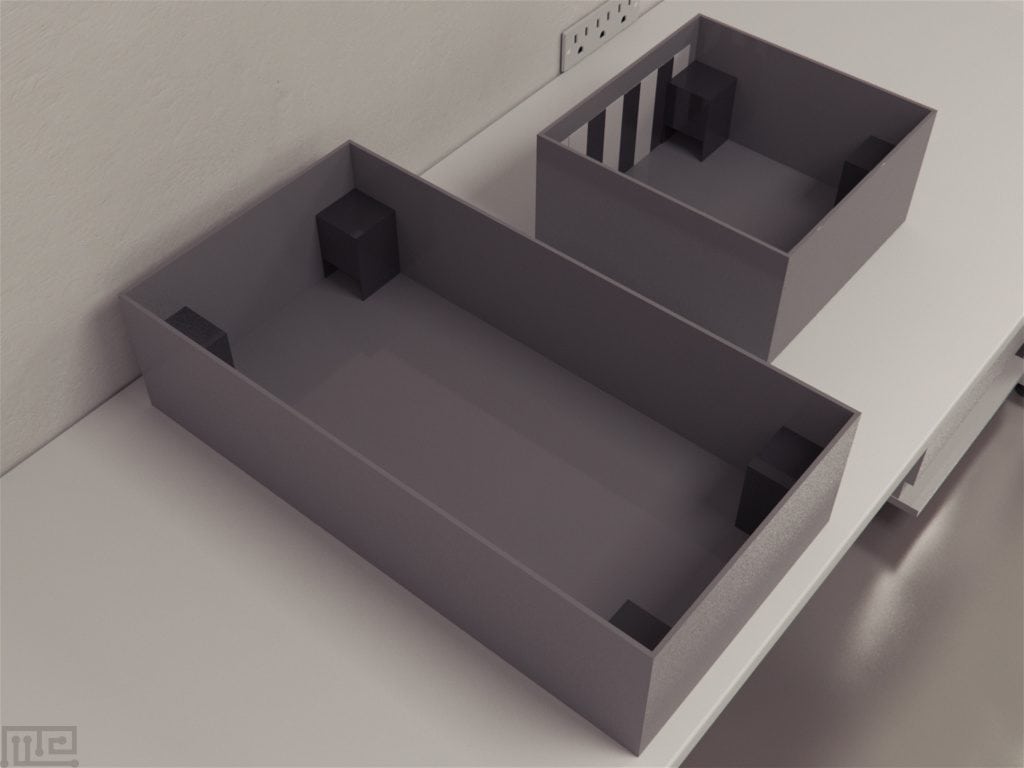 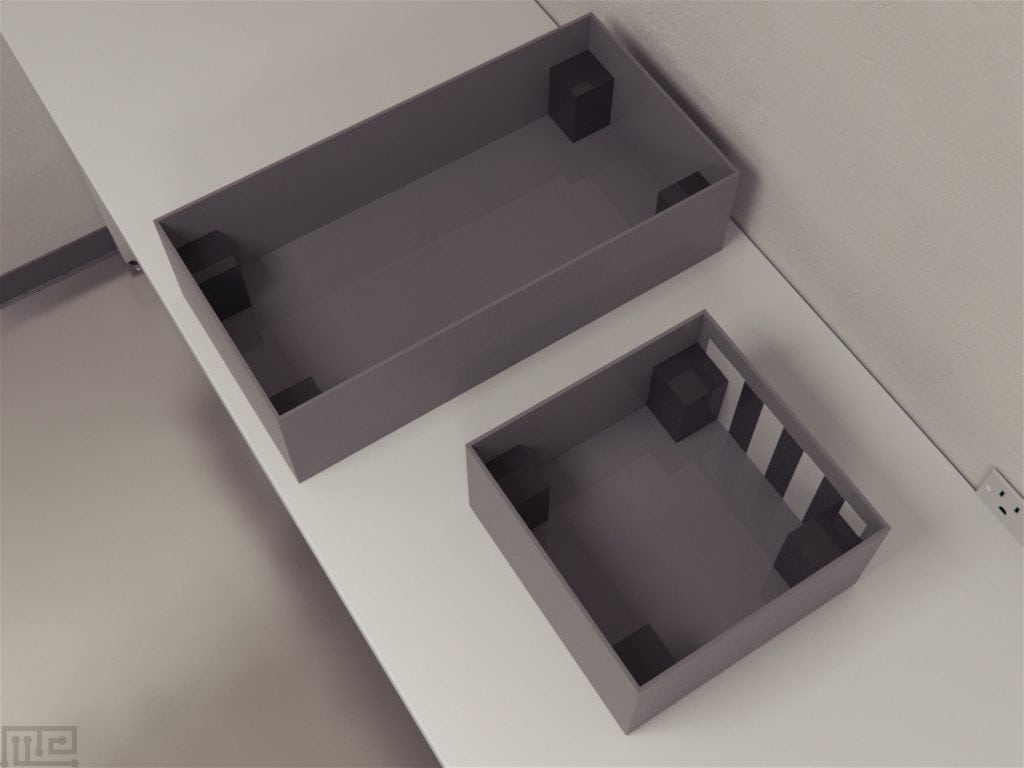 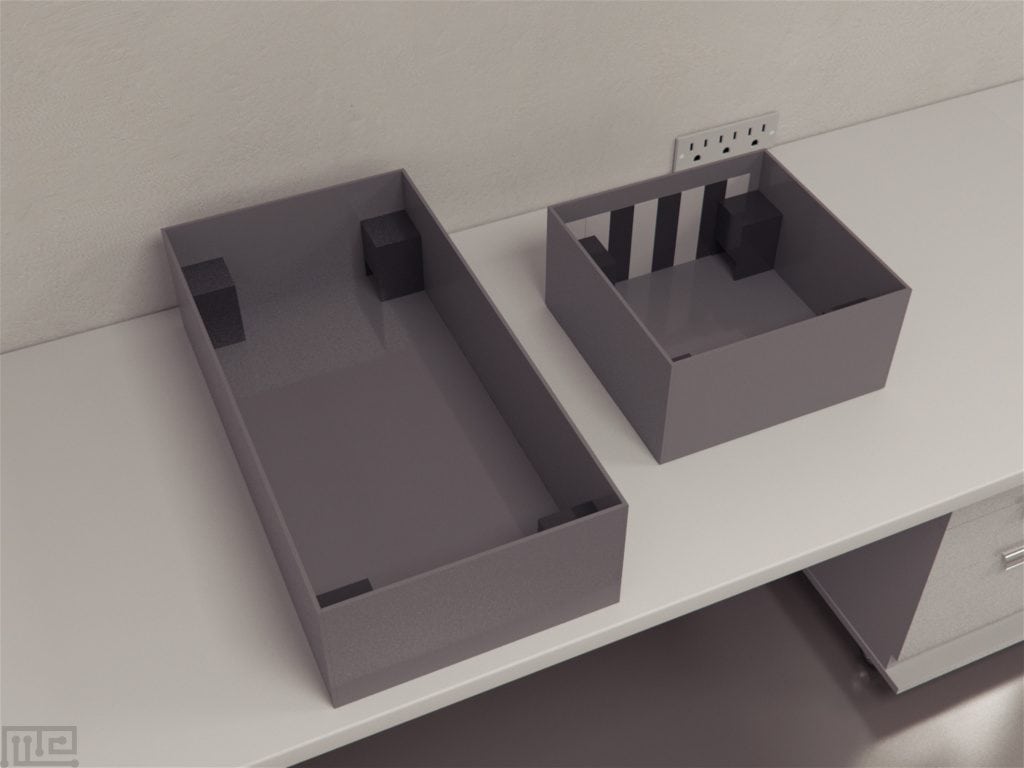 The Spatial Reorientation task was originally described in the literature in rodents by Lee et al (2015). The apparatus allows for tests of cue specificity and task specificity in spatial reorientation in mice using two types of
environmental cues:  1) boundaries and 2) features (stripes), in two types of tasks: A) working memory and B) reference memory.

The arena is filled by the experimenter with 5 mm of water.

In each corner is a black box with opening (7.5 7.5 4 cm) on one side. To minimize the availability of any potential visual cues, the opening is always on the side of the box that faced away from the center of the arena.

Spatial navigation and memory play an important role in the survival and functioning of any navigating species. The most common model in the investigation of spatial cognition makes use of rodents in a variety of spatially motivated tasks. However, the traditional methods of investigation such as the Morris Water Maze fail to provide an insight into the specificity of the processes underlying navigation.

Lee and colleagues addressed the two factors, the environmental cues and the task involved in learning them, that influence spatial navigation in their findings published in 2015. They developed the Spatial Reorientation task to test cue specificity and task specificity in spatial reorientation.

The apparatus consists of two different and separate chambers to test task and cue specificity in the spatial reorientation of mice. The square box, unlike the rectangle box, has three gray walls and one wall striped black and white. These arenas use two types of cues, boundaries, and features, for two types of tasks, working memory task and reference memory task.

The apparatus consists of two separate boxes: A rectangle box with uniformly colored gray walls having dimensions 20 x 80 x 20 cm and a square box having dimensions 40 x 40 x 20 cm with three uniformly colored gray walls and one featured wall having black and white stripes. At the corner of each of these boxes are four black boxes (8 x8 x 12 cm), with one of the boxes having an opening of 7.5 x 7.5 x 4 cm on one side facing away from the central arena to avoid, any potential, visual cue.

The experiments are carried out in a testing area created using uniformly colored and light-proof black curtains. The sessions are monitored and recorded using tracking software and video recorder, such as Noldus Ethovision XT, mounted on the ceiling. The arenas are filled with 5 mm of water, such that only the paws of the animal get wet. The water and the bright light of the open arena motivate the subject to explore and find the corner box with the opening. The target corner box provides the subject with a safe and dry space.

Before reintroduction into the arena, the subject is disoriented in the covered cylinder for 30 seconds during which the arena is rotated 90 degrees with respect to the environment and the experimenter and the target box is rinsed with water. Each test session lasts about 1 minute after reintroduction, and the inter-trial interval is maintained at about 1 hour. (Lee et al., 2015)

The target corner box is changed for each trial and is made inaccessible during the 60 second test period to measure time spent by the subject at each corner. The subject will be likely to prefer geometrically correct corners in the reorientation task on the successful use of geometry.

Subjects are tested in the square arena that lacked environmental geometry. The striped wall provides the subject with distinction in comparison to the other walls. When the subject successfully utilizes the feature wall as the positioning cue in the reorientation task, it chooses the correct target corner. Partial utilization of the position cue results in the preference for the striped corner boxes when the target is a striped corner and the two plain corners when the target is a plain corner.

The experiment is carried similarly as mentioned earlier with two exceptions: goal location remained constant during all trials, and target corner remained accessible after the disorientation procedure.

The experiment is carried out as mentioned above in a square arena with feature wall. Stable goal and reinforcement training is used to assess the reference memory. The feature wall is expected to improve the performance of the reference task when the target location is near the striped wall.

The data collected through the Spatial Reorientation task consists of:

When the subject is within 3 cm from the corner box, it is regarded as the corner choice.

The above graph depicts the time spent in the correct and incorrect corners during the spatial working memory task in the square box with the feature wall.

The Spatial Reorientation task, unlike traditional methods of behavioral testing such as the Morris Water Test, allows an insight into the specificity of the processes underlying spatial navigation. The two set-ups allow investigation of boundary geometry and feature wall’s influence on the spatial working memory mapping. The test assists in the investigation of spatial impairment and memory in genetic disorders (Lee et al., 2017).