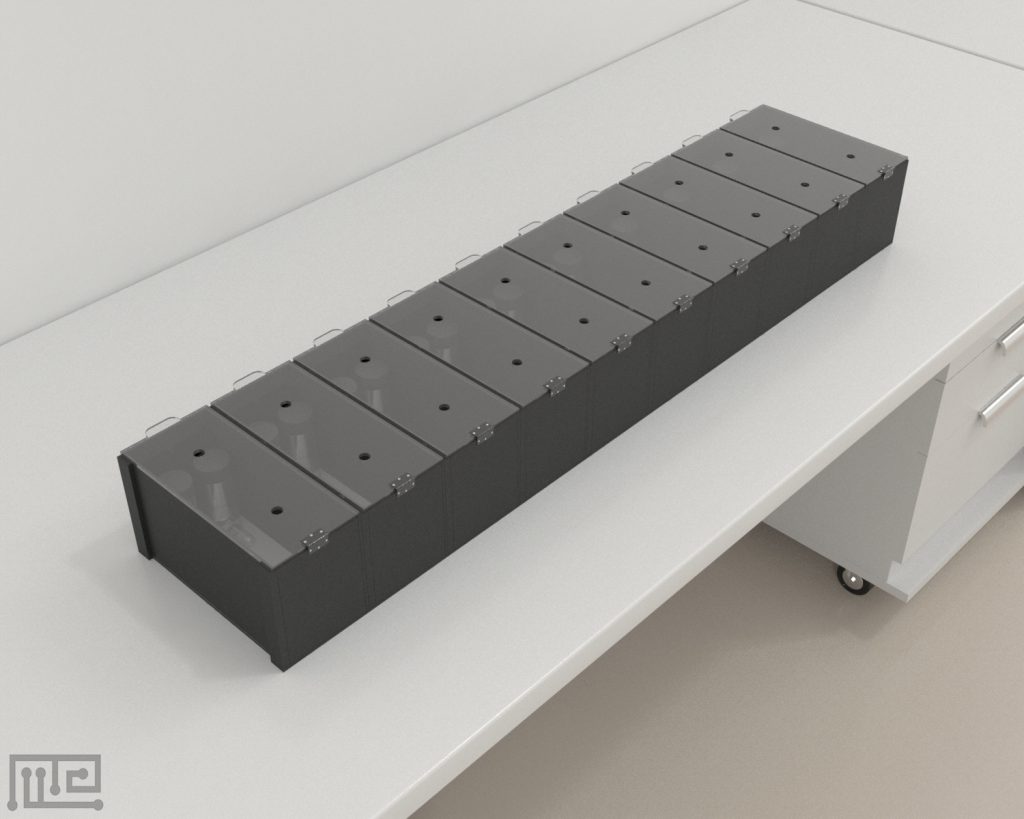 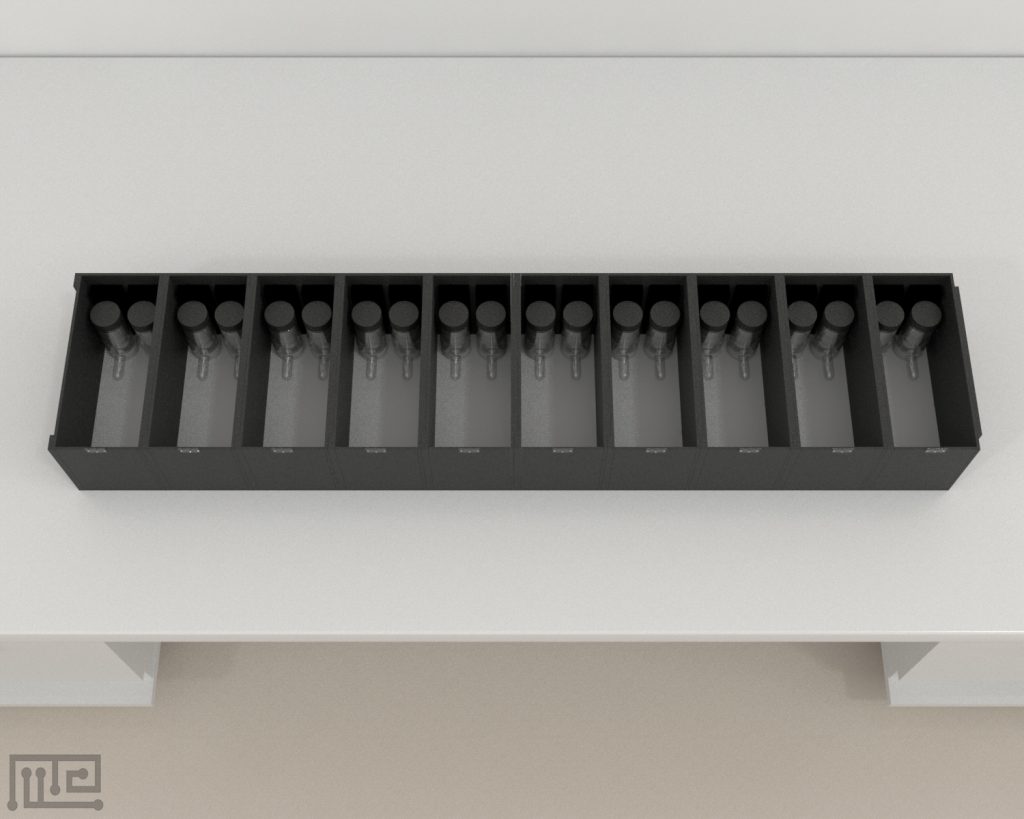 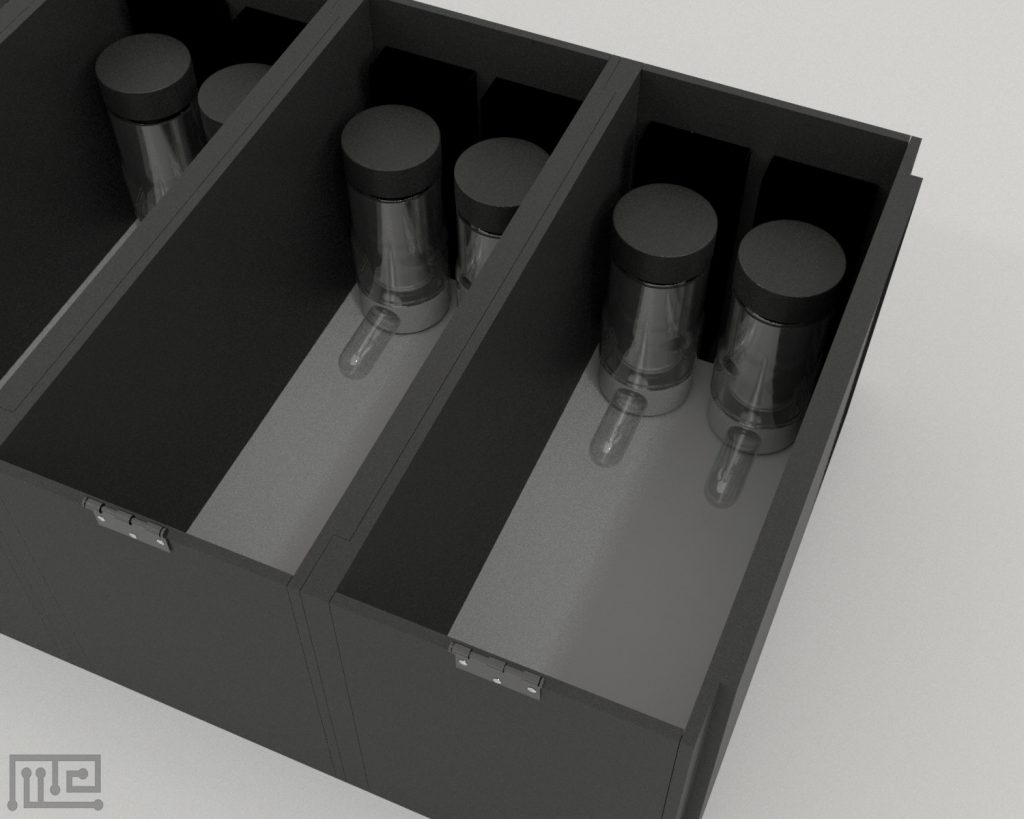 The Sucrose Preference Test Apparatus was used by Meng-Ying Liu et al. (2018), for sucrose preference test for measurement of stress-induced anhedonia in mice.

The apparatus consists of ten chambers of the same size. Mice are transferred singly to each chamber and given free access to one tube of sucrose solution and one tube of regular water. In the chamber, the mice cannot see each other, avoiding any effects resulting from social interference.

The Sucrose Preference Test Apparatus is a reward-based test used to investigate anhedonia in rodents. Anhedonia is the inability to feel pleasure in pleasurable activities or having a lack of interest in rewarding stimuli. In the Sucrose Preference Test Apparatus, the subjects are given access to two water bottles, one filled with sucrose solution, which serves as the rewarding stimuli and the other with regular water. Rodents have a natural preference for sweets; therefore, a reduced preference in the sucrose solution indicates the presence of anhedonia.

The Sucrose Preference Test Apparatus consists of a black rectangular black box and allows numerous subjects to be tested at the same time. It has ten equal-sized chambers to place individual subjects. Inside each chamber, the two water bottles used for taste preference testing are placed. The chambers of the apparatus are separated by opaque black walls, which inhibit the subjects from seeing each other during trials to eliminate social interference.

The Sucrose Preference Test protocol is commonly used in combination with the Chronic Mild Stress Protocol in which the subjects are exposed to unpredictable mild stressors such as food and water deprivation to induce anhedonia (Gross & Pinhasov, 2016). The task involves testing the subjects in the Sucrose Preference Test Apparatus to obtain their baseline results, after which the subjects are exposed to a period of chronic mild stress. Sucrose preference testing is then repeated to observe whether depression-like behaviors are manifested in the subjects. Since the Sucrose Preference Test Apparatus is reliable in investigating anhedonia in subjects, it can effectively be used as a translational tool to measure the effects of antidepressant drugs in reducing depression-like behaviors, as well as explore the long-term neurobiological effects of antidepressant drug use (Flores-Ramirez et al., 2018). Moreover, the apparatus can also be used to test the effects of pharmacological manipulations, brain lesions, and diseases and disorders on depression-like behaviors. Other apparatuses used to measure depression-like behavior in rodents include the Tail Suspension Test, the Forced Swim Test, and the Chronic Social Defeat Stress Cage.

The Sucrose Preference Test Apparatus consists of a rectangular box that is made of black polyethylene material that is 0.5 cm thick and measures 100 cm in length, 24 cm in width, and 13 cm in height. It is divided into ten equal-sized chambers by walls made of the same black polyethylene material. The chambers measure 10 cm in width, 24 cm in length, and 13 cm in height. Each chamber is covered by a transparent polyethylene cover that contains two 1-cm-diameter holes to allow the subjects to breathe. Inside each chamber, two liquid diet feeding tubes with holders are placed. The feeding tubes have a U-turn shape at their drinking end and are gastight to prevent leakage.

Clean the apparatus thoroughly before starting trials. Place a fresh tissue paper pad at the bottom of each chamber of the apparatus after every trial. Appropriately light the apparatus. A tracking and recording system such as the Noldus Ethovision XT can be used to assist with observations.

Place two water bottles in the home cages of the subjects, one containing sucrose (1% (wt/vol)) and one containing water for 48 hours. After 48 hours, in each chamber of the Sucrose Preference Test Apparatus, fill sucrose solution (1% (wt/vol)) in one of the bottles and fill regular water in the other bottle. Place a fresh tissue paper pad at the bottom of each chamber and place two food pellets on it. Place a subject in each chamber of the apparatus and allow them to access the sucrose solution and water for 24 hours. After 24 hours, return the subjects to their home cages.

Fill the two bottles in each chamber of the apparatus, one with sucrose solution (1% (wt/vol)) and the other with regular water. Dry the outside surface of the bottles and weigh them. Place a subject in each chamber of the apparatus and allow them to access the sucrose solution and water. After 12 hours, remove all the bottles from the chamber and weigh them. Return the subjects to their home cages for 12 hours. After 12 hours, perform another trial. After the second trial, place the subjects back into their home cages with access to regular food and water for 7 hours. After the 7 hours, remove the food and water from the subjects’ home cages and deprive them of food for 24 hours. Place the subjects back into the Sucrose Preference Test Apparatus and perform another trial.

Gross and Pinhasov (2016) investigated the effect of chronic mild stress (CMS) on sucrose preference behaviors in submissive mice. Outbred Sabra (Wt) mice and submissive sabra (Sub) mice of 2 months old were used in the experiment to investigate whether the submissive mice would display heightened anxiety and depressive-like behavior relative to Wt after exposure to CMS. The subjects were divided into naïve and stressed groups. The naïve subjects remained in their social housing condition (4 mice per cage) while the stress group was transferred to individual housing. The subjects were further divided into control and CMS-exposed groups. Therefore, a total of 4 experimental groups were used in the experiment: naïve Wt, CMS-exposed Wt, naïve Sub, and CMS-exposed Sub. The CMS groups were exposed to daily random stressors for six days a week for five weeks. Sucrose preference testing was conducted on the days where the subjects were not exposed to stress. During sucrose preference testing, the subjects were given access to a bottle with a sucrose solution and a bottle with regular water. The subjects were exposed to 2.5% sucrose solution for 2 hours before starting trials to overcome neophobia. During testing, the subjects were exposed to 1% of sucrose solution or water for 24 hours. After testing, the subjects were divided into two groups in which the subjects were exposed to CMS or remained naïve. Results from the Wt group indicated that the five-week CMS exposure had an overall significant effect of time, stress, and time-of-stress interaction on sucrose consumption. CMS significantly reduced sucrose preference in the second and third week of testing. However, the effects of sucrose preference stabilized in the fourth and fifth weeks. In the Subgroup, similar results were observed. The subjects were also required to perform behavioral testing experiments on the Open Field Test Apparatus, the Elevated Plus Maze, and the Three Chamber Test. Behavioral testing was performed before and during the last week of CMS exposure. The results indicated that CMS exposure reduced locomotion in the open field test. In the elevated plus-maze, only the CMS-exposed Sub mice displayed impaired anxiety-like behavior. The CMS-exposed Sub mice also displayed impaired social exploration in the three-chamber test.

The following can be observed on the Sucrose Preference Test Apparatus: