A test of anxiety 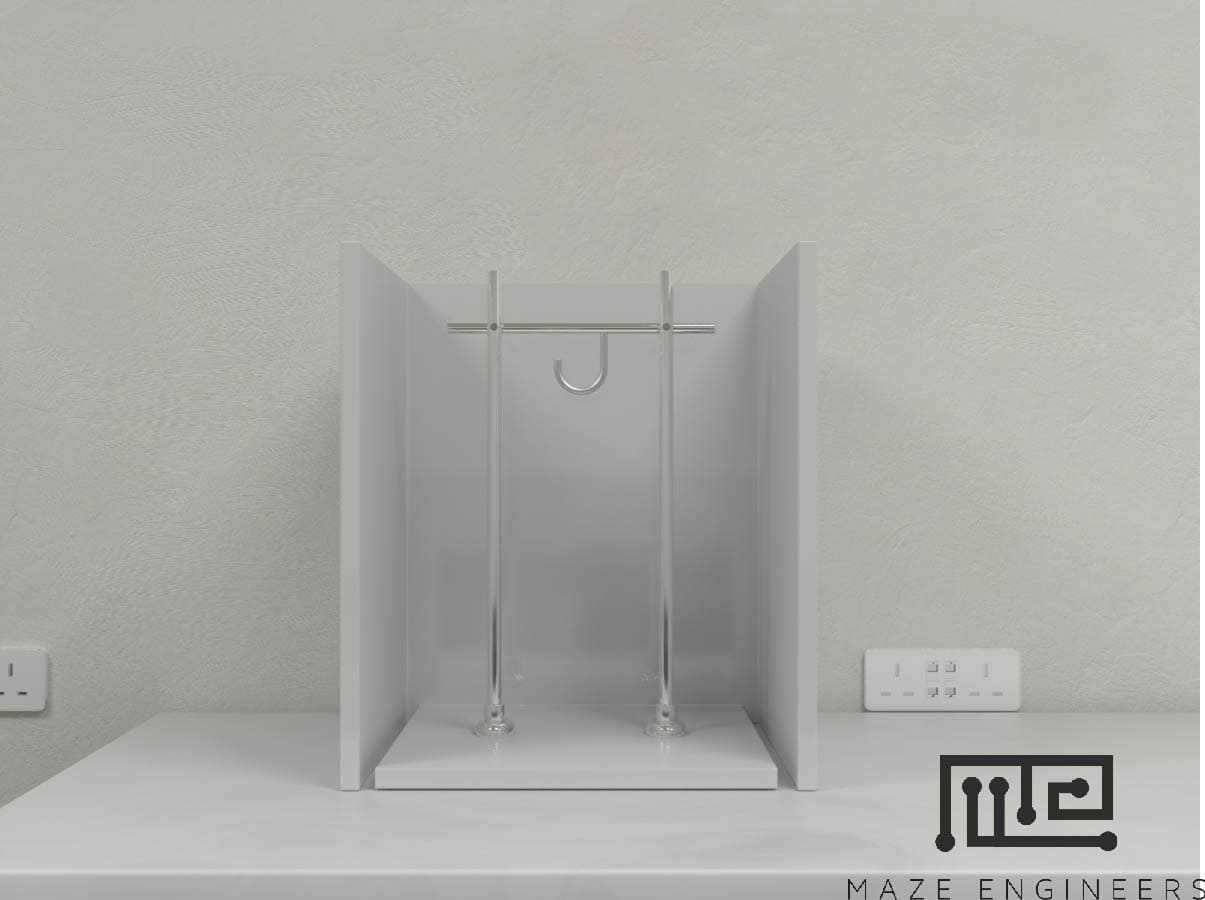 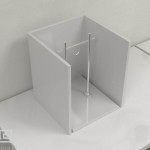 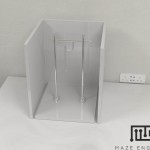 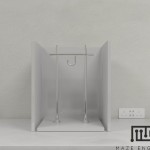 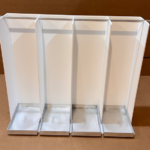 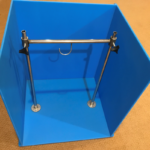 Since its creation in 1985, the tail suspension test is a standard test of depression (Steru et al., 1985). The standard protocol is to hang mice or rats to the apparatus by their tail. An approximate measure of depression and the psychological effect of antidepressants is made by analysing the periods of times of agitation and immobility of rodent subjects. Escape-oriented behaviors are quantified during the experiment.

The tail-suspension test is a highly validated test for potential antidepressant pharmaceutical compounds.

Mouse set of one

Rat set of one

The Tail Suspension test is performed in an opaque plastic box that can have multiple compartments to enable testing animals in parallel. Dimensions can be adjusted depending on strain being tested. Castagne et al. (2009) suggested using plastic enclosures of 20 × 25 × 30 cm (see 4).  Tape can be attached to the tail and be strong enough to carry the weight of the mouse, but easy to remove to avoid damaging the skin. An automated tail hook is also available. A timer should be used if not using an automated system. The mice are not able to touch the walls of the compartment while suspended (minimum 150 mm distance from any object). As described originally by Steru et al. (1985), the mouse is attached to a hook by adhesive tape placed 20 mm from the extremity of its tail. The distance between the floor of the device and the hook can be adjusted (see 4). If using an automated system/sensors to record movement, it should be zeroed and optimized to ignore respiratory movements. For optimal contrast, the experimenter should consider the use of a background depending on the color of the animal (for instance, dark box for albino animals, and light box for other colors) (Can et al., 2012).

If performing multiple tests in parallel in the same box, the animals are not able to see or interact with each other. A noise generator should be used to mask intermittent environmental sounds and thus to avoid startling the mice due to loud noises (Can et al., 2012). Furthermore, if using the computerized unit, a level filtering device can be used to set the desired sensitivity to provide maximum discrimination of gross body movements (Cryan et al., 2005)

To facilitate cleaning, a detachable aluminum tray can be considered to collect faeces or urine. The box should be wiped thoroughly after each test with a sterilization solution, 95% ethanol, or something similar.

If using a strain that shows tail climbing behavior (Mayorga and Lucki, 2001), climbstoppers should be used. These can be made in the lab from polycarbonate tubing and should consist in clear hollow cylinders that are placed around the tails. Can et al. (2012) suggest using cylinders with (4 cm in length, 1.6 cm outside diameter, 1.3 cm inside diameter and 1.5 grams. Please contact us and we can provide these on request.

The Tail Suspension test is widely used to evaluate antidepressants in rodents and follows the assumption that, when suspended, an animal will alternate between periods of agitation and immobility. If presented with an inescapable situation, mice will develop an immobile posture. Therefore, when using effective antidepressants, the experimenter should expect a decrease in time spent in immobility.

It is critical that all environmental factors that may influence the animal’s behavior are reduced to a minimum. Test measurements must always be made under blind conditions. Furthermore, the overall experimental design should reflect proper counterbalancing between variables (all experimental groups should be tested in every session and every compartment).

Preparation of equipment and test room

All equipment should be ready to use before starting the test. Tape should be cut, video camera correct functioning should be tested and, if used, white noise generator switched on before bringing the animals to the test room to minimize stress and time spent acclimating the animals [at least one hour (Can et al., 2012)]. Also, if using an automated system to record and analyze results, test session should be identified before handling the mice.

If using a strain known to climb their tails, climbstoppers should be applied around the tails. Tape should then be applied at the end of the tail and to the hook/suspension bar (see sections 2 and 4) and the experimenter should make sure the tape is strong enough to hold the tail. This process should be completed as quickly as possible to minimize the animal’s stress and avoid introducing confounding variables.

Testing should then be started and, if video recording, mice must be suspended in a way that does not obstruct the camera view.

Studies that use TST typically perform one session of 6 min. The animal’s tail must hang in a straight line. At the end of each session, mice are returned to home cage and tape is gently removed. Cages are then returned to the animal room. Collection trays and apparatus must be carefully wiped with sterilizing solution.

If more than one experimenter will analyze the data, criteria must be uniform to avoid interobserver-induced variability. Training of new investigators with more experienced colleagues is strongly advised. When scoring the animal’s behavior, Can et al. (2012) suggest measuring time spent in active movements and then calculating time spent in immobile posture rather than direct measurement of immobility.

Chermat et al. (1986) reported an adaptation of the TST to rats. However, Can et al. (2012) advised against using TST in rats or unusually heavy mice due to the potential pain induced by supporting these animals weight by the tail.

The data obtained from the TST is generally visualized by plotting the time spent in immobility in the different experimental groups (mean ± standard error of the mean). Different genotypes, antidepressants or doses can be compared in the same graph. The following sample graphs are examples of comparisons of different antidepressants (A) and doses of the same antidepressant (B):

This way of presenting the results enables easy comparison of the effects elicited by different antidepressant drugs and/or doses.

Automated systems further enable analyses of energy and power of movement, which can be presented in a table. These results are presented in arbitrary units (mean ± standard error of the mean).

The Tail Suspension test is a reliable method to screen antidepressant activity, as it is sensitive to low doses of drug, the test provides a clear dose-response effect, results are objective and, unlike the forced-swim test, does not elicit hypothermia (Steru et al., 1985, Cryan et al., 2005). Also, TST enables the screening of antidepressants irrespective of the mechanism of action, is inexpensive, methodologically unsophisticated and amenable to automation, which offers the possibility of assessing additional parameters such as energy and power of movement.

As discussed by Cryan et al. (Cryan et al ., 2002), the sensitivity of TST to short-term drug effects may also be a limitation, as clinical recovery with antidepressants in humans usually requires chronic treatments. Special attention must be paid if using mouse strains that show tail climbing behavior (e.g. C57Bl/6) (see sections 2 and 3). As in other behavioral assessments, environmental factors may induce lack of reproducibility between different laboratories (Crabbe et al., 1999). Furthermore, special attention must be paid when selecting the animal strain, as inter-strain differences have been reported (Cryan et al., 2005).

Our other anxiety and depression related apparatus here

Cryan JF, Mombereau C, Vassout A (2005) The tail suspension test as a model for assessing antidepressant activity: review of pharmacological and genetic studies in mice. Neuroscience and biobehavioral reviews 29:571-625.