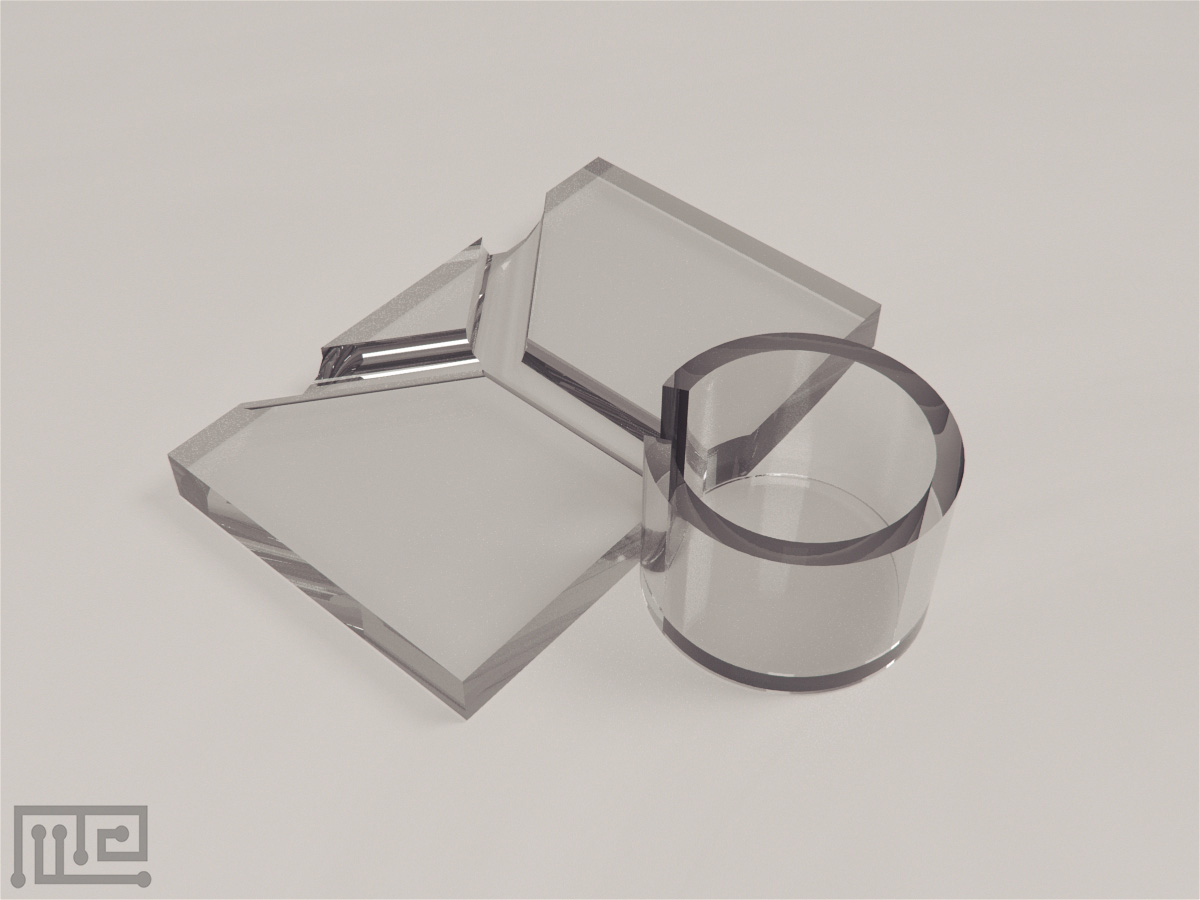 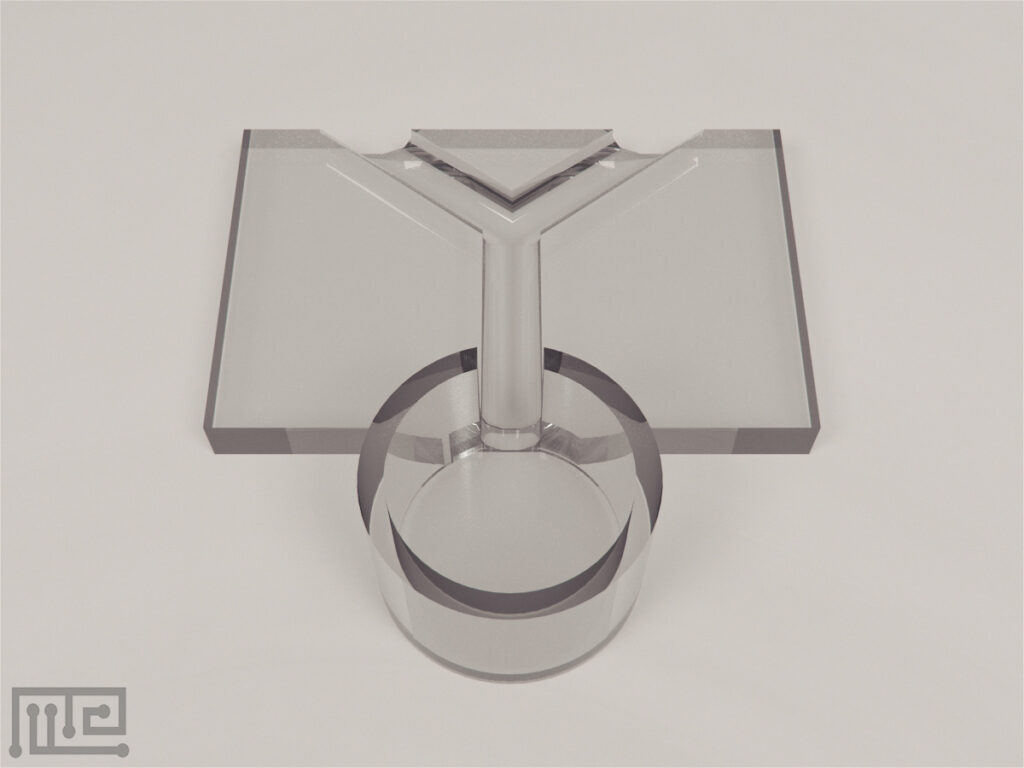 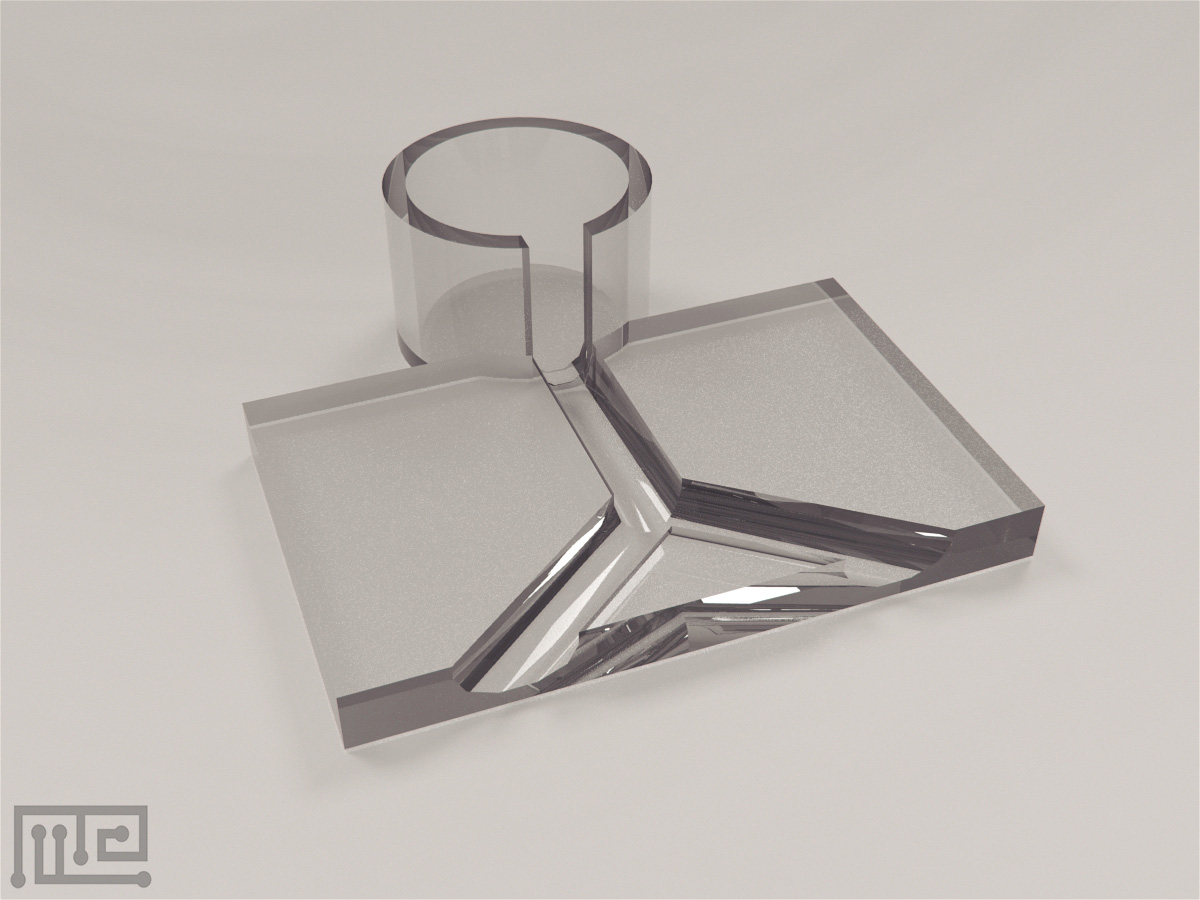 The Y-Choice Waiting Chamber was used by Judith Reinhard and Manfred Kaib (2000), to assess trail communication during foraging and recruitment in the subterranean termite.

An artificial trail, covering the stem and either branch of the Y, was laid by applying sternal gland extract with a microcapillary on a piece of paper. One microliter of extract per cm was applied, equivalent to 0.1 sternal gland per cm trail in the case of the crude extract and correspondingly less for trails laid with the diluted sternal gland extracts.

The Termite Y-Choice Waiting Chamber is used to investigate the trail-following behavior in termites during foraging and recruitment processes. The apparatus is an adaptation of the conventional Rodent Y-Maze popularly used in the assessment of cognitive behaviors. Similar to the Ant Double Y-Maze, the Termite Y-Choice Waiting Chamber also has the Y-Maze engraved into a thick opaque block of acrylic to create an environment similar to the natural burrows. The apparatus comes with an additional rotatable cylindrical waiting chamber that allows the experimenter control over maze access to the subject.

Similar to other eusocial insects, such as ants and honeybees, termites rely on a range of communication cues to organize and maintain their colonies. In particular, pheromones, such as from the sternal gland, have been observed to play a crucial role in foraging and recruitment behaviors among termites (Kaib & Leuthold, 1982; Sillam-Dussès et al., 2007). The Termite Y-Choice Waiting Chamber provides the opportunity to evaluate the role of these pheromones in trail laying in a simple two-choice set-up. In the simplest form, trail-following behaviors can be assessed using pheromone versus control trail set-up in the maze. Additionally, different caste-based responses to trail signals and trail laying observed in termites (Critaldo, 2018; Gessner, & Leuthold, 2001) can also be assessed in the Termite Y-Choice Waiting Chamber. The waiting chamber feature of the apparatus also makes it adaptable for investigations involving colony-level communication.

Other apparatuses used in the study of insect behaviors include the Ant Binary Tree-Maze, Ant T-Maze, Ant Y-Maze, and Ant Double Bifurcation T.

The Termite Y-Choice Maze consists of an acrylic slab into which a Y-shaped groove is engraved. The groove starts with a stem that bifurcates into two branches. The stem and branches measure 2.5 cm in length with a semicircular cross-section of 0.7cm. The angle between the branches measures 105°, which creates a natural curve in the paths. Filter papers marked with extract trails can be placed under the maze to create the trails. The maze is arranged on an acrylic plate with its entrance connected to a rotatable cylindrical waiting chamber. The chamber consists of a slit opening that connects the waiting chamber to the maze when it coincides with the entrance of the stem.

Before commencement of a trial, rinse and clean the apparatus to ensure that there are no traces left of the former pheromone trail. Replace the filter paper for each new trial to prevent trail reinforcement. Ensure that the setup is illuminated appropriately. An automated tracking and recording system, such as Noldus EthoVision XT, can be used to assist with the observations.

With the entrance disconnected, introduce the subject into the waiting chamber. Lay the pheromone trail extending from the stem to one of the branches and the other branch with a control. Turn the chamber to make the maze accessible to the subject and observe behaviors. Repeat trials as required.

Arab, Carollo Blanco, and Costa-Leonardo (2012) investigated responses of foraging workers and soldiers of Coptotermes gestroi (Rhinotermitidae) to different concentrations of sternal gland using a Termite Y-Choice Waiting Chamber set-up. One-week prior to the assessment, 200 workers and 20 soldiers were maintained in an artificial nest and acclimatized. The choice assay was performed using sternal gland extracts obtained from a separate group of worker termites. The subjects were tested for their responses to concentrations of 0.001, 0.005, 0.01, and 0.1 glands/µl. The experiments were performed by depositing 1 µl of extract per 1 cm of the trail, starting from the base of the maze to one of the choice arms. The other arm was deposited with hexane, which acted as the control trail. The subjects were individually introduced to the Y-Maze from the waiting chamber and evaluated in 30 trials per concentration for each caste. It was observed that the activity of both castes was elicited with an increase in the concentrations. At 0.01 microliter of extract per cm, termites showed maximum activity; however, a further increase in the concentration decreased their activity.

Sillam-Dussès et al. (2005) investigated the behavioral effects of neocembrene A pheromone in of Prorhinotermes canalifrons and Prorhinotermes simplex using a Y-Choice Waiting Chamber. The choice assay was performed using the sternal gland extracts (Prorhinotermes), neocembrene A (obtained from female alates of Nasutitermes voeltzkowi), dodecatrienol and hexane (control). The experiments were done by depositing 1 µl of sternal extract per 1cm of trail extending from the base of the stem to one of the choice arms while the neocembrene A extract or hexane was deposited on the other arm which acted as the control trail. Individual termites were introduced into the maze through the waiting chamber and evaluated in 30 trials. Trail-following was elicited at the threshold concentration of 10–2 gland equivalent/cm of the trail (Geq/cm) in Prorhinotermes canalifrons, while it was higher than 10-2 Geq/cm for Prorhinotermes simplex. Both species showed trail-following at 10-1 ng/cm neocembrene A with maximal responses evoked at 1 ng/cm. The most active concentration of neocembrene A also resulted in the highest recruitment in the species. Dodecatrienol did not result in any behavioral effects.

Reinhard and Kaib (2001) investigated the trail-following responses of workers and soldiers of the Reticulitermes santonensis. A total of 20 worker and soldier termites were evaluated in the Y-Choice Waiting Chamber using decreasing concentrations of sternal pheromones. Sternal glands were obtained from both soldiers and workers, and the extracts were diluted with hexane to create varying concentrations between 10-2 to 10-5. The experiments were performed by depositing 1 µl of sternal extract per 5cm of trail extending from the stem to one of the choice arms while hexane was deposited on the other as the control trail. Individual termites were introduced into the maze through the waiting chamber and evaluated. Workers were observed to show higher activity between 2 × 10-5 and 1 × 10-4 (0.00005 to 0.0001 sternal gland/cm). In the soldier termites, the threshold was observed to be higher; between 1 × 10-4 and 2× 10-4 (0.0001 to 0.0005 sternal gland/cm). Caste of the extracts used did not affect the threshold concentrations.

Following parameters can be observed in the Termite Y-Choice Waiting Chamber,

The Termite Y-Choice Waiting Chamber mimics the natural system of tunnels built by termites during navigation. The rotatable waiting chamber feature allows control of access to the maze. The Termite Y-Choice Waiting Chamber can be extended to study other terrestrial social insects with similar foraging and recruitment processes. Additionally, the apparatus can be applied in investigations of social behaviors, including predator-prey behaviors and preference behaviors.