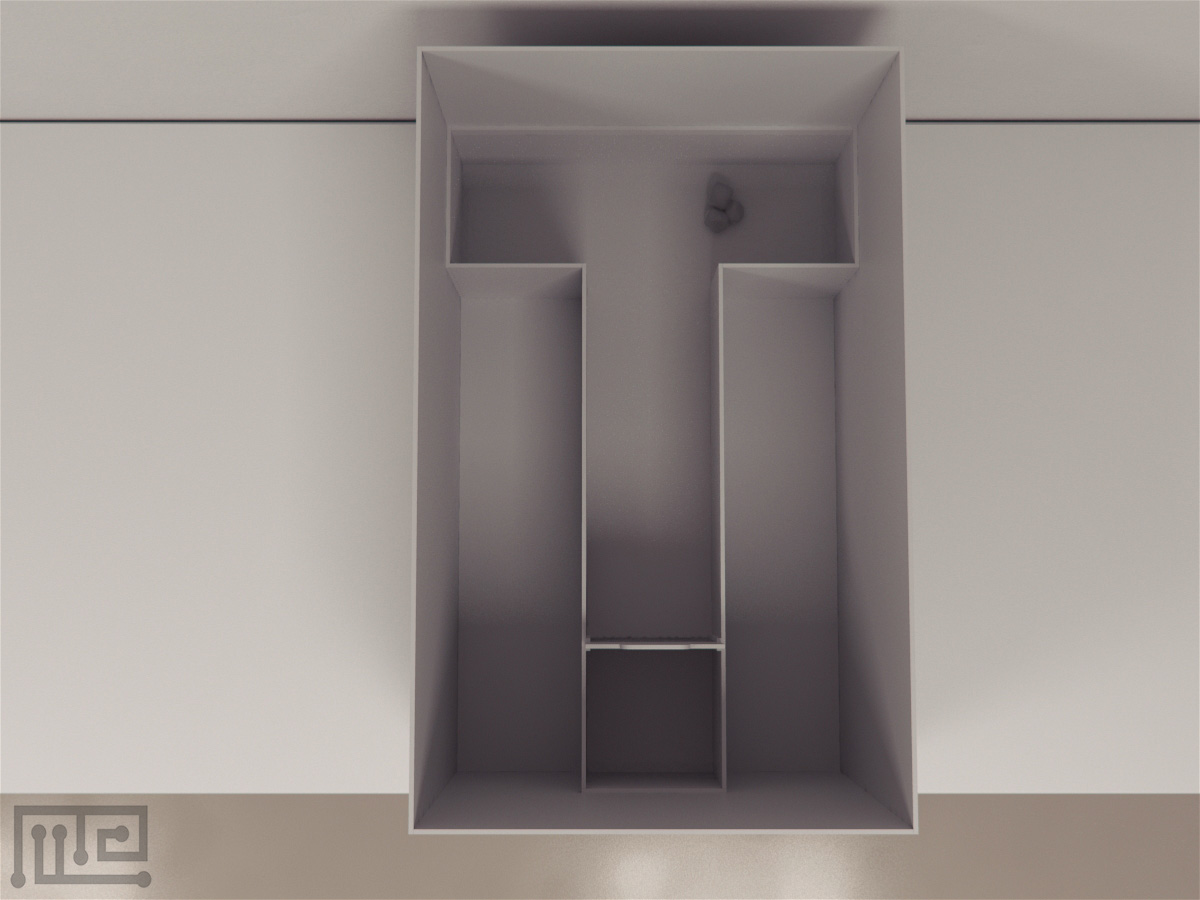 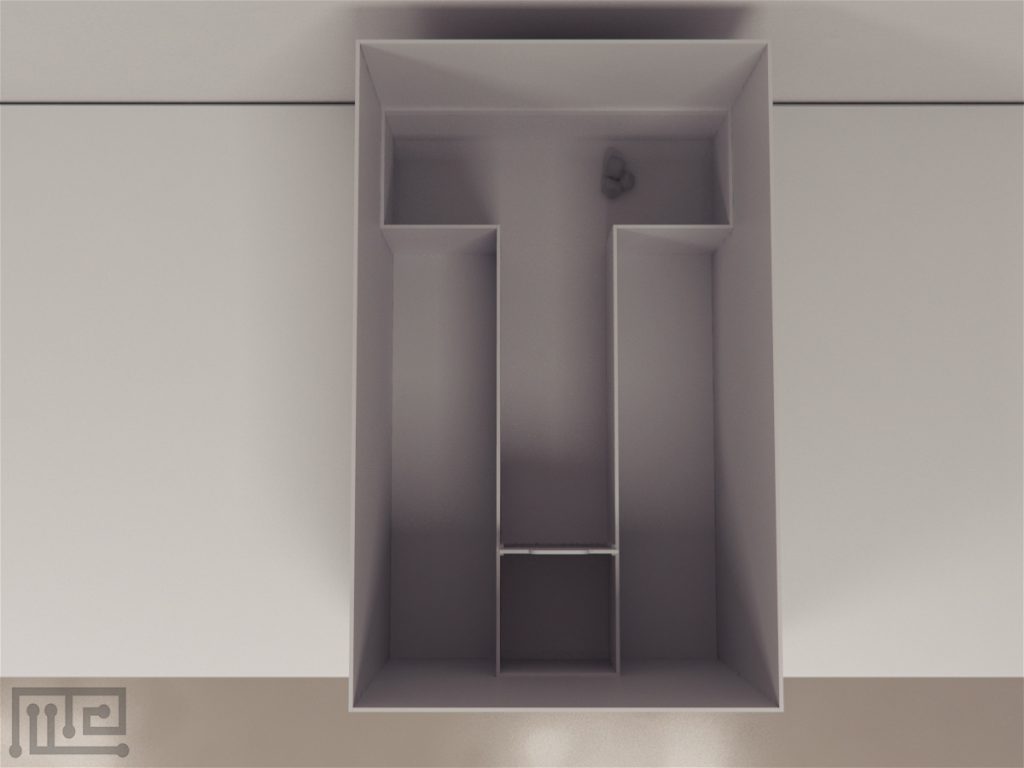 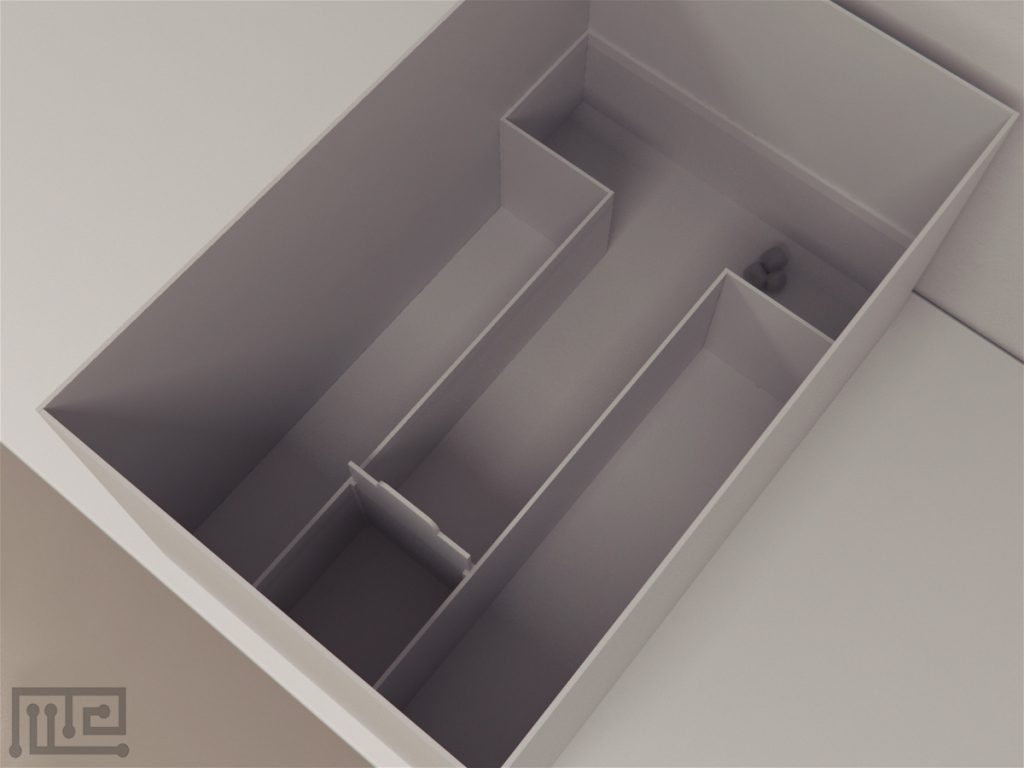 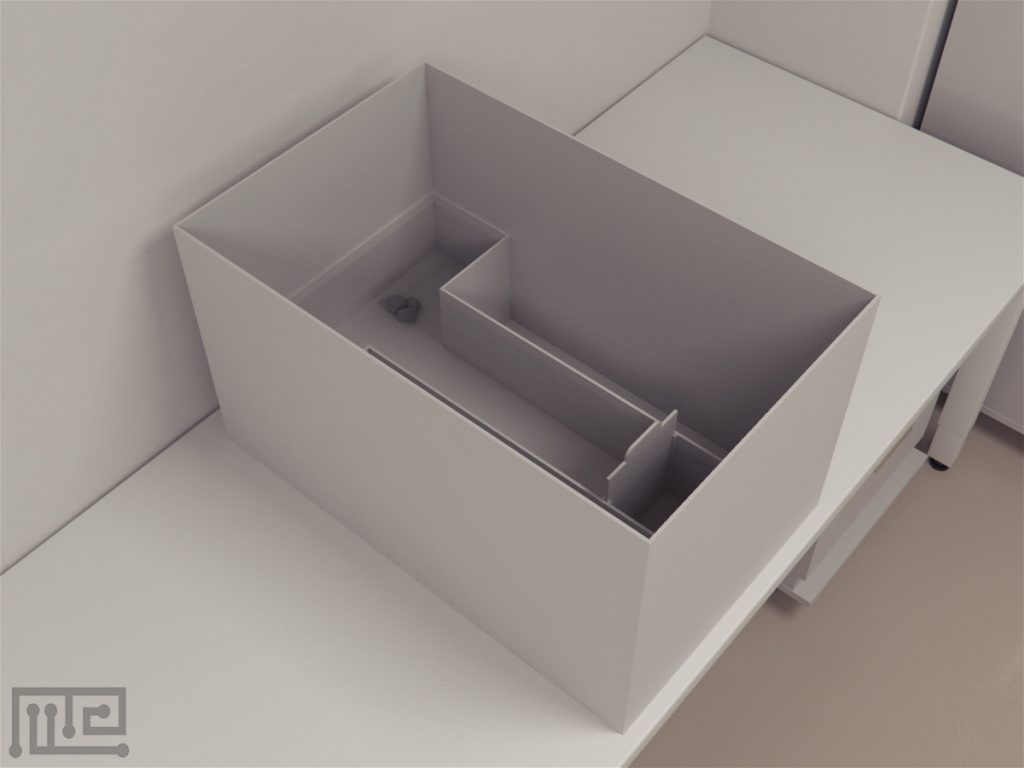 The Tilapia T-Maze is used to assess spatial learning and exploration in tilapia. It was created in an experiment by Mesquita Isabela F.A. et al. (2016).

The T-maze was made of white-opaque hard plastic. The maze was filled to with water and three pieces of gravel (1-1/2’ Minus Gravel – grey), signalling food location, were randomly allocated to the left or right arm of the maze prior to tests.

Fish were kept at the starting area with a closed removable door for 5 min prior to the trials. When the door was removed, the time that it took the fish to leave the starting point and fully explore both arms of the T-maze was measured.

Measurements also included time to leave the starting point (latency time), time at choice of the first arm entered, time taken to explore the arm (search time) and the time of first feeding (based on the time taken to ingest the first pellet).

Mazeengineers offer the Tilapia T-maze. Custom coloring and customization are available upon request.

The Tilapia T-maze is used to study learning and memory behaviors in Tilapias. It is an adaptation of the Rodent T-Maze and consists of a longitudinal arm that branches into two perpendicular lateral arms. Food rewards can be placed in the lateral arms of the maze, and associative learning can be assessed through the addition of a marker in the food reward arm.

Tilapias have been used as a model for research studies due to their ability to easily adapt to different environmental conditions as well as the fast rate at which they grow and reach sexual maturity (Schofield, Peterson, Lowe, Brown-Peterson, & Slack, 2011). The Tilapia T-Maze can be used to test the effect of brain lesions, diseases and disorders, and pharmacological manipulations on learning and memory behaviors in tilapias. Different testing protocols such as those testing the response to different colored choice arms or cues can easily be applied using the Tilapia T-Maze.

Further, tilapias are of economic importance and are usually reared in very large densities than that observed in the wild. The Tilapia T-Maze can be used to test the effect of different environmental variables such as temperature, salinity, and low oxygen, on learning, memory, and exploratory behaviors in tilapias. Additionally, understanding their social behaviors and other group related behaviors is important to their welfare. The maze is large enough to accommodate a couple of individuals and allow observation of social interaction and how social parameters affect task performances.

Other T-Mazes used to observe learning and memory behaviors in other animals include the Zebrafish T-Maze, the Pig T-Maze, the Hen T-Maze, and the Ant T-Maze.

The Tilapia T-Maze is placed in a glass tank (80 cm x 50 cm x 46 cm) and is made of white-opaque hard plastic. It has a longitudinal arm (62.5 cm x 17 cm x 20 cm) and two lateral arms (16 cm x 17.5 cm x 20 cm) that are joined together forming a T-shaped maze. The start arm contains a removable door at the starting end, which forms a compartment to hold the subject. The maze is filled up to 18 cm with water.

Change a percentage of the water volume daily, depending on the experimental needs. Clean the apparatus daily. Appropriately light the apparatus. A tracking and recording system such as the Noldus Ethovision XT can be used to assist with observations.

Acclimate the fish for 15 days prior to starting trials in the preferred experimental environment. Feed the subjects daily during the acclimation period.

In order to increase exploratory motivation, deprive the subjects of food 48 hours prior to trials. Select the rewarded arm and place food reward in it along with a marker (such as gravel, plastic figurine, etc.). Hold the subject in the starting compartment with the removable door closed for 5 minutes. Remove the door and allow the subject to explore the maze. Allow the subject to ingest the food reward. Conduct trials for 15 minutes. Conduct one trial per subject per day for 10 consecutive days.

Evaluation of the effect of environmental color in tilapias

Torres, da Silva Ferreira, de Souza e Silva, Mesquita, and Luz (2018) evaluated the effect of environmental color on the cognitive abilities of Nile tilapias (Oreochromis niloticus). Eighty-four Chitralada-strain tilapia underwent acclimatization for 15 days prior to starting trials. The subjects were randomly divided into six groups of 14 individuals (7 males and 7 females) and placed into six separate tanks. Three environmental colors were tested (black, blue, and green) with two tanks per color. The tanks were coated internally with vinyl adhesive of the respected color. After acclimatization, the experiment was performed, which was divided into two phases. Phase 1 included three T-mazes having colors corresponding to the three environmental colors. Fish pellets were placed at the end of a lateral arm, and a Lego tower was placed at the entrance of the same arm as a food marker. Phase 2 of the experiment was performed 15 days after phase 1 and was used to test the impact of environmental color change on learning. The maze color and the color of the acclimatization environment were interchanged. The black maze was replaced by the green maze, the blue was replaced by the black, and the green was replaced by the blue. The results indicated that all fish exhibited a decrease in latency time at the end of the training. Fish from all three environments had a significant reduction in latency time across trials in phase 1. However, latency time increased in phase 2 and then decreased with trials. During phase 1, fish from the green and black tanks exhibited shorter times in completing the task; however, fish from the blue tank exhibited oscillations in the time required to complete the task throughout trials. During phase 2, which involved the color change, fish from the blue environment displayed similar behavior as in phase 1. Fish from the black environment had an increase in the amount of time to complete the task, which decreased over trials and was then able to remember the learning acquired from phase 1. In contrast, fish from the green environment exhibited oscillations in the time required to complete the task and were not able to retain the information acquired from phase 1 throughout the training. The results from the visual markers revealed that the animals were not able to associate visual cues with food in any of the treatments.

Mesquita, Torres, and Luz (2016) evaluated the behavior of proactive and reactive tilapia (Oreochromis niloticus) in the Tilapia T-Maze. Forty-four tilapia underwent screening for stress coping strategies and were divided into groups of 4. The subjects were placed in a darkened settling chamber, which was separated from a lit area by a door. Olfactory cues (water in which commercial fish pellets were dissolved and filtered) were introduced into the water of the lit area using a Pasteur pipette. The door was then opened, and fish that emerged into the lit area in less than 3 minutes were considered as proactive. In contrast, the fish that stayed in the darkened chamber were considered reactive. It was observed that out of the 44 fish that were tested, 26 were proactive while 18 were reactive. The fish were further divided into four tanks: 2 proactive tanks and 2 reactive tanks. One fish tank for each coping strategy was used for T-Maze trials, while the other two tanks were left untrained for later testing. Nine reactive subjects and 13 proactive subjects were tested on the T-Maze. It was observed that latency to leave the starting point changed significantly for all fish with successive learning trials. The median latency time was 2.0 s, and the median search time was 10.0 s for proactive fish. In contrast, the median latency time was 3.0 s, and the median search time was 147 s for reactive fish. The reactive fish took a significantly greater amount of time to learn the task. However, proactive fish took a significantly greater amount of time to find food. Overall, subjects from both coping strategies were actively foraging and able to find food. However, proactive fish demonstrated more risk-taking behaviors. Phase 2 of the task involved pairing one trained fish from the T-Maze trials and one untrained fish from screening sessions. Twelve pairs performed the task following the same procedure as T-Maze trials. It was observed that in 11 out of the 12 trials performed with the proactive trained fish and proactive untrained fish pairing, the trained fish fed first. The trained proactive fish actively searched for food when tested individually; however, both the trained and untrained fish did not search for food when paired together. In eight out of nine trials involving trained and untrained reactive fish, the trained fish fed first. Similar to the proactive fish, the reactive fish did not search for food and concentrated their attention on each other when they were paired together. Both trained proactive and trained reactive fish displayed aggressive behaviors towards the untrained fish by raising their dorsal fin.

The following parameters can be observed on the Tilapia T-Maze:

The Tilapia T-Maze can be used to test learning and memory behaviors, exploratory behaviors, as well as social behaviors in Tilapias. Associative learning can be tested on the Tilapia T-Maze through the placement of a marker in the arm that holds the food reward. The maze can also be coated with different colored vinyl adhesive to test the effect of environmental color on task performance. The Tilapia T-Maze is large enough to adequately fit two subjects at a time to test the effect of the pairing of different subjects in the performance of the task.

Factors such as age, gender, and strain of the subjects may affect task performance. The motivation of the subjects is highly important in order to perform the task. Unintentional stimuli may interfere with the way the subject performs the task.