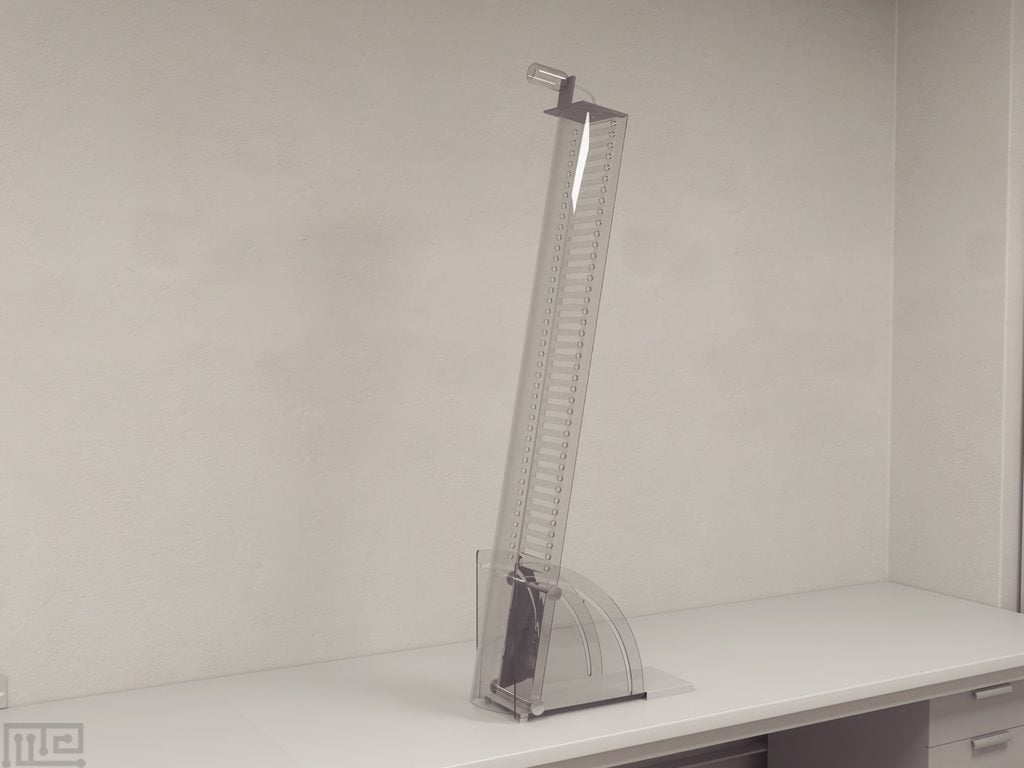 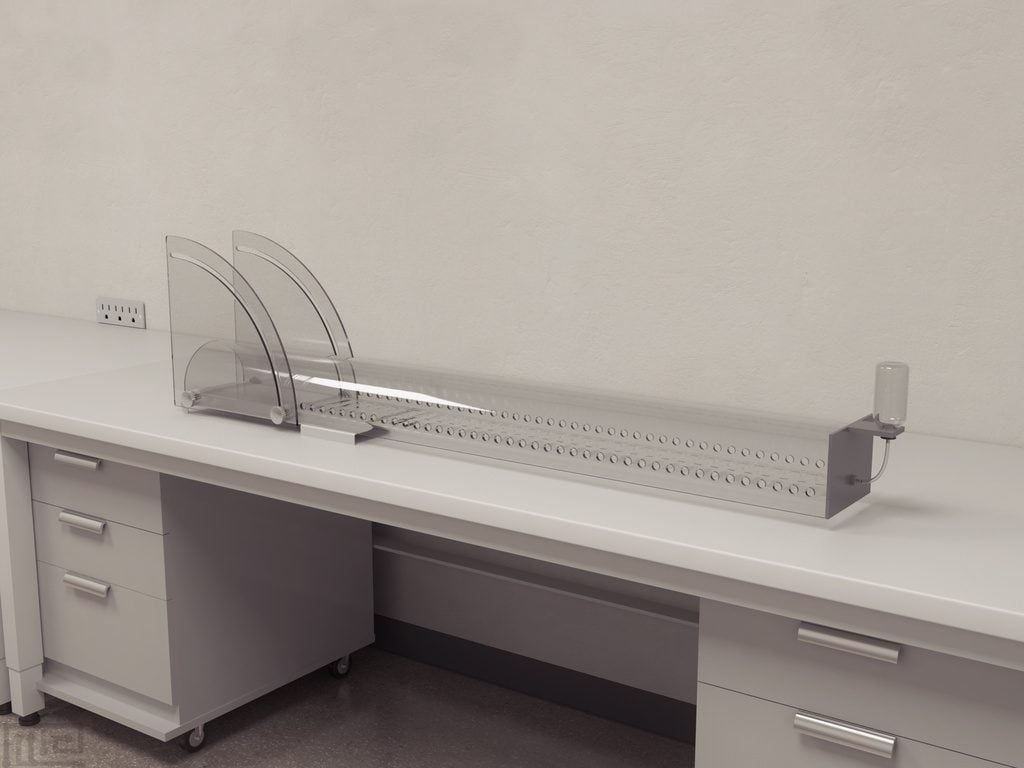 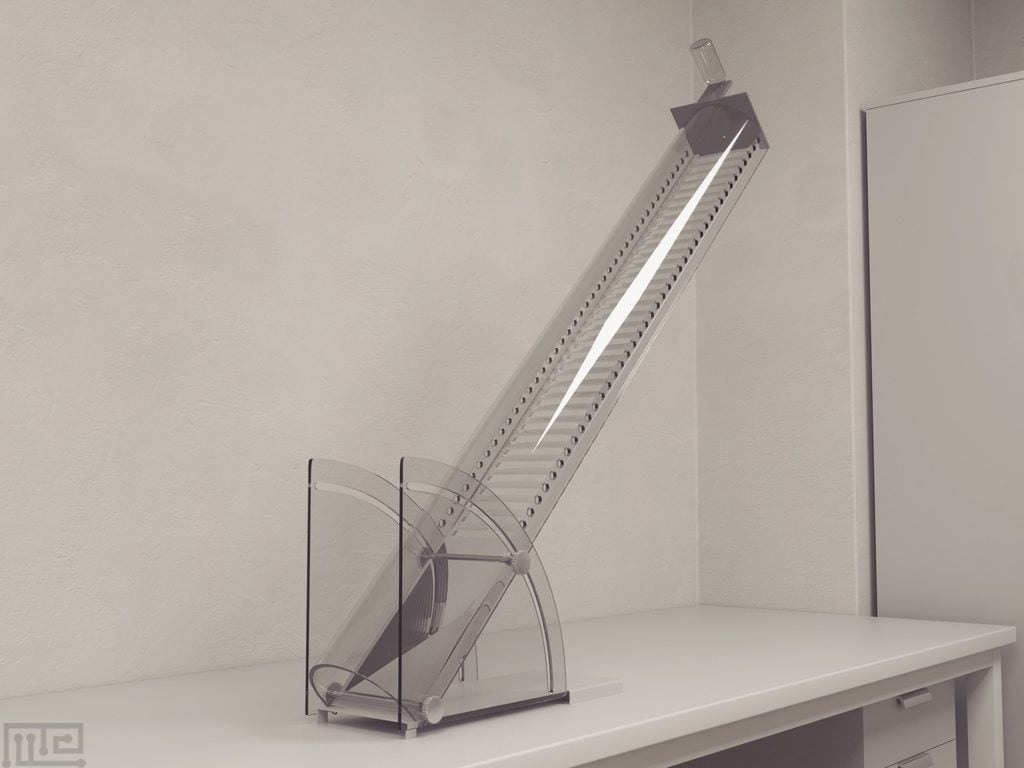 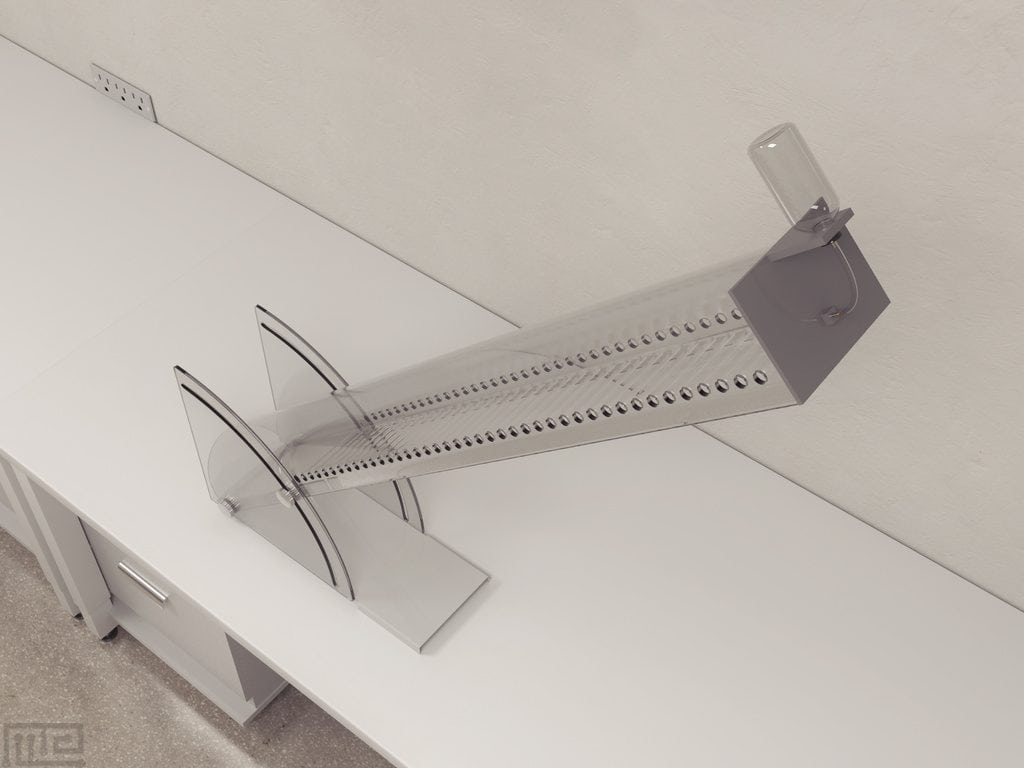 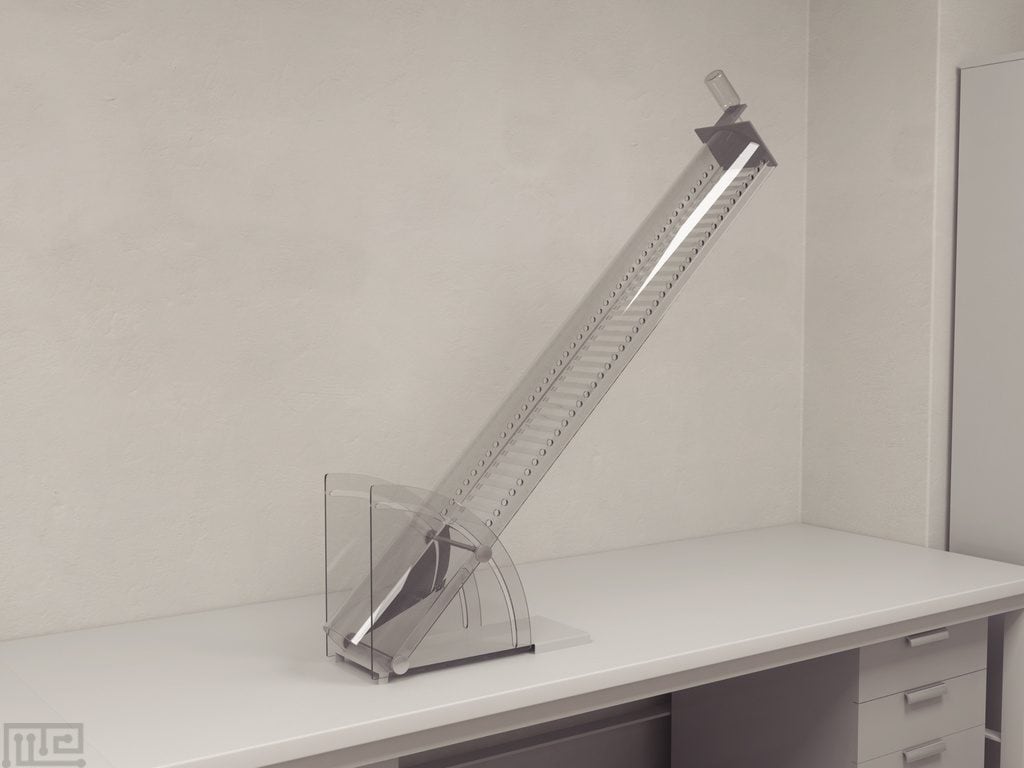 The rodent tilt ladder was originally described in the literature in 1989 in physiologic saphenous vein experiments, where rodents were kept in a tilt state. The tilt ladder can additionally be used in many other motor function experiments as it is combined with a ladder like grounding and moved to any angle needed to obtain a reward.

for social reward or aversion

This modification changes the water reward with a small chamber that can be filled with a single specimen to ilicit social reward.
Cost: $500

The Tilt Ladder was first described by Monos and colleagues in their 1989 paper that investigated the long-term tilt effect on the rat saphenous vein. The initial use of the apparatus was intended for studying the effects of static load leading to chronic adaptation of the vascular system. The design of the apparatus makes accessing the animals easy. This greatly assists in processes wherein catheters need to be accessed for processes such as pressure measurements.

The simple apparatus can also be used for the analysis of the motor function of an animal by subjecting it to different plane inclinations. The Tilt Ladder confines the subject within a tube-like runway that restricts it from turning around once it is placed in it. This forces the animal to traverse the ladder facing only one direction. Further, the inclinations add to the effect of gravity acting on the subject. Since the apparatus places the subject under a certain degree of restraint, allowing the animal rest periods becomes crucial for its well-being.

Other apparatuses used in the assessment of motor function and grip include the Horizontal Ladder, the Stairway Test, the Balance Beam, and the Rotarod.

The Tilt Ladder is constructed using clear acrylic. The apparatus is tube-like and has a length of 65 cm with an internal height of the 6 cm. The ladder has 45 removable rungs having a length of 13 cm and a diameter of 0.3 cm. The holes for the rung placement are positioned at 1 cm intervals to allow multiple patterns of bar positioning. One end of the ladder is connected to a pivot point that allows changing the inclination between 0 to 90 degrees. The other end is equipped with a food and water dispenser.

Clean the Tilt Ladder before and after the experiment to prevent any lingering stimuli from affecting the subject’s performances. Place the apparatus on a flat surface and ensure that it is appropriately lit. For tracking and recording of the experiment, a tracking system such as the Noldus Ethovision XT can be used.

Incline and lock the Tilt Ladder into position. Place the subject into the apparatus at the pivoted end in a head-up position facing the raised end. Secure the entryway to prevent the subject from escaping the apparatus. Provide the subject with enough food and water at the raised end. Subjects can be placed in the device for the duration required for the investigation. However, it is recommended that the subjects are given rest for at least 1 hour per trial or day by placing them in a large, normal cage for free movement and grooming. This is important to ensure the continued well-being of the subject.

Sprague-Dawley rats were subjected to an increase in hindlimb venous pressure using the chronic tilt method. The Tilt Ladder was positioned at an angle of 45 degrees. The subjects were individually placed in the set-up for a period of 2 weeks with ad libitum access to food and water at the raised end. A control group of the Sprague-Dawley rats were also placed in the same set-up without any inclination and served as the restricted controls. Another group of free-moving Sprague-Dawley rats maintained in standard cages without any inclinations served as the non-restricted controls for the experiment. Post 2-weeks treatment, subjects underwent removal of segments of saphenous vein and cannulation to evaluate the changes in the mechanical properties. It was observed that in tilted rats the internal pressure rose to 20 mmHg (from 0 mmHg) in the saphenous vein resulting in an increased mean external diameter of 772 ± 34 µm (from 567 ± 24 µm). However, the chronic tilt treatment did not affect the vessel wall thickness at zero pressure and its inverse response to increasing intraluminal pressure. Further, at 20 mmHg, a steep increase in the mean tangential wall stress was observed both in tilted rats and restricted rats. (Monos, Contney, Cowley Jr., & Stekiel, 1989)

The following observations are made using the Tilt Ladder,

The Tilt Ladder eliminates the need for surgical manipulations to induce static load. The apparatus is relatively non-aversive in nature in comparison to other ladder-styled apparatus and methods of load induction. It can also be used for the assessment of motor and locomotion functions of the animals. The design of the apparatus allows easy access to the animals. This makes accessing the indwelling catheters easy for processes such as attaching venous and arterial catheters to transducers for pressure measurements. The apparatus allows the flexibility of changing the plane inclination from 0 to 90 degrees. The Tilt Ladder also comes with provision for food and water dispenser; this ensures that the subjects emotionality and health are not affected during long periods in the apparatus.

The Tilt Ladder restraints the movement of the subject to a certain degree. This can potentially affect the subject’s stress levels. Therefore, it is important to allow rest periods during and between each trial to ensure the subject’s continued well-being. The subject’s performance may be dependent on its weight. Thus, it may be necessary to have a large cohort of similar weights to obtain reliable results. Factors such as age and sex can also affect performance. The subject’s own emotional and mental status can also influence the results.