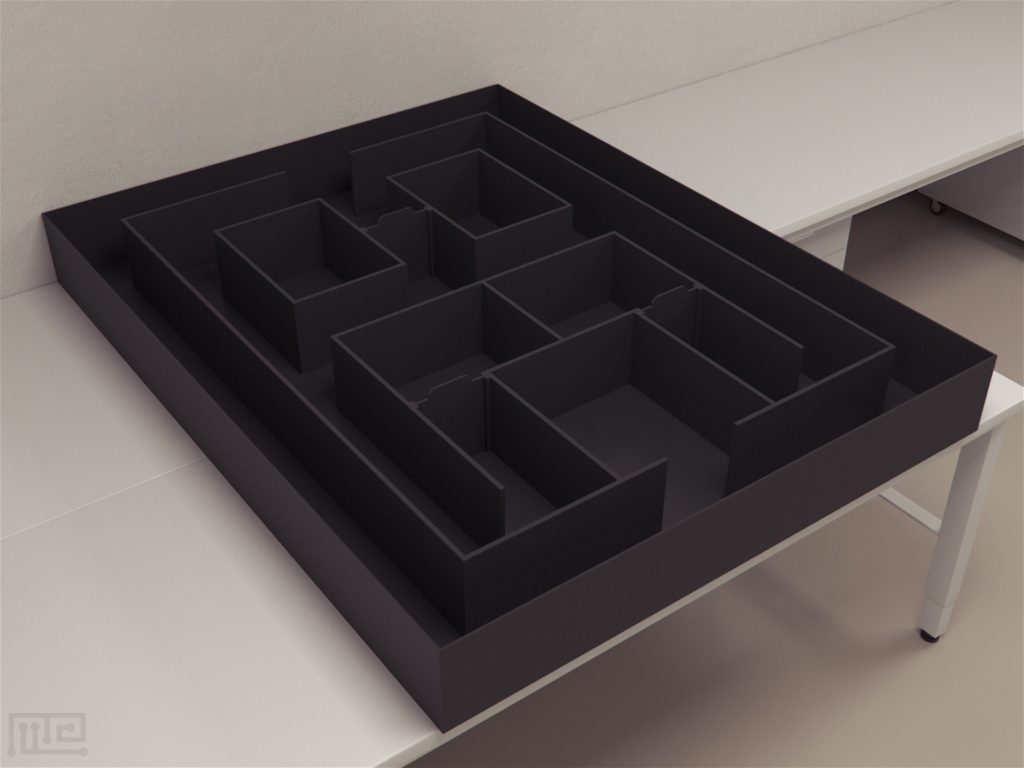 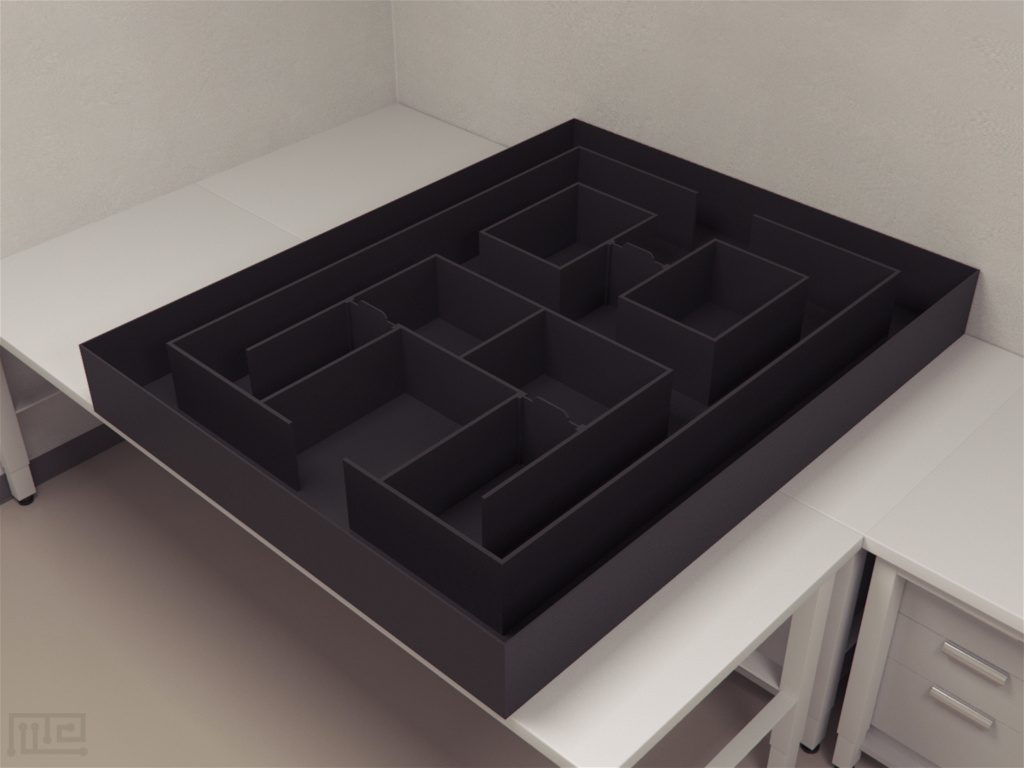 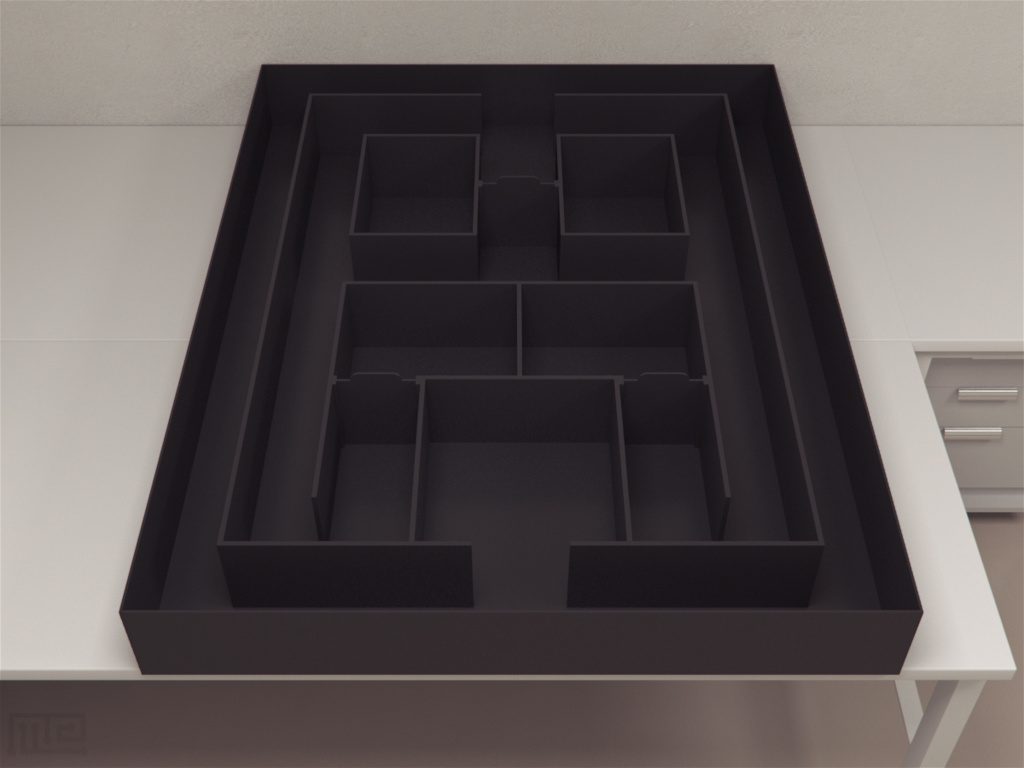 The original utilization of the Town maze was to study hippocampal place cells. Rather than a simple environment, the town maze provides a more urban like environment with two start locations, three alternate paths in the maze midsection, followed by a two-way choice that determines the trial outcome, which is access to a food reward. The MazeEngineers version of the Town Maze is sized for both mice and rats and can be ordered in a variety of colors.

Town maze is a navigational paradigm that mimics a busy urban town. It is used to study spatial-related brain signaling in animals. Developed by Tanila, Ku, Kloosterman, and Wilson (2017), the miniature town creates a milieu where the subject navigates similarly to humans in an urban environment. The target is to reach the goal without paying attention to buildings and blocks en route, except only to keep certain conspicuous landmarks and corners in mind.

The maze has corridors and winding alleys that are bordered by walls in a way buildings and stores border roads in an urban town. The aim is to obfuscate the distant view and make spatial memory and navigation challenging.

Spatial or navigational learning is a process controlled by hippocampal place cells in the brain. A place cell is a pyramid-shaped neuron that fires when the subject enters a specific location. It gives a sense of direction by forming a cognitive spatial map. Entry into a particular environment, called place field, prompts the place cells to fire and create place awareness and memory in the brain.

Town maze is the first of its kind maze to study characteristics of place cells in an urban-like environment. To date, it is the largest navigational paradigm employed to study hippocampal place cells in animals. Its geometry and multiple choice points make it a unique maze among others which either have a U- or T-shaped unit or complex elevated track.

The maze is divided into 11 logical segments divided by Start box, Goal, and Choice Points.

The process begins with cleaning of the apparatus with 70% ethanol and setting up in the recommended configurations. A video tracking camera (Noldus EthoVision® XT) is fitted at the top to capture animal direction and movement.

Prior to training, microdrive arrays carrying tetrodes are implanted in the subject’s hippocampus, and a reference electrode is inserted in the white matter of the brain under general anesthesia. The tetrodes record generation of action potential in the hippocampus against the local reference.

This is followed by a healing period of 1-2 weeks.

The subjects are housed individually and put on a diet restriction throughout the week except on weekends where ad libitum food supply is maintained. This will make the animals look forward to the weekly reward. However, water is freely available at all times.

The animals are then given Free Training Trial in which they are collectively placed in the maze to perform the task. Once the spatial learning develops, the difficulty level is increased by putting an opaque barrier in one or two paths of the mid-section maze. This is where the trail turns from Free to Barrier Trial.

Then two animals are chosen on the basis of best performance and least number of mistakes and trained in the Position Task where instead of starting from the start location, they are repeatedly made to choose lateral alleys as their chief pathways. This encourages full use of hippocampal spatial learning to navigate through the maze tasks.

Once animals show signs of learning, they are trained further by blocking all pathways but leaving just two opposite lateral pathways leading to the goal.

The experiment process involves putting the animal in the Goal chamber and allowing it to taste the reward (food) for one minute. Then it is moved to either the Right or Left Start chamber for 30 seconds where three pathways lead to the Decision Point. The animal has to decide between the right or the left turn.

If the choice is correct, it will effortlessly reach Goal in no time where a reward of four mini-pellets awaits.

A wrong choice will lead to a blind alley forcing the animal to backtrack to the Decision Point and pick the other lateral alley leading to the Goal. This will earn a reward of only one mini-pellet.

It is an established fact that CA1 place cells have only one small place field in a small environment but many in the large ones (Fenton et al., 2008). Because of its large size, Town Maze allows studying the patterns of field constellations that may otherwise go unnoticed in smaller test environments.

Study of Flexibility and Stability of Hippocampal Spatial Fields

Town maze allows the experimenter to bias the route selection by blocking one or two of the three parallel alternate paths in the maze mid-section. Such manipulations challenge the memory of the subject about the start location. The hippocampal cells (place cells and interneurons) respond to the introduction of barriers by changing the firing rate.

Tanila et al. (2017) conducted the memory task to test the ability of hippocampal place cells in real-life navigation through an urban environment. The experimenters were keen to investigate whether place cells updated spatial representations with a constantly changing environment. They also looked at the number and field-firing rate of neurons in response to the barriers.

The subjects were healthy male rats tasked to navigate through the town and reach the target by keeping the sense of direction and memorizing certain landmarks.

The endpoint was the discovery that each pyramidal neuron has more than one place fields for a given position.

Town maze makes a fair comparison between human and rodent’s place cells that code for landmarks and places respectively.

The following cases and errors are observed with every trial (in case of a right start):

In case of a left start, the corresponding paths would be mirror images of the above description.

The observed vs. expected number of neurons with 3–5 place fields for all points and cases are tabulated and compared.

Although the maze appears complex, it is linear, symmetrical and easy to assemble. The mid-section barriers allow ease of introduction and removal. Difficulty levels can be gradually increased providing tremendous insight into an animal’s memory and impromptu navigational strategies.

Despite being one of the largest rodent maze, the apparatus requires minimal handling and cleaning. It does not need rigorous cleaning after every trial.

The rodents receive surgical implantation of tetrodes prior to the training and procedure and require weeks of recovery.

The maze is complex; requiring tough and lengthy training. Only one or two subjects exhibit higher than average spatial learning limiting the number of rodents the experimenter can work with.

Because of its large size, the training can tire the animal and affect its performance over days. The hippocampal firing rate changes according to good or bad performance.