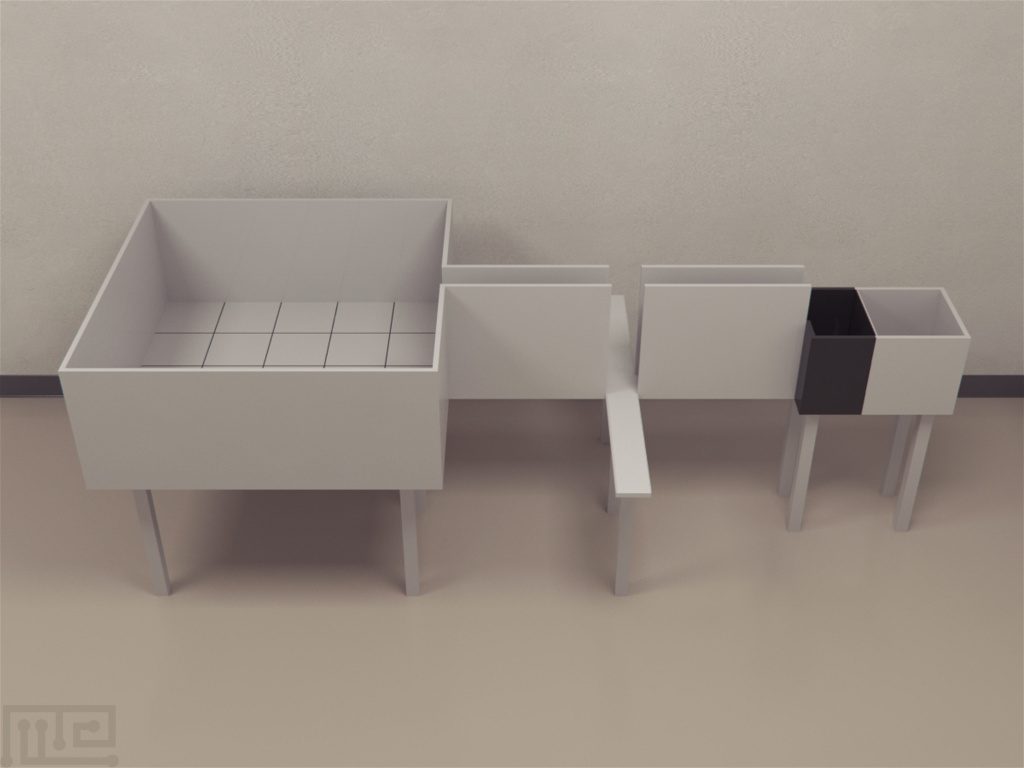 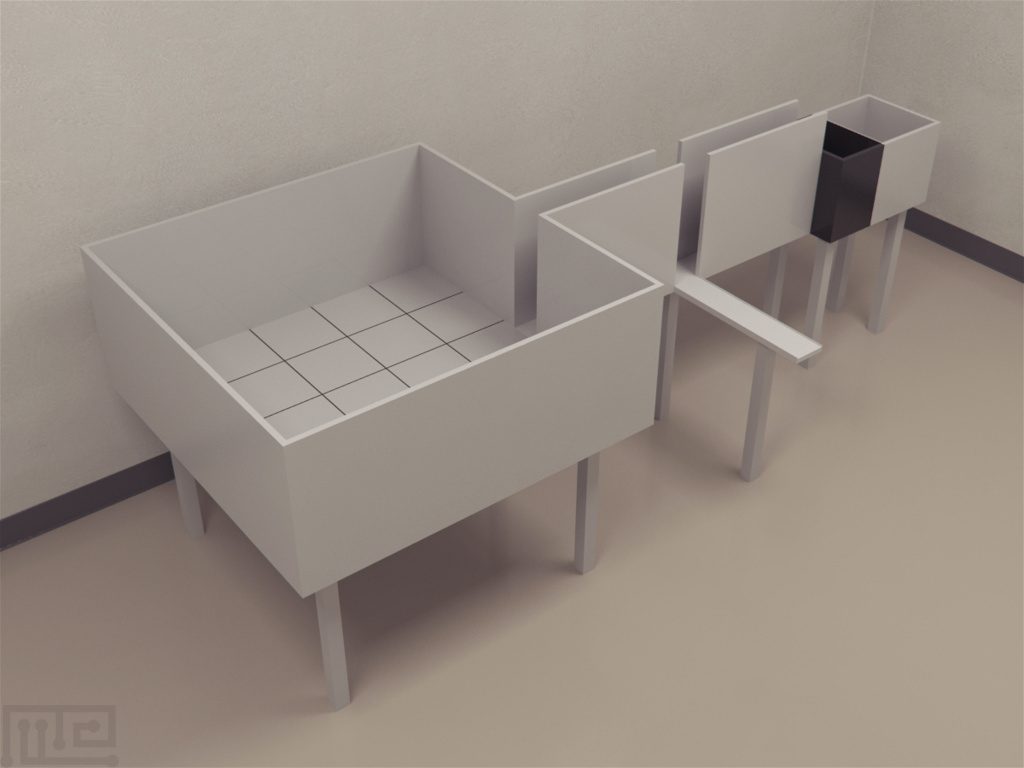 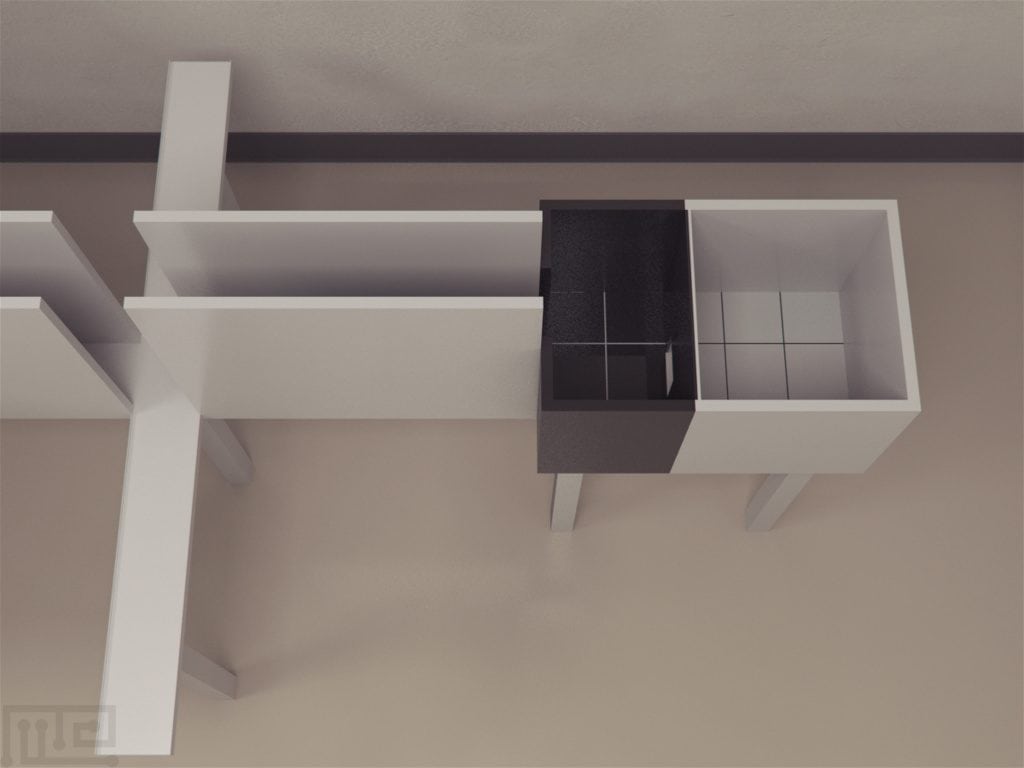 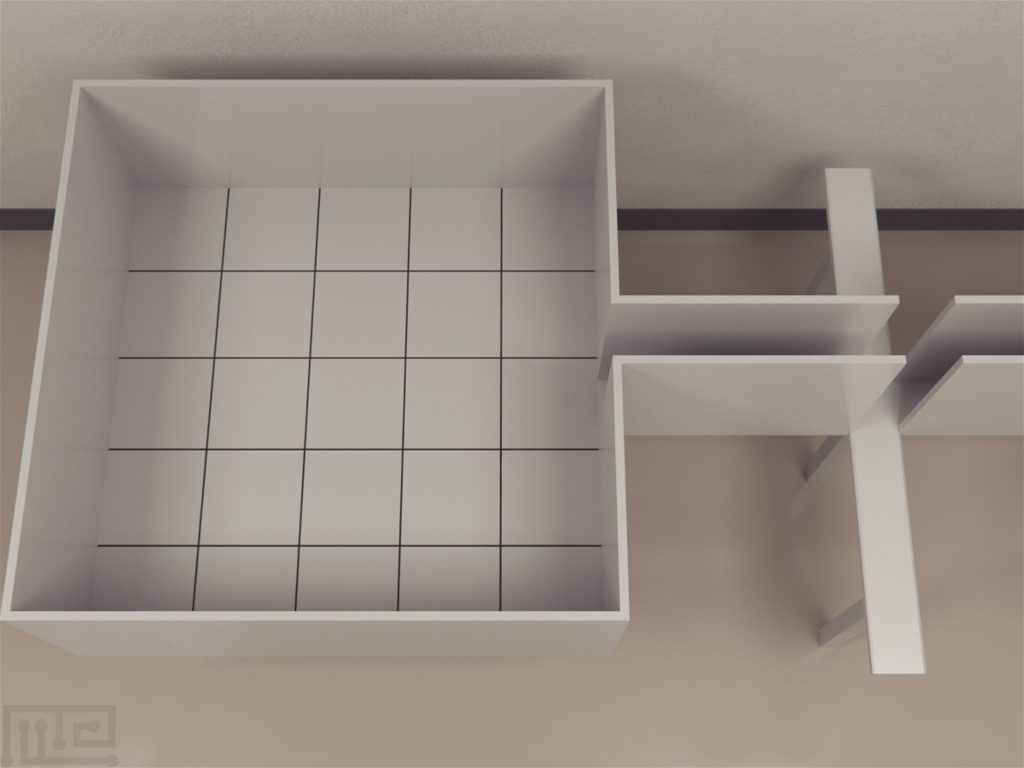 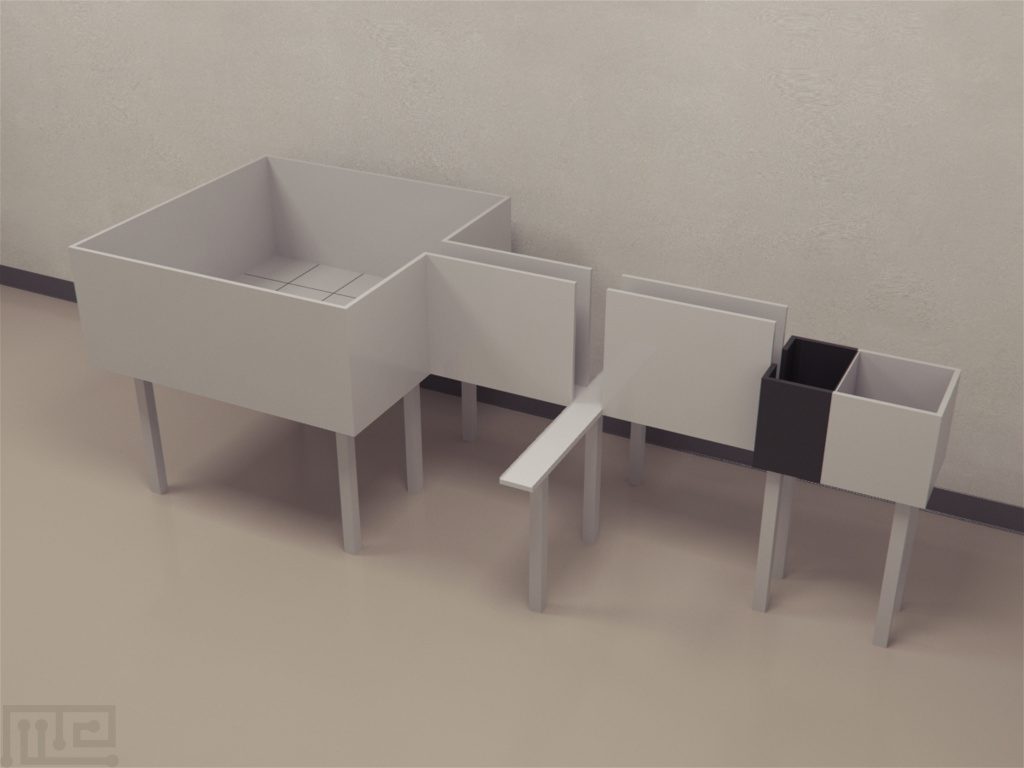 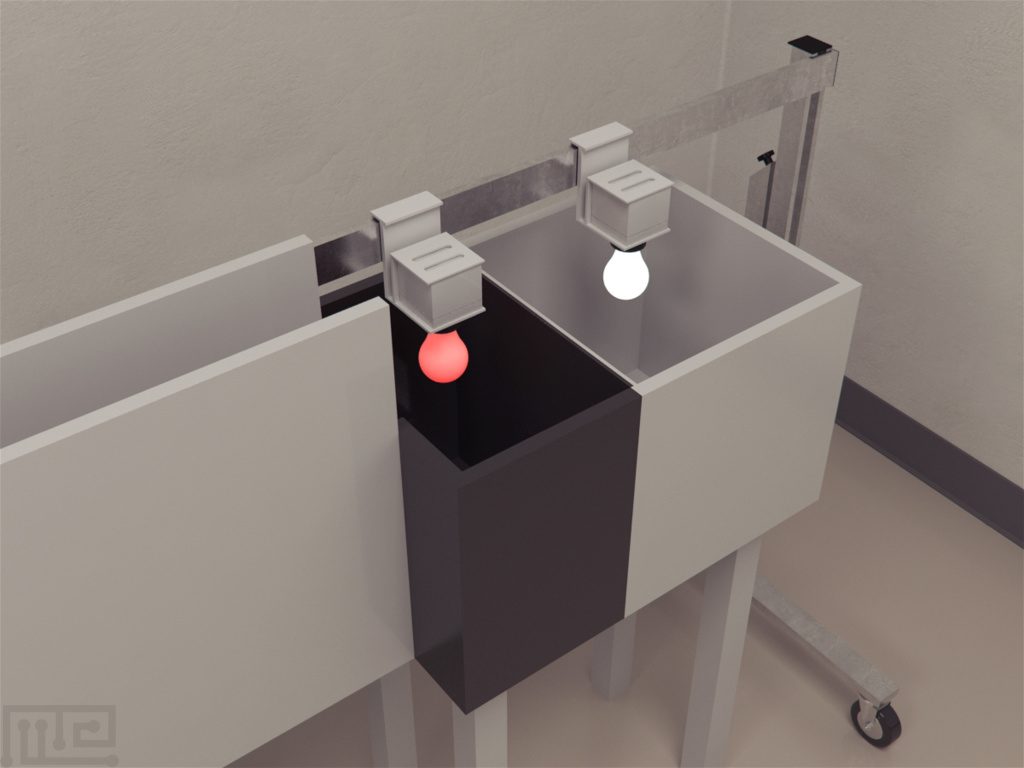 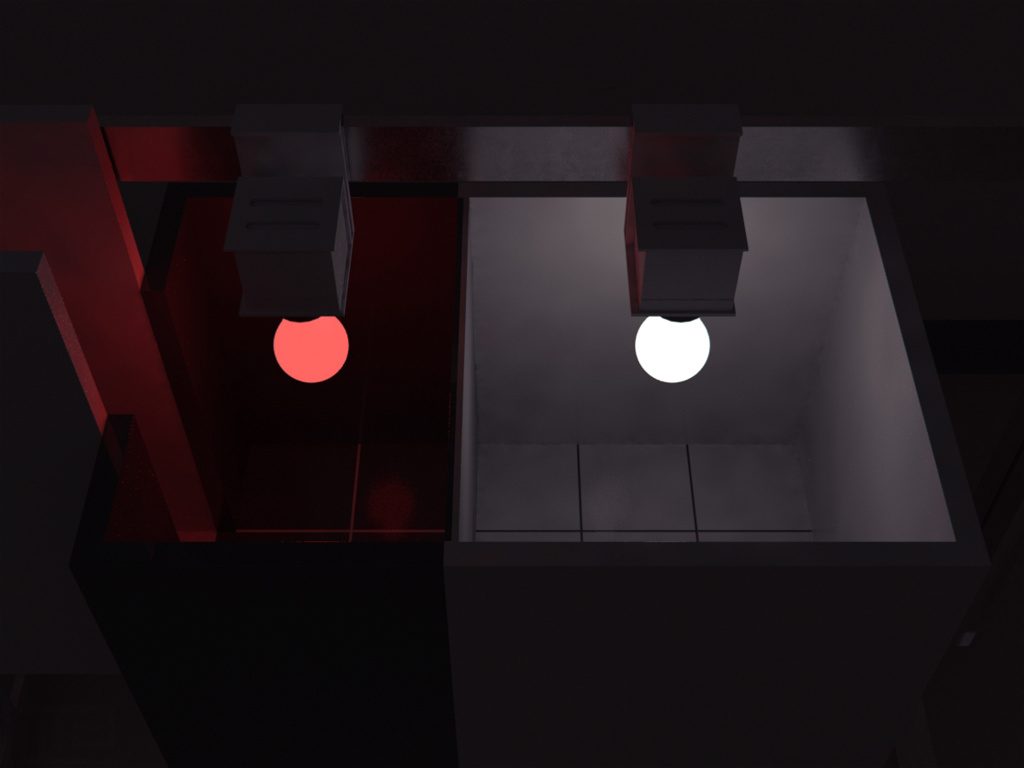 The Triple Test Maze is an integration of three well-known tests of anxiety/emotionality, namely the open field (OF), elevated plus maze (EPM) and light/dark box (LDB) originally described by Ramos et al. The apparatus  is available from MazeEngineers for both mice and rats to fit the original specified protocol. Modifications available upon request.

The Triple Test Maze proposed by Ramos et al. (2008) is a blend of three widely used behavioral devices, namely, the Elevated Plus Maze (EPM), the Open Field (OF) and the Light-Dark Box. They have been used extensively for the assessment of anxiety-related and exploratory behaviors. However, these tests are not sufficiently equipped to provide a complete and pure depiction of the subject’s emotional profile. Ramos et al. hypothesized that combining the three would allow assessment of a wider range of emotional and non-emotional behaviors within a single trial.

Researchers often use multiple behavioral batteries to obtain a thorough evaluation. However, use of multiple assays could influence the results of each test and also tends to be time-consuming (factoring in the inter-test intervals). Furthermore, treatment effects usually are not consistent throughout the variety of tests used. The Triple Test Maze, thus, provides a robust and reliable method of assessment of emotionality and explorative behaviors.

The Triple Test Maze is composed of three connected individual mazes; the Elevated Plus Maze, the Open Field, and the Light-Dark Box placed at the height of about 52 cm above the floor.

The Elevated Plus Maze is placed after the Open Field. The maze arms are 50 cm long and 10 cm wide. The arms are connected to a 10 x 13.5 cm central platform and two opposing arms are enclosed by a 40 cm high wall. The other two arms serve as the open arms and are surrounded by a 1 mm thick and 5 mm high ledge to prevent the subjects from falling.

The last in the row is the Light-Dark Box that consists of two compartments. The larger of the two measures 27 x 27 x 27 cm and is white with its floor divided into 9 x 9 cm squares by black lines. This compartment serves as the Light Box and is strongly illuminated using a 40 W white bulb. The smaller compartment is a black colored box having the dimensions 27 x 18 x 27 cm with white lines dividing the floor into 9 x 9 cm squares. This compartment serves as the Dark Box and is illuminated using a 40 W red bulb. The bulbs are placed 30 cm above the compartments. The compartments are separated by a wall that has 7 x 7 cm opening to allow movement between the compartments.

The test room is illuminated using a dim light. Recording and tracking can be done using an automated software such as the Noldus Ethovision XT. The apparatus is cleaned before and after trials to minimize the influence of any lingering stimuli.

Each trial lasts 15 minutes. The subject is placed in the center of the Open Field apparatus to initiate the experiments. The time and start positions were predetermined via pilot studies conducted by Ramos et al. (2008).

Male and female Lewis (LEW) and spontaneously hypertensive rats (SHR) were investigated for their anxiety-related behaviors on the Triple Test Maze task. The males and females were tested on alternate days in the Triple Test Maze for 15 min trials each. A significant effect of strain on the performance in the maze was observed. Females of both genotypes explored aversive environments more than the males. (Ramos et al., 2008)

The subjects were administered intraperitoneally (2 ml/kg) with 0.5, 5 and 10 mg/kg of Chlordiazepoxide (CDZ) suspended in 0.5% methylcellulose, 30 min prior to the experiment. Another group of subjects was administered intraperitoneally (1 ml/kg) doses of 0.1875, 0.375 and 0.750 mg/kg Midazolam (MDZ) dissolved in 0.9% saline. The subjects were tested for 15 mins in the Triple Test Maze. At the highest dosages, both drugs showed to have a significant effect on open arm preference. While CDZ treated subjects showed less preference for the Dark compartment at the highest dose, MDZ treated subjects showed no effect on preferences in the LDB. (Ramos et al., 2008)

The subjects were administered intraperitoneally (2 ml/kg) with 10 and 20 mg/kg doses of Pentylenetetrazole (PTZ) dissolved in saline (NaCl 0.9%) 5 min before the experiment. The controls received similar volumes of saline. The subjects were tested for 15 mins in the Triple Test Maze. PTZ treatment resulted in influencing all behaviors in the Triple Test Maze except for locomotion in the Dark compartment of the LBD. (Ramos et al., 2008)

The data collected in the Triple Test Maze is based on the variables associated with each maze component. These variables are as follows.

The following sample graph depicts the effect of PTZ treatment on the performance of the subjects in the Triple Test Maze.

The following sample graph depicts sex and genotype-based performance difference in the Light-Dark Box component of the Triple Test Maze.

The Triple Test Maze combines the three most commonly used anxiety-behavior evaluation apparatuses; the Open Field, the Elevated Plus Maze and the Light-Dark box, into a single unit. Thus, the integrated maze significantly cuts down the time requirements associated with each individual maze. The integration allows a rapid, comprehensive and reliable method of assessment of emotionality and explorative behaviors. The Triple Test Maze allows rapid pharmacological testing by eliminating the inter-test inconsistency that would occur if the tasks were performed separately in each maze.  Each component of the Triple Test Maze produces its own anxiety-related factor.

The test must be performed under optimized lighting conditions with minimum interference with the trials. Unnecessary movements or sounds near the apparatus may lead to freezing or the subject staying immobile during the trial. It is also essential to understand that there may be variations in performances of different strains and performances may be dependent on the age, gender and weight of the subjects used. Pre-exposure to the maze may result in test decay and altered behavior.