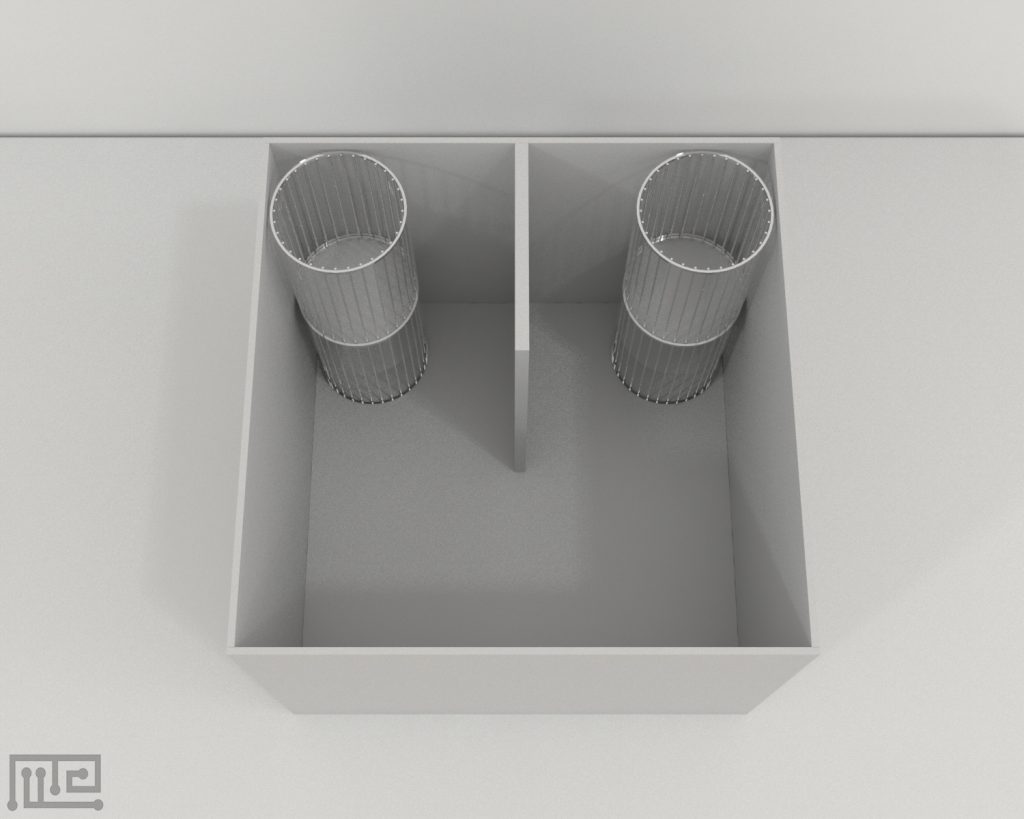 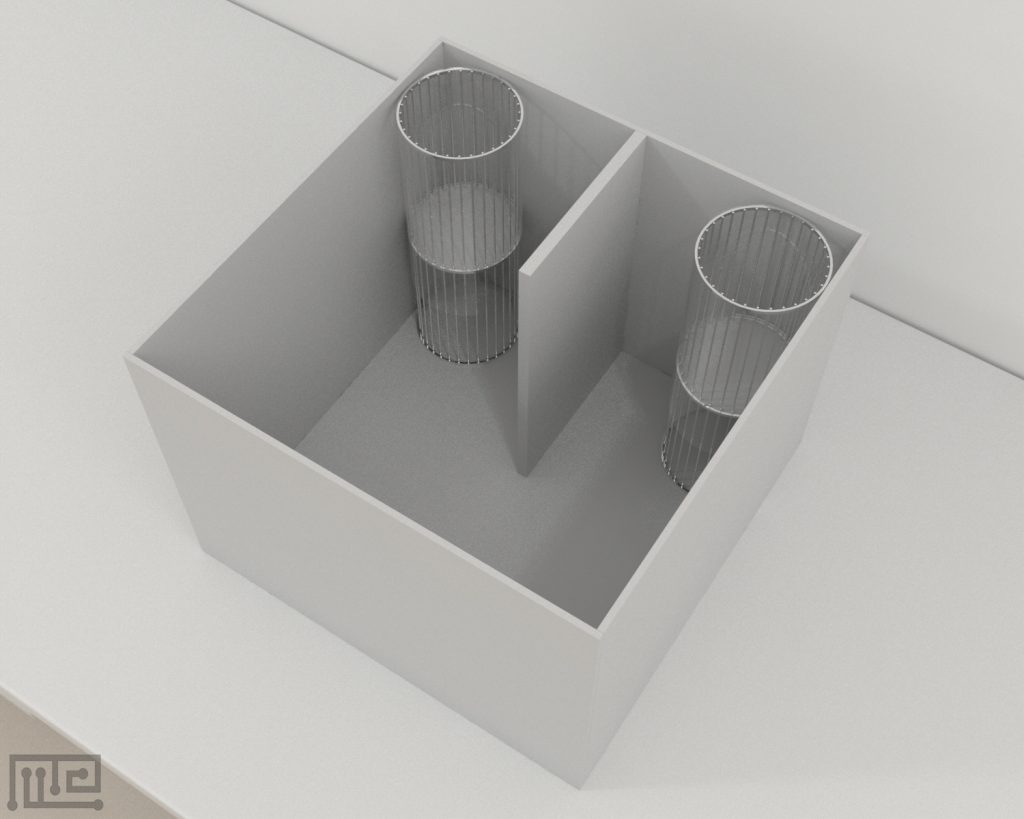 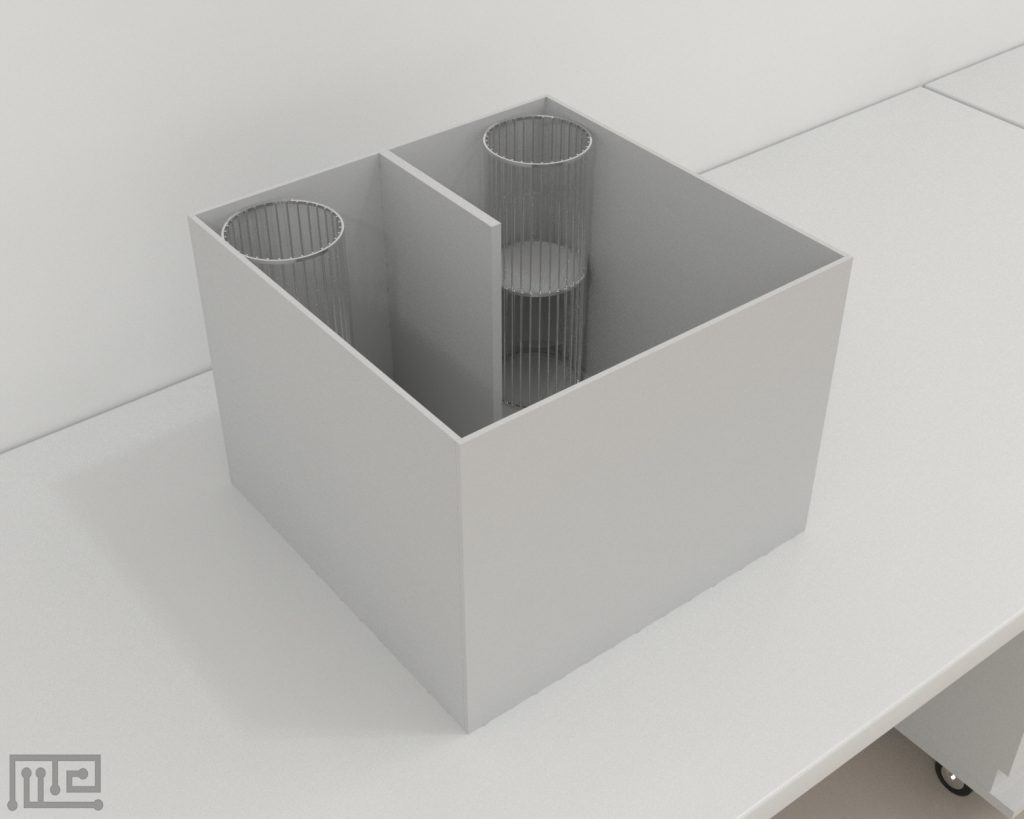 The U Shaped 2 Choice Field was used to read out behavioral states of sociability in rodents in an experiment by Eun-Hwa Lee et al.(2018). It can be used to measure animal’s behavioral responses to two contrasting orsimilar options, such as (i) a social target versus an inanimate object, (ii) a new stranger versus an earlier stranger, and (iii) a novel animal (a non-mate) versus a cage-mate (a familiar animal).

The U-shaped two-choice field is a modified open field that is partially partitioned with a wall to the central point, so that a ‘U-shaped’ field that contains two closed quadrants and two open quadrants of the same size is formed.

The U Shaped 2 Choice Field is a simple apparatus used to investigate social behavior in rodents. It is composed of a rectangular field partially divided through a wall projecting from one side of the field to the center, thus creating two open and two closed quadrants. The apparatus provides an opportunity to assess the subject’s social behavior and preference when provided with similar or different social targets. The U Shaped 2 Choice Field can be used to quantitate different social behaviors like social interaction, social novelty recognition and social preference to study symptoms and neuropathological mechanisms in mice models of depression, anxiety and autism, etc. (Lee, Park, Lee & Han, 2018, Moy et al., 2004, Kim & Han, 2016, Park et al., 2014).

Other apparatuses used in the evaluation of social behavior in rodents include the Sociability Chamber, The Social Reward Chamber, and the Visual Burrow System.

The U Shaped 2 Choice Field is composed of an open rectangular field measuring 45 cm in width, 45 cm in-depth, and 35 cm in height. This open field is modified by a wall (25 cm in width and 45 cm in height) that projects from one side of the field to the center, dividing the field into two open and two closed quadrants of the same size. The apparatus is also provided with two grid cages measuring 20 cm in diameter and 33 cm in height. The upper half portion of both grid cages are covered with a thin film, and they are partitioned from the center with an opaque white material to avoid climbing of subjects. The grid cages are placed in the outer corner of the closed quadrants creating a U shaped apparatus that provides two choices for the subjects. The apparatus is made of PVC, while grid cages are made of tungsten wire.

Clean the apparatus before each trail. Dimly lit the floor of the apparatus with indirect light. Mask surrounding auditory cues by 25db of white noise. Bring the subjects to the testing room 20 minutes before conducting the trial. Conduct each trail during daylight. A video and tracking software such as the Noldus Ethovision XT can be used to assist in observations.

Place an earlier stranger (social target from the sociability and social interaction task) in one of the grid cages, and place a new stranger in the other grid cage. Place the subject in the middle open space of the apparatus and allow it to explore both sides of the apparatus for 10 minutes.

The U Shaped 2 Choice Field is a simple and easy to use apparatus. It does not require extensive pretraining of the subjects, exposure to aversive stimuli, or food/water retention. The walls of the apparatus are opaque. They impose minimum stress on the subjects. The easily detachable walls and grid cages make it easy for cleaning. Multiple social behavior tasks can be performed using this apparatus.

Improper handling, age, gender, the strain of the subject, and intensity of the light may affect task performance in the U Shaped 2 Choice Field. The presence of spontaneous stimuli may alter task performance.

Request an U Shaped 2 Choice Field