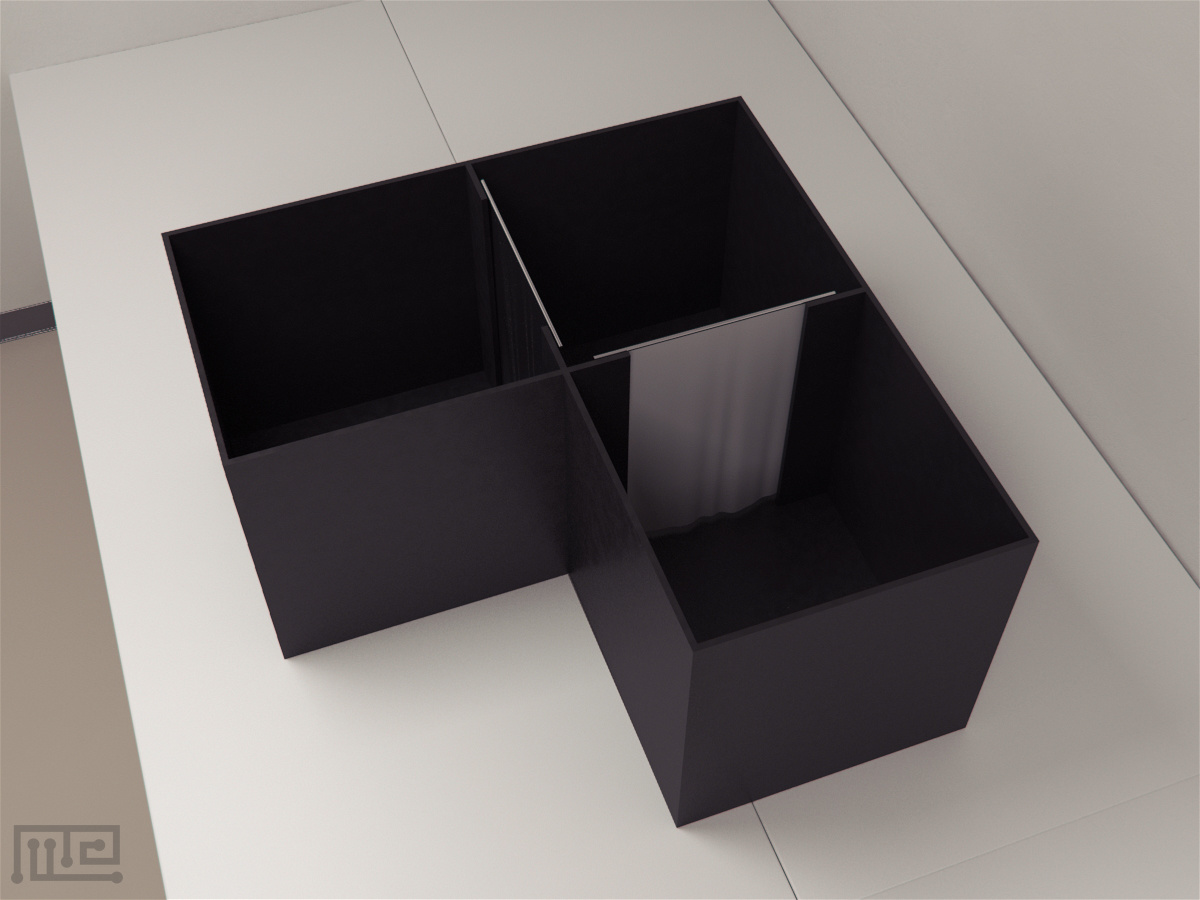 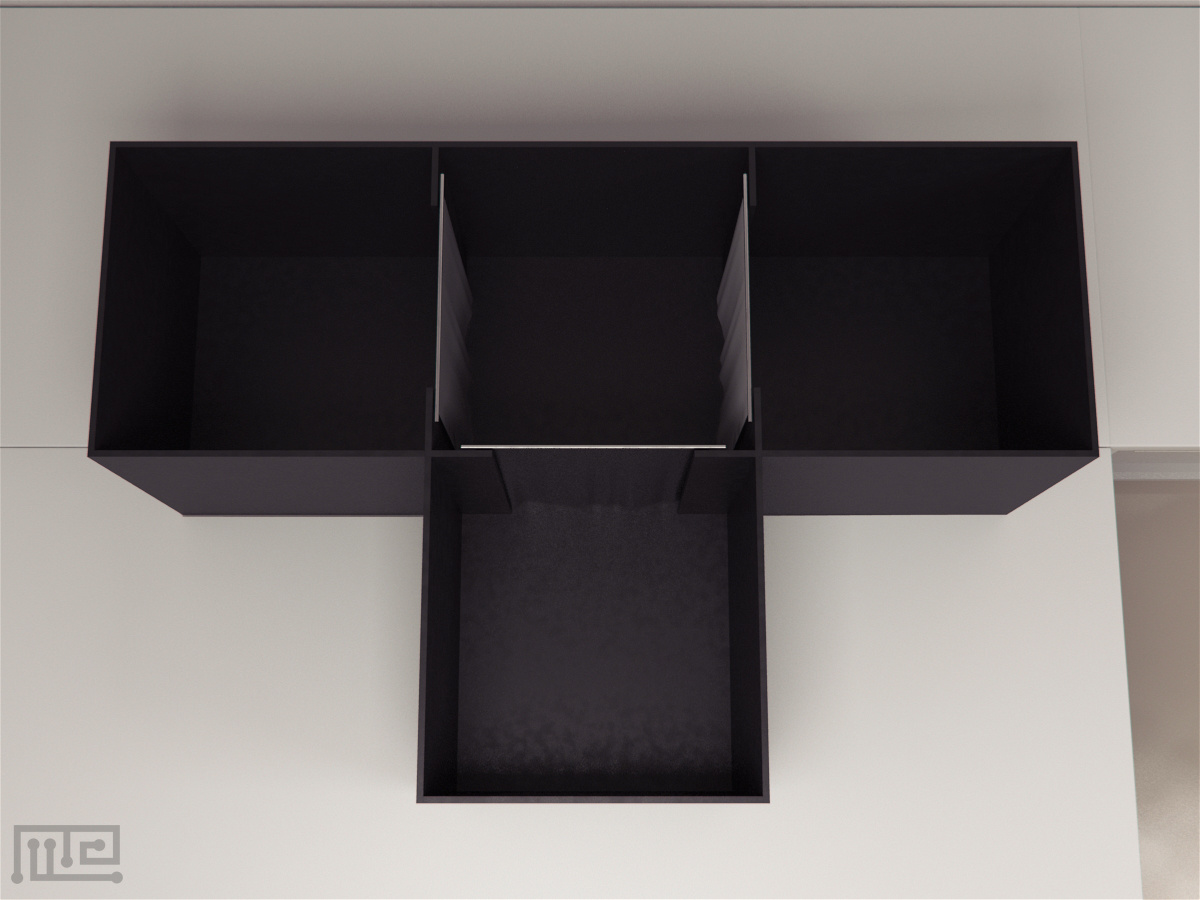 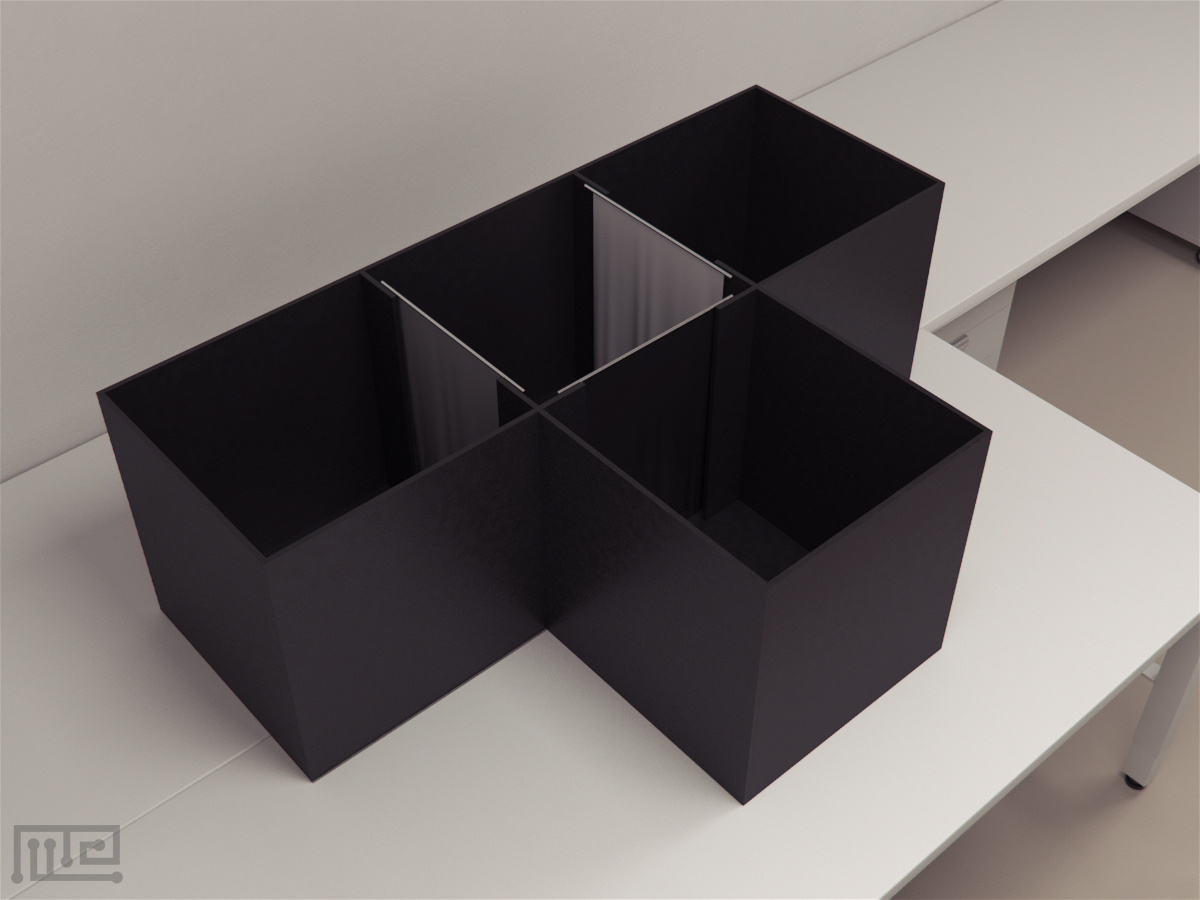 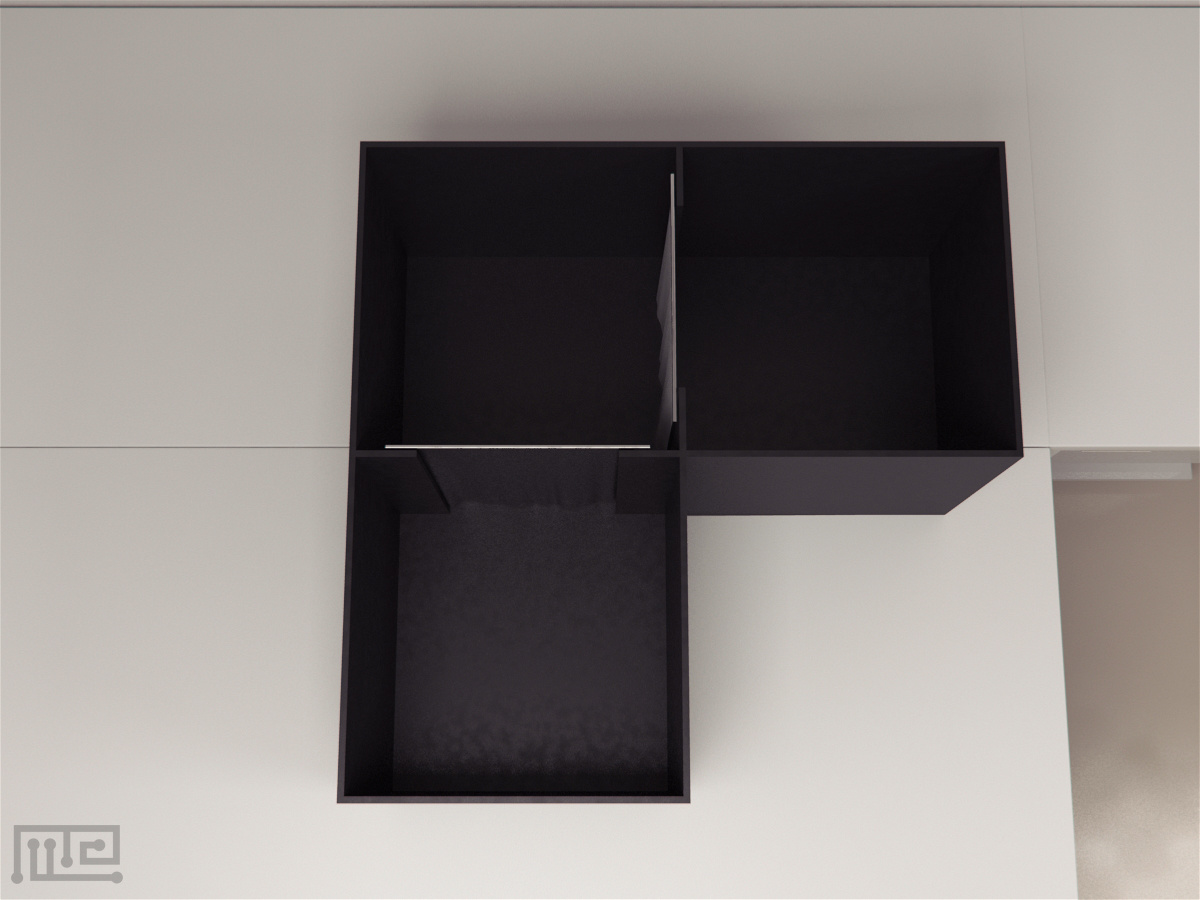 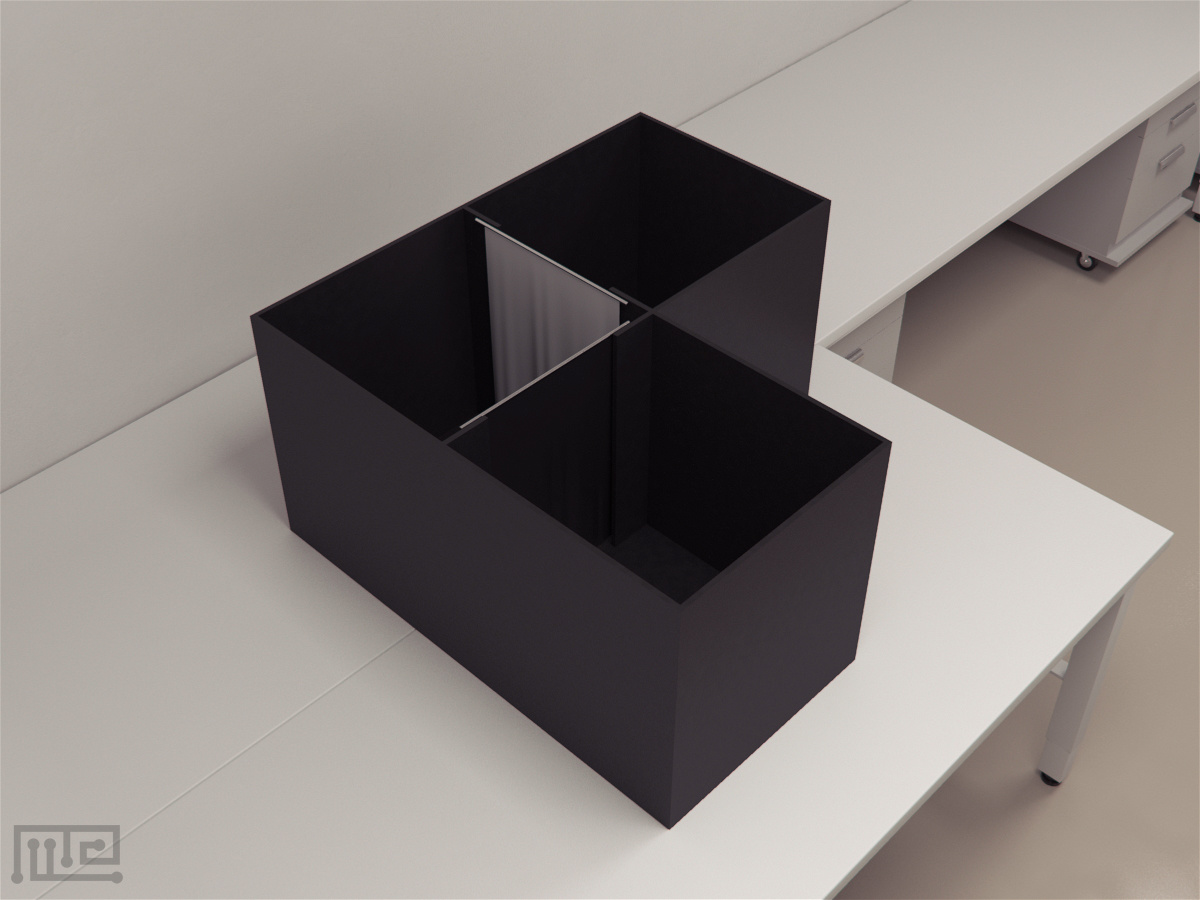 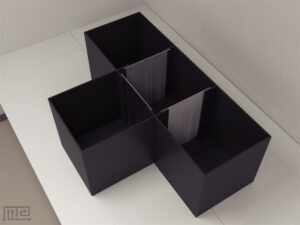 The Visual Discrimination Chamber is a non-spatial apparatus used to study discriminative learning and decision-making abilities in rodents.

The Virtual Discrimination Chamber consists of three boxes arranged in an L-shape. The central box serves as the start box and has entryways in the side walls that lead to choice boxes. The entryways are covered with different colored curtains (black, white or grey) that serve as the visual cues in the task. The apparatus can be customized to have three choices by addition of a choice box forming a T-shaped formation. Each choice box comes equipped with a food cup to hold rewards.

Mazeengineers offers Virtual Discrimination Chamber for both mice and rats. Custom coloring and customization are available upon request.

The Visual Discrimination Chamber is a non-spatial apparatus used to study discriminative learning and decision-making abilities in rodents. The task utilizes reinforced learning based on the association of reward with visual cues rather than the use of spatial strategies. Thus, the task does not necessarily rely on the hippocampus.

The side-to-side head movement known as vicarious trial and error (VTE), is often observed in rodents that are confronted with two pathway choices. This behavior is associated with hesitation or conflict of choice in discrimination learning and has been linked with learning efficiency (Meunzinger, 1938). Hu, Xu and Gonzalez-Lima’s (2006) investigation of VTE behavior using a Y-Maze task showed that the more VTEs the rats showed, the better the performance was in the visual discrimination task. Hu et al.’s study also suggested a possible role of the hippocampus in the observed VTE behavior. The Visual Discrimination Chamber’s non-spatial set-up eliminates the need for spatial learning and purely focuses on choice making.

The Visual Discrimination Chamber consists of chambers that can be arranged in either L-shape or T-shape. In either formation, one box serves as the start box and has entryways to the choice boxes on each connected side. The conventional L-shaped apparatus’ difficulty level can be enhanced by the addition of another choice box to the formation. The apparatus comes with different colored curtains that cover the entryways of each choice box. Other apparatuses also used in assessing rodent behavior include the Puzzle Box, the Barnes maze and the Y-maze.

The Virtual Discrimination Chamber consists of three boxes arranged in an L-shape, each having a height of 52 cm and a width of 49 cm. The central box serves as the start box and has entryways in the side walls that lead to choice boxes. The entryways are covered with different colored curtains (black, white or grey) that serve as the visual cues in the task. The apparatus can be customized to have three choices by addition of a choice box forming a T-shaped formation. Each choice box comes equipped with a food cup to hold rewards.

Clean the device before and after usage. Observation and recording of the movements of the subjects can be done using a tracking device such as the Noldus EthoVision XT. Train the subjects during their light cycle.

Perform reinforcement training in a two-choice set-up. Place the subject in the center box in the corner opposite the curtains. Choose either the black or the white curtain to serve as the visual cue for the reinforcement. Place food reward in the chamber associated with the reinforcing curtain. Do not place any reward for the non-reinforced curtain choice.

Performances can be evaluated either in a two-choice or three-choice set-up. Place the rats in the center box in the corner or side opposite the curtains. Place reward in the chamber behind the reinforced curtain. Do not place reward in the other chambers. In order to prevent the use of spatial strategies, switch the position of the curtains in a pseudo-random order during trials while maintaining reinforcement contingencies. Perform about 16 to 20 sessions.

Evaluation of the role of the hippocampus in discriminative learning

Bett et al. (2012) studied the effect of hippocampal lesions on discriminative learning behaviors. Twelve male Lister Hooded rats were first pre-trained on a Double Y-Maze following which they were divided into either sham group or lesion group. The lesion group rats underwent a hippocampal lesion surgery.  Following surgical treatment, the subjects were first evaluated on the Double Y-maze task followed by evaluation in the non-spatial Visual Discrimination Chamber. The results from the double Y-maze apparatus showed that compared to the sham-lesioned rats, animals with the hippocampal lesion surgery exhibited consistent impairment in the spatial reversal task. Performances in the visual discrimination task showed that both groups were able to acquire the two-choice visual discrimination task across all 20 training sessions without any significant difference between results. Additionally, both groups showed more VTE behavior in initial trials compared to the subsequent sessions. Lastly, the addition of a third-choice box resulted in increased VTE’s across both groups; However, the sham lesion group’s performance decreased possibly due to attempted use of spatial strategies, while the lesioned group showed more correct choices.

The following data can be analyzed by using the Visual Discrimination Chamber:

Record a choice if the subject enters or pokes its entire head through the curtain. Record a VTE if the subjects alternate looking from one curtain to another.

The Visual Discrimination Chamber can be used to evaluate VTE behaviors and discriminative learning resulting from lesions, different treatment conditions, and diseases. The non-spatial design of the apparatus forces the animal to carry out VTE behavior. The apparatus can be modified from a two-choice task to a three-choice task. The apparatus has a very simple design which places minimal stress on the subject. Subjects with hippocampal lesions benefit from the inability to use spatial information and therefore readily use the visual discrimination stimuli to identify the reward. The curtains are detachable which allows their positions to be switched allowing variations in task protocols.

Factors such as the species, number of boxes, enthusiasm to look for reward and type of brain lesion can affect the Visual Discrimination Chamber performance. Assessment of VTE in rodents can be affected if left out odors and depositions aren’t completely removed. Subjects that undergo surgery before being assessed on the apparatus can show irritation or disturbed behavior which can affect the results. Rats with deficient vision and motor function may not be able to perform the task as intended.