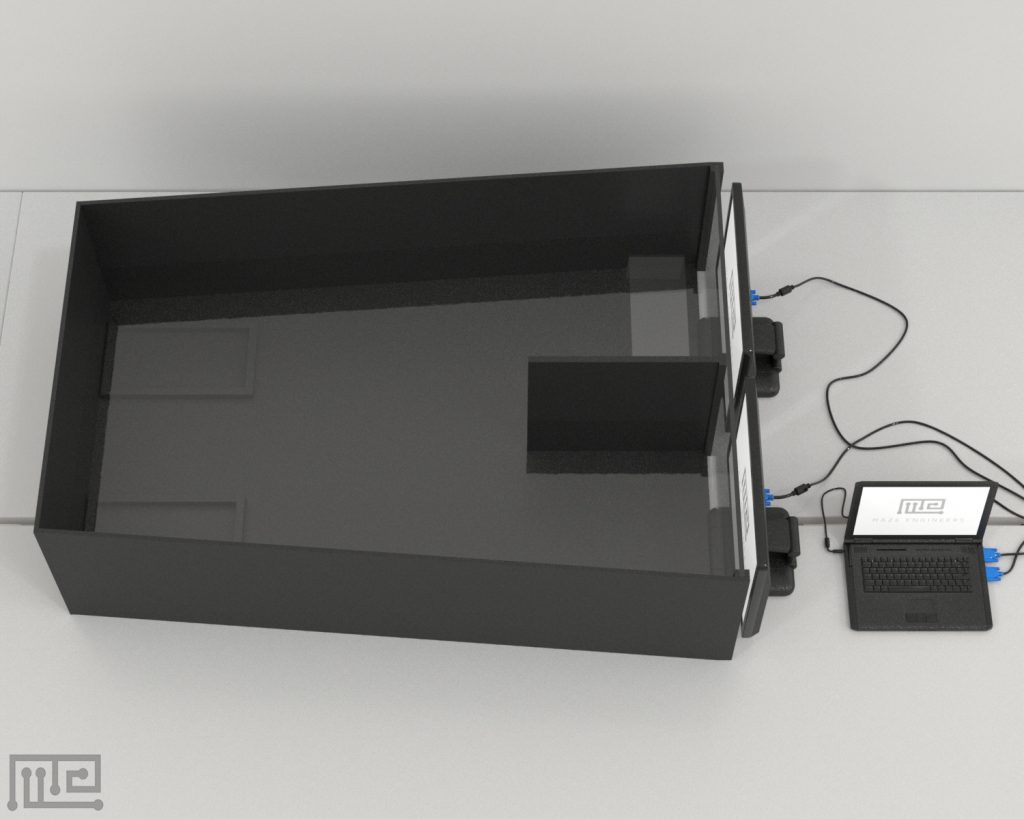 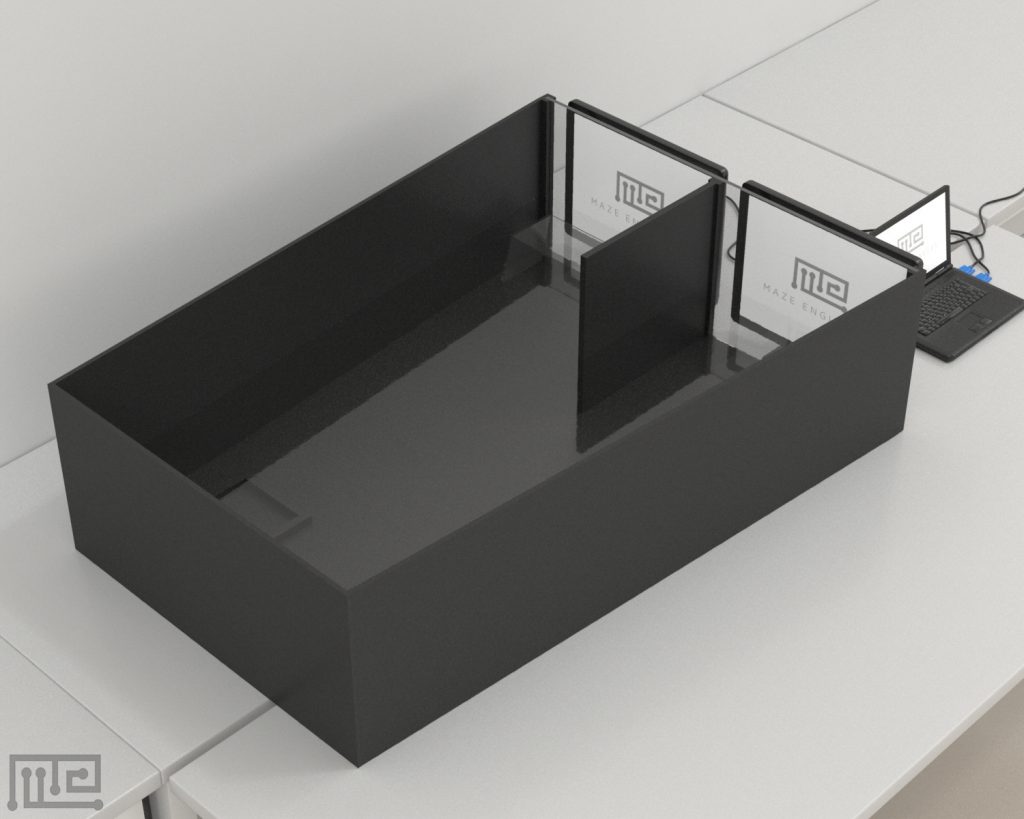 The visual water box is used to study learning and memory behaviors in rodents when presented with a visual stimulus. It consists of a trapezoidal-shaped pool that is partially divided on one end creating two arms. At the end of each arm, a computer monitor is placed which displays visual stimuli.

The visual system has been widely used as a model to study different brain functions. Behavioral tasks allow understanding of the interaction of the visual system with other brain systems and can quantitively measure visual ability (Wong & Brown, 2007). The visual water box relies on the visual system of rodents and also exploits their natural inclination to escape from water by providing a hidden platform. The animals are tasked with associating the visual cue with the correct arm in order to reach the platform.

The visual water box can be used to evaluate different learning behaviors in rodents using different experimental protocols. Furthermore, the visual water box can also be used to evaluate the effects of diseases and disorders, brain lesions, and pharmacological manipulations on learning and memory. Other similar apparatuses used in the evaluation of learning and memory in rodents include the Visual cliff test and the Morris water Y-maze.

The visual water box is a trapezoidal-shaped pool having a length of 140 cm and a depth of 40 cm. The narrow end of the pool is equipped with a release chute measuring 35 cm x 7 cm x 20 cm. The wider end of the pool is divided by a 41 cm long and 40 cm high opaque midline divider. Each half is equipped with a 43.2 cm computer-controlled monitor. The apparatus also comes with an escape platform measuring 37 cm x 13 cm x 14 cm that serves as the hidden platform.

Apply appropriate overhead lighting to the apparatus. A tracking and recording system such as the Noldus Ethovision XT can be used to assist with observations.

Display a low-frequency sine-wave grating of ~ 0.12 cycles/degree on one screen and a homogeneous gray on the other screen. Place the platform under the screen that displays the grating. Let the subject enter the visual water box through the release chute and locate the platform. Remove the subject from the box when it climbs onto the hidden platform or enters the arm with the gray screen. Randomly alternate grating and platform position in succeeding trials. Conduct trials until animals have achieved 80% of correct choices over 20-40 trials.

Display a low-frequency sine-wave grating on one screen and a homogeneous gray on the other computer screen. Place the subject in the release chute and allow it to find the platform under the grating. If a correct choice is made, increase the spatial frequency of the stimulus by adding one cycle to the stimuli on the screen. Continue this procedure until an error is made. Once an error occurs, run additional trials until four correct responses are made in sequence, or seven correct choices are made in a block of ten trials. After trials covering approximately half of the animal’s projected threshold are completed, increase the minimum number of trials to three, and then again increase it to four around three-quarters of the projected threshold. Test mice in groups of five to six in a session of ten interleaved trials. Conduct each session for 45-60 min. Perform a maximum of three sessions per day for mice and up to 15 sessions for rats. A final threshold estimate is generated in 2 or 3 days with about 60 trials for mice, and 150 for rats.

Evaluation of visual acuity in mice and rats

Prusky, West, and Douglas (2000) conducted a behavioral assessment of visual acuity in mice and rats on a Visual water box. For the training phase, the mice and rats were required to distinguish the low spatial frequency sine-wave grating (~0.12 cpd) from a homogenous gray screen. Accuracy of task performance was maintained at 70% of correct choices. Both animals performed at or near chance during the first trial block. However, after two to three more blocks of training, a near-perfect performance was achieved, indicating that both animals eventually learned the task.  The testing phase included small incremental changes in the spatial frequency of the stimulus between successive blocks of trials until the ability of animals to distinguish a grating from gray fell to chance. It was observed that there was consistency in the acuity of animals within a species. The average acuity of mice was 0.49 cycles/degree, while the average acuity of rats was 0.94 cycles/degree.

Evaluation of age-related changes in visual acuity, learning, and memory in mice

Wong and Brown (2006) tested age-related changes in visual acuity, learning, and memory in DBA/2J and C57BL/6J and congenic B6. mpc1d and D2. mpc1b strains of mice. In addition to the Visual water box, mice were also tested on a Morris water maze and olfactory discrimination learning task. The Mice were of 6, 12, 18, and 24 months of age. When the mice were tested on the visual water box, it was observed that performance was dependent upon the age and strain of the subjects in visual detection, pattern discrimination and visual acuity in the four strains of mice. It was found that C57BL/6J and B6. mpc1d strains performance improved with age, while DBA/2J and D2. mpc1b strains performance got worse with age, in spite of both strains having the same practice. Age-related strain difference was also seen in the Morris water maze. Although at 6 months of age, there was no strain difference seen in the performance of the task, the difference in task performance was seen in 12, 18, and 24 months of age. The DBA/2J and D2. mpc1b mice had longer latencies and swam a greater distance to find the platform than the C57BL/6J and B6. mpc1d mice. Strains did not differ in performance in the olfactory learning task. The results indicated that a decrease in performance in some strains was a result of age-related vision loss or disorders which represents a link in age-related changes in the neurophysiology of the visual system and the deficits in visually guided behavior.

Greifzu, Kalogeraki, and Löwel (2015) investigated the effect of environmental enrichment in C57BL/6J mice in a visual water box task. Subjects were either raised in an enriched environment (EE) or in standard cages (SC). For measurement of visual acuity, the mice had to distinguish a low spatial frequency grating of 0.086 cycles/degree from an equiluminant gray screen. For measurement of orientation discrimination, the mice were trained to distinguish between horizontal and vertical square wave gratings of 0.086 cycles/degree. Results indicated that old SC- mice had a visual acuity of 0.51 ± 0.02 cycles/degree, whereas old EE-mice had a visual acuity of 0.48 ± 0.01 cycles/degree. It was observed that visual acuity, orientation discrimination, and learning the visual water box task were similar in both EE and SC mice. Apart from the visual water box mice were also tested on the virtual-reality optomotor setup. It was observed that there were similar spatial frequency and contrast thresholds of the optomotor reflex in both EE- and SC-mice. After completion of all behavioral vision tests, visual cortical responses were recorded and analyzed. It was observed that environmental enrichment extended as well as restored ocular dominance plasticity into old age. Overall, visual acuity and other visual parameters were not higher in EE compared with SC-mice, however, raising mice in an enriched environment in contrast to standard cages increased brain plasticity and extensively modified the molecular composition of the cortex.

The following parameters can be observed on the visual water box:

The visual water box is used to study learning and memory behaviors in rodents when presented with visual stimuli displayed on two computer-controlled monitors. The monitors allow easy manipulation of the visual stimuli without interrupting the task. The visual water box challenges the natural inclination of rodents to escape from water by providing a hidden escape platform. The non-invasive nature of the visual water box makes it a reliable task to measure the visual capabilities of rodents. Evaluation of visual capabilities can be done with great speed compared to other behavioral techniques such as the forced-choice Y maze and the jumping stand. The visual water box can be used to study plasticity of the brain and can also be used to test the effects of diseases and disorders, brain lesions, and pharmacological manipulations on learning and memory.