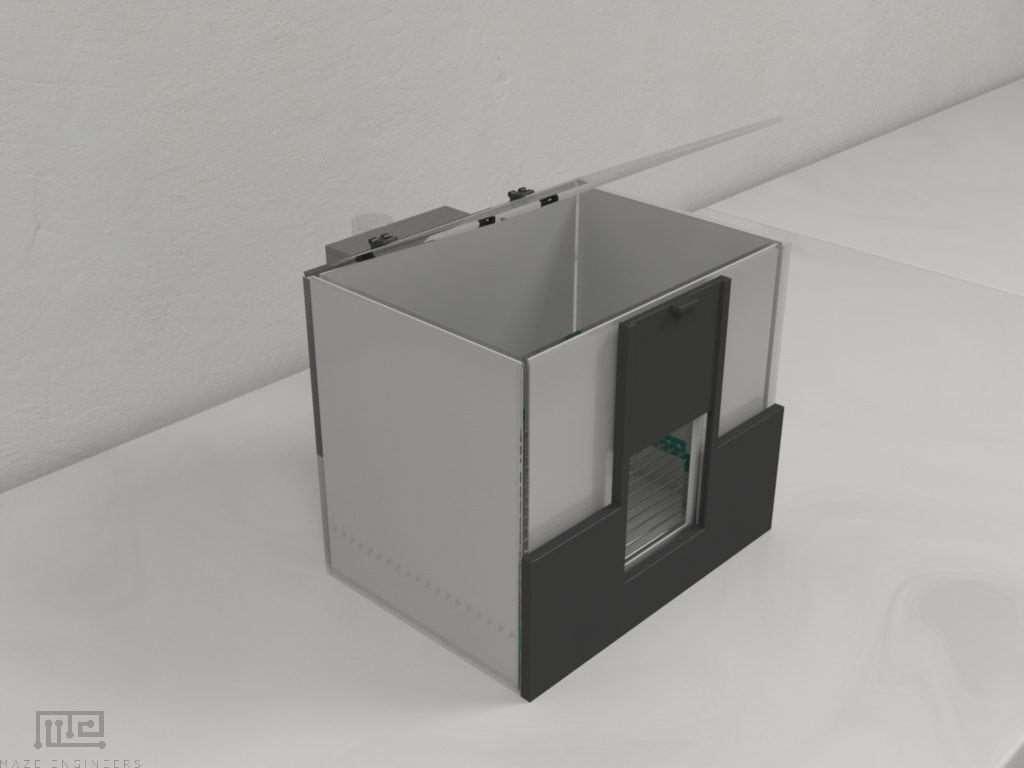 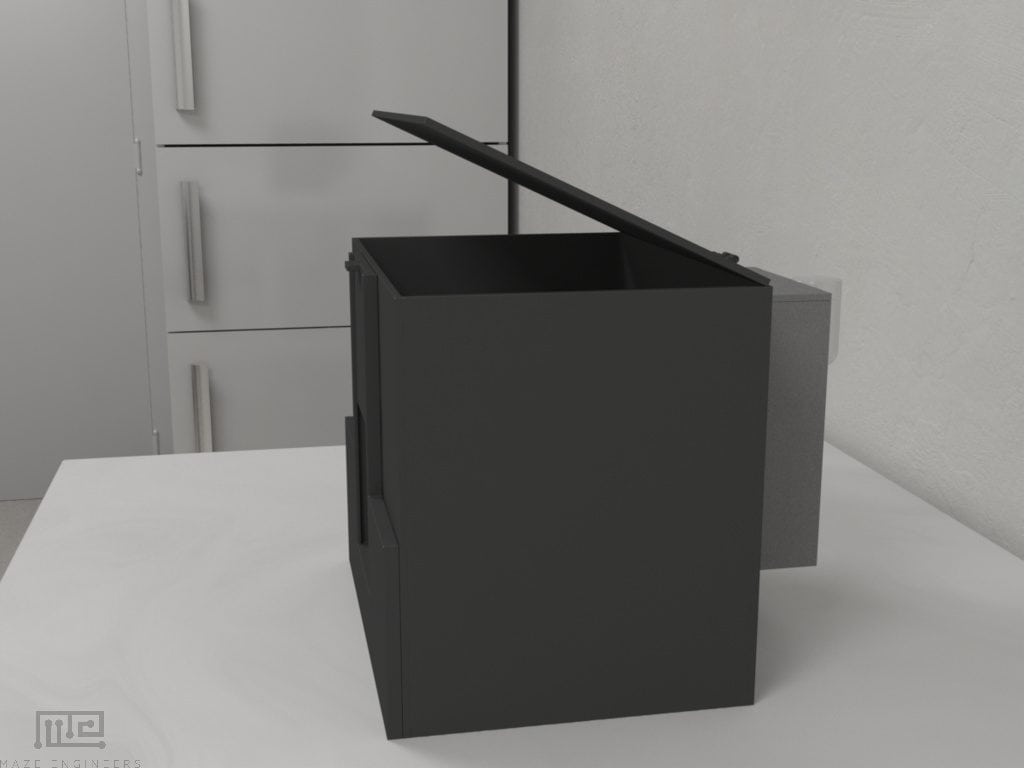 The Vogel test is a classic protocol where rodent subjects are water deprived and then placed in the an apparatus while simultaneously exposed to punishment in the shape of a mild shock whenever fluid is retrieved. It is used for measurement of the ability of drugs to alter the drinking behavior in these water deprived rodents. The MazeEngineers Vogel’s test apparatus includes the following key features to help your experiments succeed:

Vogel Conflict Test (VCT) is a widely used technique that is employed as the screening method for drugs having apparent anxiolytic properties.
Vogel Conflict Test introduced in 1971 by Vogel is the prevailing paradigm (Vogel et al., 1971). Numerous paradigms were introduced to create a conflict situation in subjects as it is critical to evaluate the working of anxiolytic agents.
Geller and Seifter introduced the pioneer paradigm in 1960. In their model, mice or rat had to press the lever for a food reward. Vogel’s model is the modification of the Geller-Seifter paradigm.
In this classical model, subjects were water deprived for 2 days and then placed in the VCT apparatus for 3 minutes testing period. It measures the ability of the drugs to alter the drinking behavior of water deprived rats exposed to punishment in the shape of a mild shock.
Benzodiazepine (diazepam) and barbiturate (pentobarbital) produced significant anticonflict effects, which means that these drugs increased the number of electric shocks subjects received during the test session. On the contrary, amphetamine does not produce anticonflict effects (Stephens & Andrews, 1991).
A specific drug-induced increase in the number of shocks taken (equivalent to water drunk) is considered to reflect anxiolytic properties.

The number of licks of the spout is counted. The current is switched on 2 seconds after the subject begins to drink, and every 20th lick is punished by an electric shock with the intensity of approx. 0.5mA through the grid, which constituted the base of the chamber. The test is continued for 3 minutes, and the drug under consideration is injected half an hour before testing.

Vogel’s version lacked information regarding the housing of the subjects. The study did not specify if animals were housed in groups or were housed individually. Modern studies utilize both types of housing which can have diverse results (Millan et al).

Before testing, animals were deprived of water for 2 days to induce thirst. The animals were housed in an artificially illuminated room on a 12-hour light dark schedule. The temperature was maintained at 25 ±1.0.

Habituation: On the first day of the drug effect experiment, individual animals that have been deprived of water for 48 hours were put into separate chambers and were accustomed to the test chambers for 40 minutes.

One week later, the same animals, which had again been deprived of water for 48 hours before the test, were introduced in the chamber 30 minutes after administration of the drugs or their vehicle (Umezu, 1999).

The subjects promptly find the bottle spout during the test if they are water restrained. Additionally, providing subjects limited access to water daily over the training period permits it to be protracted for a longer duration, thereby increasing stability and reproducibility of performance.

There are two documented modifications of the Vogel conflict test.

One modification was established at the Russian Academy of Medical Sciences. It was acclaimed as the reference for the study of the anxiolytic activity of pharmacological agents (Ed. R. U. Khabriev et al., 2005).

The experiments were conducted on outbred white male rats with the body weight ranging from 200 to 250 g and were housed in groups of 5 per cage. On the first day of the experiment, the subjects were completely dispossessed of water. After 24 hour dispossession, the rats learned how to get water from the bottle spout located in the experimental chamber (27.5×27.5×45 cm).( G. M. Molodavkin, T. A. Voronina, 1995)

On the third day, again after 2 days water dispossession, the rats were placed again in the experimental chamber. After 10 seconds of the first water intake, constant current (0.2mA) was delivered on the spout of a drinking bottle and the electrode base of the chamber. Each water intake was punished, and the testing duration was 10 minutes. However, the tested drug was administered 30 minutes before the test.

The experiments were conducted on male Rj: Wistar (Han) rats with the body weights ranging from 160 to 227 g. Five subjects were housed per cage.

After 48-hour water deprivation, rats were introduced in a transparent plexiglass chamber (15×32×34 cm) with the floor made up of stainless rods that were 0.4 cm in diameter and each rod was 1 cm apart.

The posterior wall of the chamber was made up of opaque plexiglass chamber with the intention to hide the observer. On the opposite wall of the opaque wall, a water bottle was placed in the center 5cm above the floor.

One pole of the shock generator was connected to the bottle, and the other was attached to the metal rod floor. Every time the rat licked the bottle spout, an electric shock (1.7mA) was generated after 2 seconds. The test duration was 3 minutes, and the tested drug was injected one hour before the test.

Vehicle treated control group is administered with a saline solution whereas the intervention group is injected with the drug under study. An example graph depicts the lick response rate of the subjects under three states i.e. no injection state, diazepam administrated state, and the saline administrated state.

The Vogel conflict test has well-documented importance regarding the characterization of diverse classes of anxiolytics. Additionally, it is believed to have considerable scope for its continuity and enhanced application in the identification of novel agents and the assessment of their mechanism of action.

VCT has the advantage of eliminating the problems that arise in the Geller-Seifter model. With VCT, the necessity for daily and long-term training of subjects is no longer a problem. Furthermore, the problem of repeated utilization of the subjects (exposure to drugs may alter the results when the same subjects are utilized again and again) is also solved.

Despite the exceeding efficiency regarding classical anxiolytics, the test is susceptible to numerous variables, such as pain, learning and memory, and thirst. These variables can impede the interpretation of the results.

As anxiety is idiopathic, therefore the animal models are hard to create and are usually inconsistent. Besides the classical anxiolytics, SSRIs which will theoretically increase the number of responses, display no effect in the Vogel conflict test (Millan, Mark J, et al., 2003)

The VCT can also exhibit false positives. For instance, if the intensity of the shock is too low, then subjects might disregard the shock and continue to drink water from the spout which can make the results unreliable. Drugs that enhance the thirst can also give faulty results (Witkin, Jeffrey, 2011)

The chief drawback of the Vogel conflict test is the lack of a systemic exploration of drug effects on non-conflict behavior (Green & Hodges, 1991)