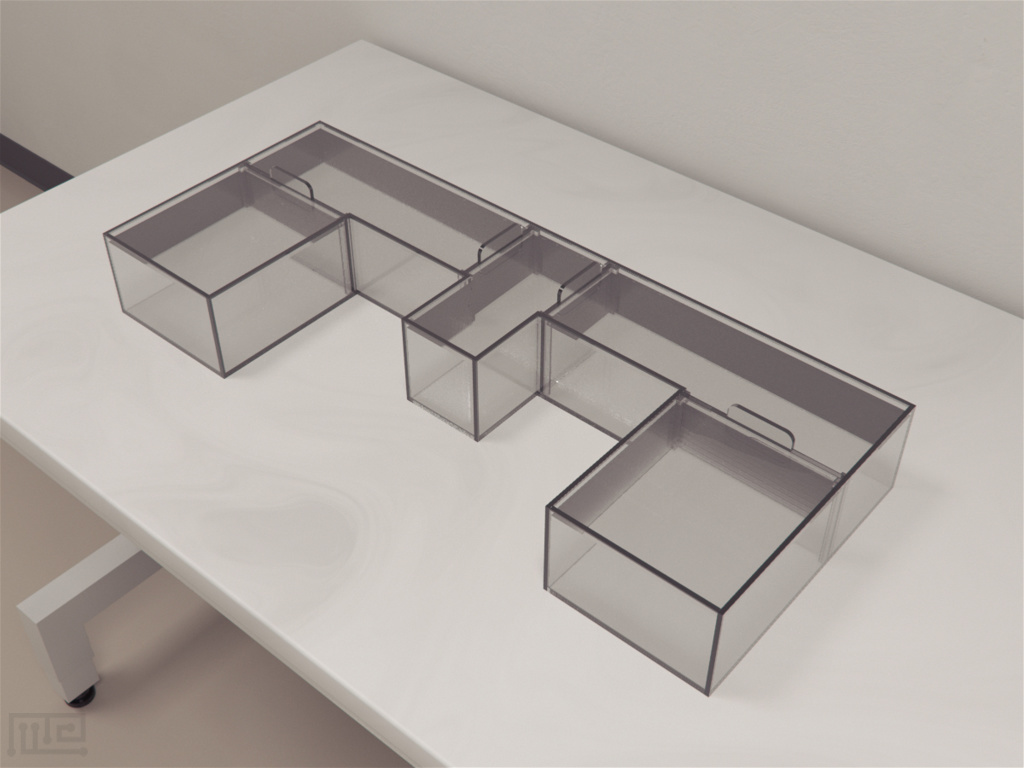 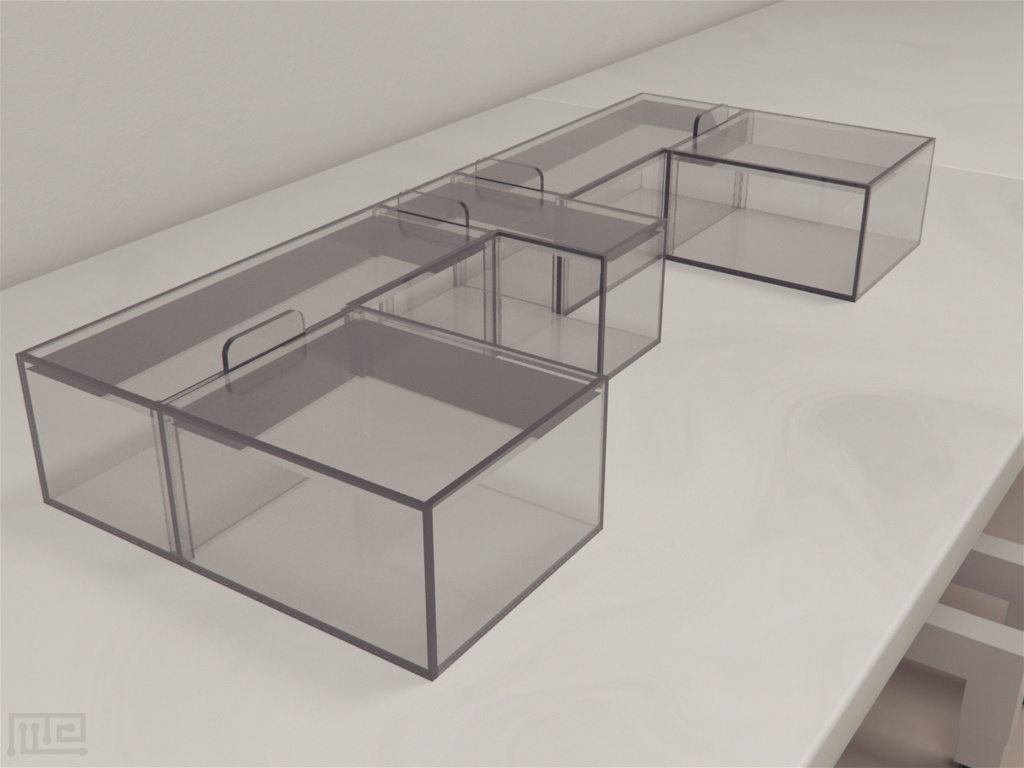 Water E maze is a novel paradigm used to evaluate empathy and social behavior in rodents. The brain regions associated with empathetic behavior include the prefrontal cortex and subcortical emotion generating systems. Empathetic behavior has underlying cognitive functioning that varies depending on social, environmental, and temporal conditions. The Water E maze task utilizes pain sensitivity in response to conspecific distress and social factors in rodents to evaluate empathetic motivation (Schwartz, Silberberg, Casey, Kearns, and Slotnick, 2017). The use of rodent models helps advance the understanding of empathy impairments observed in neuropsychiatric disorders and the ontogeny of social behavior. In addition to emotional contagion and prosociality, the task permits the detection and demonstration of affective states of social responses and fear-induced behavior.

The Water E maze is an “E” shaped apparatus constructed on a polyvinyl chloride platform with a Plexiglas ceiling. The maze provides the subject with two choice arms. The task involves the observation of choice preferences, maze exploration, and memory errors. Generally, the subject is evaluated for empathy based on its preference of conspecifics placed under wet and dry conditions in the goal arms. The task conditions can be modified to evaluate empathy and social behavior. The apparatus can also be adapted to assess learning and working memory by introducing a ladder or a raised platform in the wet chamber.

The Water E maze is an “E” shaped maze constructed on a polyvinyl chloride central grey platform measuring 50 cm. It consists of a start box, two alternating goal boxes, and two passageways leading to the goal boxes. The goal boxes are 21 cm by 18 cm by 11 cm. The wet goal box is filled with water to a depth of 20 cm at room temperature. Each maze arm is 84 cm long, 12 cm wide and 11 cm high. The aisles are equipped with polyvinyl doors, which can be lowered through slits to block the movement through the alley.  The maze arms are walled to secure the animal and to prevent any outside cues from exasperating the task performance.

Before beginning with the trials, clean the apparatus with a 70% ethanol solution. Ensure that the equipment is cleaned between trials to prevent any lingering stimuli from disturbing the task. Illuminate the apparatus by using an overhead illuminating source to prevent shadows.

The task observation can be assisted by a video tracking and recording system such as Noldus EthoVision XT.

Two weeks prior to the experiment, acclimatize the animal to the maze by placing it in the apparatus for 5 minutes daily. Gently handle the test subject during the acclimation to acquaint it with the experimenter.

For empathy and social behavior assessment, place the stimulus animal in one of the goal boxes. Begin with forced trials wherein the subject is forced to choose the wet and dry boxes equally. Follow these trials with free-choice trials. Allow the animal to choose between the alternating wet and dry goal boxes without any restrictions. Observe the subject’s behavior for 3 minutes in every trial. Consider the animal entered into an arm if it crosses 3 cm into the box. In case the subject fails to enter a goal box within the allocated time, remove it from the maze and test it again in the maze after 1 minute. Gently remove the animal from the maze and return it to its home cage. Repeat the trials on consecutive days as per required.

Evaluation of learning and memory

For learning and memory assessment, fill the maze with water such that the animal is not able to touch the floor of the apparatus. Place a ladder (escape ramp) in one of the choice arms of the maze such that it is not visible to the animal. Gently place the animal in the start box. Allow the subjects enough time to locate the ladder. Perform four trials per day with at least 30 minutes to 1 hour resting period between the trials. Repeat trials as required. Learning and memory protocols can be modified and adapted as per the needs of the investigation.

Assessment of social contact and empathetic motivation to conspecific distress

Schwartz et al. (2017) assessed the response to conspecific distress using Sprague-Dawley rats. Water E maze was used to evaluate empathetic and social behavior in the subjects. The animals were evaluated under different test conditions involving a pool of water and/or a stimulus animal. Regardless of the experimental conditions, it was observed that the test subject preferred the goal box with a pool of water. This was true even when a stimulus conspecific was not present. When given a choice between a trapped conspecific in the dry goal box and a soaked conspecific in the wet goal box, the subject preferred the soaked animal. However, when given a choice between a dry animal and am empty dry goal box, no significant difference could be observed. The results suggested that the social contact hypothesis is the primary driver behind the response to conspecific distress in comparison to empathetic motivation.

Evaluating the behavioral teratogenic effects of prenatal Rubratoxin B exposure

Kihara et al. (2001) investigated the effects of Rubratoxin B (RB) exposure on behavioral ontogeny using pregnant Jcl/ICR mice. The subjects were intraperitoneally injected with vehicle only (control group), 0.1 (low dose) or 0.2 (high dose) mg/kg/day of Rubratoxin B. The Water E maze was modified by placing an escape ramp at the ends of the arms that was not visible from the starting point. The offspring of the subjects were evaluated for their neuro-motor coordination, swimming time, and the number of errors made while locating the escape ramp. No remarkable contrasts were noted in RB exposed groups and the control group.

Grawe, Gardlund, Jalkesten, and Oskarsson (2004) assessed the implication of maternal cadmium exposure on offspring’s motor activity. In the study, lactating Sprague-Dawley rats were exposed to 0, 5 or 25 ppm cadmium through drinking water. The mean cadmium levels ranging from 0.006 to 0.030 mg/kg wet weight and 4 to 13 mg/kg wet weight were obtained in exposed pups and dams, respectively. The subjects were evaluated for learning and memory using the Water E maze. Though a significant improvement by trial could be observed, no Cd-related effects on memory and learning were found. The results suggested that the extensive cadmium exposure may render neurobehavioral alterations in pups.

Ko-Un et al. (2014) employed Fictive Reward Maze to study choice behavior across test sessions. The subjects were seven rats 9-11 weeks old, housed initially in home cages, then trained in the maze. The tasks were based on auditory cues and carried out in the dark in a way that only the peculiar number of sounds guided navigation from the start box to goal.

The analysis of test sessions revealed that animal’s choice was influenced by the magnitude of reward. The rats were quick to learn and able to modify future choices based on the comparison of actual and fictive reward. However, the effect of the fictive reward was temporary and evaporated quickly. The effect of the actual award was long lasting and evoked value learning system in the brain.

The findings of the present study are consistent with earlier studies in humans and primates. It is a well-established fact that human behavior is largely determined by the actual or fictive outcome. Studies have shown that nonhuman primates with advanced intellectual aptitude, such as monkeys and chimpanzees, are chiefly drawn towards targets that promise large fictive awards. (Hiroshi & Daeyeol, 2011)

Hayden et al. (2009) found that the ability to make a rational decision is not unique to humans and primates only. Other species, incapable of highly-advanced cognitive capacity, such as rodents, also exhibit observational and analytical decisions and make behavioral modifications accordingly.

The data obtained from the Water E Maze is simple and straightforward. The parameters that can be recorded are as follows.

Water E Maze is a valuable neurobehavioral modality to evaluate conspecific empathetic motivation in rodents. The test can be used to assess empathy as well as sociability. The apparatus allows task performances under a number of conditions wherein the subject can choose between a dry and a wet animal, dry ground and a pool, a water pool and dry ground with a transparent door blocking access, and a dry animal and an empty goal box. The task minimizes the external, proximal, and distal cues from disturbing the observations. The test can also be used to evaluate neuropsychiatric disorders with social and empathetic impairments.

The Water E Maze alone cannot cover the prosociality and empathetic motivation in its entirety. Thus, using it in combination with other neurobehavioral assays such as empathy assay and fear conditioning is recommended. The task performance can vary depending on the age, strain, sex, and species of the test subject. Further, the personality and emotional state of the animal can also affect the task. Empathy is a complex cognitive process exclusively expressed by humans; therefore, care must be taken while translating the research outcomes to human applications.