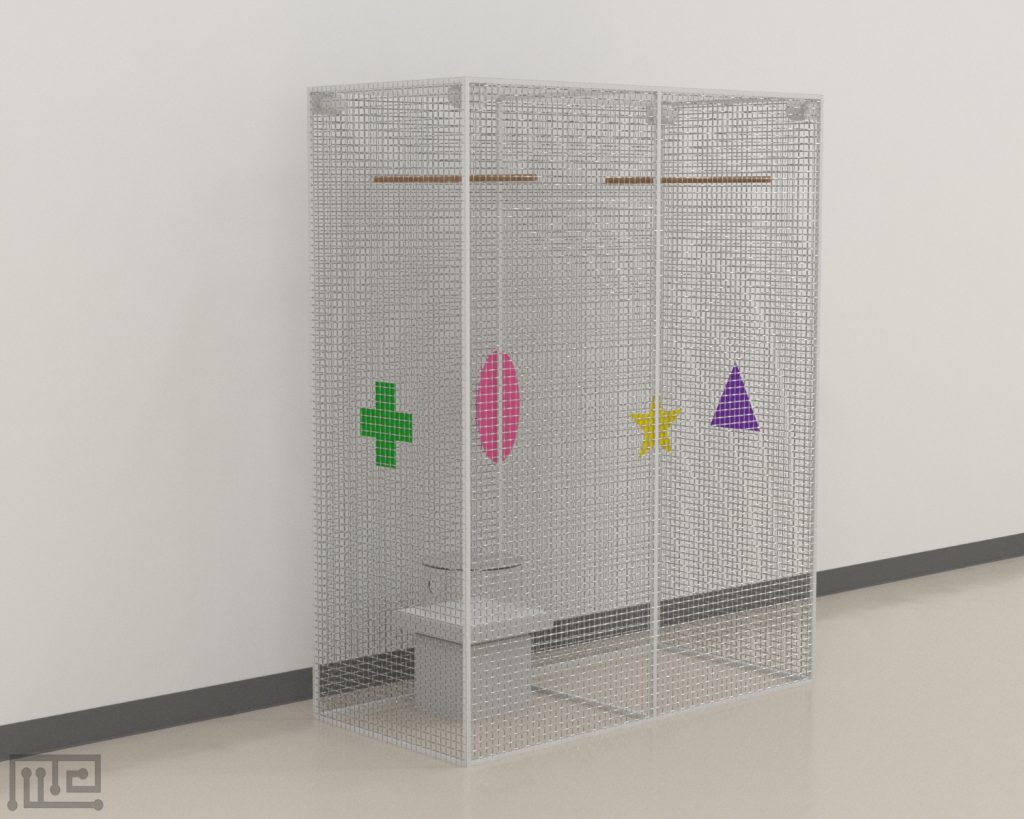 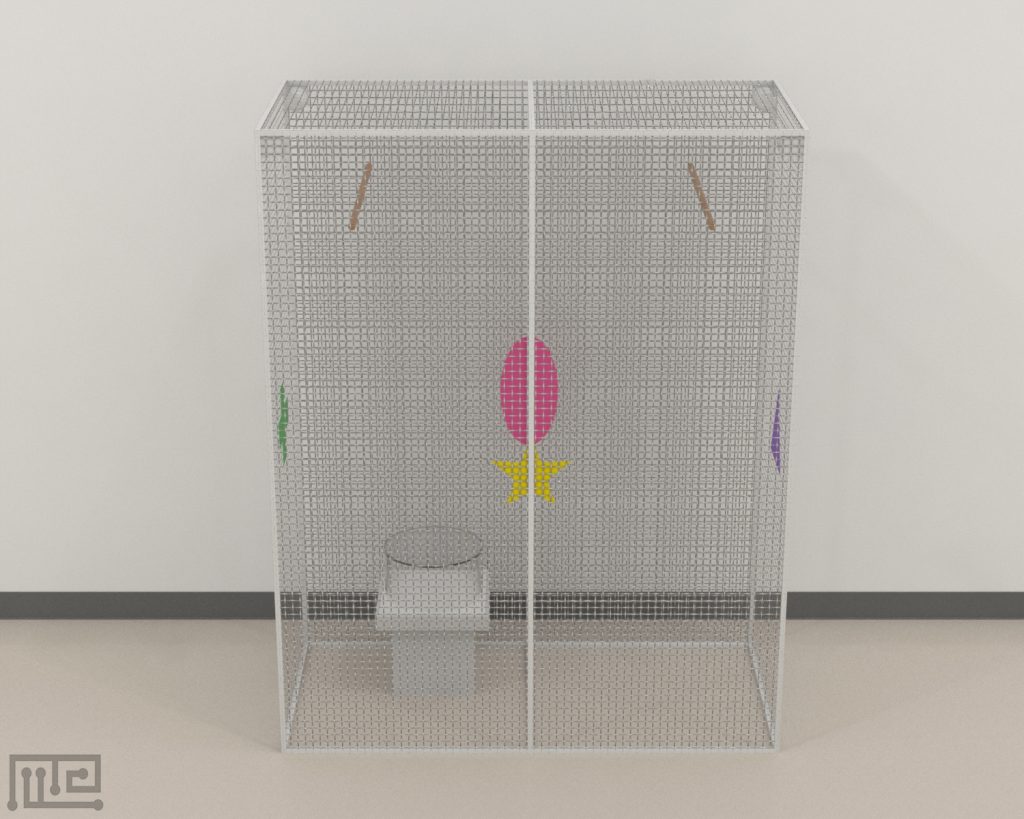 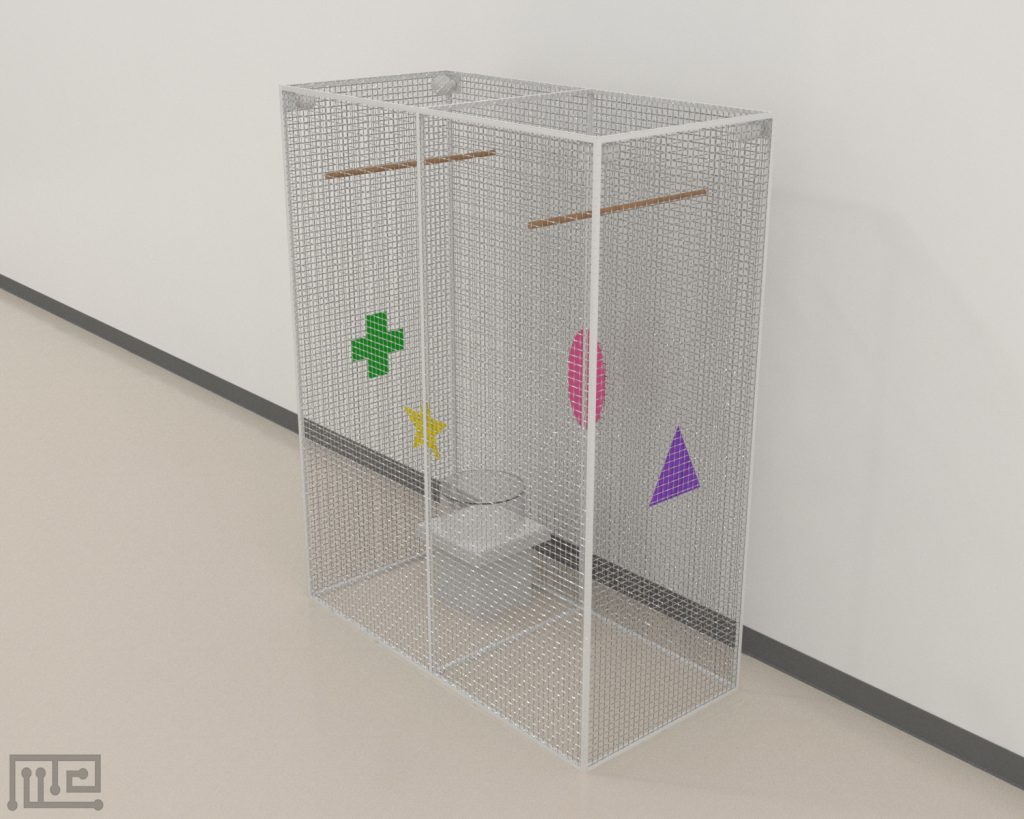 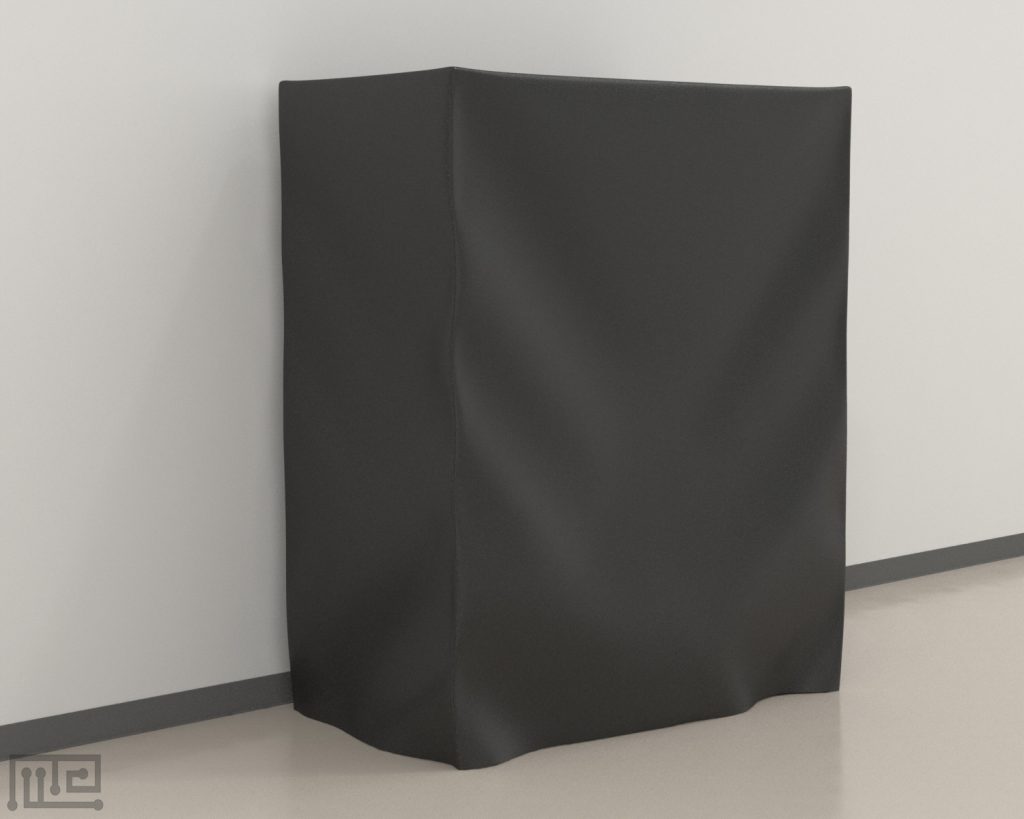 The Zebrafinch Day Escape Maze was used by Taylor Alexandra Williams (2014), to assess the effects of adrenergic antagonists on spatial memory in the zebra finch.

The escape maze is a clear cylinder made from extruded Plexiglas with a escape hole cut above the hotplate and a clear Plexiglas lid. The floor of the maze is a ceramic tile heated by an electronic hot plate. The escape hole was positioned in the Northwest quadrant of the cylinder according to the cardinal designations of the aviary walls.

The aviary was lined with black cloth, so that no external light or objects could be seen from the inside. Four light bulbs were positioned in the upper corners of the aviary. Four distal cues were positioned on the aviary walls that we designated as north, south, east and west. The cues included a yellow star, a purple triangle, a pink oval, and a green cross on the south, east, north, and west walls of the aviary respectively. These cues were equidistant from the floor and ceiling of the aviary, and centered on the side in which they were placed.

The Zebra finch Day Escape Maze is used to study spatial learning and memory in zebra finches. It consists of a clear cylinder that contains an escape hole and is placed on a stool inside an aviary. The aviary is lined with black cloth to inhibit external cues’ interference, and light is provided through four light bulbs positioned on the upper corners of the aviary.

Memory formation is a complex process in which different neuro-processes occur to promote memory retention and recollection (Matthew, 2015). Even though zebra finches are usually used in studies that investigate memory formation in song learning strategies, they have also been used in various behavioral studies that focus on understanding the different memory systems involved in spatial learning and navigation strategies (Sanford & Clayton, 2007; Bischof & Watnabe, 2006). The Zebra finch Day Escape Maze provides the opportunity to investigate spatial learning and memory strategies in zebra finches. The maze is placed on a hotplate, and the task focuses on the subject’s ability to escape the maze through the escape hole. Since the task relies on distal cues placed on the aviary’s walls rather than internal cues of the hotplate to escape the maze, probe trials are introduced. During probe trials, the cylinder is replaced with an identical cylinder with no hole, and the hotplate is rotated to observe if the subject spends more time in the same quadrant of the maze before the rotation of the hotplate. In addition, the entire aviary can also be rotated during probe trials.

The Zebra finch Day Escape Maze consists of a clear cylinder that measures 30.2 cm in diameter and 15.2 cm in height and is made of extruded Plexiglass and includes a Plexiglass lid. The floor of the maze is made of ceramic tile and is heated by an electronic hot plate. The maze also contains a 5.4 cm escape hole that is cut 7cm from the hotplate and is placed on the northwest quadrant of the cylinder according to the cardinal designations of the aviary walls. The maze is placed on a metal stool that is placed in an aviary that measures 148.6 cm in length, 71.1 cm in width, and 188.2 cm in height. Two perches are present that extend the aviary’s width and are positioned 25 cm below the ceiling and on opposite ends equidistant from the walls. During experiments, the aviary is lined with a black cloth to inhibit light and external stimuli from being seen from the inside. Light is provided inside the aviary through four bulbs positioned on the upper corners. Four distal cues include a yellow star, a purple triangle, a pink oval, and a green cross positioned on the four aviary walls. The cues are placed in the center of their designated walls and equidistant from the aviary floor and ceiling.

Clean the maze after each trial to remove odor residues. Appropriately light the apparatus. Maintain the hotplate at ~50°C to prevent severe stress and injury to the subjects. A tracking and recording system such as the Noldus Ethovision XT can be used to assist with observations.

In the first experiment, the effect of the β‐AR antagonist propranolol on hippocampal spatial memory was investigated on twenty-four subjects. The Zebra finch Day Escape Maze Task was first performed on four consecutive days for the four cardinal designations of the maze. The subject was allowed to escape the maze within two minutes, and its movements were observed through a camera. Probe trials were performed on the fifth day in which the maze was replaced by an identical cylinder that contained no escape hole. The escape location was on the Southeast quadrant, and the hotplate and stool were rotated 180° to ensure that the subjects were not using proximal cues on the hotplate, but were using distal cues on the walls of the aviary to escape the cylinder. Results indicated that the subjects spent most of their time in the Northwest quadrant, which indicated the use of distal cues for task performance. On the 5th day, the subjects were divided into three groups and were injected with either saline 0.9%, 20 mg/kg propranolol, or 40 mg/kg and were tested on the apparatus 24 hours post-injection, 72 hours post-injection, and 1-week post-injection to observe if they still remembered the task. Results indicated that memory was maintained at the 20 mg/kg and 40 mg/kg doses. Therefore, the subjects were then administered 80 mg/kg of propranolol which showed postural and sympathetic side effects but still did not alter spatial memory.

In experiment 2, 18 subjects were used. The subjects were injected with either 0.9% saline or 60 mg/kg of propranolol to test its effect on spatial memory. Moreover, the subjects were injected 0 minutes post-reactivation or 25 minutes post-reactivation of the task. Three probe trials were performed that differed from the probe trial of experiment 1. During probe trial 1, the subjects were placed at the south point and remained there for 2 minutes. Probe trial 2 was the same as probe trial 1, and probe trial 3 consisted of replacing the cylinder with no escape hole and rotating the entire aviary 180°. Following injections, two additional probe trials were performed. It was observed that the subjects’ preferences varied in using the distal cues, room geometry, and local cues of the hotplate to perform the task. Results from the saline group indicated no effect of injection time. Furthermore, propranolol administered after reactivation had no effect on memory on the task in recall trials.

In experiment 3, an α‐AR Antagonist, Phentolamine, was utilized to test its effect on memory reconsolidation since the β-AR Antagonists from experiments 1 and 2 showed no effects. Phentolamine was injected 0 minutes post-reactivation and 25 minutes post-reactivation after spatial training. Eight subjects were used in the experiment and divided into two groups based on the injection timing. Probe trials were similar to experiment 2 but had a few exceptions. Results in the saline group indicated no effect of injection time. Injection time also did not affect the spatial task’s performance, and all the subjects showed strong spatial memory before drug administration. After drug treatment, results indicated that it did not have an effect on memory for the task. Overall results indicated that AR antagonists do not influence spatial memory reconsolidation in zebra finches.

The following parameters can be observed using the Zebrafinch Day Escape Maze:

The Zebra finch Day Escape Maze can be used to study spatial learning and memory behaviors in zebra finches. It can also be used to observe the effects of different drugs, diseases and disorders, and brain lesions on learning and memory. The Zebra finch Day Escape Maze can be modified according to different experimental needs. The maze can be replaced with an identical maze with no escape hole to observe the subject’s behavioral responses. The maze’s hotplate can also be rotated to observe if the subjects are using the distal cues rather than the proximal cues to escape the maze. In addition, the aviary can also be rotated. The hotplate is maintained at 50°C to prevent severe stress and injury to the subjects. Moreover, perches are present inside the aviary to serve as resting spots to provide positive reinforcement after escaping the maze. The aviary is lined with black cloth to prevent the subjects from using external cues and prevent outside light from entering the aviary.