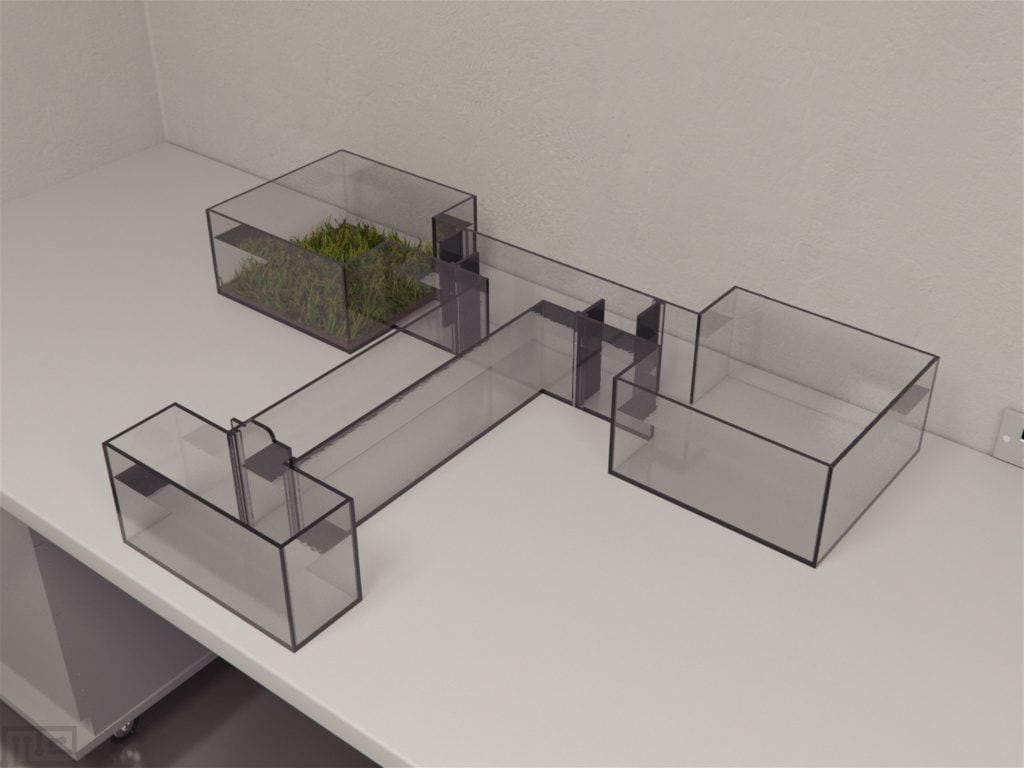 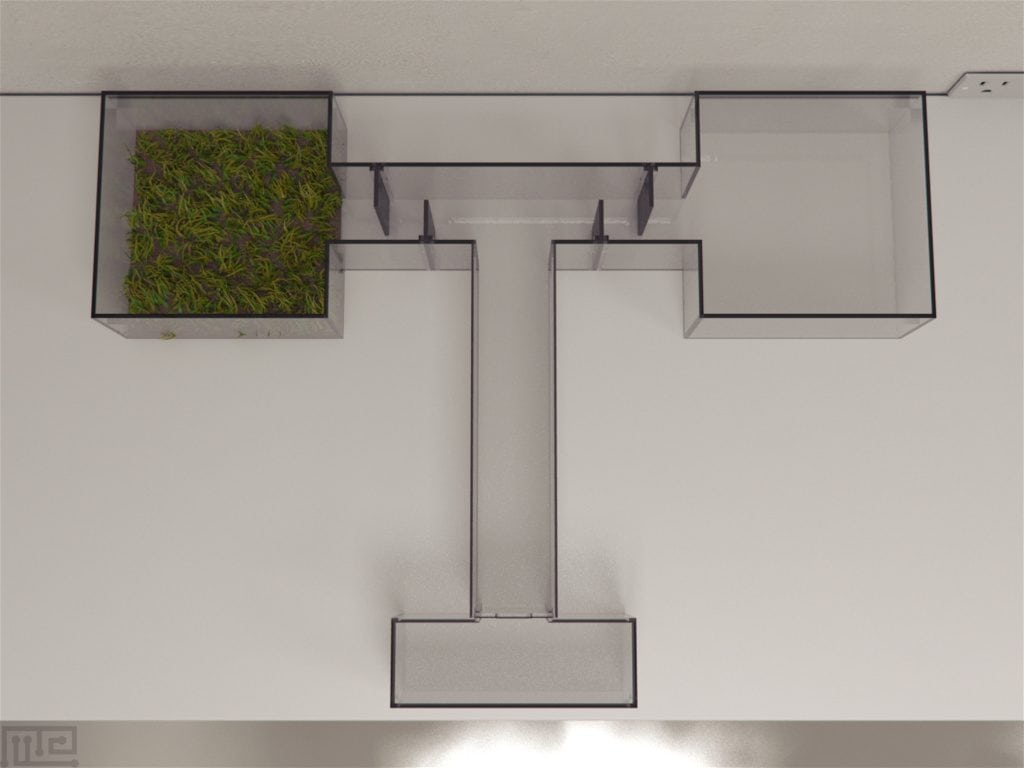 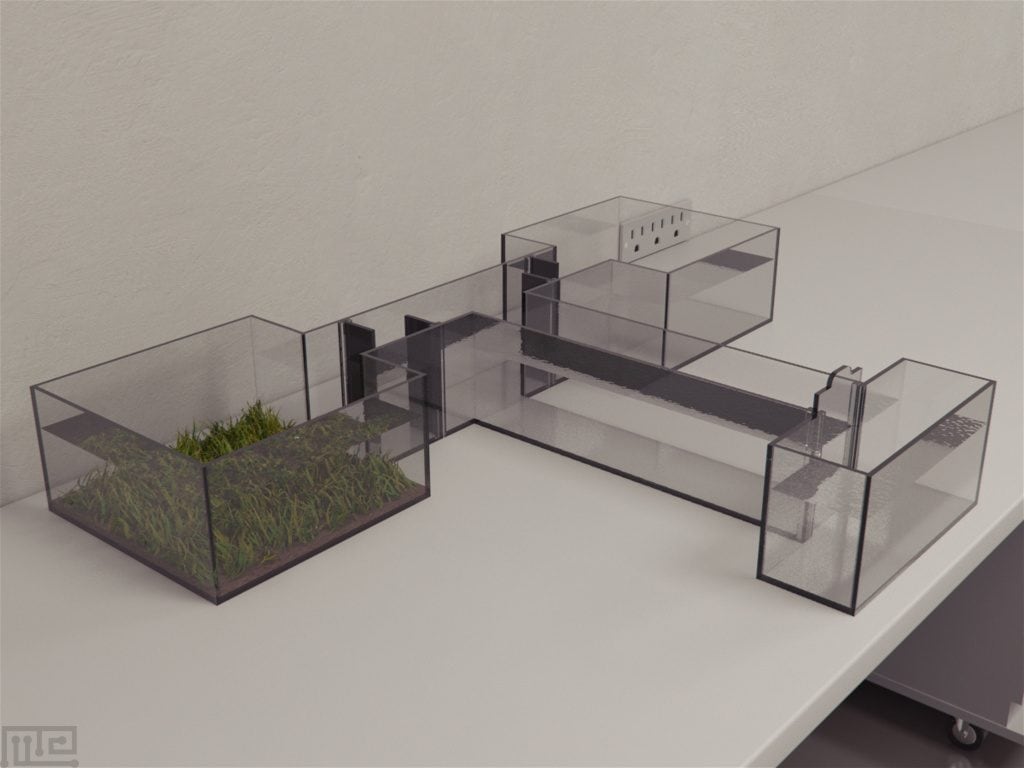 The Zebrafish bifurcating T maze has been described in the literature as a screening test for the role of nicotinic acetylcholine receptors in Zebrafish. It has been traditionally used as a screening maze, but can also be used for choice and learning experiments.

The Zebrafish Bifurcating T-Maze is often used as a behavioral screening test. The maze is an adaptation of the conventional T-Maze used in the assessment of spatial learning and memory. Just like the conventional T-Maze, the Zebrafish Bifurcating T-Maze also provides the subject with two choices. The aquatic maze usually uses deep water chambers at the ends of the choice arm of which one is designed to provide a more favorable environment. Opaque partitions are usually used to block the views of these chambers to prevent influence on the maze performance. The T-Maze is useful in the evaluation of the effects of drugs, aging, and anxiety on cognition and other behavioral performances.

Among non-vertebrate models, the Zebrafish are evolutionarily closer to humans. Their genetic similarity to humans and the availability of forward genetic phenotype screening make them ideal for research. Further, their maintenance and housing are much easier than other animal models. In the Zebrafish Bifurcating T-Maze, the drug or non-drug treated fish is tested for their ability to learn and remember the arm that leads to the favorable environment. The simple test allows rapid assessment of the cognitive and memory phenotypes.

The Zebrafish Bifurcating T-maze is an acrylic aquatic tank shaped like a capital ‘T.’ The long start arm (50 x 10 cm) bifurcates into two shorter choice arms (20 x 10 cm). The start arm has a 30 x 10 cm start zone that is separated from the rest of the maze by a removable transparent door. The ends of each choice arm are equipped with removable, deep water chambers of dimension 30 x 30 cm. Either of the chambers can be turned into a reservoir by addition of artificial grass, colored marbles, etc. Additionally, a 4.5 x 30 cm removable, opaque partitions can be placed beginning of the short arms to prevent viewing of the two chambers.

The subjects should be housed in tanks that are maintained at a constant temperature and pH value. It is advisable that these conditions be maintained throughout the sessions to avoid unnecessary harm or stress to the fish. It is also important to keep the water aerated and the quality of water maintained at an acceptable level. Automated tracking and video software, such as the Noldus Ethovision XT, placed on the ceiling above the tank allows tracking and recording of the behaviors and movements of the fish. Between each subject empty the tank and thoroughly rinse it before next use.

Prior to T-Maze trials, habituate the fishes to the environment to minimize novelty and handling stress. Allow the subjects to explore the maze for 1 hour every day on a 2-trials per day basis. Perform habituation trials for at least 3 days starting with a large group and gradually reducing the group size as the days progress. Gradual reduction of group sizes during habituation training reduces acute social stress when the subject performs the T-Maze task individually.

Begin the training session by isolating the fish in the start zone tank for 5 minutes. Open the door of the start tank after the 5 minutes have elapsed, and close it once the subject has entered the start arm. Allow the subject at least 5 to 10 minutes to reach either of the choice chambers. Once the subject has reached a chamber, let it stay in it for at least 20 seconds before placing it back in its home tank. Perform a second trial after 3 hours. Perform a final trial after 24 hours have passed.

Investigation of the role of nAChRs in learning and memory

The data collected from the Zebrafish Bifurcating T-Maze can include

The Zebrafish Bifurcating T-Maze is an adaption of the successful conventional T-Maze used in the assessment of learning and memory. The apparatus is simple, inexpensive and easy to construct. The clear apparatus allows visualization of the subjects as they perform in the maze. The removable chambers at the ends of the choice arms allow easy adaptation of the maze for other investigations. Further, these end chambers allow researchers to create different environments that either favorable or unfavorable to the fish to test different paradigms. The opaque staggered barriers enable blocking the view of the environment to prevent the environments from influencing the choice of the fish. The start box allows the introduction of start delays. The T-Maze task is ideal for as a behavioral screening test to evaluate the pharmacological responses of the fishes. The task can also be used in the assessment of hippocampal functions, age-related cognitive decline, anxiety, and conditional-learning.

The T-Maze is a single-point two-choice maze thus it has a higher rate of success possibility as the probability of the subject choosing the correct arm is by default 50%. The performance of the fishes may be affected by disturbing external stimuli such as noise, vibration, and visual stimuli. Handling, habituation and rearing environments can also have an impact on the performance. Undue stress and anxiety can result in incorrect results and observations. It is vital to maintain constant tank temperature and other environmental factors during the test to avoid unnecessary influences on the performances. Care should also be taken to consider the health of the fishes.