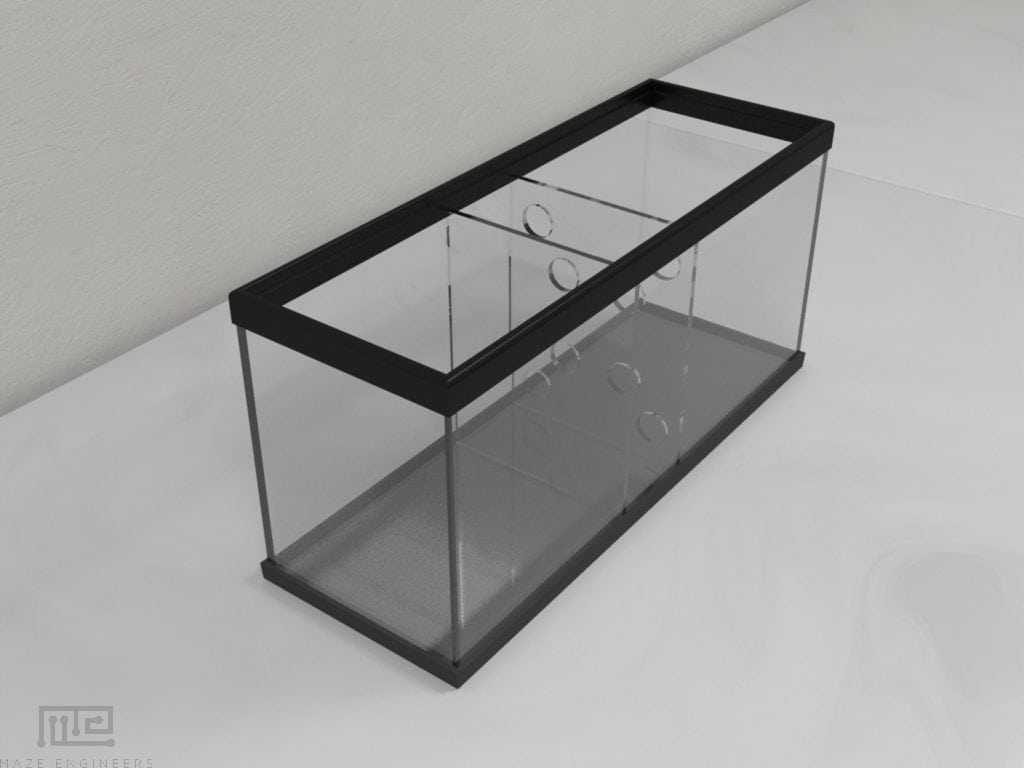 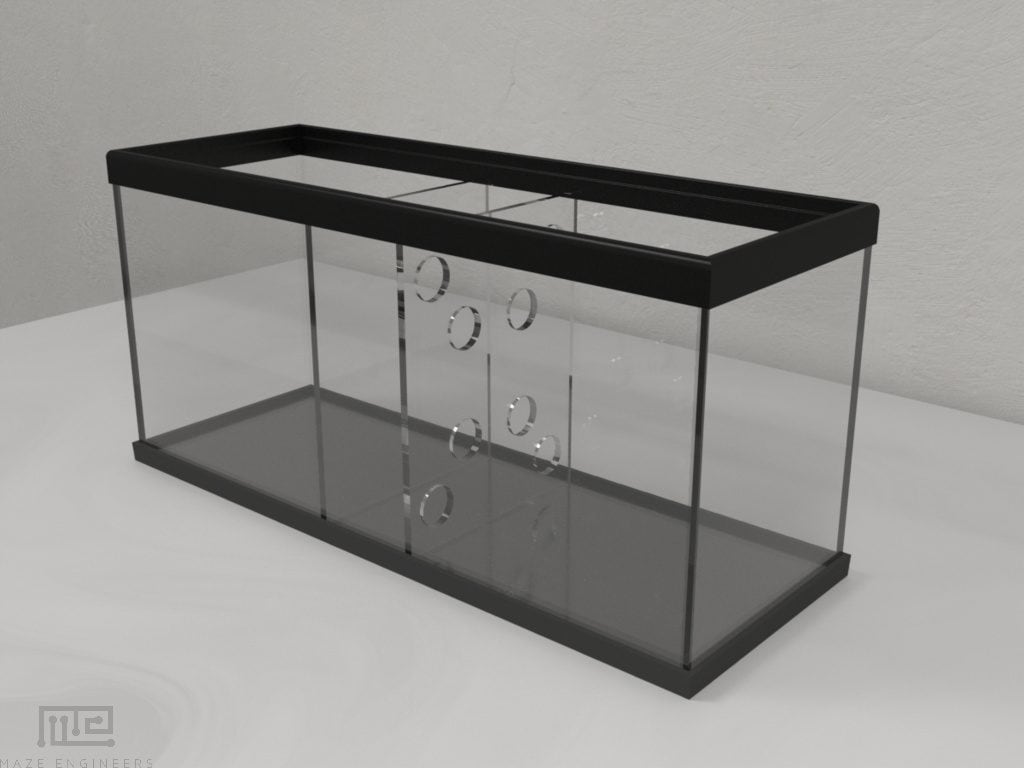 The MazeEngineers Place preference chamber is created to allow for maximum flexibility for your experiments. The chamber comes with 2 divider slots that allow the zebrafish to choose a chamber or retain the zebrafish in the center area. Floor is clear to allow for location preference. Customized floor patterns can be included in your order upon request. Sizing modifications can be requested within 50% of the original sizing. Please inquire for more details

Zebrafish conditioned place preference (CPP) is a widely used paradigm to evaluate the rewarding effects of food substances or psychoactive drugs. In the CPP task, the positive-reinforcing effects of drugs are assessed by the preference of the zebrafish to linger in the environment that was previously conditioned with a substance (drug).

The CPP paradigm exploits the natural tendency of the zebrafish to choose black over white. In this assay, the primary stimulus (drug) serves as an unconditioned stimulus. When it is paired with a secondary stimulus (visual cue) which acts as a conditioned stimulus, an approaching behavior for the paired environment is evoked. (Darland & Dowling, 2001)

The experimental treatment is inferred as rewarding if a significant change towards experimental (drug conditioned) compartment is observed. (Mathur et.al. 2011)

Darland and Dowling were the pioneers of establishing the CPP behavior in adult zebrafish (Darland & Dowling, 2001). They designed the apparatus to evaluate the addictive nature of cocaine.  In their model, they first recorded the baseline place preference and then confined the subjects to the least preferred compartment with exposure to cocaine for the evaluation of final place preference.

The apparatus consists of a Plexiglas CPP tank approx. 52 cm (l) x 17 cm (w) x 22 cm (h) in dimensions. The tank is partitioned by two opaque dividers (one intact and the other perforated) creating a central alley for the entry of the subjects. The tank is placed inside a brown box so that the subjects cannot see the experimenter. Wide array of floor patterns can be used as visual cues, and the most realistic approach is to place sheets of flooring pattern beneath the apparatus.

The fish’s activity inside the CPP tank can be recorded with the help of Noldus Ethovision XT placed on the overhead rack at the top of the tank. Floor patterns should provide enough contrast so that the tracking of the Noldus Ethovision XT is consistent and not blocked.

The purpose of the CPP paradigm is to evaluate reinforcing effects of drugs in zebrafish in a vehicle-treated control vs. disease model/intervention group, by assessing their baseline and final place preference behavior.

The water temperature is maintained at approximately 28 °C, and the subjects are kept in 10-14 hour light/dark cycle. The subjects are group housed in tanks with recirculating distilled water and are transferred to individual tanks few days before the test. The testing room should be soundproof.

The room should be properly illuminated so that the subjects could distinguish the pattern and the tracking is consistent. White noise should be provided by a fan that is continued for the entire course of the test. Experimental tables should be covered with foam boards that serve as shock absorbers; diminishing the impact of vibrations.

Evaluation of Phase I & Phase II

The testing procedure lasts for two days. During Day 1, the baseline preference (Phase I) and the first conditioning (Phase II) are assessed.

At the start of testing, the subjects should be gently introduced to the central alley with the aid of the fishnet and allowed to explore. After 2 minutes, the dividers are carefully removed, and the subjects are permitted to explore all the compartments of the tank for 5 minutes. The base line place preference for the white and dotted pattern is recorded.

On Day 2, approx.16 hours (minimal intervening period for drug clearance) after Phase II, the subject’s final preference place for the white or dotted environment should be assessed.

The original version of the CPP tank for zebrafish was developed by Darland and Dowling. Their apparatus consisted of a tank divided into two distinct compartments having visual cues (white versus dotted pattern). Numerous modifications have been made to the CPP paradigm with slight changes in the floor and tank patterns.

Ninkovic et.al. studied the reinforcing effects of  amphetamine with the aid of a CPP tank. Their apparatus consisted of two chambers having two distinct compartments colored brown and white. The floor of the tank had two black circles.

Kily et.al investigated the effects of nicotine and ethanol with CPP task. They modified the apparatus by dividing the tank into two chambers, one side having black spots and the other side having alternate black and white stripes.

Mathur et.al utilized the CPP model to study the effects of morphine and ethanol. In their model, the tank was divided into white and dotted halves by approx. 8 cm wide central alley. The dotted compartment consisted of 16 blue dots approx. 2 cm in diameter in a uniform pattern.

The sample data represents the co-relation between ethanol concentration and change in preference (%) in zebrafish. It is evident from the graph that with the increasing ethanol conc. in the CPP tank, the subjects spend more time in the drug conditioned compartment.

The CPP task is an ideal model for drug screening; identifying substances with reinforcing or aversive characteristics. It also helps to isolate mutants with altered drug response.

A large number of drug compounds can be effectively evaluated in a reasonable time span making CPP the most likely choice for initial screening of rewarding drugs.

Besides the advantages, finding the exact concentration of the drug can be time-consuming because of the ultra-narrow therapeutic window of drugs in zebrafish. (Bevins, R, 2005)

The design of CPP tank is critical, and the experimenter should ensure that the subjects are not biased toward any compartment.

Ninkovic, J. et al. Genetic identification of AChE as a positive modulator of addiction to the psychostimulant D-amphetamine in zebrafish. J. Neurobiol. 66, 463–475 (2006)