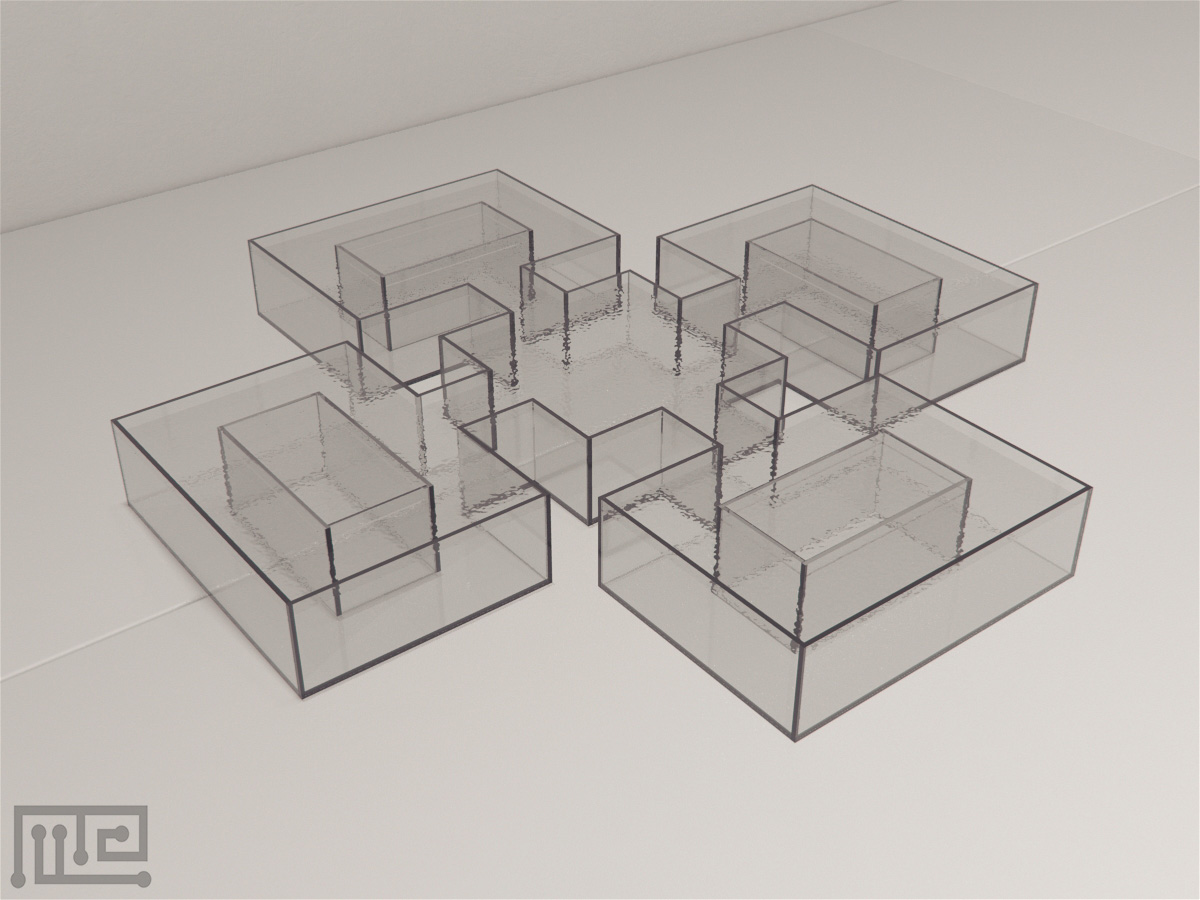 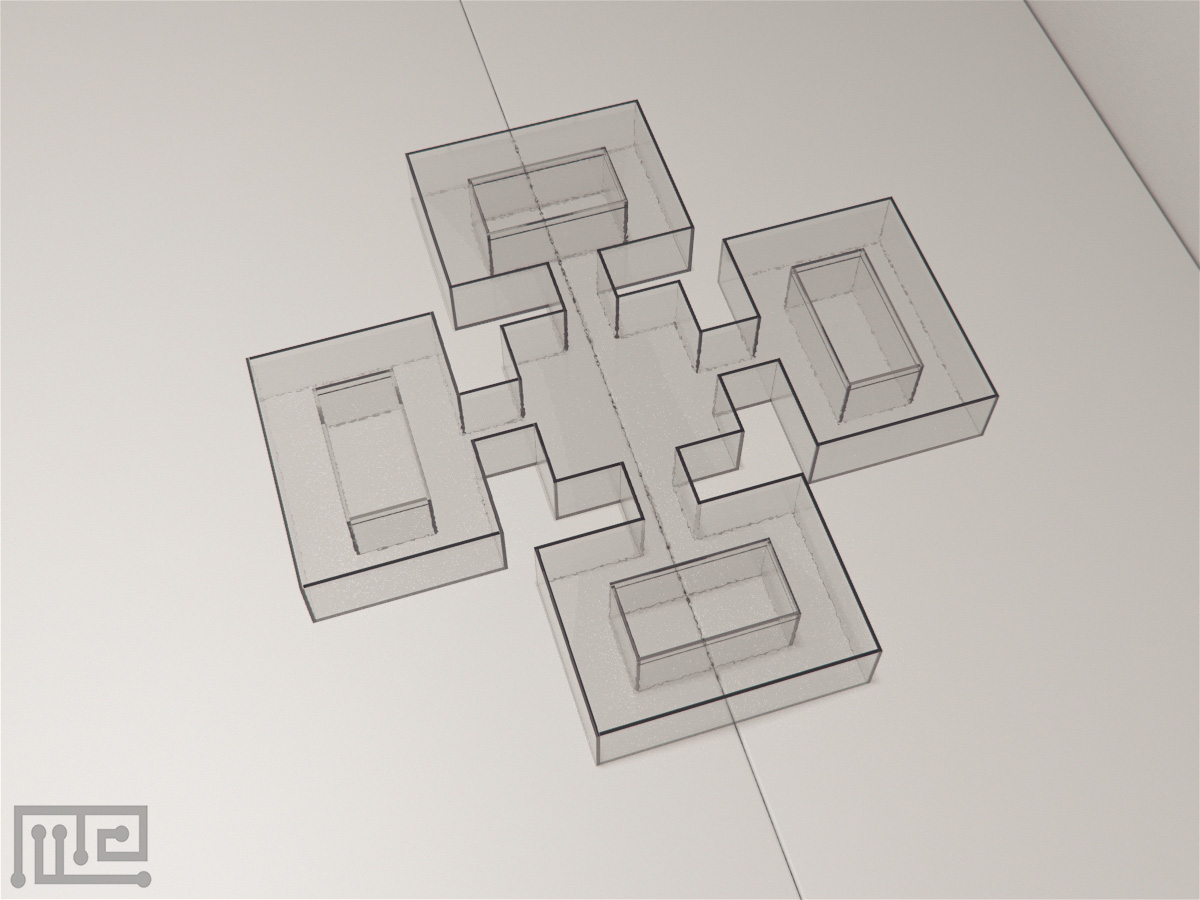 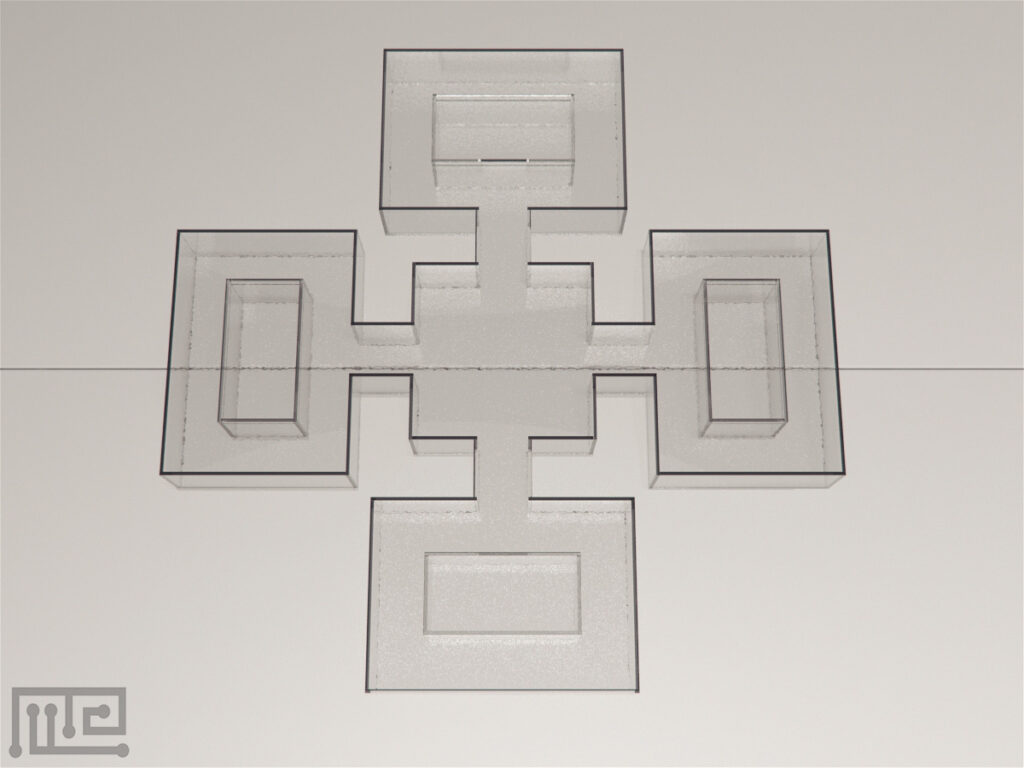 The zebrafish plus maze is a “+” shaped maze that contains four end compartments and one central compartment. It is used to analyze associative learning behavior in zebrafish.

The maze resembles the non-spatial version of the Radial arm maze which is used for rodents.

The subjects are tested for their ability to associate the visual cue with the rewarding unconditioned stimuli while swimming in the maze.

Mazeengineers offers the Zebrafish Plus Maze for both mice and rats. Custom coloring and customization are available upon request.

Request a Zebrafish Plus Maze
Menu

+S&H
Request a Zebrafish Plus Maze

The Zebrafish Plus Maze is used to analyze associative learning behavior in zebrafish. The subjects are tested for their ability to associate the visual cue with the rewarding unconditioned stimuli while swimming in the maze. The apparatus is similar to the non-spatial version of the Radial arm maze used for rodents. The plus maze is used in studying the mechanisms and chemicals involved in the acquisition, consolidation, and retrieval of the learned information.

Learning and memory function is governed by complex neurobiological mechanisms and structures in the brain. Drugs that can impair the learning ability in human beings are studied for their potential pharmacological action on animal models. The zebrafish is a classic animal model for studying underlying processes and disruption in learning behavior. The zebrafish plus maze can be used for analyzing synaptic and molecular mechanisms necessary for the formation of associative learning.

The zebrafish plus maze is a plus-shaped maze consisting of five compartments. The maze is equipped with stimulus tanks for holding unconditioned stimuli. The sight of zebrafish conspecifics from the stimulus tanks acts as a non-satiating reinforcement that improves subjects’ performance. Other apparatus used to assess learning and memory function in zebrafish are Zebrafish Associative Learning, Zebrafish T Maze and Zebrafish 3 Chamber Choice.

The zebrafish plus maze is a “+” shaped maze that contains four end compartments and one central compartment. The height of the maze in 10 cm and is composed of transparent acrylic. The dimensions of end compartments are 35 x 25cm. Each compartment is provided with a stimulus tank measuring 20 cm in length, 10 cm in width and having 10 cm depth. The stimulus tanks have their three sides opaque (1 red tank and three white tanks) such that the stimulus held in them is only visible once the subject enters the corresponding end arm compartment. The central compartment of the maze consists of a removable start box measuring 10 x 10 cm.

Clean the apparatus thoroughly before starting the experiment. An external tracking and recording systems such as Noldus Ethovision XT can be used with the plus maze for recording the fish activity.

Place the fishes in the plus maze for 2 hours to acclimatize with the maze. During this period of habituation, do not introduce any stimuli in the maze. Repeat the process of habituation for at least 4 days.

Place the zebrafish conspecifics in the red stimulus tank of the target compartment. Keep the stimulus tanks of the remaining three compartments empty.  Place one subject at a time in the start box. After 30 seconds of acclimation, lift the start box and allow the fish to explore the maze for 5 minutes. Perform at least 4 trials per day with an inter-trial interval of 2 minutes. Perform at least 4 sessions for 4 days.

For the probe trial, do not place zebrafish conspecifics in any of the stimulus compartments. Place the experimental fish in the start box. After 30 seconds of acclimation, lift the box and observe the fish’s performance for 5 minutes.

Sison & Gerlai (2011) assessed the effect of MK-801 on zebrafish learning ability in the Zebrafish Plus Maze. The subjects were reared in seven groups of which six represented experimental groups, and one group acted as a control. The experimental groups were exposed to 20 µM concentrations of MK-801. The drug was given at three exposure times; before the first training session, after the last training session and immediately before the probe trial. The control group received 0µM MK-801 and exposed to red stimulus tank (conditioned, CS) and zebrafish conspecifics (unconditioned, US) stimuli separately. Results indicated that MK-801 impaired subject memory performance after training. No disruption in memory was observed when the drug was administered before training. Controls that were exposed to the CS-US pairing spent 25-30% time in the target compartment, whereas, the control group which was not exposed to CS-US pairing spent 8% of the time in the target compartment. Administration of 20µM MK-801 showed significantly impaired memory as evident from the decrease in the percentage time spent in the target compartment after training trials.

Following parameters can be observed by using zebrafish plus maze

The zebrafish plus maze is a simple apparatus that offers reliable results for performing associative learning tasks. The use of zebrafish conspecifics as stimulus offers a non-satiating reinforcement as opposed to food rewards. The use of opaque walls in the stimulus chambers ensures that the stimuli are only visible when the subject completely enters the chamber. This ensures that the stimulus doesn’t influence the task prior to being initiated. Additionally, the colors of the stimulus tank walls also function as visual cues. The apparatus can be easily modified to meet different investigatory needs.

The zebrafish plus maze task is labor-intensive and time-consuming. The scalability of the apparatus is also low as it requires continuous experimenter intervention during the trial. Cleaning of the apparatus is important to prevent chances of lingering olfactory cues from affecting the fish performances. Careful handling of subjects is required since mishandling may induce stress in the subjects. External disturbances such as olfactory and visual cues can impact task performances. Factors such as the age, gender and the subjects exploratory drive can also affect performance.

Request a Zebrafish Plus Maze