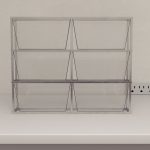 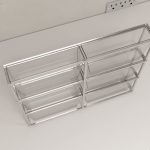 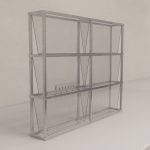 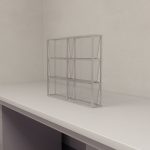 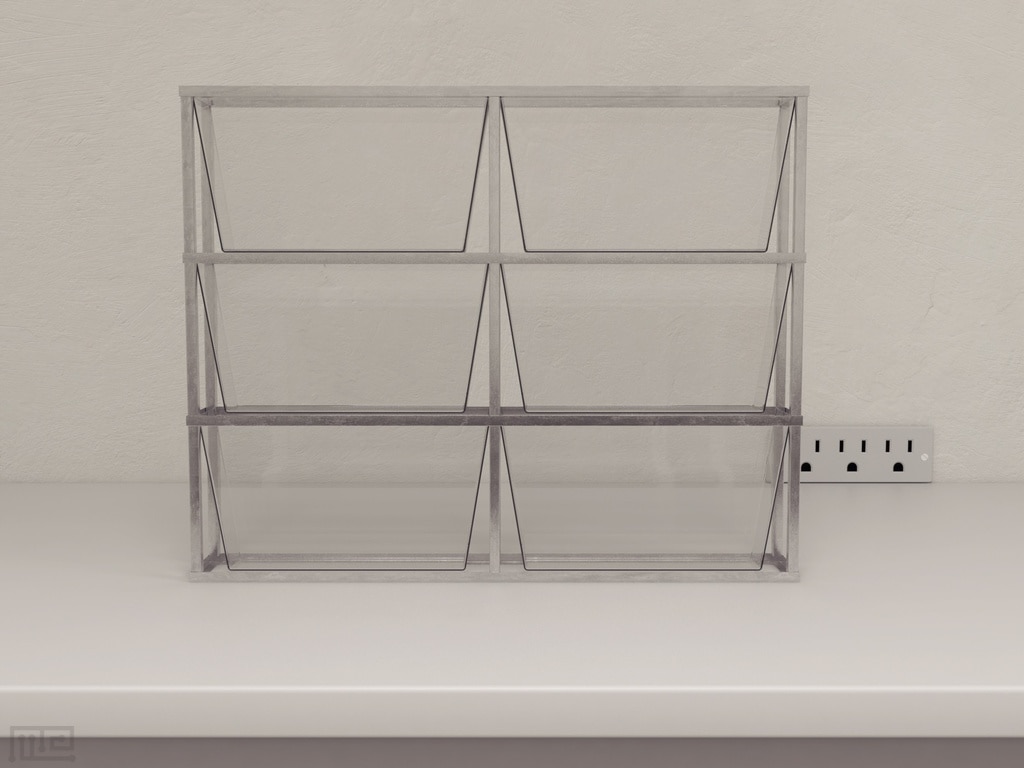 The MazeEngineers Vertical Tank Array is used for anxiety experiments for Zebrafish. Vertical diving behavior is used to assess anxiety in zebrafish. Narrow tanks minimize horizontal movement to maximize the behavior assessment.Each tank holds 1.5L in a trapezoid pattern. Set of 6 arrays come together with a housing apparatus for easy video grading.

The novel tank exploits the instinctive behavior of the zebrafish to find a safe place in an alien environment by diving and remaining at the bottom until they feel safe enough to explore. (Best, J.D. et al. 2008)

After gradual adaptation with the novel environment, the locomotion activity is increased significantly. This enhanced locomotion is manifested by increased movement, diminished freezing and more entries to the upper portion of the tank. (Wong, K, et al.2009; Stewart, A. et al.2010)

These responses are much similar to the rodent open test field, in which rodents depict anxiety-like behavior by residing near the walls (thigmotaxis), but after becoming less stressed move to the central area for exploration. (Choleris, E, et al., 2001; Bronikowski, A.M. et al. 2001)

The zebrafish model of nicotine effects is believed to play a significant role in determining nicotine addiction and remission. Their model also opened new avenues of analysis and research in nicotinic receptor mechanism.

Evaluation of anxiety in zebrafish is relatively a new concept. Peitsaro et.al established the concept that the zebrafish swim along the edges of the novel tank and previous experience in the environment reduce the time spent near the walls. However, they did not evaluate the vertical location choices of the subjects.

The tank is wide at the top approx. 6.4 cm while narrowed to approx. 5.1 cm at the bottom.

The tank can hold up to 1.5 liters of water, and it should rest on a leveled stable surface.

The activity is recorded with the help of a video tracker such as Noldus Ethovision XT, which is placed approx. 51 cm from the apparatus.

The purpose of the novel tank task is to evaluate behavioral indices of anxiety in zebrafish in a vehicle-treated control vs. disease model/intervention group, by assessing their swimming activity inside the novel tank.

The subjects must be experimentally naive. Before testing, the subjects should be given at least 2 weeks to acclimate to the new environment. The water temperature is maintained at approximately 28.5 °C, and the subjects are kept in 12-12 hour light/dark cycle.

The subjects are usually housed in groups of 20-30 in home tanks containing recirculating deionized water, and fed with flakes or brine shrimp twice a day.

The subjects are transferred from their home tanks to the experimental room 1 hour before testing; to lessen crowding stress. There should be no more than four subjects per liter of water.

Evaluation of behavioral indices of anxiety

Before the start of the experiment, the novel tank is positioned in front of the Noldus Ethovision XT for ideal video recording. Ensure that almost every area of the tank is properly illuminated.

In multiple novel tank setups, each tank is separated by a colored opaque partition so that the subjects can’t see each other during the testing period.

The subjects are gently transferred into the novel tank by lifting them with the aid of a net (one fish at a time), gently steering the net to allow the fish to swim out. After the subject is introduced into the novel tank, the experiment is run for the desired length usually 5-6 minutes to evaluate the subject’s behavioral indicators of anxiety.

The time spent in each virtual zone horizontally and swim path length are considered as dependent measures. The choice of the position is taken as the index of anxiety.

A significant modification of the novel tank paradigm was made by Jonathan Cachat et.al in 2010. They modified the task by dividing the tank into two virtual zones; namely, top and bottom to make the protocol more efficient in terms of measuring the zebrafish’s anxiety-like behavior.

The tank was divided into two equal virtual portions (horizontal), marked by a dividing line on the external walls of the tank.

The sample data compared the behavioral indices of anxiety in vehicle treated control group and drug administered (nicotine) group in terms of time. It is evident from the graph that nicotine caused decreased freezing bouts and erratic movements, whereas increased the exploratory capacity (locomotion) of the subjects under study. 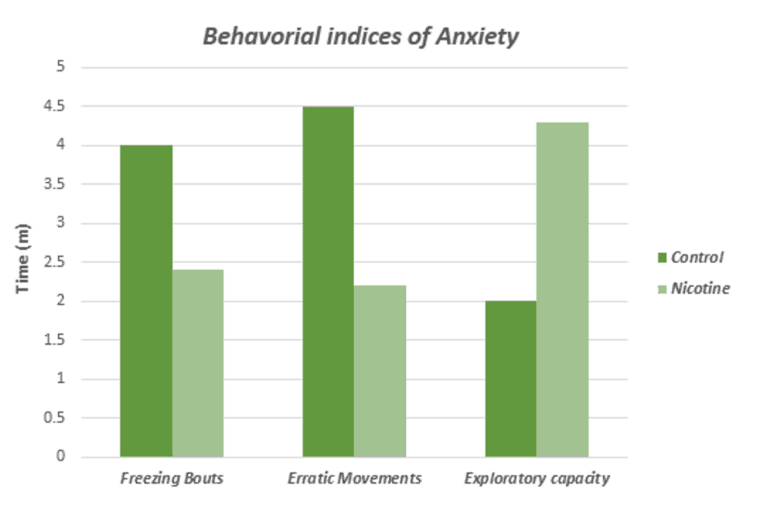 The novel tank anxiety task is an exceptional assay for drug screening as anxiety-like behavior can be regulated by anxiogenic and anxiolytic agents. (Egan, R.J. et al. 2009)

This model is an easy, economical and effective substitute for other methods that quantify stress responses in zebrafish.

The novel tank protocol is a useful paradigm for examining the array of neurobehavioral functions such as reward and cognitive function. (Bencan, Z, et al. 2009)

The task has enabled rapid evaluation and analysis of large amounts of data.

The model fails to determine all anxiety behaviors like scototaxis or dark/light preference, and all behavioral domains like drug reward properties.

This protocol is suitable for studying anxiety-like behavioral aspects in adult zebrafish. Novel tank test is not applicable to larval zebrafish models.