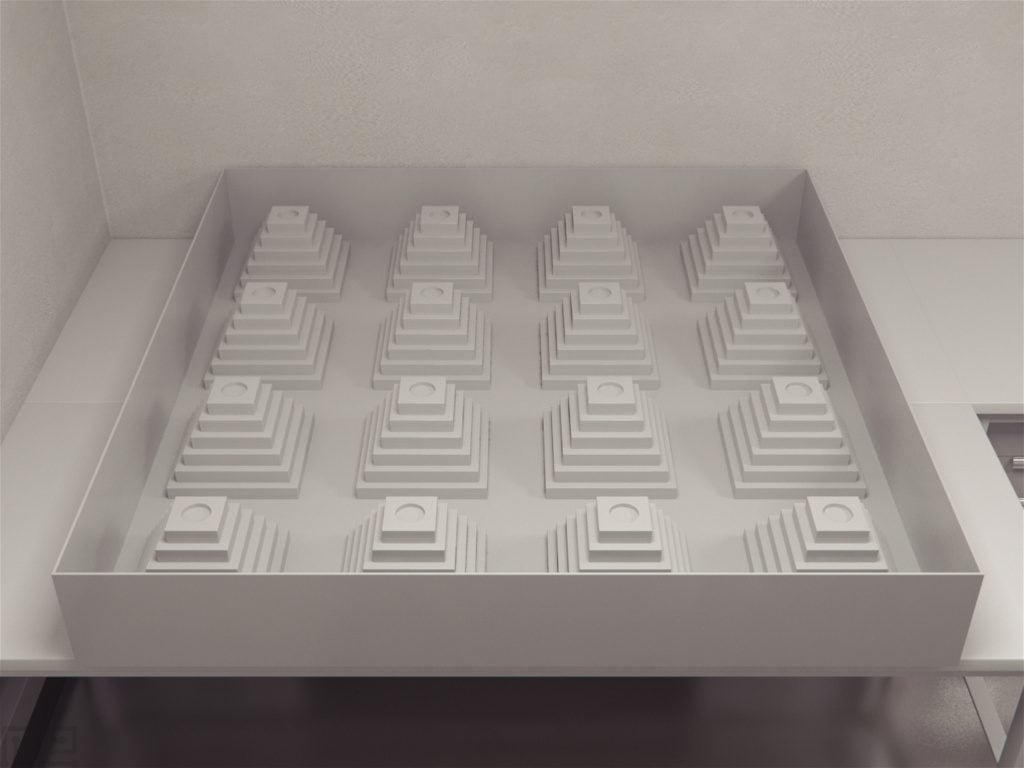 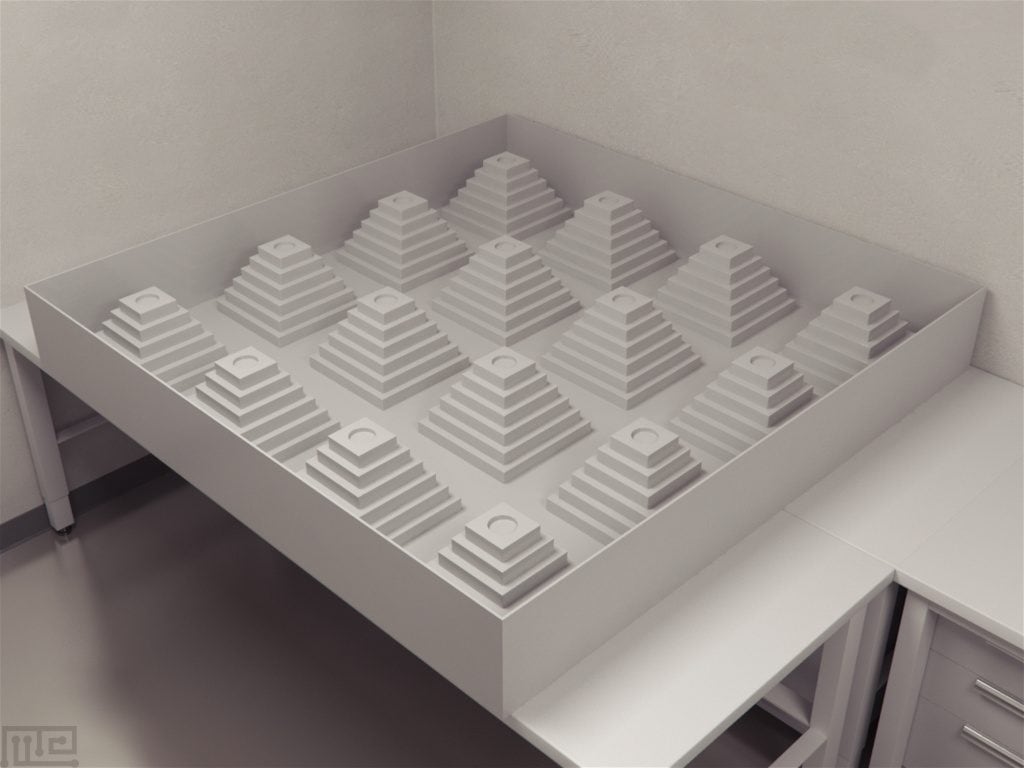 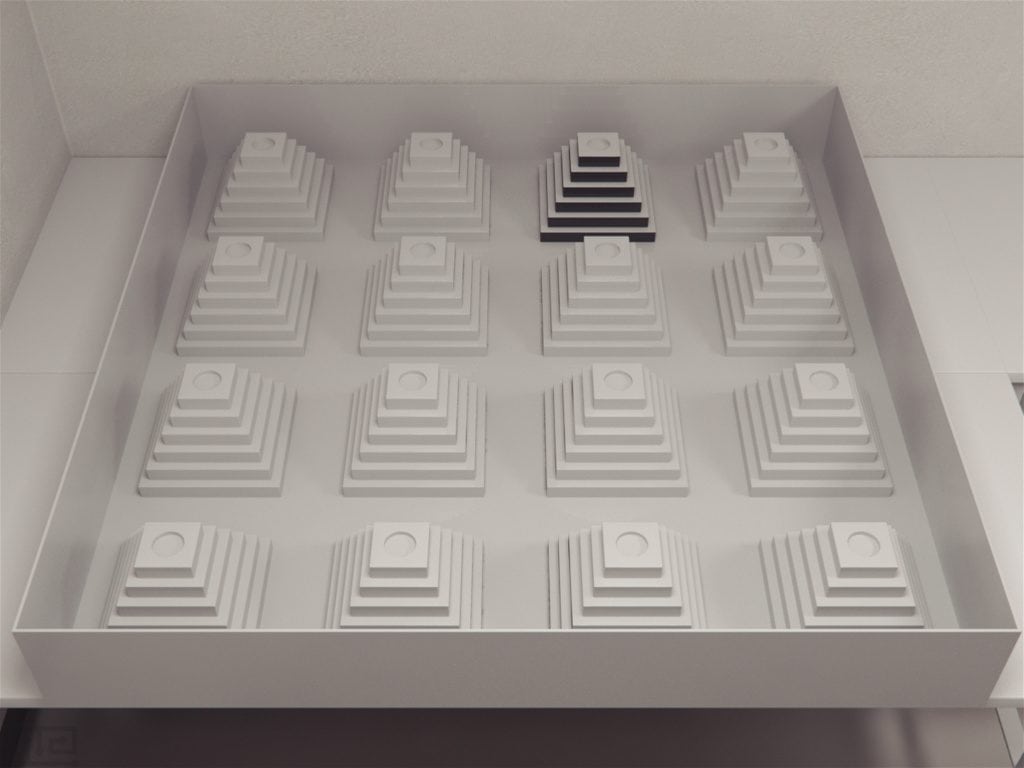 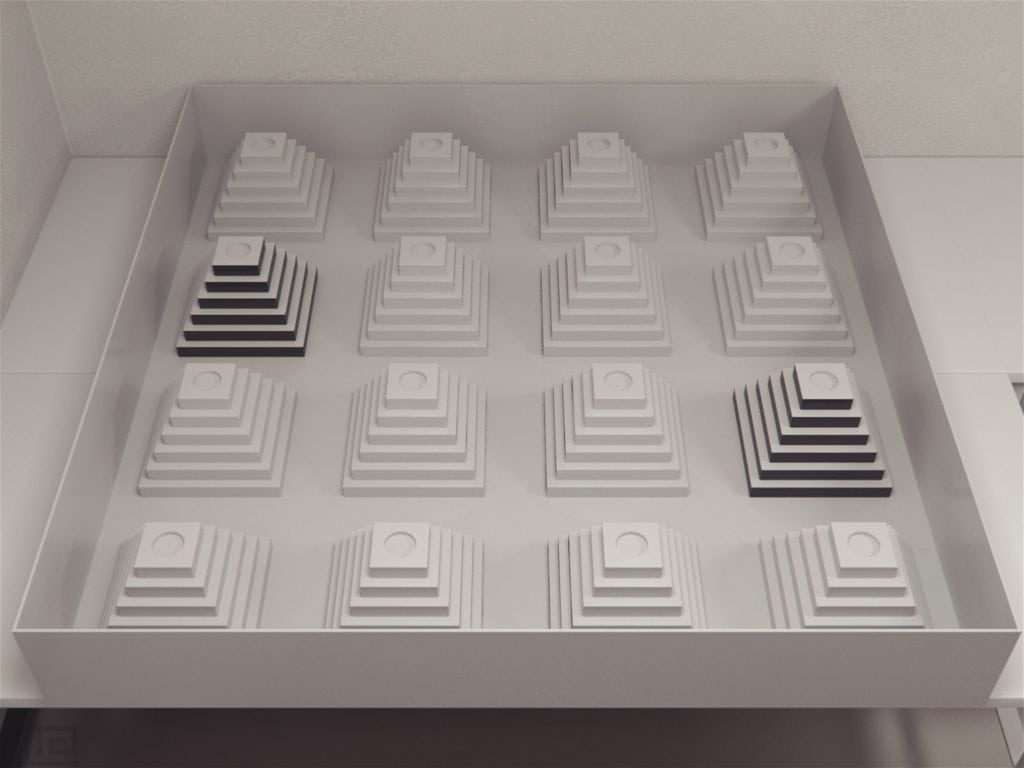 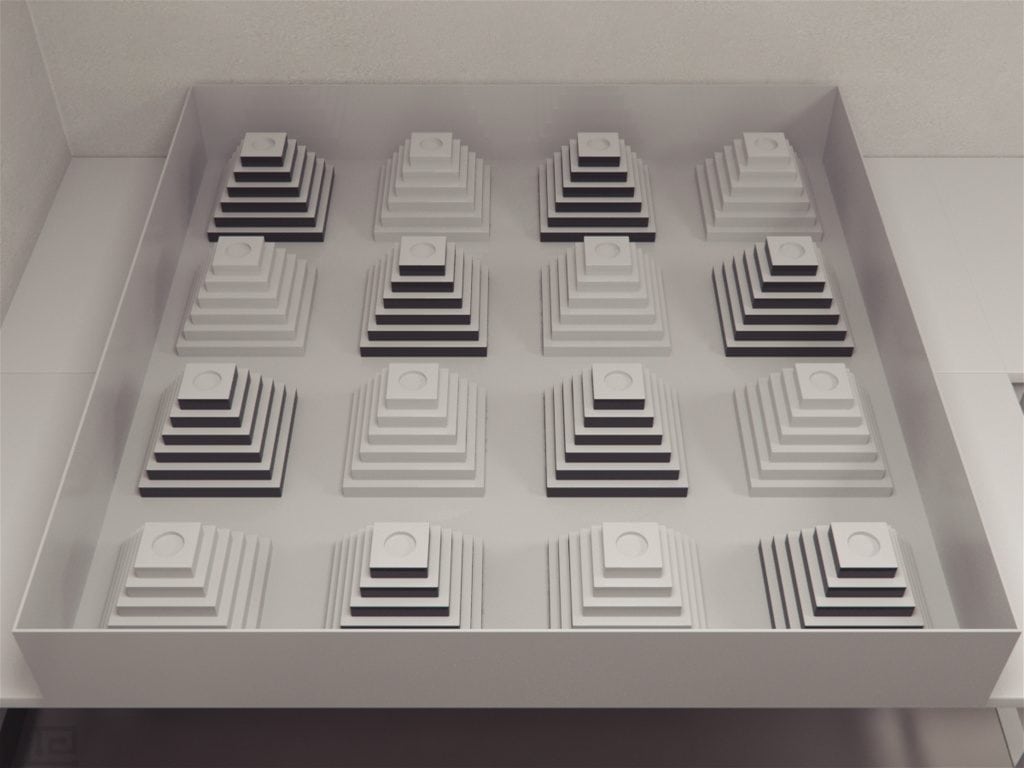 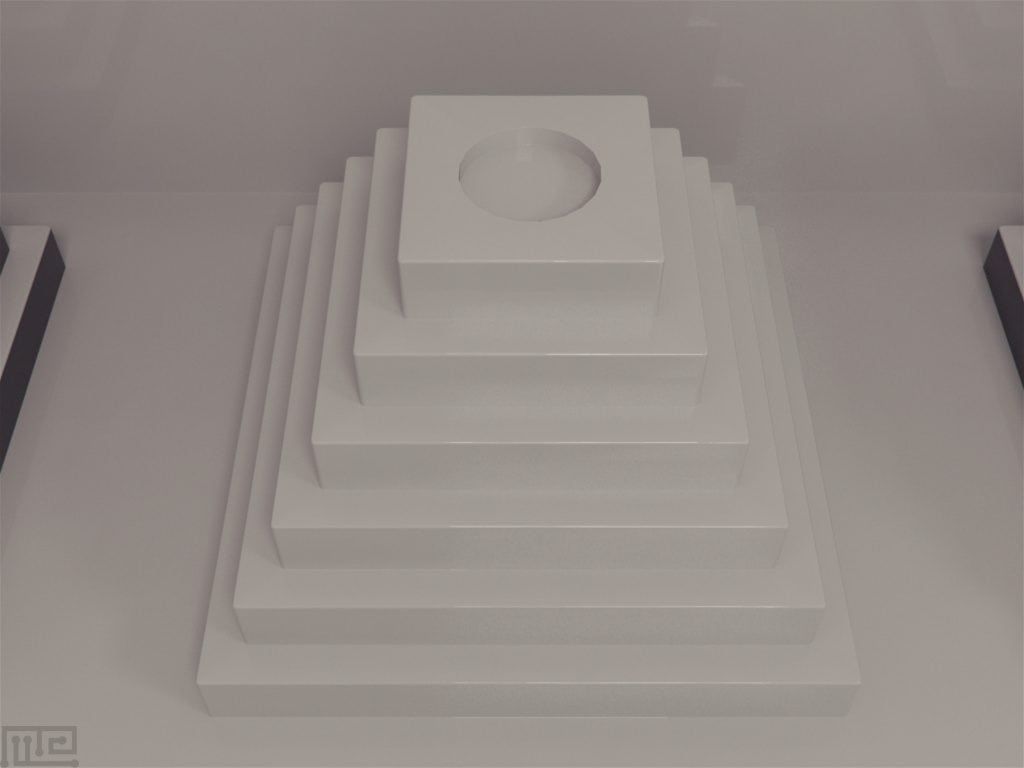 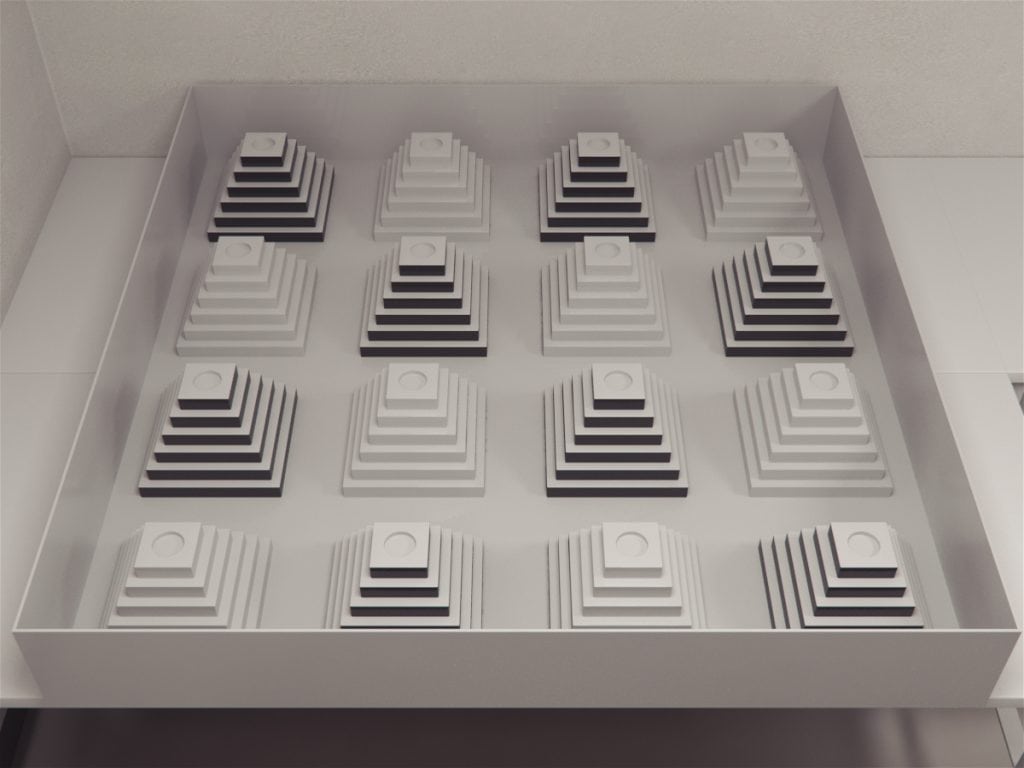 The Ziggurat task (ZT) was originally described in the literature by Faraji et al as a 10-trial spatial learning protocol over the course of 4 days in cerebral ischemia. It can be baited with dried spaghetti in order to encourage rewarded learning.

The MazeEngineers apparatus version comes with both White and Black Ziggurat sets and an open field chamber. Individual Ziggurats can be customized and ordered upon request.

Ziggurat Task is a novel approach to assessing the spatial memory and navigation of the subject. The task serves as an efficient approach to measuring hippocampus-dependent spatial performances with very little training and without the disadvantages associated with other behavioral tests.

In comparison to other behavioral tests such as the Radial Arm Maze and Morris Water Task, the Ziggurat Task does not use a constrained environment with limited choices nor employs escape motivation. The Ziggurat Task integrates the advantage of the Cheeseboard Task by using a dry land environment and distal/proximal cues. The task mimics the natural environment of the subject by using Ziggurat Pyramids that create even-uneven surfaces for the subject to explore. By using positive reinforcement and using Ziggurat Pyramids, that may act as shelters for the subject; the task helps reduce anxiety in the subject and improves the quality of the investigation.

The apparatus consists of an open-field with 16 equally spaced Ziggurat Pyramids which can be baited with food cues. The even-uneven field forces the subjects to make use of complex cognitive strategies with deeper evaluation of spatial navigation task.

The Styrofoam ziggurats are identical and are arranged in a 4 x 4 matrix, equidistant from one another. Clear duct tape is used to cover the entire pyramid. Each ziggurat has a total height of 21 cm and six successive levels of identical height (3.5 cm) successively reducing by 2 cm. The base level measures 31 cm2 and the highest level measures 11 cm2. The last level is provisioned with a circular hole, of diameter 1.5 cm and depth of 1 cm, in its center. The hole serves as a holder for food cues. Each of the ziggurats is also allocated a number.

Subjects are housed under 12:12 hr light/dark cycle at a temperature of 22oC. The test is performed during the light cycle and subjects are food deprived 1 week prior to the habituation sessions and behavioral testing, with water being provided ad libitum. Throughout the testing, the subjects are maintained at 85% of their initial body weight and divided into two groups.

Initial training sessions are carried over a period of 4 days. For the first two days, every ziggurat contained food cues and the subjects are individually allowed to explore the apparatus for 10 minutes freely. Day three, only half the ziggurats are baited, and subjects are allowed to explore the apparatus for 7 minutes. For the final day of training and habituation, only a quarter of the ziggurats is baited. The subjects are placed on a corner ziggurat and allowed to traverse the maze for 5 minutes.

The data is recorded using a ceiling mounted camera such as the Noldus Ethovision XT. Before every test, the apparatus is completely cleaned using 5% alcohol to minimize the influence of any residual olfactory cues.

Evaluation of effect of hippocampal lesions on learning and memory

Testing session is carried out over a period of 10 days. The task is carried out in cycles of learning days (odd days) and memory days (even days). For every odd day, the position of the goal ziggurat is changed, and the subjects are required to learn the new position for which they are then tested on the even days. (Faraji et al., 2008)

The corner ziggurats are allocated as start positions. Subjects are released from each of these start positions that are sampled twice according to a pseudorandom order. Subjects are placed on the top level of the start ziggurat, facing the wall. The non-start ziggurats made up the goal ziggurats, and for each testing session, only one of these ziggurats is baited. Each test session comprises of eight trials and lasts until the subject reaches the goal ziggurat or until 120 seconds are elapsed.

A probe test is conducted on the eleventh day as an additional measure of spatial memory performance. For this test, the apparatus is divided into four quadrants, and each subject is given three consecutive 70 seconds trials to reach the goal ziggurat. For the first trial, a baited ziggurat is used while for the proceeding two trials none of the ziggurats are baited. The subject’s movement is tracked using an automated recording device such as Noldus Ethovision XT.

To eliminate the possibility of non-cognitive factors influencing the performance of the subject in the Ziggurat Task, the subjects are tested in an 11 block cued navigation task on the twelfth day. The task uses goal ziggurats that are covered in black tape and placed in a position that is not used in earlier sessions.

During the probe trials data is also collected for mean percentage of time spent exploring the four quadrants. The path chosen by the subject also reveals significant information on the dynamics of spatial performances. The returns and path perseveration reflect the new spatial relation created or discovered by the subject.

The following graph depicts sample data for the mean path length taken by the control group and the group with hippocampus lesion to reach the goal ziggurat during each testing day.

Ziggurat Task’s even-uneven surface successfully simulates the natural habitat of the rodents. It serves as a sensitive and efficient dry task for measuring spatial performance with little training. Unlike other behavioral tests that constrict the subject’s choices or induce anxiety, Ziggurat Task allows subjects to explore the apparatus with minimal stress freely. Besides, this paradigm can distinguish between spatial (cued ziggurats) and non-spatial (non-cued ziggurats). It has been demonstrated that water maze task training for working memory leads to increased levels of circulating corticosterone, followed by diminished neurogenesis in the hippocampus (Mohapel et al., 2006), even after as much as four days of training (Aztiria et al., 2007). The Ziggurat task can serve as an ideal paradigm for studies which seek to eliminate HPC degeneration as a possible confounding factor.

The performance of the subject may be affected by deficits in visual acuity, motor function or other non-cognitive factors. Subject’s poor memory or spatial learning ability may also influence the results. Over-training may also result in erroneous results.