RIIIS/J, also known as R3, is an inbred mouse model that displays symptoms similar to Von Willebrand disease in humans.[1]

The R3 strain is descended from a stock of mice kept at the Institut de Radium in Paris in the 1920s along with the rest of the RIII family of stains. R3 arose specifically from a series of crosses carried out in 1967: first, an RIII/AnJ and a SEC/1ReJ were crossed, then the offspring were backcrossed to RIII/AnJ, and then finally the descendants were crossed with RIII/J.

Inbreeding then proceeded for many generations. The strain was known as RIII/2J until the name was changed to the current one in 1979.[1]

R3 mice have small kidneys for their body weight.[2] 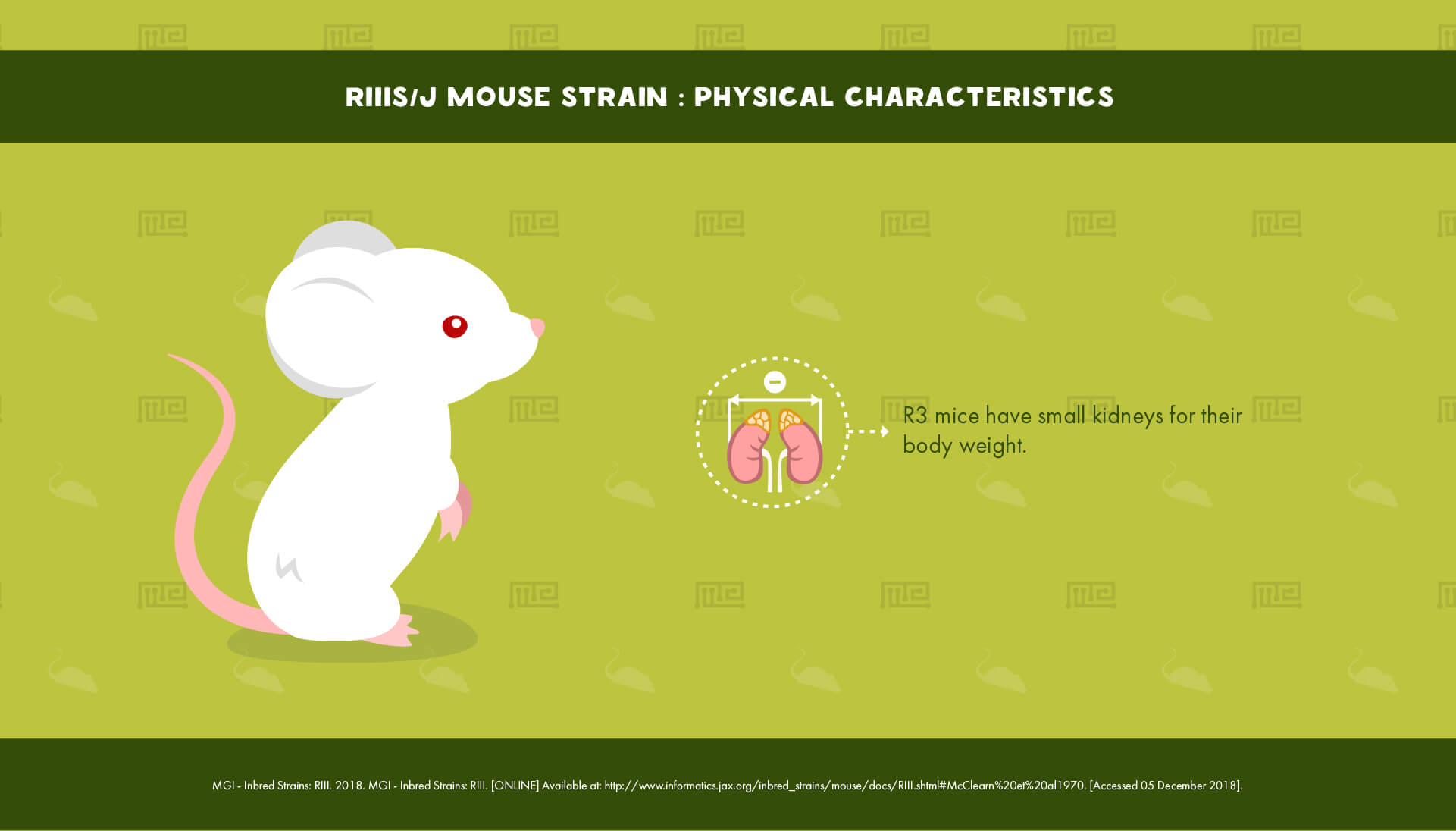 The Jackson Laboratory Handbook cautions that the mice of this strain are poor breeders and that their young are often stillborn. No information on the handling of this strain could be found. Researchers requiring a highly docile strain may want to avoid this strain as a precautionary measure.[4]

One study reports that R3 mice show high rearing and high activity in the Y maze test.[5] Another study claims medium distance traveled by these mice in the open field, as well as extremely low immobility in the forced swim test.[6] The R3 strain then appears to show a high preference for locomotion and exploration and may show low depressive-like behavior (although it is difficult here to disentangle locomotion from mood).

R3 mice show protracted bleeding (with normal platelet activity) as a result of having severely low levels of Von Willebrand factor antigen and factor VIII:C in the plasma. Crossbreeding shows that the prolonged bleeding trait is autosomal, dominant, and has incomplete penetrance.

This strain also displays immunological abnormalities: they have an abnormally low antibody response to bacterial polysaccharide, have low levels of B lymphocytes, and are resistant to developing collagen-induced arthritis. Despite these immune deficiencies, they also show autoimmune myasthenia gravis.

R3 mice frequently develop mammary and ovarian tumors but develop fewer lung tumors than A/J or SWR/J. They show resistance to chemically induced tumors, including diethylstilbesterol-cholesterol-induced testicular tumors. Their lifespan is long, at around two years for both genders.[1][2]

Their spontaneously acquired ldis1 mutation disrupts the development of the lens of the eye, and leads to cataract formation, worsening this strain’s vision over the course of their lifespan. The mutation is on chromosome 8 and its mechanism of action is unknown, although it may involve transforming growth factor (TGF).[3] 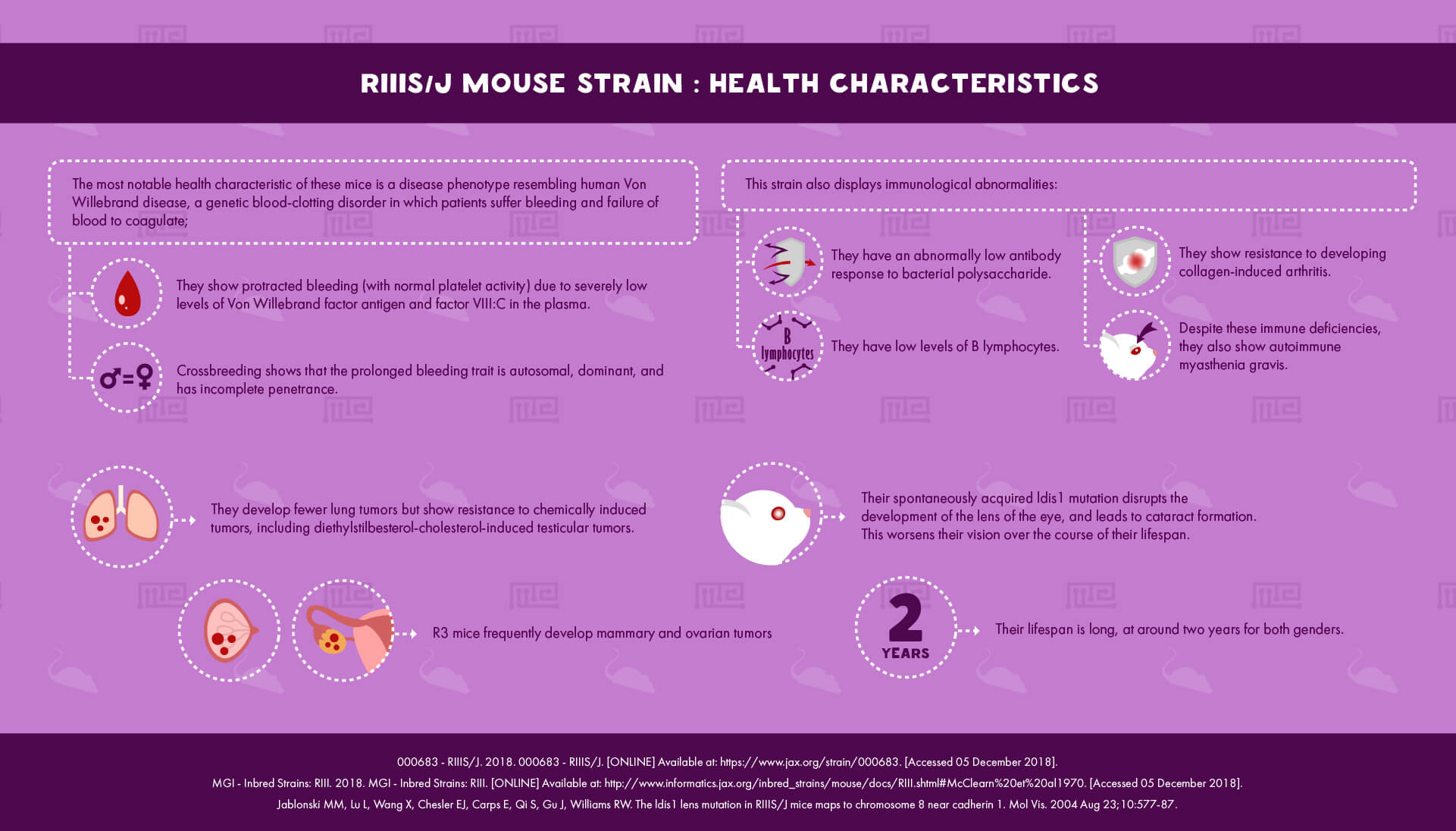 Given their disease phenotype, R3 mice are of greatest interest as a model for human Von Willebrand disease. They can also be applied to research into autoimmunity, immune deficiency, visual defects, and cancer.[1]