Depression is one of the most studied psychological disorders and a lot of the behavioral work has been done in mice and rats. Before we explore a behavioral test of depression, we need to first understand that mice and rats don’t really express or experience depression the way that humans do. The diagnostic criteria for depression includes loss of pleasure in daily activities, changes in mood, weight changes, changes in sleep and activity, guilt/worthlessness, etc. Some of these can be seen in mice, such as weight change or change in motor activity. But the more intimate psychological feelings aren’t really expressed in rodents, at least in a manner that we can understand and measure. So

What is the Tail Suspension Test?

The tail suspension test apparatus is a large box that has a hook hanging down from the top. The hook is where we tape the rodents’ tail. It’s also placed in such a way that when the mouse is hanging, it will be unable to touch the other walls of the compartment. The tape that is used should be strong enough to prevent the mouse from falling and should not damage the skin of the tail. The tail of the mouse, close to the tip, is taped and attached to the hook, elevating it in the air.

The typical tail suspension test goes for about 6 minutes and the duration of agitation vs. immobility is recorded[1]. The agitation period is the period in which the mouse twists and curls to try to free itself from the hook, because it feels uncomfortable to be hung upside-down. The immobile period is that period when the mouse basically gives up and stops trying to free itself. That feeling of giving up and not caring that it’s stuck in a trap is what we can consider to be a depressive-like behavior. Even though humans don’t ever experience anything like the tail suspension test, depressive feelings can show up as giving up on tasks easily and a sort of learned helplessness that can show up in a variety of animals. 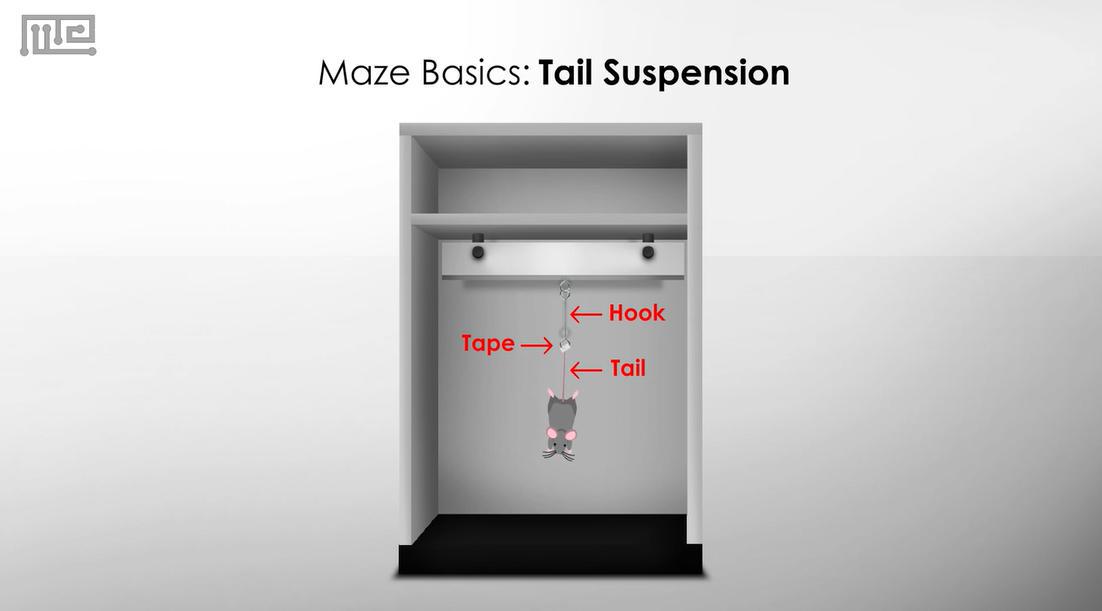 How to Analyze the Data

Now that we’ve got the recordings of the animal during the test, we need to code the mouse’s behavior. It’s hard to measure immobile time directly because it’s really measuring the lack of movement. So, Can et al. have found that it’s easier to measure the active movements. Active movements include shaking, reaching, trying to run. As the mice start to tire out, the movements become subtler until just the front legs are moving, which to them, does not count as active movement. If the mice are just swinging as a result of previous movements, it’s also not considered as an active movement[2]. Since the protocol goes for a predetermined amount of time, by measuring the amount of time engaged in active movement, we can then subtract and figure out the immobile time.

Applications of the Tail Suspension Test

The tail suspension test is great for measuring acute depression. But what makes this test so useful is its measure of how effective anti-depressant drugs are. Various types of antidepressant drugs, such as tricyclics, selective serotonin reuptake inhibitors (SSRI’s) and monoamine oxidase inhibitors (MAOI’s), psychostimulants, neuroleptics, anxiolytics, and more have been tested using the tail suspension test.[3] One study looked at the effects of antidepressants imipramine, desipramine, fluoxetine, and venlafaxine at different concentrations.[4] They found that imipramine and desipramine reduced the duration of immobility compared to the controls at all dosages. In addition, as the concentration of the doses increased, the duration of immobility decreased. But, fluoxetine and venlafaxine were only significant at certain concentrations, even though it followed the same patterns of decreasing the immobile durations. This study, and the plethora of other studies on antidepressants shows two main things. 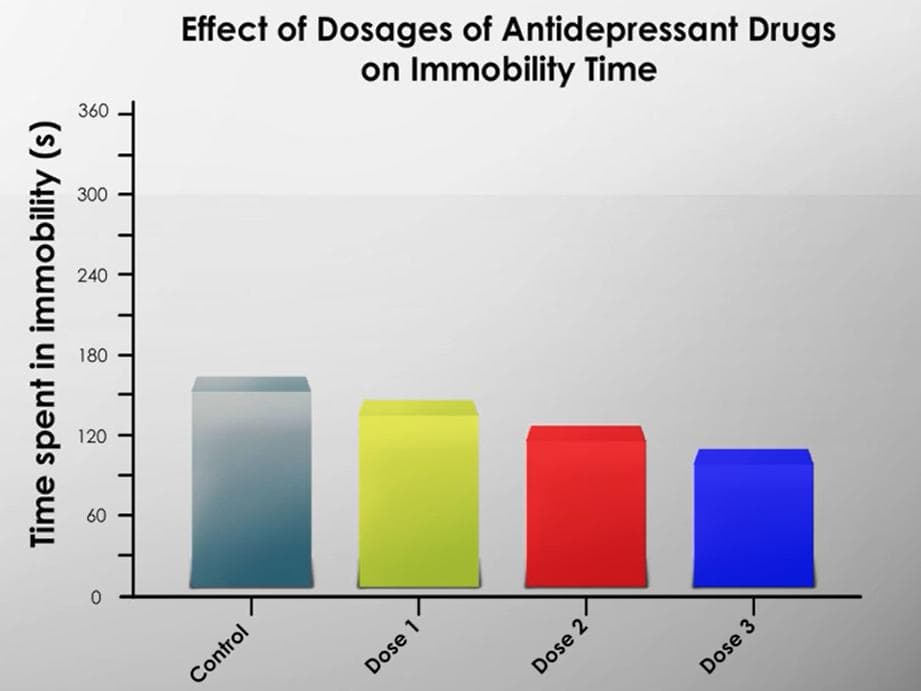 The tail suspension test is often compared to the forced swim test, which also induces “behavioral despair” similar to the immobile period. In the forced swim test, the mouse is forced to tread water to prevent drowning. As the test continues, the mouse will begin to give up and move just enough such that its head doesn’t dip below the water. The tail suspension test is now often preferred because it doesn’t produce hypothermia for the mice. In addition, the tail suspension test is video recorded and can be scored automatically instead of relying on human observation through the water. Also, the test as shown in the study mentioned, is more sensitive to lower concentrations of drugs [1].

There is a matter of translation from rodent to human. Humans with depression tend to need chronic treatments with antidepressant drugs, and the tail suspension test is sensitive to short-term drug effects[5]. Therefore, more research needs to be done on the long-term application. In addition, different strains of mice can have different success at the tail suspension test naturally, so that’s another aspect that needs to be taken into consideration.

What You Should Know

All in all, the tail suspension test is simple, short, and easy to code. This makes it a very commonly used test to study depressive-like behavior in rodents. Its sensitivity to drugs that humans use to treat our own depressive symptoms makes this test especially important in pharmacological research.