Olfaction, more commonly known as a sense of smell, is ubiquitous in the animal kingdom and central to the life of many creatures. Mice for example rely on olfaction to forage for food, find mating partners and escape from predation. Even in humans, who tend to rely a lot more on sight and hearing than on smell, olfaction is important, helping us to avoid spoiled food and maintain cleanliness.

While diseases of olfaction in humans are not frequently discussed, they are thought to be quite common: population studies show that up to a quarter of people may possess some kind of olfactory dysfunction.[1] This proportion is expected to rise with an ageing population, since olfactory disorders are more common in the elderly. Such disorders can significantly lower quality of life.

As in many other areas of medical research, mouse models can be used to investigate the pathology and treatment of olfactory disorders. In this article, we will begin with an overview of the neurobiology of olfaction, and a summary of the major diseases affecting this sensory modality, before proceeding to a discussion of the various experimental paradigms used to assess olfactory function in laboratory mice.

Olfaction and the Brain

All vertebrates have a similar olfactory system, consisting of a nose that takes odour molecules in, receptors that detect those molecules, nerves which carry signals from the receptors to the brain and specialised brain regions which interpret the signals and relay them to other relevant parts of the brain.[2]

The chamber inside the nose is lined with mucus which captures odour molecules after they drift in through the nostrils. These molecules move around in the mucus until they bind to a certain receptor. How these receptors recognise particular odour molecules is still not certain, but seems to involve a combination of the molecule’s shape and chemical properties, similar to how enzymes recognise their substrate.

The wall of the nasal cavity is an epithelium, a layer of cells covered in tiny hairs called cilia. Odour molecule receptors are embedded in the cell membrane of these cilia, which are in turn attached to the dendrites of neurons behind the nasal cavity wall. When odour molecules bind, the cilia transduce the chemical signal into an electrical impulse which travels down the dendrites, triggering an action potential in the olfactory neuron. The transduction occurs via second messenger systems, especially G protein coupled receptors and cAMP. 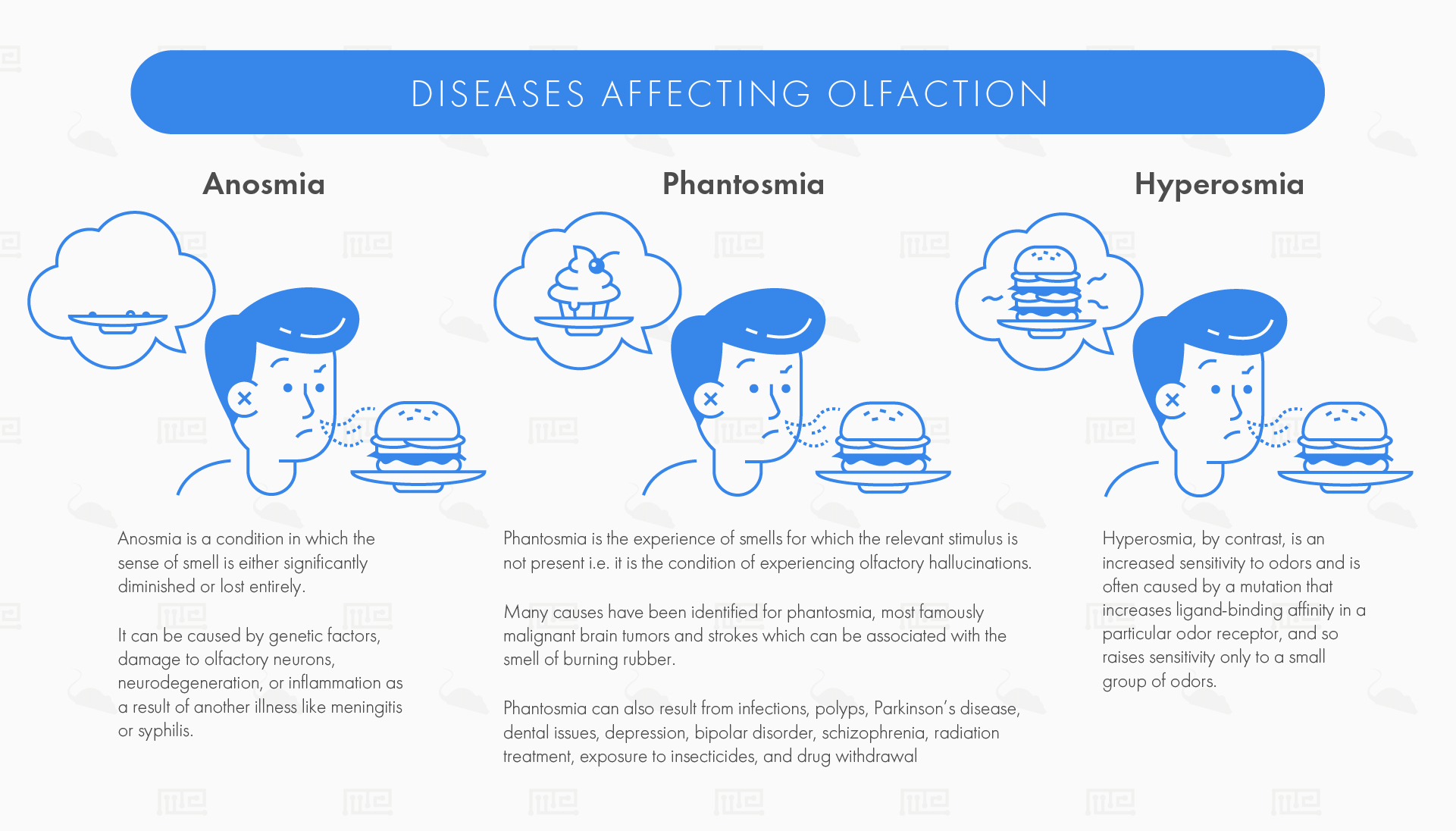 While disorders of olfaction are less frequently encountered than disorders of other senses (such as blindness and deafness), there are several main olfactory conditions seen in human patients. These disorders can also be modelled in mice for the purpose of scientific study.

Anosmia is a condition in which the sense of smell is either significantly diminished or lost entirely. Often the sense is lost in only one nostril (unilateral anosmia). This results in a number of lifestyle issues: first, since smell and taste are closely linked, anosmics also lose taste sensation and suffer diminished appetite. This loss of taste, combined with loss of the ability to smell pleasant odours such as flowers, can lead to depression.

Anosmia can be caused by genetic factors, damage to olfactory neurons, neurodegeneration, or inflammation as a result of another illness like meningitis or syphilis. Dietary and mood issues are less severe for congenital anosmics, although they can face social stigma. Anosmia can also pose some safety issues such as the inability to smell a gas leak or to detect when meat has expired.[3]

Hyperosmia, by contrast, is an increased sensitivity to odours. Hyperosmia is often caused by a mutation that increases ligand-binding affinity in a particular odour receptor, and so raises sensitivity only to a small group of odours. Hyperosmia may however also result from amphetamine use, possibly via loss of olfactory bulb dopaminergic neurons.[4]

Phantosmia is the experience of smells for which the relevant stimulus is not present i.e. it is the condition of experiencing olfactory hallucinations. Commonly the patient experiences unpleasant smells such as burning or putrefaction, in which case the condition is also known as cacosmia, and can severely impact the patient’s quality of life.

Many causes have been identified for phantosmia, most famously malignant brain tumors and strokes which can be associated with the smell of burning rubber. Phantosmia can also result from infections, polyps, Parkinson’s disease, dental issues, depression, bipolar disorder, schizophrenia, radiation treatment, exposure to insecticides, and drug withdrawal.[5]

More minor examples of olfactory disorders include parosmia, where the sufferer becomes temporarily incapable of perceiving the normal smell of certain items, presbyosmia where the sensitivity of smell declines due to old age, and olfactory agnosia, where a person is unable to recognise smells even though their olfaction otherwise seems perfectly functional.

Tests for Olfaction in Mice

A few major experimental protocols have been developed and standardised for evaluating olfactory function in mouse models.[6] In this section, we will detail how each of these protocols is performed, as well as discussing the benefits and downsides of each and mentioning a few things to consider when implementing them.

This test evaluates a mouse’s ability to tell the difference between an odour it has encountered before and a new odour. First, the mouse is presented with a cotton swab soaked in a neutral substance. The mouse will investigate the swab, and then gradually sniff it less as it becomes accustomed to the smell. Next, a second swab soaked in a different odorant is presented to the mouse; since this odorant is novel, we expect the rate of sniffing to greatly increase. No significant increase indicates failure of the mouse to discriminate.[6][7]

The olfactory preference test is very similar in method to the olfactory habituation and dishabituation test; again, each mouse is presented with two cotton swabs soaked in two different odorants. The major difference this time is that the two cotton swabs are presented simultaneously rather than sequentially. This allows experimenters to assess each mouse’s preference for one smell over the other by seeing whether the mice choose to sniff one cotton swab significantly more.[6][8]

The olfactory detection threshold test takes concentration of odorant as an independent variable, to see what the lowest concentration is at which the mouse can still perceive the smell. A cotton bud with the odorant of interest is presented alongside a cotton bud soaked in vehicle. If the mouse cannot detect the odorant, it will sniff the bud with the odorant an equal amount to the vehicle. The concentration of odorant is then increased exponentially until there is no longer a significant difference in sniffing between the two buds.[6]

This test evaluates a mouse’s ability to remember a particular odorant. The same odorant is presented twice with a certain time interval, and the number of sniffs is compared. Time intervals are then varied between different groups of mice. A significant reduction in sniffing from first to second presentation suggests the mouse remembers the odour. If so, the reduction should be less severe for increasing time intervals.[6]

This paradigm is very different from those previously mentioned, since it does not make use of cotton buds soaked in odorants. Instead, starved mice are presented with two different dishes full of sand, the sand soaked in different odorants. Only one of the dishes contains a food reward buried in the sand. The mouse must learn to use the odour as a cue in repeated trials to select the correct dish and dig to find the food.[6][9]

Olfaction is an important sense for humans and many other animals. However, the use of this sense is frequently threatened by common olfactory disorders, creating an urgent need for scientific investigation into the causes and cures of such disorders. Here we have discussed how a number of key experimental protocols allow researchers to use mouse models in that endeavour. It is hoped that this article will assist scientists in the further elucidation and treatment of olfactory pathologies.