The Rotarod Assay in Alzheimer’s Disease

The neurological disorder, Alzheimer’s disease (AD), is known as the most common form of dementia. The disease is characterized by the deposition of neural plaques and neurofibrillary tangles accompanied by a substantial degeneration of pyramidal neurons.[1]

The two main symptoms of Alzheimer’s disease are memory impairments and cognitive deficits. However, another non-cognitive impairment that is often associated with the disease is motor dysfunctions ranging from balance impairments and gait changes to disturbed activity levels.[2] Some studies claim that motor impairment might even show up before the clinical symptoms, which suggests a link between motor function and the development of the disease. In other words, the occurrence of motor dysfunction early in the disease process seems to possess a certain predictive value.[1]

Compared with the quantity of research on the characteristic cognitive decline during the course of AD, detailed analyses of motor performance in AD are limited. Studies experimenting with different rodent models expressing AD-associated genes found that defective axonal transport and resulting axonal degeneration seems to be causative for the motor deficit phenotype. Moreover, there is evidence for axonopathy occurring early in the disease process in human AD patients, which might explain early-on motor impairments.[1]

The cerebellum as a major player of motor control is important for regulation of balance and locomotion through practice. It is known that especially the rotarod task is able to detect motor disturbances through cerebellar dysfunction.[2] Therefore, many studies testing for general motor function in Tg mice models for Alzheimer’s include the rotarod acceleration test as a measure to accurately assess differences in motor abilities including balance, coordination, learning and performance due to the disease. However, results differ between studies, between model type and age.

Most studies evaluating motor performance in amyloid precursor protein (APP) transgenic mice by using the rotarod did not report major abnormalities.[1] For example, no significant difference in motor coordination and balance in hAPP mice was found in the study of Havas et al. (2016).[3]

In a study by Van Dam et al (2003), APP23 transgenic mice at 3 and 6 months of age showed a slight impairment in rotarod performance.[4] The difference in results could be due to the fact that Havas et al. (2016) used a different acceleration technique by going from 5 up to 60 rpm in 2 min, while Van Dam et al. (2003) used more gradual accelerations from 4 up to 40 rpm within 5 min. It is known that using very high acceleration rates could underestimate certain effects.

In another study by Lee et al. (2004), aged APP (homozygous) transgenic mice with the Swedish and Indiana mutations showed a significantly decreased rotarod performance especially after 11 months.[5] This shows that results can depend on which age group is used. They also used more gradual accelerations from 5 to 20 rpm for 3 min, which can also explain the difference in results. Moreover, Lee et al. (2004) designed slightly different mouse types to eliminate the potential phenotypic variations attributed to the compound genetic backgrounds adopted in most AD mouse models.

In a study by Wirth et al. (2008) APP/PS1 mice showed significant impairments in the rotarod, starting at the age of 6 months.[1] Ewers et al. (2006) found a deficiency in the rotarod task in 12-month-old APP/PS1 transgenic mice, without testing younger ages.[6] Kuwabara et al. (2014) showed a significant decrease in rotarod performance in 3 months-old mice compared to controls and these differences became worse with age (5-6 months old).[10]

Also, a significant reduction in rotarod performance was found in APP/PS1 transgenic mice expressing the exon 9 deletion variant at the age of 5 and 10 months compared with PS1 wild-type transgenic animals.[1]

No Rotarod Deficiency in APP/PS1 Mice

However, some studies using the rotarod on APP/PS1 did not find any deficiency in this task. For example, Lalonde et al. (2004) did not find any significant difference in rotarod performance in APP/PS1 mice. T

he differences in results might be due to protocol differences, e.g. Ewers et al. (2006) and Kuwabara et al. (2014) used two to three different constant speeds on the rotarod and Lalonde et al. (2004) used accelerated speeds from 4 – 40 rpm within 5 min trials.

In another study conducted by Webster et al. (2013), APP/PS1 KI mice did not show any motor deterioration, even at the older ages.[8] Also, they used accelerated speed from 0 – 40 rpm within 5 min. Additionally, they were pioneers in testing motor coordination with rotarod on APP/PS1 mouse models. These models were engineered using gene-targeted KI technology to introduce specific additional mutations, meaning that more testing is needed.[7]

The study of Wagner et al. (2019) observed decreased performance in the rotarod test in young Tg4-42 mice and a steady decline in performance with age.

Contrarily, Tg2567 mice did not show any impairment in the rotarod. They state that since Tg4-42 mice did not have altered muscle strength, impairments in the balance beam task and rotarod was rather due to learning and balance, coordination impairments than muscle function.[2]

Surprisingly, male and female 3xTg mice performed better in rotarod task compared to controls up to the age of 16 months but performance declined with age. Stover et al. (2015) suggest that tau P301L might be responsible for enhanced motor performance. Although, there are other tau mice studies that observed decreased performance in the rotarod.[2] This could mean that there is no direct correlation between the transgene and severity of motor deficits.

At 9-10 months, 5xFAD mice, which is a widely used model type for studying AD, showed impaired performance (motor coordination) on the rotarod compared to wild-type controls in the study of O’Leary et al. (2018).[9] 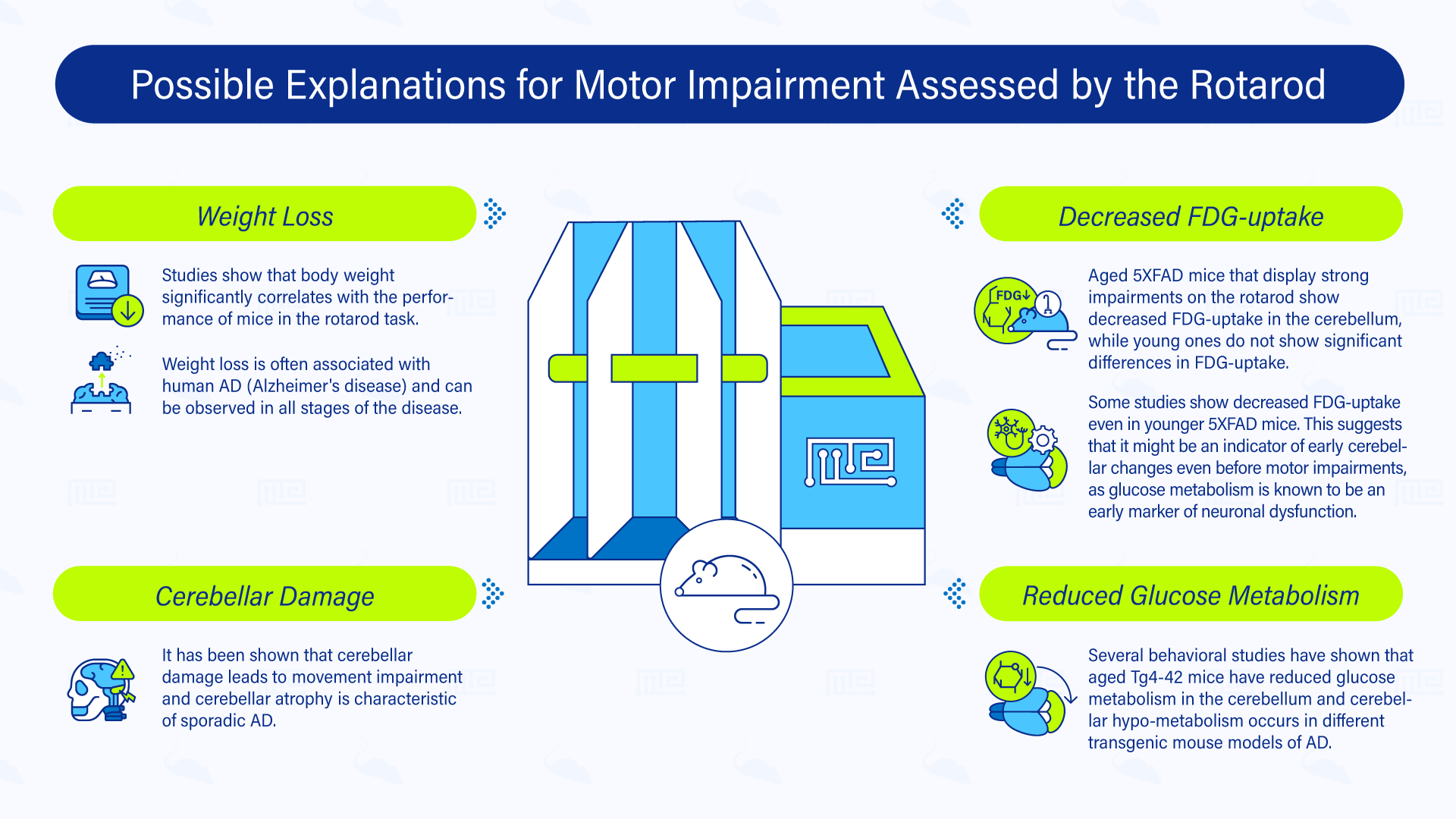 Possible Explanations for Motor Impairment Assessed by the Rotarod

The rotarod is mainly used to test motor coordination, motor learning, grip strength and balance in mice. However, unlike other behavioral tests, it does not seem to assess general motor activity and muscle strength.[2]

One of the possible explanations for coordination/balance impairment is weight loss associated with Alzheimer’s disease. Previous studies showed that body weight significantly correlates with the performance of mice in the rotarod task. In mice models for AD a reduction of body weight has been described, especially in mouse models overexpressing APP. Moreover, 9-month-old 5XFAD mice have been shown to have a significantly reduced body weight in comparison to their wild-type littermate. Weight loss is often associated with human AD and can be observed in all stages of the disease.[2]

Several behavioral studies have shown that aged Tg4-42 mice have reduced glucose metabolism in the cerebellum. In addition, earlier 18F-FDG-PET studies showed that cerebellar hypo-metabolism occurs in different transgenic mouse models of AD. Also, intraneuronal Aβ accumulation in the spinal cord of Tg4-42 mice have been described previously and might explain motor deficits.[2]

Moreover, aged 5XFAD mice, that display strong impairments on the rotarod, showed decreased FDG-uptake in the cerebellum while young ones did not show significant differences in FDG-uptake, which is in line with the fact that they performed the same as wild-type mice. Other studies, like the one from Wagner et al. (2019), show decreased FDG-uptake even in younger 5XFAD mice. Suggesting that it might be an indicator of early cerebellar changes even before motor impairments,  as glucose metabolism is known to be an early marker of neuronal dysfunction.[2]

Besides studying the known cognitive impairments occurring during the process of Alzheimer’s disease, increasing research is done about the motor impairments associated with the disease. A practical tool to assess motor impairments is the rotarod test among others. It is important to know that rotarod performance in transgenic mice associated with Alzheimer’s disease differs depending on the model type. Specifically, depending on which AD-associated gene is expressed (e.g. tau or amyloid precursor protein) deterioration of motor function will start with younger or older individuals or will not be observed at all. Importantly, accurate clinical assessment of motor deficits is needed as it might represent a valuable marker for early diagnosis of AD. On top of that, it is important to study mouse models expressing AD-associated genes as they might help to truly understand the underlying pathological alterations leading to motor impairment.

In general, APP single-transgenic mice seem to show increased locomotor activity at young ages, whereas mouse models with multiple mutations develop impairments at an older age. These impairments could be interpreted by the co-occurring weight loss that transgenic AD mice experience, especially in mice types that overexpress APP. Although, the most likely explanation for rotarod performance impairment of transgenic mice is impaired cerebral activity. What is necessary to keep in mind is that rotarod performance outcome might be altered depending on the protocol, age group and model type. Consistency of protocols throughout the study of AD mouse models is needed to improve inference and reproducibility.