If you haven’t seen the movie Concussion starring Will Smith, I’ll advise you check it out. Traumatic brain injury, TBI, is no stranger in the field of contact sports, and its consequences, no place in the hearts of loved ones. The way this injury manifests is by being struck on the head, and depending on the severity of the blow, complications may or may not arise. Thus, traumatic brain injury is regarded as a spectrum and not just one pathological disorder. The symptoms on this spectrum can range from mild to severe and in some cases fatal.

Naturally, scientists investigate this phenomenon, and what better place to do so than to study traumatic brain injury in sports. The movie I mentioned earlier revolves around injuries sustained to the head during American football, a heavily dependent contact sport. Why such a sport aggregated attention is no surprise when we look at the plethora of evidence that show the negative consequences. One specific form of TBI, called repetitive mild TBI, rmTBI, has accumulated large spectators because of its profound impact on an individual’s health and well-being [1]. The characteristic of rmTBI is unique compared to the general form of TBI due to the outcomes that arise from it. With repeated yet mild impacts, the brain does not suffer severe symptoms, and the individual seems normal after the impact. However, the defining feature of rmTBI is that the repetitive nature of impacts causes an additive effect, which always leads to amplified negative consequences. This is why rmTBI and sports are closely related. Athletes engaged in contact sports (e.g. American football and boxing) are exposed repeatedly to blows to the head, albeit mild blows. Unaware of the consequences, because after impact almost all athletes appear normal, the individual keeps going to games and practice, while underlying forces keep adding up. Sooner or later, that certain individual will show up in the emergency room or hospital due to cognitive or behavioral problems.

It’s because of the increasing number of traumatic brain injury in sports; more awareness is needed when directing research at establishing results that can help better minimize the risk of future incidences. A highly valid and reliable method used to establish results is done in the laboratory, using animal models that mimic real-life situations, such as brain impact, brain trauma, and head injuries. With these experiments, we can advocate results that better show the nature of TBI, how it works, and what it leads to.

Traumatic brain injury is a spectrum in which the magnitude and degree of symptomatic injury can vary between the type, location, force, and speed of the blow to the head.

During mild TBI, a person may experience symptoms such as headaches, dizziness, vertigo, and lightheadedness [2]. These symptoms may not be life threatening, nevertheless, a concussion warrants a visit to the emergency room in order to get the proper tests and scans done, to ensure that the brain is structurally, hemodynamically, and cognitively intact.

A step up on the spectrum, we get symptoms that are more severe, with a higher chance of causing life threatening circumstances. In these cases, a trauma to the head may result in coma, extended periods of memory loss, difficulty speaking, and behavioral changes. 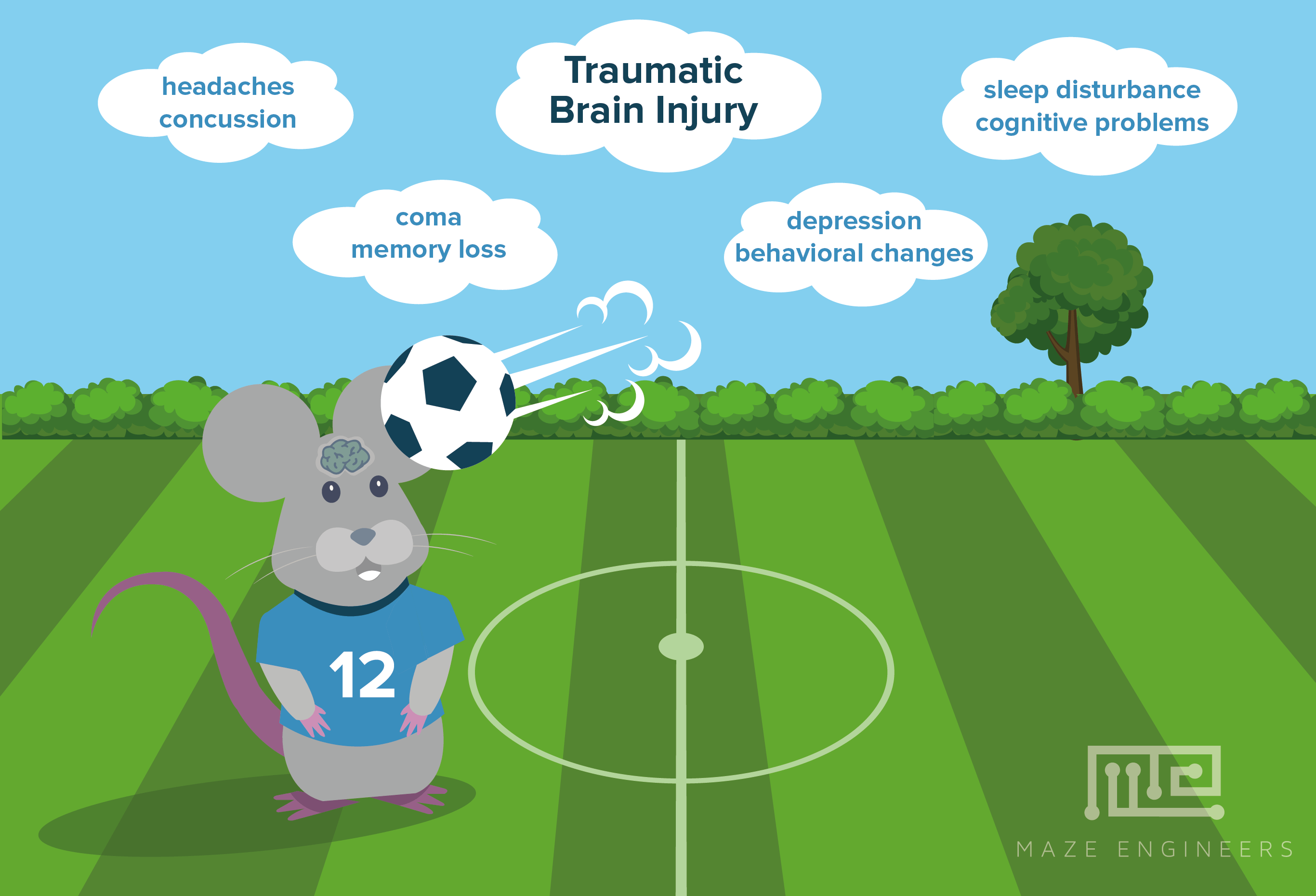 The third type of TBI, the one we are most concerned with, is repetitive mild TBI. Research has shown that this form of TBI can lead to Chronic Traumatic Encephalopathy, CTE, which consists of patches of accumulated proteins in the brain [3]. There is a positive correlation between this type of TBI and CTE. In effect, the symptoms that emerge here range from disruption in cerebral blood flow to white matter damage. The latter accounts for specific disorders, such as depression, sleep disturbances, cognitive problems, and mood swings.

If we look at athletes that are susceptible to head injuries in contact sport such as football, rugby, and hockey, studies have shown that they receive hundreds of brain impacts on a regular basis [1]. What’s even more important is that research shows the inability or difficulty in detecting brain trauma through brain scans, even when disruption or trauma has occurred. This is because most head impacts athletes receive are non-concussive, and brain scans are not sensitive enough to pick up any signs of damage. This is why behavioral assessment should be just as important during pre-clinical trials, but more on that later.

Given the severity of outcomes that can arise from traumatic brain injury in sports, labs need to establish efficient models to better understand the dynamics of TBI’s pathology in sport-related injuries, which would pave the way for a better clinical approach during treatment.

Animal models have been given extensive attention due to their importance in allowing researchers to mimic real life situations. Several methods exist today, but for the sake of our article, we will look at the ones that closely relate to models that best mimic sport related injuries.

When we discuss traumatic brain injury in sports, there are several factors that separate it from other sources of TBI, like car accidents, abuse, and so on.  As a consequence of its unique nature, specific criteria are necessary to account for when setting up the animal model.

The emergence of these models came to be under a unifying goal, which is to replicate human brain-impact in the laboratory. Every single point listed above was studied and documented during real-life sport events, and thus, it necessitates that the same be done in the lab.

Common models of traumatic brain injury in sports include:

Let’s take a closer look at the specifics of each model. 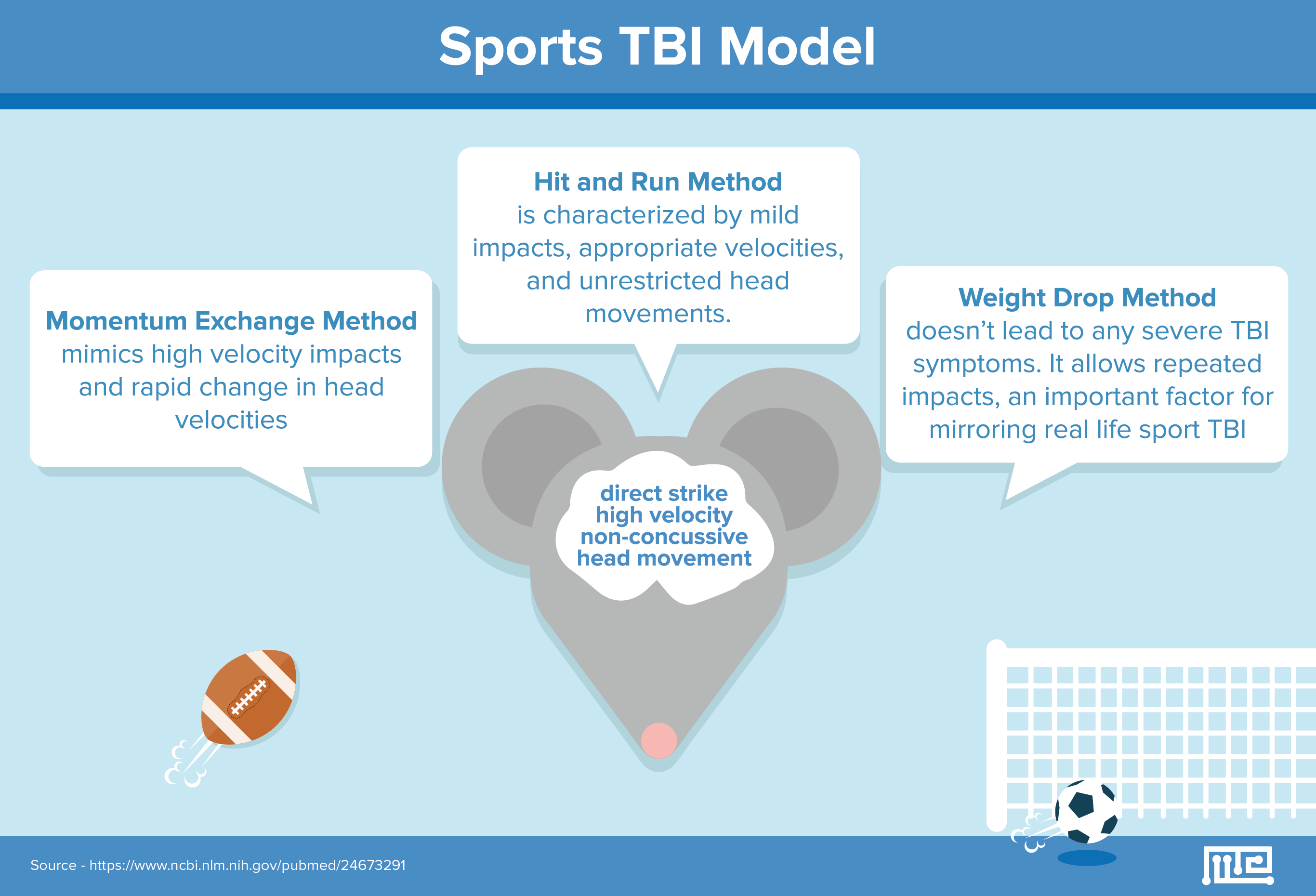 This method was designed with the purpose of mimicking high velocity impacts and rapid change in head velocities [1], which are presented by football players. Ballistic impacts were guided to the lateral sides of the rats’ head, while a padded barrier surrounded the head to act as a helmet. This method was scaled in order to replicate actual human head impacts, leading to concussions. The head of each rodent was not exposed, and upon impact, the head was free to move without restraint.

The importance of this model is illustrated by its tightly controlled environment and its highly reproducible results, and the method overall satisfies the necessary criteria that make an animal model efficient in sports context. Furthermore, the cognitive and behavioral tests that were administered post-experimental impact, heed the notion of parallel results seen within human context, i.e. professional athletes.

A Morris water maze along with a Barnes maze test was used to determine cognitive functioning. The specific aim of these mazes is to determine if the subject has impairment in learning and memory. Typically, both of these mazes require the experimental rodent to perform tasks with the lowest possible number of errors. As researchers established their results and collected their data, the results revealed that post-impact mice took longer to complete the tasks with a higher error rate when compared to the control group. Thus, it was established that memory and learning become impaired after inducing rmTBI.

Similar to its older counterpart, this method was developed as an extension to better resemble sport related rmTBI. Many different sub-types of this method were developed. All followed the criteria in establishing efficient designs to study rmTBI.

The design consisted of dropping a certain amount of weight down a tube onto the head of a mouse, which is situated on a stage. The mouse’s head is unfixed and unrestricted, which allows free movement. The allowed symptoms were presented, while severe outcomes such as skull fractures were avoided. The designs allowed for high velocity impacts, rapid head change, and repeated procedures, all of which draws from real life sport events.

Satisfying the criteria for sport related TBI animal model, the weight drop method doesn’t lead to any severe TBI symptoms. This allows the method to induce repeated impacts, an important factor for mirroring real life sport TBI. Recall that sport injuries to the head mimic that of rmTBI, attributed by repetitive yet not severe impacts to the head over a long period of time. The consequences, as researchers demonstrated, were alarming.

This is an update to the older controlled cortical impact model, CCI; instead of having the impact coming down vertically, the rod was switched to a horizontal position, aiming between the eyes of the rodent.

Now, even though the possibility of repeated impacts was not studied in this design, due to the fear of rodents sustaining severe symptoms, this design, like the ones above, still checks out, making it another possibility to study rmTBI in sports. Mild impacts, appropriate velocities, and unrestricted head movements characterize this animal model of traumatic brain injury in sports. The effects of post-experimental procedures were studied, and the results were similar to those in the methods discussed above.

Establishing a coherent animal model, as we read above, is necessary, but is not sufficient enough to produce the result we need. The goal here is to produce results that can benefit human beings. It’s through behavioral and cognitive assessment that we find overlapping results that can be applied to human athletes. When mice run through the two-weight drop method, for example, it’s experiments such as the Morrison water maze test, Barnes maze test, and 8-arm radial maze that allow information to be transformed from pre-clinical to clinical settings.

By studying mice behavior post-trauma, we are able to get insight as to how well the mice are functioning cognitively and behaviorally. When we set up the 8-arm radial maze experiment, as an example, we can know more about the mouse’s memory load, working memory, and how well the reaction is to the environment, both old and new. By gathering data, we can begin forming patterns, which stems into generalizations.

By following the complex yet rewarding process as the above, treatment of athletes with repetitive mild TBI can be better addressed during clinical settings. Clinicians can extend their knowledge to further investigate whether a person is susceptible to future symptoms of TBI.

Research is still ongoing in the area of traumatic brain injury in sports. Further investigation is needed as the occurrence of incidences reported around the world continue to increase. We took American football as one example, but sports such as boxing, soccer, rugby, and hockey fit in with the information mentioned above. More data on post trauma impact is needed to further bridge the gaps between pre-clinical and clinical settings, ensuring the optimal treatment to be used amongst the human population.