The human response to trauma – even the same kind of trauma – is variable. Even a diagnosis of Post-traumatic Stress Disorder, or PTSD, does not mean that each individual with PTSD will necessarily exhibit all of the same symptoms. While the core symptoms of PTSD are universal (intrusive re-experiencing of the trauma in response to certain triggers), some individuals experience primarily fear-based responses, whereas other individuals might experience anhedonia (lack of pleasure seeking) or dysphoria (overall dissatisfaction and anxiety).

Given this variable expression of PTSD, it is notable that current animal models designed to mimic PTSD phenotypes, concentrate almost exclusively on the fear-based symptoms of the disease (usually by employing a cue-based fear conditioning paradigm). The trouble with relying solely on such a method is that many other expressions and presentations of human PTSD are consequently undetected and unsuccessfully modeled in rodents.

A recent study published in Molecular Psychiatry by Richter-Levin and colleagues attempts to address this issue by proposing the use of a different kind of trauma-inducing task for rodents. Adult male rats were exposed to extreme underwater trauma (UWT) using an already-established anxiety maze: the zero maze (note: the dry land-version of the zero maze is traditionally used as an alternative anxiety test to the Elevated Plus Maze, or EPM). This maze is termed the water associated zero maze, or WAZM. 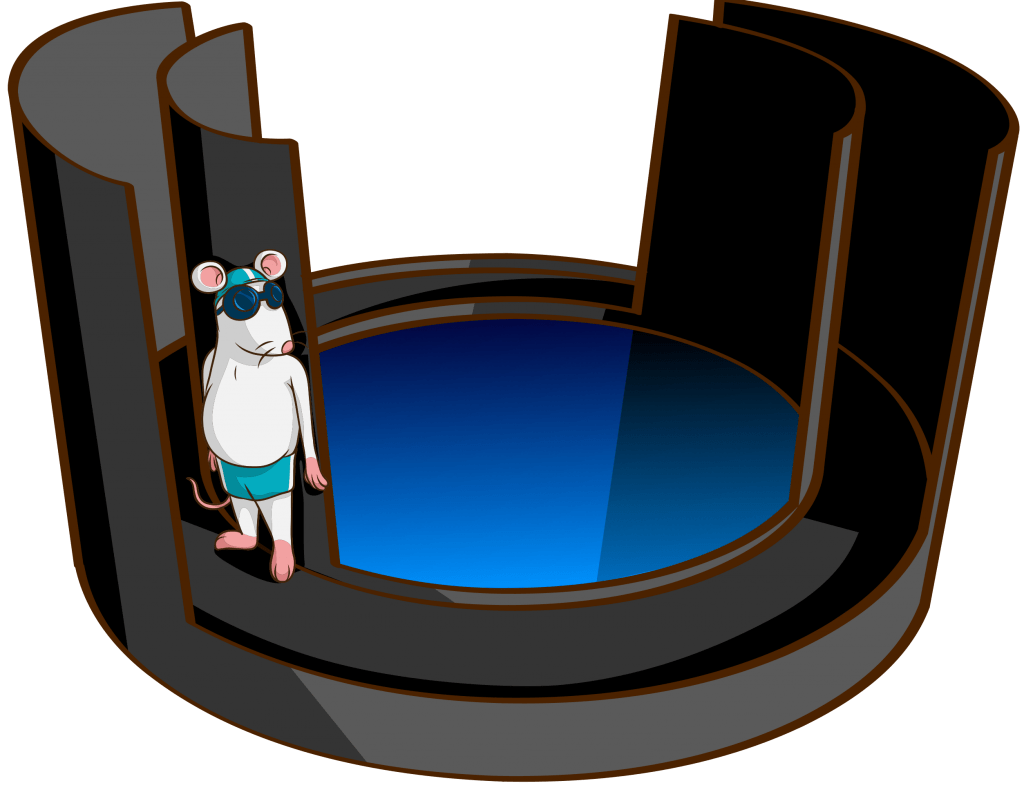 In the water associated zero maze, rodents are first habituated to the room for two minutes and then to the maze for 5 minutes at a time (four total presentations across four days). The 5-minute habituation phase is initiated by placing a rat into one of the open arms, facing a closed part of the apparatus. On the fourth day (immediately after the fourth habituation), rodents are exposed to the underwater trauma (UWT) – submerged under water (22 degree Celsius) for 45 seconds, using a special metal net. After this exposure, the rodents are dried and returned to their home cages. Importantly, this UWT method has been shown by other groups to induce long-lasting anxiety in animals, without causing tissue damage, loss of life or change in body weight (compared to control animals).

Using Water Associated Zero Maze, researchers were able to induce PTSD-like symptoms in rats. Importantly, these induced PTSD-like symptoms were variable and grouped into three main categories: (1) anxious fear-based, (2) fear-anhedonic, and (3) exposed unaffected group. As a note: anhedonia in rodents is typically assessed using the continuous saccharine preference test, in which rodents are given two bottles (one water, one sugar water) and the preference for sugar water over regular water (a measure of pleasure seeking or hedonia) is assessed. Normally, untraumatized animals will demonstrate a preference for saccharine water.

As with any new behavioral protocol, replications are necessary to further validate this as a useful tool for stress research.  Ultimately, however, the Water Associated Zero Maze (WAZM) provides researchers with a new alternative for inducing, and thereby studying, PTSD. Given the variable stress outcomes in this test, the Water Associated Zero Maze is a potentially powerful corollary test to more established fear-based tests of PTSD which may leave some facets of PTSD otherwise undetected.