Since we’re talking about running tests on mice the method of choice used in these studies is, you guessed it, mazes. The study we’ll be focusing on today concerns a maze called the zero maze, but before we get into that let’s explain the methodology.

Non-conditioned studies do not involve learning responses and can be said to be more “realistic”. An example of this is the light-dark paradigm, which is built around rat’s’ natural aversion to brightly lit areas.

Now for the zero maze: this funhouse of science is built with a circular design and consists of four sections that are both walled and unwalled. As well as examining the neurological and psychological basis of anxiety, researchers must also take into account the mazes’ environmental factors, especially since this maze is built around animals’ fears of open spaces and heights (spending time more time in open spaces means less anxiety, according to most research).

In the current study, Heredia, Torrente, Colomina, and Domingo (2013) decided to examine the most common and studied strain of anxiety, C57BL/6J, in a pharmacological context, and the reliability of the measures used in doing so.

To do this, they exposed healthy male mice to three drugs: chlordiazepoxide (CLZ), a drug that inhibits anxiety (a bravery drug); picrotoxine, a drug that promotes anxiety (a little like the fear gas in Batman); and methylphenidate, a stimulant. A control group was given a saline solution. 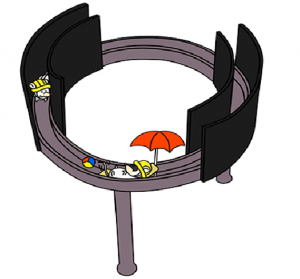 The results show that mice given 10 mg/kg CLZ in experiment 1 spent less time in open space compared to the control group, and were also less active than in the control group (i.e., they groomed themselves and stood on their hind legs more often) and exhibited a lower distance ratio. However, when given 2.5 kg/mg in experiment 2, they spent more time in the open area and exhibited more activity.

In experiment 1, mice given 0.5 kg/mg of PTX showed an increased latency to entering the first open area, spent less time there. They were also less active but revealed no other significant differences compared to the control group, even at 1 mg/kg. When given a higher dose (2 kg/mg) in experiment 2, they also displayed a lower movement ratio than for the control group.

The MPH group in experiment 1 (5 kg/mg) also revealed a reduction in time spent in the open space and entering, as well as other activities (head dips, movement time and ratio). Analysis revealed no significant difference between this group and the control, and this also applied in experiment 2.

In conclusion, there’s still a ways to go in understanding how anxiety works in the context of mazes. Even though there’s been extensive research on the C57BL/6J strain, it’s still difficult to say how much of anxiety is influenced by environmental, drug-based or other factors, especially in the context of mazes. To really shed more light on this influence, researchers will need to examine other strains, as well as other types of mazes.