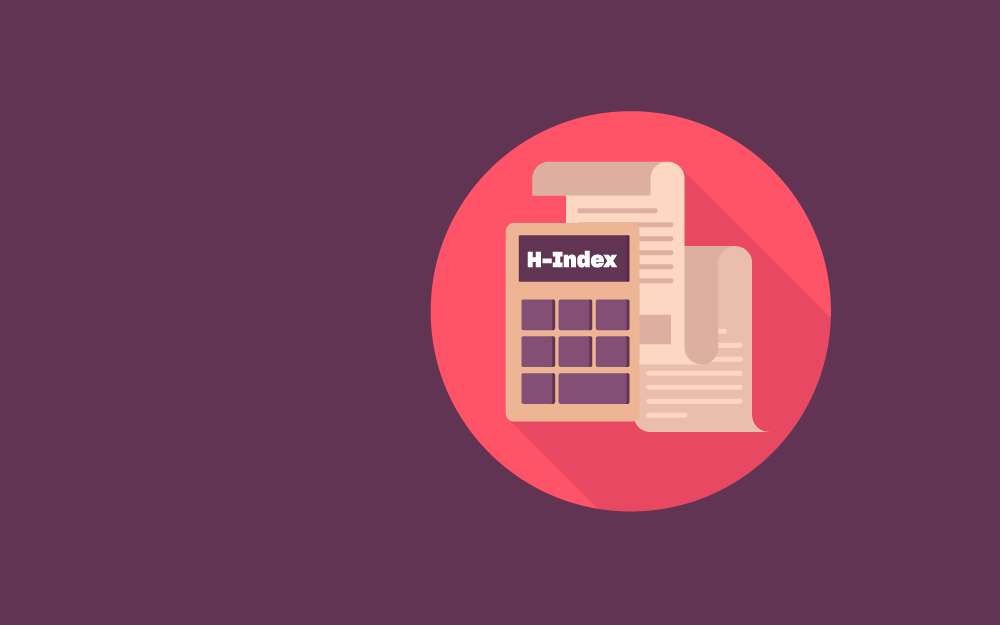 What Are H-index Scores?

H-index scores are popular metrics used to assess scientific performance. They can indicate both the quantity and quality of a scientist’s work, based on the number of publications they have published and their citation rates. The larger the number of cited papers a researcher has, the higher the h-index they get. H-index scores are also employed by funding bodies and employers to determine funding and career decisions.

Note that bibliometrics and scientometrics, such as the h-index, impact factor, and eigenfactor, are increasing in popularity to assess the impact a scientist, an organization, or a journal has within research settings, as well as the dissemination of knowledge and innovations. Given the abundance of research projects and academic publications across the globe, transparent statistical methods are becoming essential tools to reveal scientific success, productivity, and impact.

How to Calculate H-indexes?

Platforms, such as Scopus and Web of Science, can compute h-index scores automatically. At the same time, h-index scores can be calculated manually. To do that, one should organize a researcher’s articles in a descending order (highest to lowest), based on the citation rates for each publication. Note that databases, such as Google Scholar and PsychINFO, can be used to extract citation information and facilitate calculations (“How do I calculate my h-index?”).

The h-index is based on the last position in which the rank of publications is greater or equal to the number of citations. For example, if a researcher has five published papers (A, B, C, D, E) with 20 citations for paper A, 15 for B, seven for C, four for D, and one for E, their h-index will be four because their fourth publication (D) has four citations (or the rank of the paper is equal to the number of citations). In this scenario, h-index=4 means that the author has four citations that have been cited at least once.

The History of H-index

H-index scores have a relatively short but intense history. The h-index, known as the Hirsch index, was introduced by physicist Jorge Hirsch in 2005 to measure both productivity and impact of individual scientists. Hirsch stated, “I propose the index h, defined as the number of papers with citation number ≥h, as a useful index to characterize the scientific output of a researcher” (Hirsch, 2005). This bibliometric measure has been quickly adopted by institutions as its calculation is pretty simple and can even have predictive power for a researcher’s future success. Hirsch claims that after 20 years of research, an h-index=20 is good, 30 is outstanding, and 40 exceptional.

Interestingly, the h-index can be used beyond theoretical physics – it can be applied to authors, institutions, and journals as an indicator of scientific achievements. However, factors, such as academic experience, fields of work, and average citation rates, should be considered to provide objectivity and transparency.

The h-index is a powerful academic footprint, which reveals numerous advantages when compared to other metrics. One of the benefits of h-index scores is that they reveal a researcher’s productivity and impact, as well as how citations are distributed over a set of articles. Note that as single highly cited articles do not influence h-index scores, h-index values encourage impactful research and high performance. The h-index can be easily calculated and used to compare scientists with similar academic experience, in similar research fields, and within similar journal categories (“Calculate your academic footprint: Your h-index, 2019”).

However, the h-index has its cons. H-index values are time-dependent measures proportional to the academic “age” of a researcher (e.g., senior authors would have had more time to publish their work and receive more citations). They are also prone to bias and mass self-citation. Another limitation is that the h-index does not account for the number of authors on a publication; for example, a researcher who is the author of a highly-cited paper would get the same credit as a researcher who is on a similar paper with ten other co-authors. The h-index can’t be used to compare authors across different research disciplines either; note that in some disciplines, research output is books and conferences, which are not well presented by online databases. Moreover, online resources that calculate h-index scores give different values as each database has different coverage of publications and citations, with review articles being cited more frequently than original papers (Oswald).

H-index scores are vital indicators to measure a researcher’s footprint in research. As h-index scores are widely used in academic settings – with a high impact on job applications and funding decisions – many researchers focus on their h-index and ways to improve it. However, there are some unacceptable techniques to increase academic metrics, which can lead to ostracism and even legal issues:

To increase an h-index ethically, on the other hand, a researcher should consider the following techniques:

Ratio-based indicators and network-based indicators are also essential. Impact factors are perhaps the most popular ratio-based indicators used to measure the importance of a journal. They are defined as the frequency with which a particular article from a scientific journal has been cited within the past few years. For example, if a paper has a large number of citations, the journal that has published the paper is more likely to be highly ranked. Impact per publication is another popular indicator, which is assessed over a three-year window and based on papers that are clearly defined as articles, reviews, and conference publications.

Network-based indicators, on the other hand, are used to reveal the importance of a journal in a whole citation network; popular network-based metrics include eigenfactors, SCImago journal ranks, and relative citation ratios.

Even though h-index scores are used mainly across academic environments, it’s interesting to mention that h-indexes have also been implemented in the evaluation of a person’s contribution to Internet media. For instance, the h-index can be adapted and applied to YouTube video creators. In combination with index g, h-index scores can capture one’s productivity and impact based on the number of videos and view counts (Hovden, 2013)..

Note that Web 2.0 technologies and sharing platforms, such as YouTube, have become popular tools in knowledge translation. YouTube can be used to spread audio and visual material related to scientific topics and innovations, even among non-experts.

The h-index is a powerful portfolio-based indicator used to show how productive and influential a scientist is in his or her field of work. In simple words, researchers with a wide range of papers with high levels of citations receive good h-index scores. H-index scores are used for evaluating job and grant applicants and can help even non-experts catch a glimpse of a researcher’s success.

At the same time, metrics are often prone to bias. H-indexes can be influenced by inappropriate methods, such as mass self-citation and plagiarism. Moreover, experts claim that metrics are slowly creating a research culture where numbers replace quality content, innovation, and personal skills. To provide an example, h-indexes between three and five are common for new assistant professors, scores between eight and 12 are enough for a promotion to tenured associate professor, and h-index values between 15 and 20 are satisfactory for becoming a full professor. Yet, some full professors and deans have relatively low h-index scores, while exceptional researchers with scores over 10 might still be working on a post-doctorate project. In the end, although h-indexes provide transparency and make sense of the abundance of scientific projects and publications across the world, h-indexes are just rough metrics. As Hirsch said himself, “Obviously a single number can never give more than a rough approximation to an individual’s multifaceted profile, and many other factors should be considered in combination to evaluate an individual. This and the fact that there can always be exceptions to rules should be kept in mind, especially in a life-changing decision such as the granting or denying of tenure” (Oswald). In other words, while researchers should focus on their h-index scores and ways to improve them, people should not forget that factors, such as personal attitude, motivation, teaching projects, and real-life efforts, matter the most.