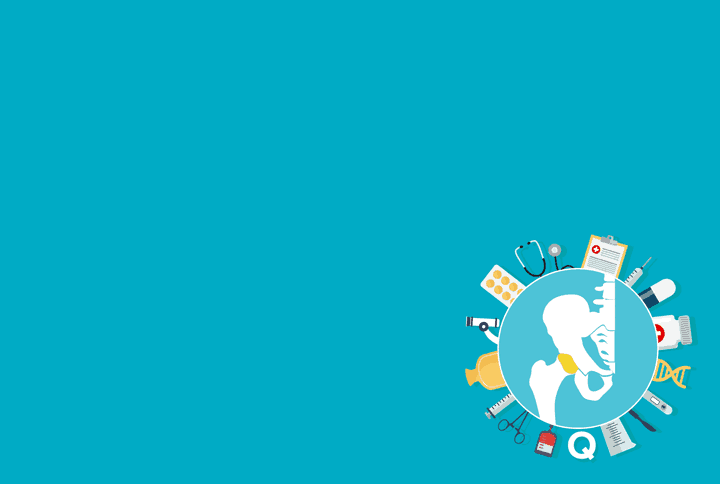 The International Hop Outcome Tool (iHOT 33 & 12) module is a Qolty Survey for use in patients with hip problems. It consists of 33 items in the original long form as well as the 12 question short form. It is delivered as both a computer adaptive test as well as an electronic survey. The Four key domains include functional limitations, symptoms, sports/recreational activities, and quality of life regarding job/social/emotional/lifestyle concerns. Available in multiple languages.

The International Hip Outcome Tool (iHOT) was developed and introduced by Mohtadi et al. 2012. The iHot-33 version consisted of 33 items. Later, a 12 item questionnaire was developed by Griffin et al. 2012 known as the iHot-12. These tools were developed to assess and measure the patient’s ability to perform the daily activities of life after undergoing hip problems. This tool is a determinant in measuring the psychological, social and pathological aspects of patients affected by hip issues.

The questionnaire evaluates the state of the patients with hip problems that ranged from mild fractures to serious arthroplasty complications. The sustained iHOT tool was created to include a diversified range of patients ranging in ages from 18-60 years (Griffin et al. 2012). It is a self-administrative tool in the form of 12 questions that aimed to measure hip and muscle issues. The questionnaire pinpoints and characterizes the root cause or the area of difficulty in the lower abdominal and back areas connected with the hip joints directly.

The need for a shorter questionnaire tool was felt by physicians to save time. Therefore, the iHOT-12 was introduced as a shorter version of the iHOT-33 administered test. This patient reported outcome (PRO) tool is used to evaluate the effectivity of the performance of the patients before, after and during the surgical procedures.Methods

The testing of the iHOT-12 version was performed on a sample of 104 patients, while the responses of 80 people were marked on both the versions and were compared. The 12 pointer questionnaire for iHOT-12 concentrated on all the marked and defined areas of the critical iHOT-33 version, dealing with assessment areas of the daily routine activities that included coordination, mobility (both in terms of ease and difficulty of movement, especially triggered by hip movements), gait, the restrictions on mobility caused by the hip problems, the intensity of pain, and the ease and difficulty of sitting posture.

The iHOT-12 contains 12 questions, covering four domains: symptoms and functional limitations, sports and recreational activities, job-related concerns and social, emotional and lifestyle concerns. This questionnaire was developed for young-to-middle-aged active people with hip disorders. Each question is answered on a visual analog scale, and a total score is calculated, ranging from 0 (worst QOL) to 100 (best QOL). This questionnaire focuses on asking the patients about the pain and related symptoms of discomfort, and the difficulty afflicted by changing postures.

The questionnaire also determines the extent of difficulty in carrying weight or applying force to something, which also includes the pressure applied to the abdominal area during sexual intercourse. The questionnaire also documents the mental and psychological stress faced because of the hindrance in the daily activities. As a whole, it evaluates the changes brought into patient’s quality of life after undergoing hip problems.

Although iHOT 12 is a limited tool that measures only the lower abdominal region and hip problems, the advantage of the tool surpasses this limitation as it serves as a specialized tool to meet the needs of the patients who are undergoing hip problems. This tool is one of the latest advances in hip issues and is in exceedingly higher demand. The tool has been tested on samples and has shown outstanding results that have let medical practitioners discover further problems and areas.Comparisons

The iHot tool is one of the most advanced versions of the hip outcome specific tools; the iHOT-12 is the short version of the original analysis tool iHOT-33 version. After the success of the iHOT-33, a shorter version of iHOT-12 was created to measure the same performance levels and areas as measured by the detailed version of the iHOT. The iHOT-33 compromises of 33 questions, whereas the iHOT-12 consists of 12 questions.

The iHOT-33 was a successful tool for measuring the outcomes of the patients who had experienced pre- and post-hip surgeries. The iHOT-33 was initially tested in the year 2012-2014 on a sample of 97 patients who were in the process of receiving a hip arthroscopy intervention.

The iHOT-33 is an effective, reliable and a trusted tool to help guide the clinicians to assess the patient recovery. It is a proved tool to be used in the medical practice (Miguel Angel Ruiz-Ibán, 2015). The iHot-33 encompasses the same four domains as that of the iHot-12.Translations

The tool has been successfully translated and validated into German (Baumann et al. 2016), Swedish (Jónasson et al. 2014), and Dutch (Stevens et al. 2015), where the results have been identified to be the same.A sample data can be visualized by comparing the mean score of the questionnaire during pre- and post-operative states. It is evident from the graph that the patient’s score in all four domains is increased during the post-operative state. Figure 1 This validates the efficiency of the iHot-12 tool in demonstrating the probable effects of the intervention employed for improving the patient’s quality of life.Another sample data can be visualized by comparing the test-retest reliability of the iHot-12 tool with its successful translations, i.e., iHot-12-S, iHot-12-G, and iHot-12-NL. The test-retest reliability is quantified by the means ICC score.

The iHOT-12 version has been identified to cover the same domains and aspects of the iHOT-33 version. Both outcome tools have delivered the same results as of measuring similar areas of the patient’s hip and abdominal areas. Therefore, iHOT-12 is a reliable, valid and fair version. For further evidence of its validity, the short version tool has been translated and validated in different languages as well. Although the iHOT-12 version is one-third of the iHOT-33 version, it shares a relevancy of 95% with the original detailed version of the iHOT-33. The results have been proved to be similar, and there are no marked differences in the results calculated.

The iHot-12 tool shows favorable results with the validity, reliability and the responsiveness parameters. However, it lacks in some aspects and areas of concern, the first being the minimal important change (MIC). For iHot-12, MIC cannot be measured accurately, but can only be estimated due to the lack of the therapeutic gold standard. Martinez et al. 2014 discussed the short-term outcomes of patients with hip arthroscopy in detail, but they also did not discuss the minimal important change. Furthermore, there is a need for prospective studies that probe the longitudinal measurement properties of the iHot-12 tool.Summary and Key Points