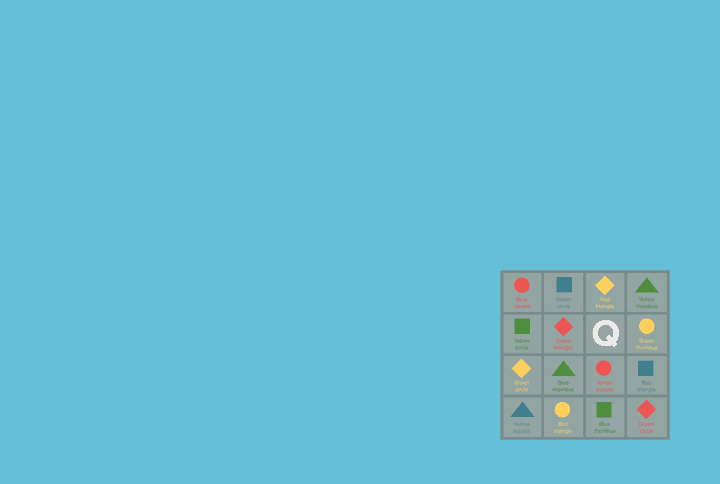 The stroop test is a widely used and cited neuropsychometric test examining word-conflict color. Words are given dependently and independently of the color of the ink on the screen in the Qolty Stroop module. Color and name variations can be linked or randomized, with combinations entered as default or with your own custom variations possible.  Timing of completion of the test (recording of answers) can be given with audio with post hoc scoring for later laboratory analysis.The Qolty Mobile Assessments utilizes the Apple ResearchKit™ framework  to define a large number of predefined tasks in six broad categories: motor activities, fitness, cognition, voice, audio, and hand dexterity. We utilize these functions for your use in your study, making it easy to capture objectively reported data from your patients.

This phenomenon was first described in detail in a thesis by J.R. Stroop in 1935. Stroop effect is one of the rare examples of psychological phenomenon which continues to gain interest and new applications even after such a long period since its initial recognition (MacLeod, 1991). In fact, the advent of computers has only added to the utility of this effect, as it is easily automated, and computer-based tests are more accessible and more straightforward to implement.

People learn to read at very early age, and soon the process becomes automated, that does not require much conscious effort, thinking or attention. But other smaller things tend to demand more mental resources. Thus when suddenly the person is asked to name the color of the word, instead of reading it, it requires intellectual working, which takes longer than reading.In the example below a person is asked to read each word in column 1 and 2 aloud (Fig 1), ignoring the color of the text. While in column 3 and 4, the subject has to name the color of each word, ignoring the word itself (MacLeod, 2016).

Time for reading each column from start to finish is monitored. Most people would take more time in reading aloud column 4 as compared to column 1. In case of dementia, the difference would be more significant as compared to a healthy population group.

Above is just one example, though Stroop effect may be adapted for various needs. However underlying working principle remains the same. One such example of adaptation is for measuring emotional bias in a person. Research has shown that a person with the specific affective disorder would be slow in reading the relevant words like “Grief,” “Pain” (Williams et al., 1996).

You’re changing the way health research is done.Stroop effect has many practical applications; it can be used to assess the level of attention deficit, mental functionality in a person. Thus it can be used to monitor the cognitive abilities of a person suffering from various psychiatric diseases like schizophrenia, bipolar disorder, or major depression. It can have particular value in assessing attention and mental processing speed in neurodegenerative diseases like dementia, Alzheimer’s, or even age-related decline of mental capabilities. Compromised attention and mental abilities are not only found in neuro or psychiatric disorders. Thus usage of Stroop effect may help to understand the mental skills in various other somatic disease conditions.

With easy adaptability on various platforms and conditions, applications of Stroop effect is virtually limited by only imagination.A wide range of versions of TMT, with great psychometric properties, has been created. As mentioned above, the Connections version is one of the most popular forms used in research (Salthouse, 2011).

It is easily adapted to automated platforms like Qolty, which means the results of the test are more precise, easy to analyze and compare.

There are very few limitations of Stroop effect even if it is applied with proper planning and using right kind of platform like Qolty. It requires a certain degree of literacy, and may not be fit for very young children and infants (Ramirez-Benitez & Bringas, 2011). Further, depending on the design of studies, gender bias should be kept in mind as women are usually better at verbal and fine motor tasks and men have the greater spatial ability (Mekarski et al., 1996).