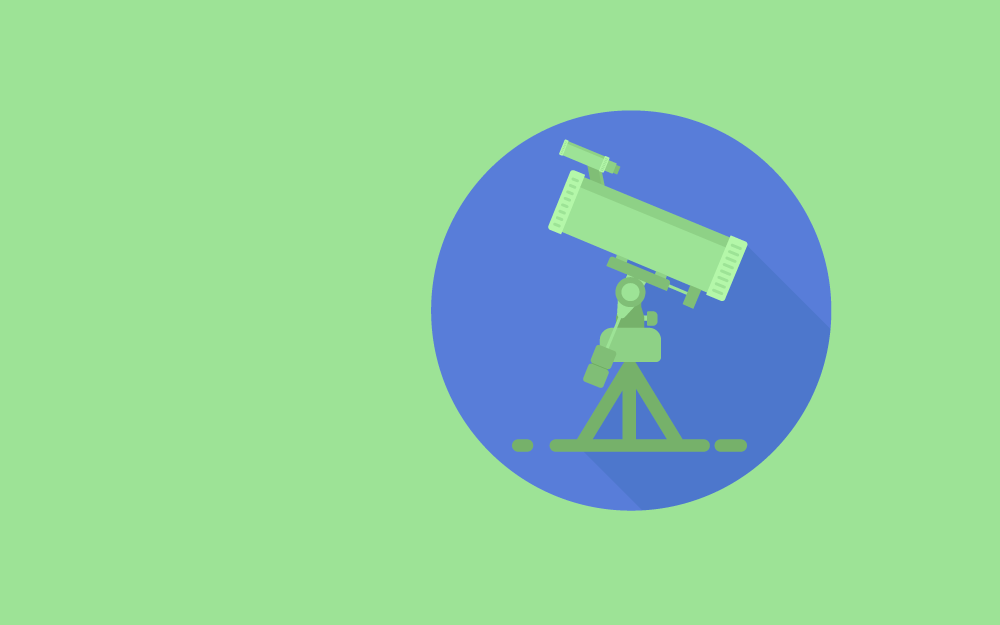 Reflecting Telescopes: All You Need to Know

The history of telescopes is fascinating. The first telescope was invented in the 17th century. Note that it was spectacle-maker Hans Lippershey, who was credited as the inventor of the first refractor telescope, and Galileo Galilei, who pointed the telescope towards the skies. Early refractor telescopes, however, suffered from chromatic aberration, so in 1668 Sir Isaac Newton replaced the primary lens with a mirror, solving the problem of chromatic aberration and creating the so-called Newtonian reflecting telescope. Half a century later, John Hadley improved the design of reflecting telescopes and started using parabolic mirrors that displayed little spherical aberration or distortion.

Now reflecting telescopes are highly popular among amateur astronomers and nature lovers. Optics industry leaders, such as Celestron, Orion, and Meade, manufacture excellent units suitable for both terrestrial and astronomical use and offer users the unique opportunity to explore the mysteries of the universe. Additionally, powerful and computerized telescopes with advanced optics and large mechanical structures enhance the study of distant celestial objects, such as nebulae, novae, and asteroids, by their emission or reflection of electromagnetic radiation (e.g., radio, infrared, and gamma-ray units)

Additionally, there are three major aspects buyers should consider before purchasing a reflecting unit:

Requirements: One of the main factors that should determine purchasing choices is user requirements: users should decide what objects they want to see (e.g., deep-sky or bright objects) and where they’ll be viewing them (e.g., light-polluted areas or rural regions).

Reflecting telescopes, in particular, are ideal for both astronomical and terrestrial use. As explained above, reflectors employ mirrors instead of lenses to focus light onto a focal point. As wavelengths reflect off the mirrors in the same way, reflecting telescopes do not suffer from optical problems, such as chromatic aberration. Note that a secondary mirror can be employed to focus the light onto the eyepiece, which is often positioned near the front of the tube. Reflectors are ideal for viewing deep-sky objects such as nebulae and galaxies, as well as observing bright celestial objects like planets.

Specifications: Aperture, magnification, and focal length are all factors to consider when buying a reflecting telescope. Note that aperture is defined as the diameter of the telescope’s main optical part (lenses or mirrors) through which light passes. A bigger aperture is ideal for viewing deep-sky objects (e.g., galaxies, nebulae, clusters).

Total cost: Before purchasing a reflecting telescope, users should decide on a budget. Aperture, optical quality, and materials used are all essential factors to consider. As mentioned above, the bigger the aperture, the better the image is; telescopes should have an aperture above three inches to be considered usable items. Units with big aperture (above 150 mm) can provide magnificent views of deep-sky objects, such as galaxies, star clusters, and nebulae, while an aperture of 60-80 mm will be enough for viewing bright images, such as the Moon – one of the easiest and most fascinating objects to explore.

Additional features, such as support systems, mounts, focusers, finderscopes, camera adapters, and bags, should also be considered. Note that computerized telescopes can be more costly but more suitable for beginners with little knowledge of the night sky because such units can facilitate celestial alignment, tracking, and observation.

Whether it’s for studying the mysteries of the universe or stargazing with your loved ones, telescopes are worth investing in. Reflecting telescopes, in particular, are preferred tools by many as they are simple to assemble and use. Reflectors also come with a bigger aperture, which makes them ideal for observing deep-sky objects. Based on different characteristics and user reviews, here’s a list of the best reflecting telescopes on the market:

Orion 10134 SkyQuest XT8g Computerized GoTo Dobsonian Telescope is one of the most powerful reflecting telescopes (with an aperture of 203 mm) that can help users conquer the mysteries of the skies. Some of the extra features the unit comes equipped with are a two-inch dual-speed (11:1) Crayford focuser and a fully motorized object location. Note that for fully motorized operations, users should buy 12V power supply, which is sold separately. Orion 10134 skyQuest XT8g Computerized GoTo Dobsonian Telescope also comes with pre-installed GoTo motors and gears, so assembling is pretty straightforward, allowing users to enjoy the beauty of more than 42,000 objects in the skies.

Orion 09007 SpaceProbe 130ST Equatorial Reflector Telescope is a wonderful tool for both beginners and experts. It has a 130 mm parabolic mirror and two 25 mm and 10 mm Sirius Plossl eyepieces. The unit is equipped with an EQ-2 equatorial mount with slow-motion hand controls and a stable tripod with an accessory tray. Moreover, Orion 09007 SpaceProbe 130ST Equatorial Reflector Telescope is light and easy to take out to different stargazing locations.

Celestron 31045 AstroMaster 130EQ Reflector Telescope is a powerful unit that comes with a German equatorial mount, an adjustable steel tripod, two eyepieces (20 mm and 10 mm), and a StarPointer red-dot finderscope. The aperture of the unit is 130 mm, allowing the viewing of both bright and deep-sky celestial objects. Additionally, Celestron 31045 AstroMaster 130EQ Reflector Telescope comes with Starry Night astronomy software with a rich 10,000 celestial objects database, printable maps, and enhanced images.

Celestron 21045 PowerSeeker 114EQ Reflector Telescope is one of the most suitable tools for beginners; the telescope is easy to use and powerful at the same time. The unit comes with two eyepieces (20 mm and 4 mm), a 3X Barlow lens, and a finderscope. Additionally, this Newtonian telescope is equipped with a German equatorial mount with a slow-motion altitude rod to facilitate alignment and viewing. Celestron 21045 PowerSeeker 114EQ Reflector Telescope is simply ideal for navigating the night sky.

Meade Instruments 216006 Polaris 130 EQ Reflector Telescope is a powerful tool equipped with a rack-and-pinion focuser, low (26 mm), medium (9 mm), and high (6.3mm) 1.25-inch magnification eyepieces, and a 2X Barlow lens. Note that the unit has a focal length of 650 mm and a focal ratio of f/5.0. It comes with a German equatorial mount, a steel tripod with a tray, and a red-dot viewfinder, as well as a bonus astronomical software. With a variety of features, Meade Instruments 216006 Polaris 130 EQ Reflector Telescope is suitable for both experts and amateurs.

Orion 10016 StarBlast 6 Astro Reflector Telescope is a versatile product with an aperture of 150 mm and a magnification of 300X. Its compact tabletop design makes it a great portable telescope with a total weight of 10.7 kg (23.5 lbs). Furthermore, the unit is equipped with two 1.25-inch eyepieces (25 mm and 10 mm), an EZ Finder II aiming device, as well as Starry Night software. Orion 10016 StarBlast 6 Astro Reflector Telescope can reveal the secrets of the night sky to both beginners and seasoned users.

Celestron 21023 Cometron FirstScope Telescope is a portable Dobsonian-style telescope. Note that its spherical mirror provides 76 mm of aperture and sharp views, ideal for viewing both bright celestial objects and deep-sky objects. The unit includes two Kellner eyepieces and a 5×24 finderscope. With its appealing design, Celestron 21023 Cometron FirstScope Telescope is not only a great reflector unit but a beautiful decorative fixture on your bookshelf.

Meade Instruments LightBridge Mini 82 Tabletop Telescope is another portable Dobsonian unit, which is ideal for stargazing and outdoor adventures. This model features an 82 mm aperture, a Dobsonian mount, two eyepieces (9 mm and 26 mm), a 2X Barlow lens, and a red-dot finder. Meade Instruments LightBridge Mini 82 Tabletop Telescope also comes with a software DVD, which makes it ideal for beginners and astronomy lovers.

Orion SpaceProbe II 76 mm Altazimuth Reflector Telescope is an affordable telescope kit with a variety of features. The unit includes a stable altazimuth mount, a tripod, 25 mm and 10 mm Kellner eyepieces (28X and 70X magnification rates, respectively), a red-dot reflex sight, a 1.25-inch focuser. Note that this telescope has a 76 mm aperture, which is large enough for wonderful views of the Moon, the rings of Saturn, the moons orbiting Jupiter, and some bright nebulae. Last but not least, Orion SpaceProbe II 76 mm Altazimuth Reflector Telescopes come with useful MoonMap 260 to help users dive into the secrets of the skies.

From Newtonian models to Dobsonian tools, there’s a wide variety of reflecting telescopes on the market. Reflectors are highly popular as they are simple to assemble and use. As reflecting models use mirrors instead of lenses, they do not suffer from optical problems such as chromatic aberration, which makes them preferred tools by astronomy lovers.

Here we should mention that Cassegrain telescopes are a type of reflecting telescopes that use a combination of a concave and a convex mirror to elongate the focal length of the system. In fact, there are two types of Cassegrain units: symmetrical and asymmetrical telescopes. Cassegrain systems are also used in sophisticated catadioptric systems, including the Schmidt-Cassegrain, Maksutov-Cassegrain, and Klevtsov-Cassegrain, which are ideal for professional and seasoned users.

Taking Care of a Reflecting Telescope

As stated earlier, Celestron, Meade, Orion, Tasco, Bushnell, iOptron, and Vixen are among the most top-notch companies on the market.

That being said, taking care of telescopes is essential to ensure accurate and long use:

Telescopes are fascinating inventions that facilitate the study of scenery, animals, and celestial objects. Reflecting telescopes, in particular, are popular units that provide enlarged images of objects and structures. Note that the first reflecting telescope was invented in 1668 by Sir Isaac Newton, who replaced the primary lens of the refractor system with a mirror. Half a century later, John Hadley added a parabolic mirror to eliminate possible distortions. Today’s reflecting telescopes do not suffer from problems such as chromatic aberration and can be made quite big, which makes them ideal for viewing dim celestial objects.

Choosing and taking care of a telescope, however, can be challenging. Users should consider three main factors: requirements, specifications, and total costs. Aperture, magnification, and focal length are all essential characteristics. Note that a high aperture is ideal for observing deep-sky objects, such as nebulae and galaxies. Additional accessories, such as focusers, carry bags, and celestial maps, are also essential to facilitate satisfactory viewing of the night sky.