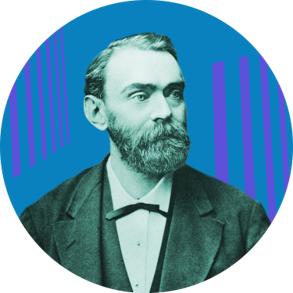 Alfred Nobel is considered by some an inventor rather than a scientist but through the mid, to late 1800s these professions are somewhat synonymous. Most famous now for the Nobel Prize that is awarded to benefactors of humanity originally in the areas of physics, chemistry, medicine, literature, and peace. However, Alfred Nobel’s discoveries do not reflect that of peace. Nobel worked a lot with the newly discovered Nitroglycerine, an explosive far more powerful than the standard black powder used at the time. The problem with this explosive is that it was incredibly volatile and so Nobel created Dynamite, even if it was by accident, and blasting gelatin, using Nitroglycerine as the base ingredient.

His intentions of giving more powerful weapons to the state were good however, he believed that it would hasten the end of conflicts with less destruction. In his later years, however, he realized that his inventions were being used for the murder of thousands of people and he attained immeasurable guilt over this fact. This is when he created the Nobel prize, where his wealth attained from the horrors of war was to be used to promote peace and the advance of humanity’s knowledge.