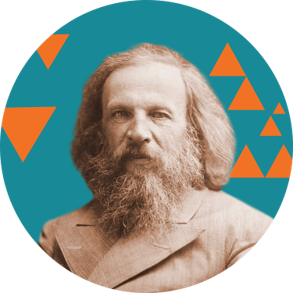 Dmitri Mendeleev is the founding father of our understanding of both chemistry and physics when it comes to the elements. Famous for creating the periodic table of elements that we know today, he was one in many trying to find a way to correctly order the elements. By ordering the chemical elements from their simplest (hydrogen) to their most complex. In 1869 when he first published this however there were only 60 known elements to mankind, now this has nearly doubled and we exhibit 118 elements on the periodic table, using the same classification system. This is incredibly important as it allows chemists and physicists to predict how certain elements will behave either by themselves or with other elements, crucial in all kinds of experiments.

Mendeleev also conducted other less well-known research outside of this field including biology. He published his book ‘Organic Chemistry’ where he details carbon compounds are present in all living things and that chemistry and physics need a structural explanation. This set him on his path and showed the world that Russian Scientists also had their part to play.