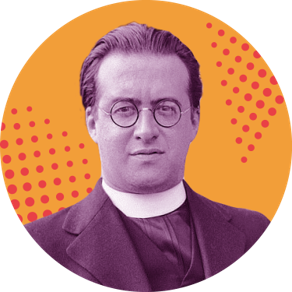 Georges Lemaître was a catholic abbot in a church and also the scientist that discovered the theory of the big bang, if there was ever a fine example of religion and science coexisting, it was this. Working in two somewhat opposite fields Georges Lemaître started his research on redshift, a phenomenon exhibited when deep space objects are moving away from the observer at speed and the light shifts into the red spectrum. From this, he theorized that the universe was expanding, something that Albert Einstein even refused to believe but later in life agreed with Lemaître.

Lemaître took this further however publishing his ‘Hypothesis of the Primitive Atom’, or what will become known as ‘The Big Bang’. He suggested that since the universe is expanding if traced back and back and back surely, we would end into a single point… a primitive atom that exploded into the creation of our universe. This was a revolutionary idea at the time not least accepted by scientists and religious folk alike, now however this is the standard accepted theory of the beginning of our universe.