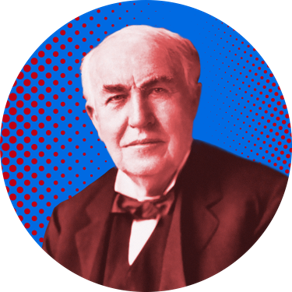 Thomas Edison is often hailed as one of the fathers of electricity and devoted his life to advocating the use of direct current. Locked in a lifelong battle with Nikola Tesla referred to as the “war of the currents”, predominantly our power is delivered via alternating current though Edison’s inventions and use of direct current are still very much in use today. Edison took the first photograph, improved the design of electric lights, and created the first version of motion pictures and even the battery. It is safe to say without this pioneering engineer our lives would be very different today. Based in America he was an inventor, experimenter, and businessman changing the way in which the common man interacts with the world.