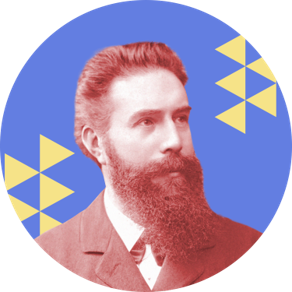 Wilhelm Röntgen is most well known for his discovery of Röntgen Rays, or what we call today… X-rays. This has been heralded as one of the greatest discoveries of the 20th century due to its benefits and applications all over the world. From hospitals to airports, x-rays are an incredibly useful tool and have revolutionized the medical industry. He was awarded a Nobel Prize for this remarkable discovery in 1901 and the first X-Ray ever taken was of his wife’s hand. He started his career investigating the specific heat constants for different gases, this work earned him some renown among scientists and landed him hist lecturing position at the University of Strasburg  It’s his later research on polarized light and magnetism and then cathode rays that led to his discovery of X-Rays however and a place in the history books.