Among the many variables that Simian labs can change in virtual reality, the user, who the user interacts with, how the user sees themselves, can be changed. Virtual reality is an immersive experience. Immerse them in change and isolate the variable you would like to study. 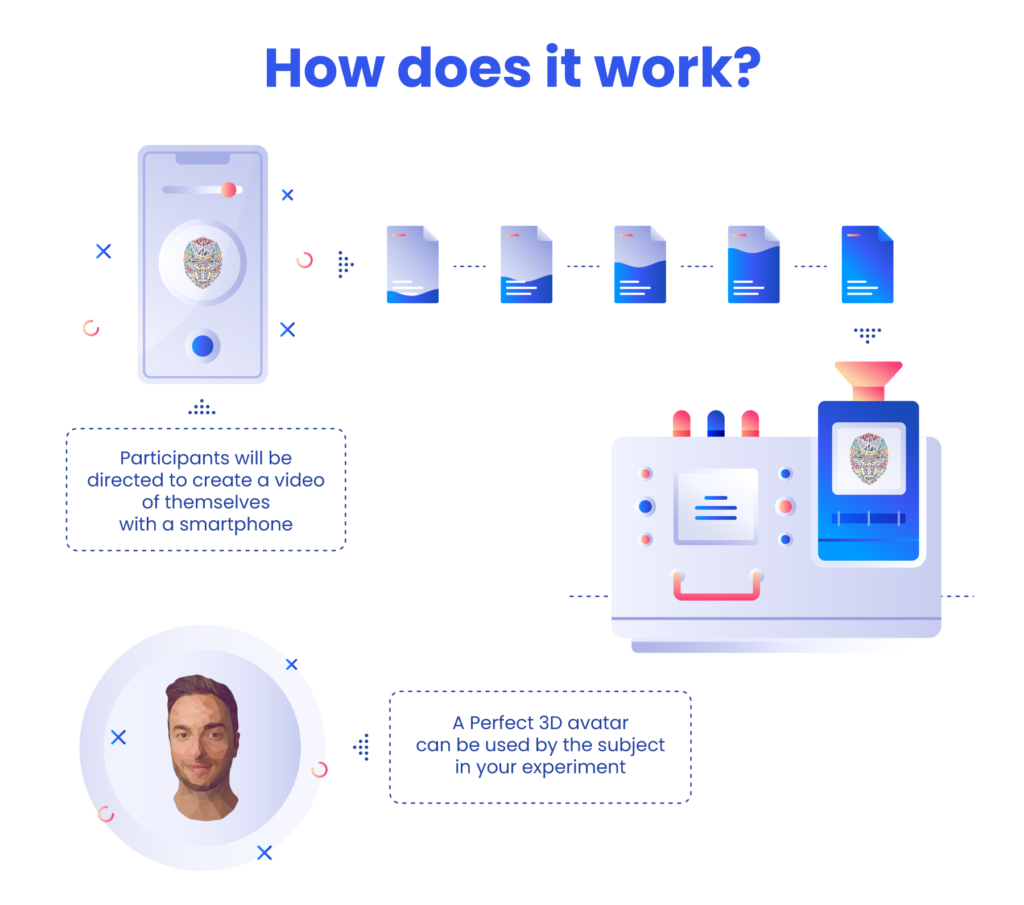 Variable WHO allows manipulation of the virtual avatar’s appearances, voice, and the social and object interactions they have within the virtual environment.

Deriving from Sanskrit word for ‘descent,’ an avatar is a graphical representation of the user or character in a digital world. The term avatar first originated in the gaming world; The earliest mention dates back to the 1979’s interactive role-playing computer game, Avatar, created in the University of Illinois’ Control Data Corporation PLATO system. Avatars are now gaining popularity in healthcare and clinical research as digital clones of patients and research participants. Avatars also extend to virtual agents present in virtual environments of researches.

The discovery of mirror neurons led by the observation of macaque monkey brains mimicking the firing patterns of an observed action (Gallese, Fadiga, Fogassi, & Rizzollati, 1996) gave rise to the idea of cognitively internalized actions in primates. In humans, the presence of mirror neurons has been associated with a range of complex thought processes such as intention understanding and even emotions and empathy (Acharya, & Shukla, 2012). In a virtual world, where avatars represent digital existence, mirror neurons can be argued to permit bridging of consciousness and experiences between the participants and their avatar. Further, the involvement of mirror neurons in social perception (Keysers, Kaas, & Gazzola, 2010) could also contribute to the credibility of virtual agents in the virtual environment based research.

Research participants often explore the virtual world in first person view, allowing them close to real experiences within the environment. However, participants can also explore the environments in third-person controlling a digital clone of themselves. Regardless of the viewpoint, avatar design can have an influential effect on the participant’s behaviors within the environment via the process of Proteus Effect. Yee and Bailenson (2007) observed that participants would change their social interactions in the virtual environment based on the appearance of their avatars. Participants with attractive avatars indulged in more intimate interaction (in terms of self-disclosure and interpersonal distance) with confederate avatars as opposed to those assigned the unattractive avatars. Further, the attractive avatar group tended to offer an unfair split in a negotiation task as opposed to the unattractive group that displayed significant inclination to accept an unfair split. In another study, the age of the avatar was seen to influence interactions. It was observed that older-adults (ranged between 60 and 85 years) found it easier to disclose more information about themselves and trust an agent avatar that shared similar age as their avatar (Lee, Xiao, &Wells, 2018). When given the opportunity to design their avatars, Triberti, Durosini, Aschieri, Villani, and Riva (2017) observed participants altered their avatar’s appearances depending on the type of virtual environment and the types of audience they would interact with. The shift in behaviors in accordance with the digital avatar appearance is something that must be considered when designing the participant’s avatar in research.

While virtual avatars allow the participants to indulge in behaviors they necessarily wouldn’t in real life, it is important to control the extent of interactions and possible actions in the virtual environment. In tasks such as the Virtual Morris Water Maze, it may be necessary to ensure that the participant is not overwhelmed with the possibility of drowning (for more virtual mazes click here). It is also important to ensure that standardization of possible interactions and agent avatars do not take away from the realness of the simulation.

Have any questions? Ask anything!