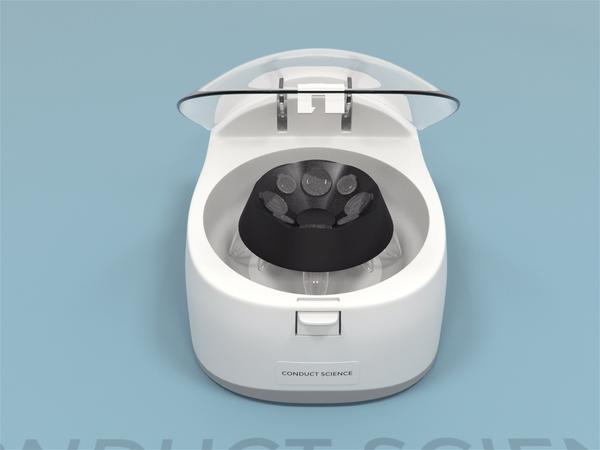 A modern-day laboratory centrifuge is a motor-driven device intended to accelerate the sedimentation procedure by administering centrifugal force. Essentially, the purpose of the instrument is to separate the elements of a liquid. Different kinds of centrifuges are utilized as a part of the clinical research facility for separating suspended particles from a liquid in which the particles are not dissolvable. It is also possible to separate liquids of varying specific gravity.

Laboratory centrifuges are broadly utilized as a part of hospital facilities or different industries where they are utilized for isolating suspended material from an assortment of a medium. This is accomplished by following the sedimentation guidelines, where centripetal acceleration brings about the movement of denser substances towards the radial direction.

There are three general categories of centrifuges: the horizontal rotor, the fixed-angle rotor, and the ultracentrifuge. Several types of horizontal and fixed angle rotor centrifuges can be commonly observed in the clinical lab. These incorporate bench-top and floor-standing units, high-speed units, and refrigerated units. Fixed-angle rotor centrifuges are perhaps the most widespread type of centrifuge devices that can be found in a lab.  Devices used for particular objectives may incorporate microhematocrit, cell washers, and cytocentrifuge frameworks.

In clinical research centers, the centrifuge generally works as a filtration or packing instrument. Nowadays, the advancement of the large-batch centrifuges that can sediment a precipitate from a liquid sample in a short duration of time have for the most part supplanted the tedious procedure of filtration. This progress has expedited the practice of separation and when combined with refrigeration, has likewise diminished sample risk to a minimum.

The potential of the centrifuge within the laboratory setting was initially explored by Friedrich Miescher. In 1869, Miescher utilized an unrefined centrifuge framework to isolate a cell organelle. This method prompted the revelation of a vital new category of biological constituents, later to be referred to as nucleic acids. The work of Miescher was quickly recognized and expanded further by others. In 1879, the primary continuous centrifugal separator was presented by Gustaf de Laval. This advancement gave rise to the possibility of commercializing the centrifuge for the first time.

The centrifuge is a device utilized in almost every biomedical research laboratory around the world. Centrifugation is a procedure by which a centrifuge is utilized to isolate elements of a multifaceted liquid mixture. By spinning sample test tubes at high speeds, a centrifugal force acts upon the elements of a given mixture, which forces the increasingly dense particles to relocate far from the axis of rotation whereas lighter ones advance towards it. These particles can deposit at the base of the test tube which is also known as a pellet, and this separated sample, or the rest of the mixture, the supernatant, can be additionally managed or examined.

The basic components of a typical centrifuge consist of the chamber which encases the internal components, a cover with latch, the rotor of the centrifuge with shields or cups, and the motor drive structure. The majority of centrifuges also contain a power switch, a braking device, a speed control, a timer and perhaps a tachometer.

Daily inspection, periodic functional checks, and excellent preventive maintenance are necessary for the productivity and lifespan of the centrifuge. A regular timetable for system checks must be formed to guarantee the proper function of the device. It is important to follow the general instruction manual for precise operation and maintenance strategies.

The main purpose of the centrifuge is to separate immiscible fluids into layers according to their density. To make certain that the centrifuge performs its task proficiently, it is essential to balance the weights inside the device. To achieve this purpose, pour the liquid sample that needs to be separated into a test tube. Try not to pour the liquid all the way to the top and leave the test tube half empty. It is important to have an even number of test tubes. Nevertheless, if the quantity of test tubes isn’t even, fill a test tube with water up to a similar height as the sample. It is essential that each test tube has another test tube positioned directly opposite it to maintain the balance of the centrifuge. On the off chance that you have three tubes, you can arrange them in a triangle, so they are equidistant from each other.

Once the test tubes have been placed into the centrifuge, note the position and ensure the balance is maintained.  Centrifuge rotors can attain high speeds and have a great deal of kinetic energy. If the device is not properly balanced, the whole centrifuge unit can be thrown from its position and cause serious damage. The next step is to close the lid and set the timer as per requirement. When you verify that the rotor and lid are secure, start up the centrifuge and supervise until it has come up to the required speed. It is best not to open the lid until the centrifuge has completely stopped. Once the centrifugation process is complete, remove test tube samples from the centrifuge and identify the samples according to the position in the device. It should be possible to see the specimen at the base of the test tube in a pellet that has now been separated from the rest of the solution or supernatant.  The supernatant can be removed by either pouring it off, or it can be suctioned off.

The contemporary centrifuge device has many applications in the fields of clinical and blood banking; microbiology; tissue culture; molecular biology and genomics; drug discovery; and proteomics. There is a wide range of centrifuges available from large floor models to various benchtop units, and any one of them can be utilized according to the requirements.

In general, centrifugation has an important role in both the fields of biological sciences as well as industrial sectors. In the biological field, medical research facilities utilize centrifuges to separate plasma from heavier blood cells. Modern centrifuges can even separate liquid samples of various-sized molecules or minute particles, for example, cell organelles. Special purpose units consist of uses such as quantitative blood cell pressing for estimating hematocrit, automatic cell washing and preparing elements for immunohematology, and monolayer cell preparations for cytology. Ultracentrifuges utilize elevated speed and force to accomplish complex and accurate quantitative separations of extremely small particles or macromolecules. The device can also be used for the production of biological products by techniques such as the separation of blood cells, purification of insulin by precipitation of various fractions of proteins, and separation of a large portion of the proteinaceous medications and macromolecules.

Additionally, the centrifuge has various applications in the industrial sector. There are procedures on which the application of centrifuge is based which include preparative techniques such as velocity sedimentation centrifugation and preparative differential sedimentation.  Furthermore, it is used in the pharmaceutical industry for the mass production of drugs, biopharmaceutical examination of medications, evaluating the molecular weight of colloids, and analyzing suspensions and emulsions.

Furthermore, the centrifuge has commercial applications in various fields. It is used in the water treatment sector for the separation of solid substances from highly concentrated suspensions and to dry sludge. In the sugar industry, it is used to isolate sugar crystals from the mother liquid mixture. The centrifuge is also used in the oil industry to separate solids from the drilling fluid.

Preventive measures should be documented and performed at frequent intervals similar to system checks. It should include inspection of lubrication on bearings of the upper and lower end of the motor shafts. Motor components like the brushes need to be removed and inspected for wear. The electrical and mechanical integrity of the device must be maintained. Both the grounding resistance and the current leaking need to be regularly checked. The rotor, shields or carriers, gaskets, latches, hinges, and control knobs need to be observed to establish that they are all working properly and in good condition.