The glass is an inorganic, transparent, rigid, non-crystalline, and versatile material made up of a mixture of metal oxides fused at high temperatures. The glassware is widely known across the globe for its three significant properties: transparency, stability and inertness, and malleability. The transparent nature of the glass enables the user to observe a reaction taking place within. The stability and inertness prevent the glass from reacting to the chemicals used in the laboratory. The malleable glass offers the creation of new designs and shapes of the apparatus and repair if broken.

Years of development and practice have yielded the present nature, composition, and structure of the glass, as well as the shapes and designs made from it. Wall thickness, angles, dimensions, and height-to-width ratios are varied to meet the specific challenges and needs of the laboratory practices. Each laboratory glassware is designed according to the function it is going to perform.

Physical and Chemical Properties of Glass

Different types of glass possess different properties depending on their chemical composition and preparation. Out of the physical and chemical properties of the glass, the expansion properties (the amount of size increase upon temperature increase, refractive index (how light passes through the glass), viscosity (the ability to remain consistent and integrated as temperature increases), and dielectric properties (electrical resistance) are of particular interest to the laboratory scientists.

There is no single melting or boiling point for glass. The glass tends to maintain its physical shape after it begins to soften at high temperatures. However, on the temperatures above the softening point, the glass sags under its weight because of the external forces such as gravity. The glass surface gradually loses its form as the temperature continues to rise. Then, on further higher temperatures the internal forces, such as surface tension, cause sharp corners on the glass to round, and the glass starts “beading up” on itself. Eventually, the glass collects into a thick, liquid puddle. The viscosity of the glass has an inverse relation with temperature. As the hotter a glass “liquid” gets, the less viscous it becomes. In fact, the high viscosity of the glass puddle prevents crystallization. The high viscosity of the glass beyond the crystallization temperature inhibits atomic mobility and prevents the atoms from clinging together to make crystals. Different properties of the glass on varying temperatures should be considered before manufacturing and handling the glassware to get desirable properties and functions

Different types of glass and their properties are discussed below.

Borosilicate glass possesses extraordinary physical and chemical properties that enable using of this glass not only for the production of laboratory glassware but also for various other purposes including pharmacy (vials), medicine (glass syringes), production of the brilliant lighting unit, various branches of the textile industry (fingers) and in other practices where higher temperature and chemical resistance are preferable.

Borosilicate glass is inert to all materials except hydrofluoric acid, phosphoric acid, and hot caustic solutions. Also, the borosilicate is non-reactive with water and acids. Only a minimal amount of monovalent ions may be released into the surrounding medium at the beginning of the water or acid impact. A non-porous layer of silica gel is created on the glass surface gradually after water exposure. This layer inhibits the surrounding medium to influence the glass further. Only hydrofluoric acid and hot phosphoric acid can impact the borosilicate glass since both acids prevent the creation of the silica gel layer on the glass surface. Increasing temperature and concentration increases the alkali’s impact on the glass. Scales from the volumetric glass can be removed by surface etching.

Soda-lime glass is also known for its excellent chemical and physical properties. The products that resist the impact of chemical medium and temperature differences momentarily and limitedly are mostly manufactured of soda-lime glass. Lower energy demand and longer working times make soda-lime glass the most inexpensive type of glass to manufacture laboratory glassware. Also, it can be recycled easily. Usually, the soda-lime glass is used to make pipettes.

The Soda-lime glass is not as resistant as Borosilicate glass. However, it shows some hydrolytic resistance.

There are three major categories of glass used in the laboratory. These categories include soft glass, hard glass, and high-temperature and UV-transmission glass.

The soft glasses are physically softer than other glasses as they abrade more easily. Besides, these glasses tend to maintain their soft working properties over a higher temperature range. The most common type of soft glass is the soda-lime glass. The soda-lime glass is a mixture of carbonate of sodium or sodium oxide (Na2O), and calcium oxide (CaO) or magnesium oxide (MgO). Because of its lower energy demands (lower melting temperatures) and longer working times, it is the most inexpensive type of glass to manufacture laboratory glassware. The quality of a soft glass is based on the proportions of its constituent materials. Typically, 8% to 12% lime (by weight) and 12% to 17% soda (by weight) are used to make the soft glass. Too high lime concentration levels may cause devitrification during the manufacturing process. On the other hand, too low lime concentration can subject the glass to natural weathering and water attack. In addition to the soda-lime glass, sodium silicate and lead glass are examples of soft glass.

The significant disadvantage of using soft glass for laboratory glassware is that any apparatus made with these glass types are essentially non-repairable. Also, the laboratory apparatus made of soft glass is likely to shatter when the flame of a gas-oxygen torch touches them as its thermal coefficients of expansion are relatively high.

Hard glass has been given the name “hard” because of its ability to resist abrasion impact over three times the level of soft glass. Also, it sits at a higher temperature and, gets “harder” faster. Because of the lower thermal coefficients of expansion of the hard glass they can withstand much greater thermal shocks than the soft glasses. Besides, the hard glasses are chemically resistant to alkaline solutions and many other chemicals. Borosilicate glass is the most common example of hard glass.

The High-Temperature and UV-Transmission Glass

The high-temperature and UV-transmission glasses are commonly known as “quartz” in the laboratory. Quartz glass is popular in the laboratory because of its outstanding thermal and UV-transmission abilities. Unlike other glasses that deform and melt at temperatures more than 1200°C, quartz glass maintains a rigid shape. Besides, because of the extremely low thermal coefficient of expansion (approximately 5.0 x 10″7 Acm/cm/°C), it can withstand thermal shock that would likely smash all other glasses. Quartz glass transmits the broadest spectrum of light frequencies as compared to other glass types.

Materials in the Lab

A beaker is a cylindrical glass vessel used for holding liquids, storage, mixing, and transferring various solutions. The glass beaker is a multipurpose piece that is widely used in the laboratory to carry out a chemical reaction, measure liquids, heat the solutions or liquids over a Bunsen burner’s flame, or collect them in a titration experiment. The Uniform wall thickness of our beakers makes them ideal for heating applications with an easy-to-read scale and large labeling fields for easy marking. Increased glass content strengthens the beakers with great mechanical stability. The reinforced rim increases shock resistance and reduces the risk of breakage. 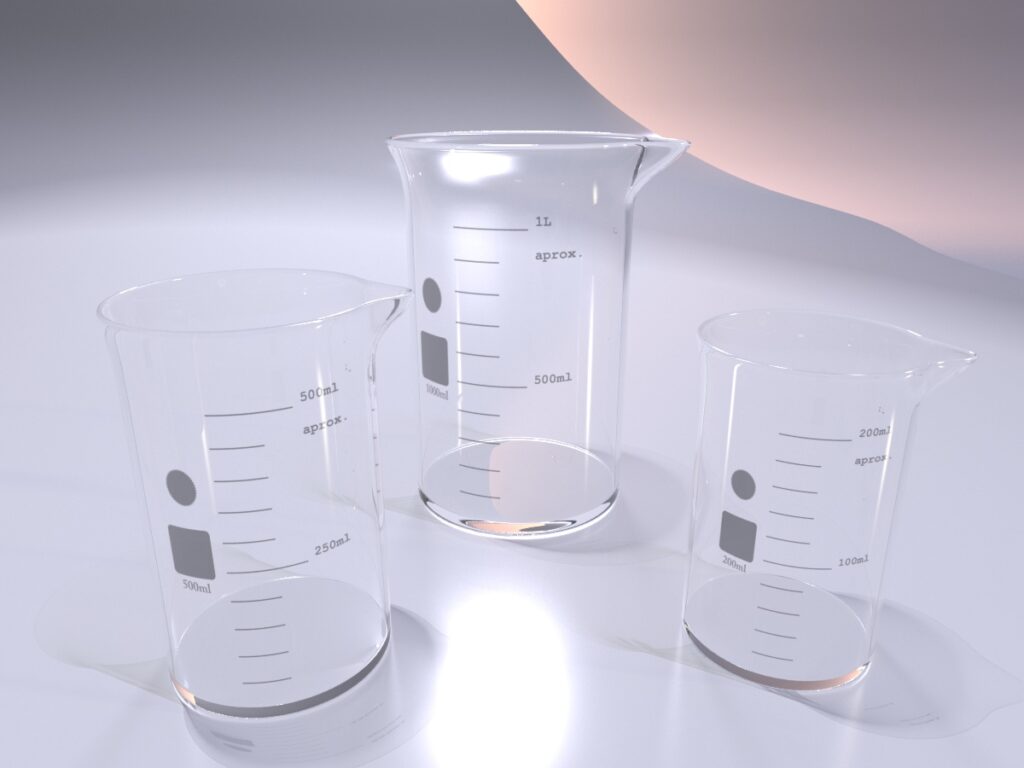 Volumetric flasks are employed to measure precise volumes of liquids to make standard solutions or weigh for density calibrations. The volumetric flasks aid in quantitative laboratory work. Made of low expansion coefficient and chemically resistant borosilicate; our volumetric flask is an optimum combination of resistance and readability. Volumetric flasks can be capped to prevent material in the flask from evaporating as well as to maintain the material’s purity. 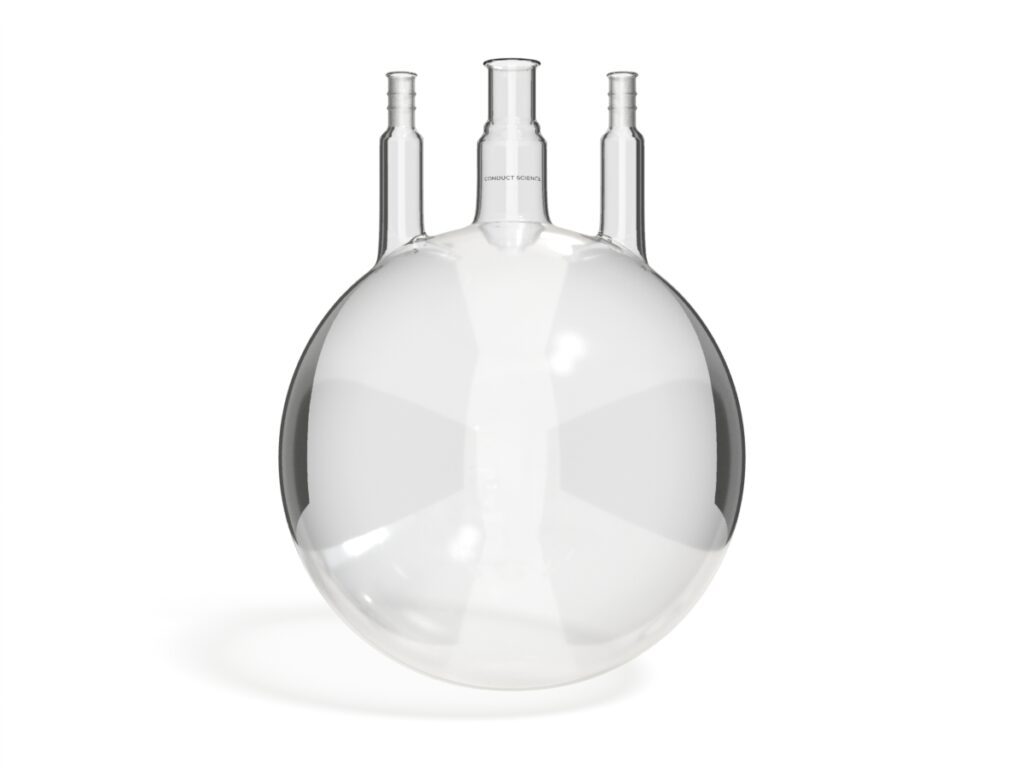 The proper procedure for filling and using the volumetric flask is as follows:

Method for the gravimetric purpose:

Method for making a definite solution:

To empty the volumetric flask, follow the following procedure:

Incline the flask slowly to provide a steady stream of liquid from the spout. Continue inclining until the flask is vertical and hold it for half a minute to empty the flask fully. Wipe the drop at the tip of the flask with the wall of the receiving container. Make sure not to remove the flask in a vertical position.

The glass bottles provide handlers with an extraordinary mechanical strength which prevents them from breaking and cracking. They offer a vast and diverse range of applications. The bottles improve handling, sample identification, and ease of use. Also, the bottles and accessories help to make laboratory work more comfortable, safer, and more economical. We provide a diverse range of laboratory bottles to enable the experimenters to perform various research manipulations in them. The glass bottle range includes:

The bottles are provided with reusable screw caps. The grooves and ridges on the screw caps are optimized to provide the user with more efficient and more comfortable tightening or removal, especially with gloved hands. The optimized cap sealing system ensures a liquid-tight seal. The bottles are marked with highly durable white ceramic. White markings on the bottles improve visibility and volume reading even for darker solutions.