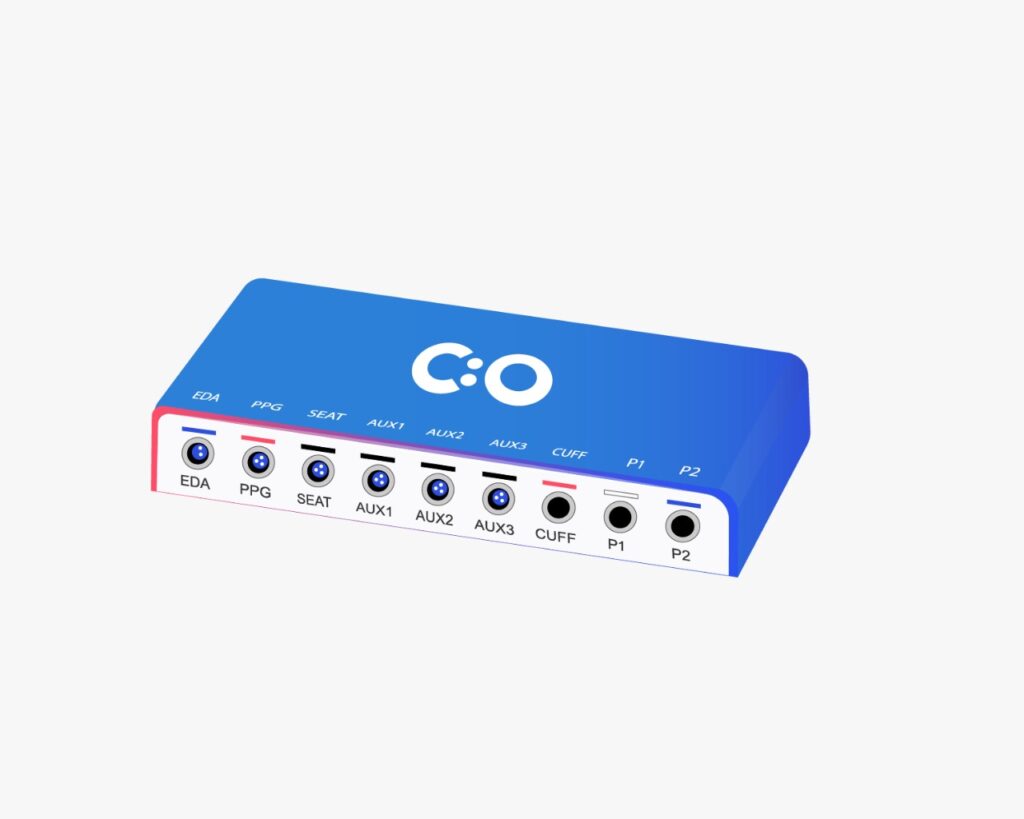 See all our Polygraphs

Record, save, and analyze. All in one.

The polygraph test or “lie detector test” is used to detect physiological indicators that someone is being deceptive while asking a series of questions. These indicators include: 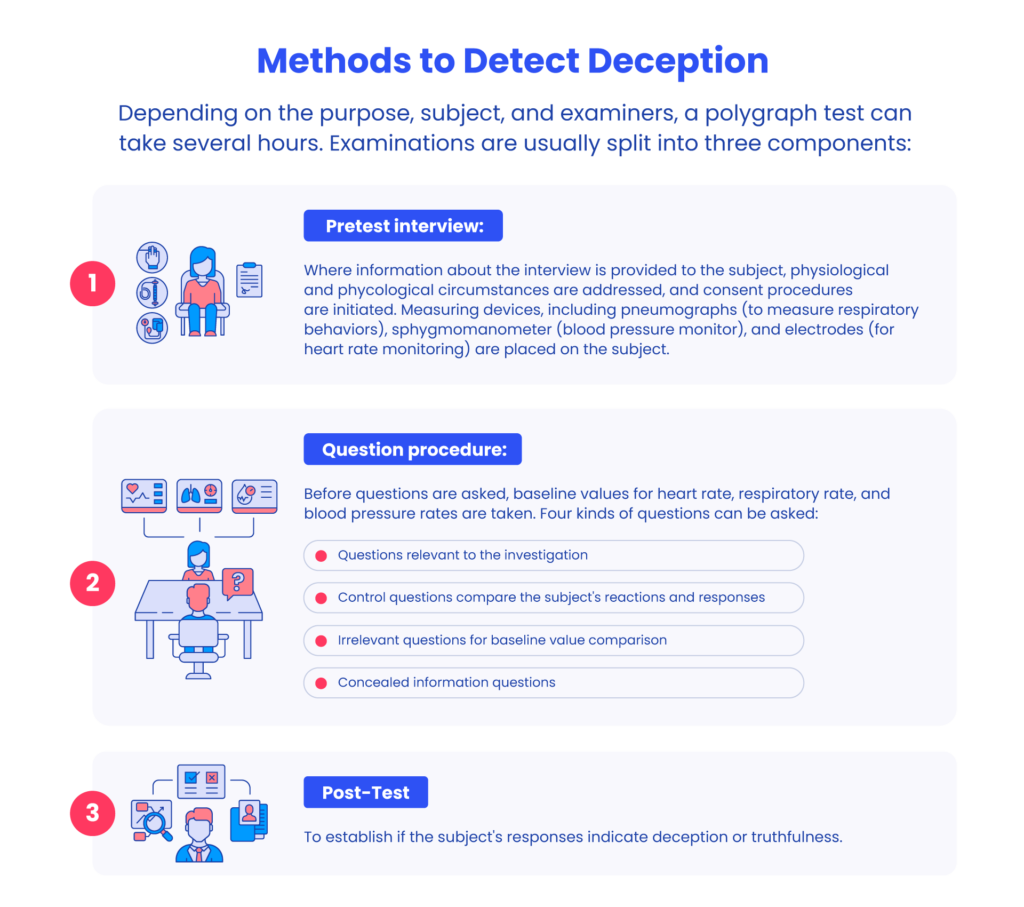 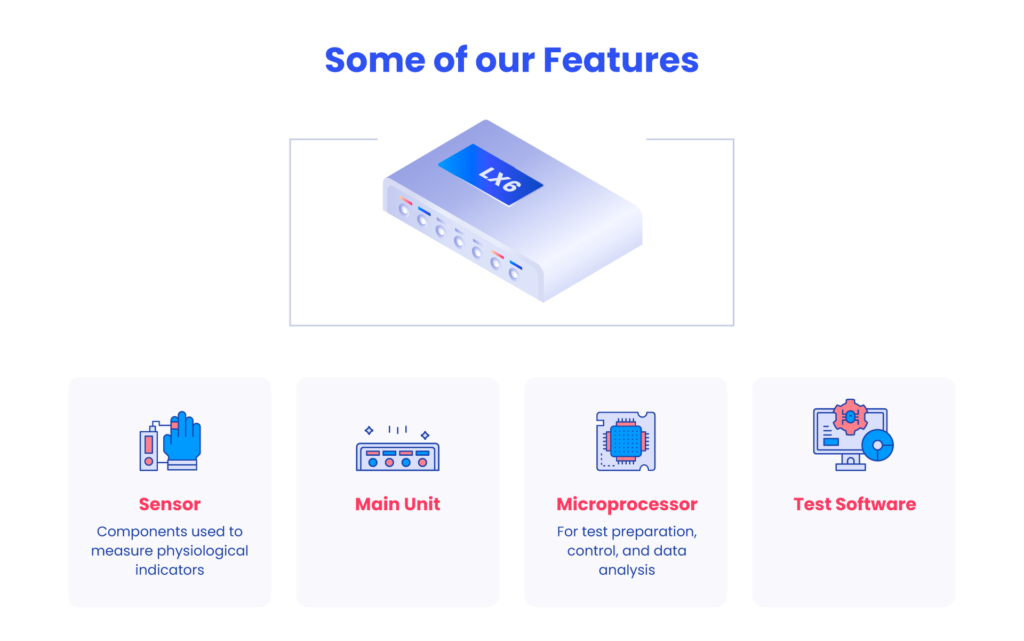 The Polygraph Test is commonly known as a “lie detector test.” It is a procedure that detects several physiological indicators, including pulse, blood pressure, respiration, and skin conductivity, which indicate if a person is being untruthful when asked a series of questions. The principle behind the polygraph test is that any untruthful responses produce different physiological responses than those associated with non-deceptive answers.

During a polygraph test, three medical instruments (pneumograph, galvanograph, and cardiosphygmograph) combined in one machine are attached to the person. The instruments include sensors to record four to six physiological responses when the person is asked questions. A data acquisition system collects the data from the equipment and translates it to analyzable information using sophisticated mathematical algorithms. The examiner first asks a few simple questions to create a standard for the digital signals and then moves on to the actual questions. The examiner analyzes the data during or after the test to identify any significant changes in the person’s vital signs to identify if they are lying.

Polygraph tests are used as an interrogation tool for various purposes, such as criminal suspects and screening new employees for employment in sensitive public or private sectors. However, it is important to consider that people can react differently when lying, or the examiner’s interpretation may not be accurate depending on their expertise. Therefore, a polygraph test is not always perfect.

Brief History of the Polygraph Test

In the late nineteenth century, Lombroso, an Italian criminologist, noted that a person’s blood pressure and heart rate increase when a person is lying. He recorded these changes on a graph. Lie detection technology was further developed during World War 1 by William M. Marston, a lawyer/psychologist. He also found out that a person’s blood pressure increased when a person was lying and used the technology to question prisoners at war. However, the first actual polygraph was developed by John Larson in 1921, which measured and recorded blood pressure and respiration. However, perspiration, which is the third physiological channel of the modern polygraph machine, was added in the 1920s by Leonarde Keeler. 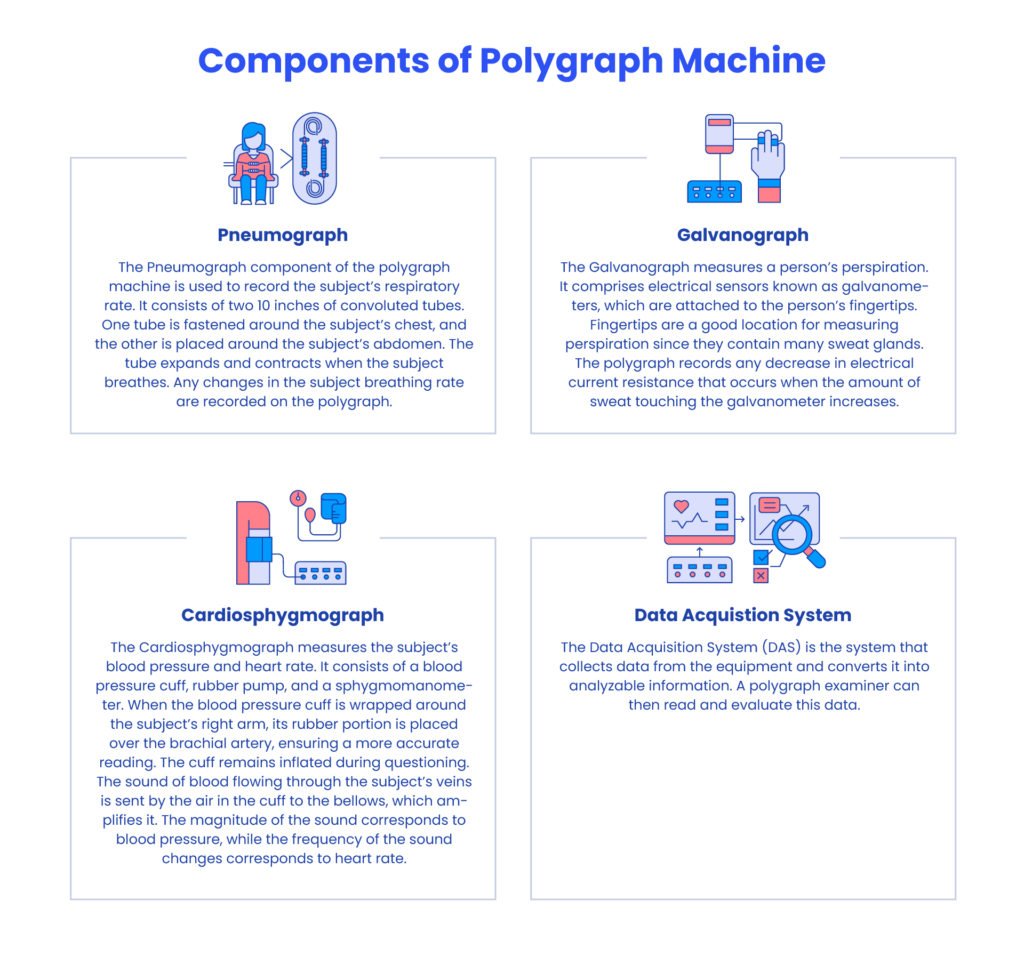 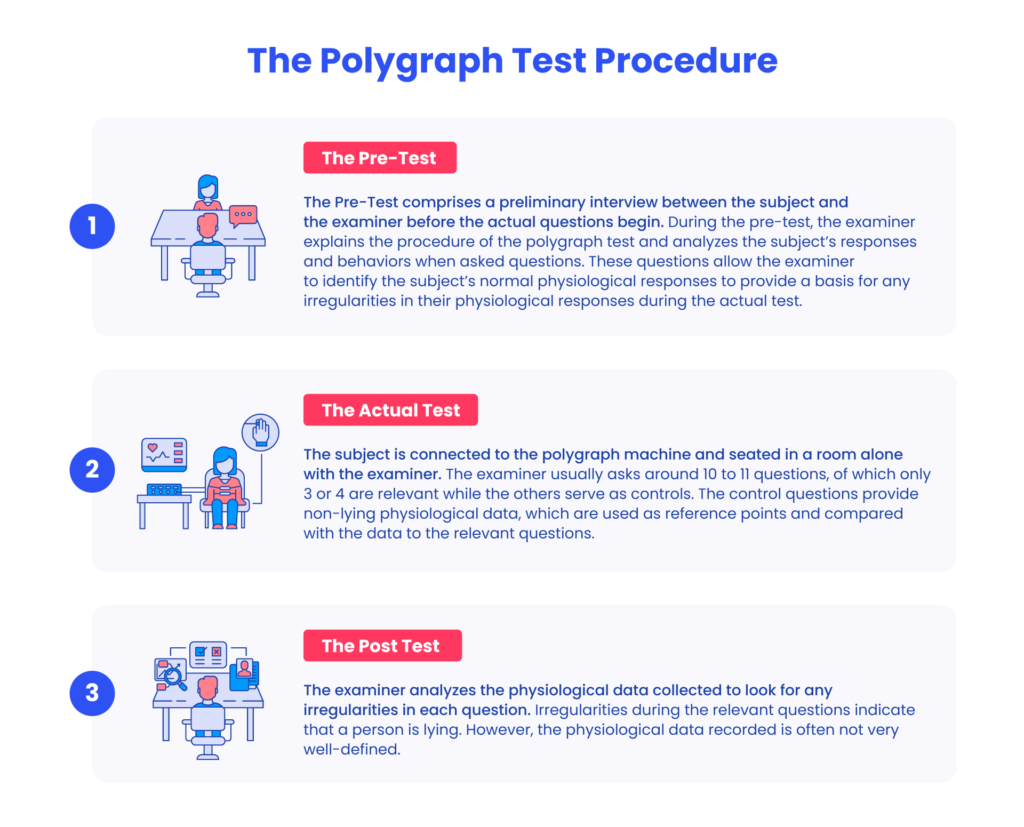 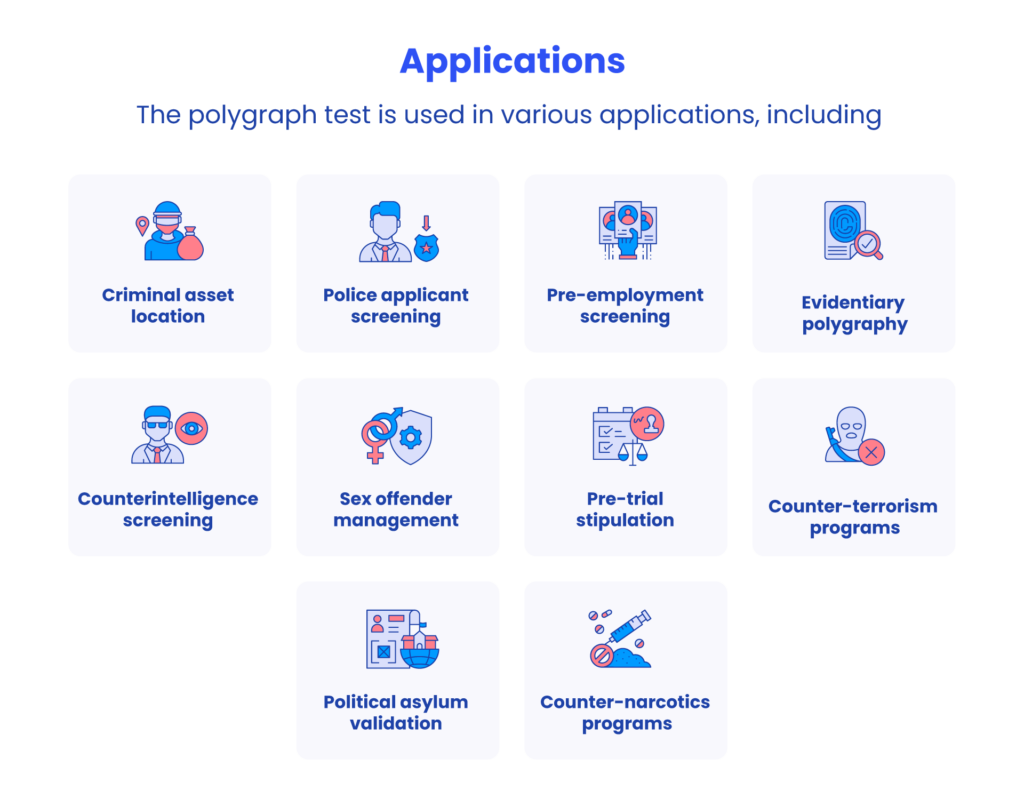 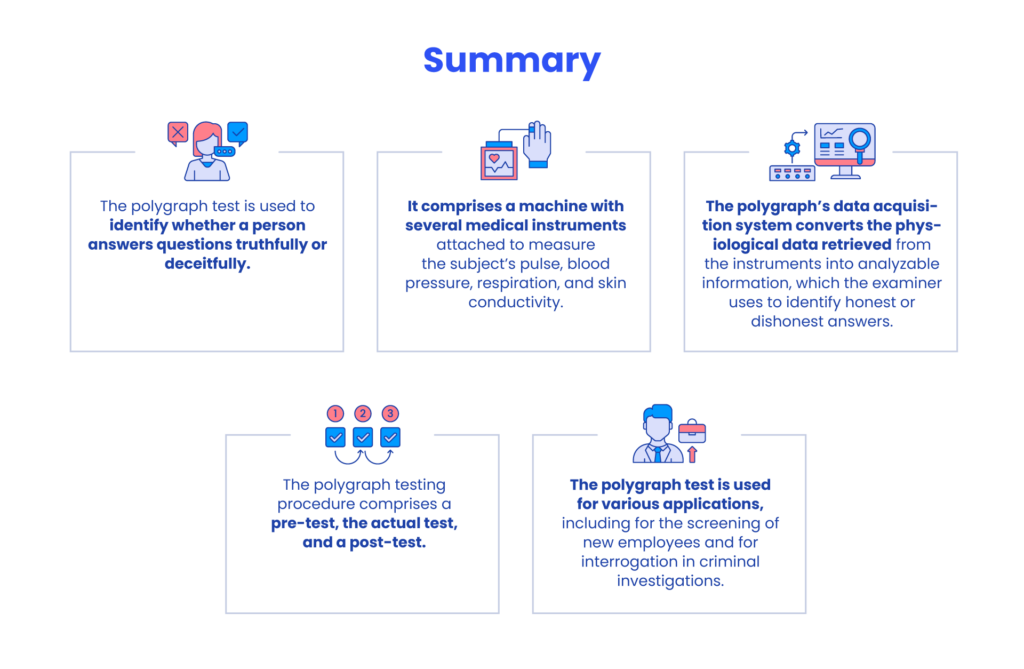