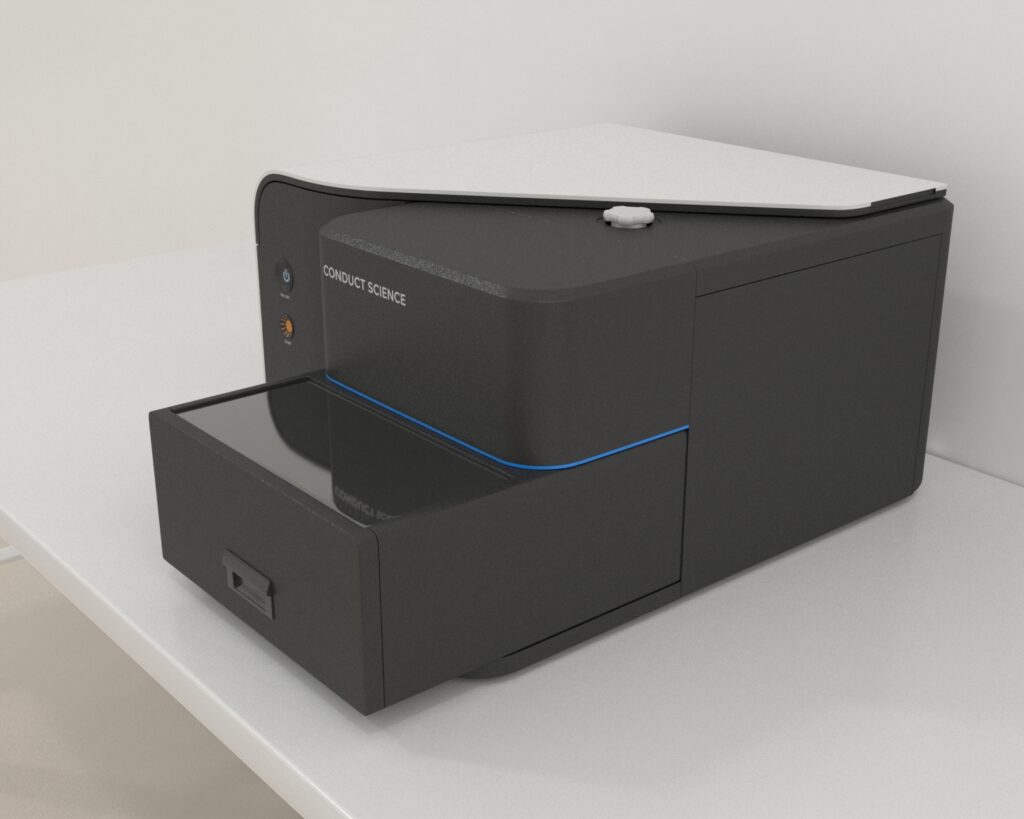 The Definitive Guide to Flow Cytometry for Scientists

Are you looking for a Flow Cytometry Sytem?

The Definitive Guide to Flow Cytometry for Scientists

Flow cytometry is an analytical technique that examines cells suspended in fluids. It uses a built-in laser beam to illuminate individual cells as the fluid passes through. The illumination causes fluorescence and scattered lights, which are emitted and reflected from the examining cell. These lights are split and filtered onto detectors and converted into electrical signals.

The technique provides the physical and chemical characteristics of every individual cell excited by the laser beam, providing information on the properties of the mixed cell population in minutes. Thus, flow cytometry is useful for analyzing biological samples such as blood, serum, dividing, and cancerous cells in research and clinical diagnosis.

What is Flow Cytometry?

Flow cytometry is a high-throughput instrument that measures the physical properties of cells suspended in fluid based on their abilities to absorb and scatter light.

The instrument can be benchtop or stream-in-air devices, but both consist of these systems:[1]

transports a sheath fluid and the sample fluid containing the target cells, collectively called the sample core, into the flow chamber and collects the waste fluids after the sample has been illuminated by the laser beam.[1]

houses the light source for the laser beam, which is used to measure the suspending cells. The system also contains optical lenses and detectors. The lenses are beam splitters and filters that collect and direct the fluorescence and scattered lights onto detectors like photodiodes and photomultiplier tubes (PMTs).[1-2]

Converts the light signals from detectors into electrical signals, which are subsequently converted into numbers. These numbers are collected and stored in a computer before they are displayed as histograms and graphs such as dot displays. Some flow cytometers also possess a sorting function where the illuminated cells are captured and collected based the on user’s definition.[1] 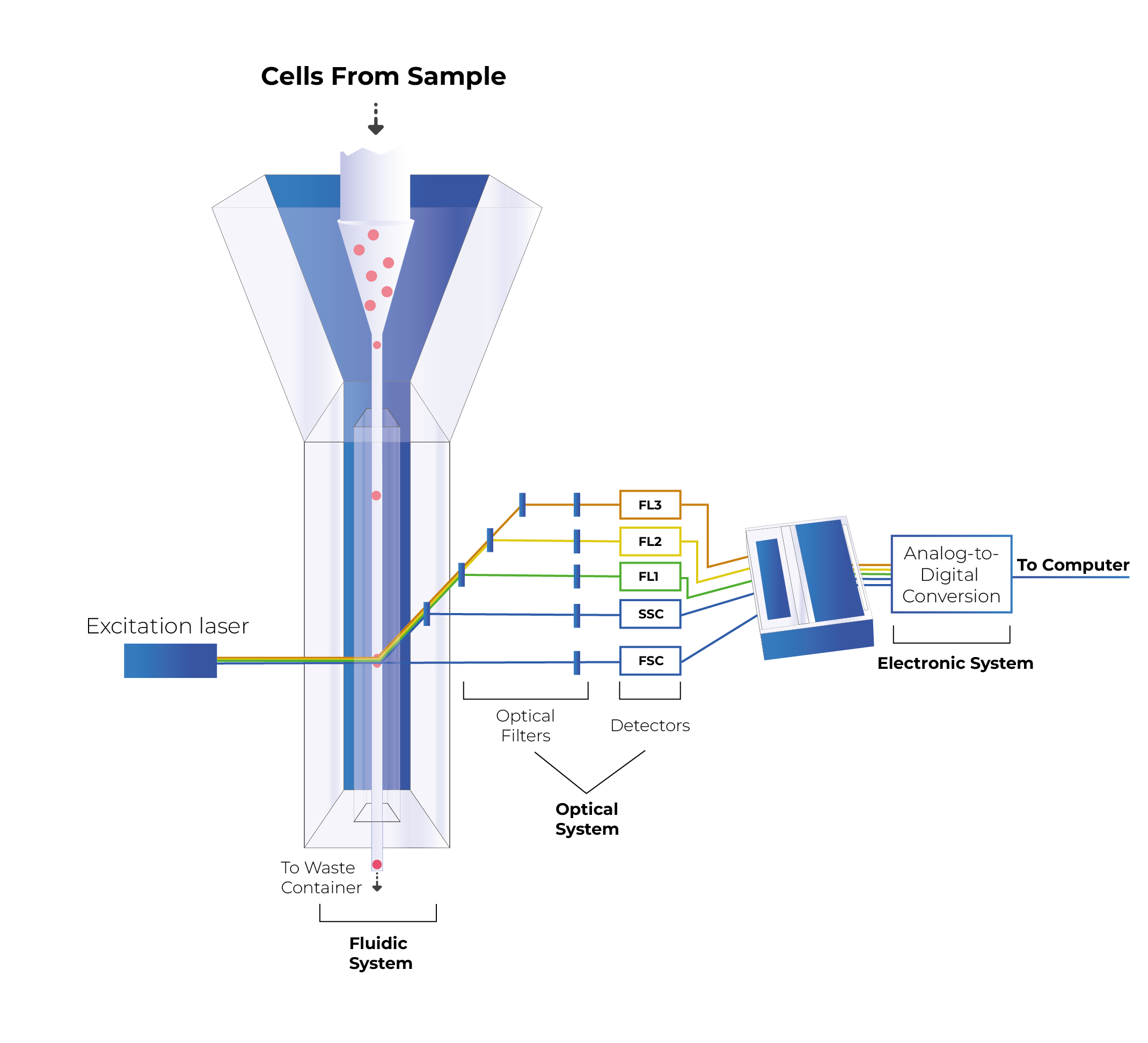 How does Flow Cytometry Work?

The three systems in flow cytometers achieve their tasks based on the following principles:

The sheath fluid is typically an isotonic buffer and is first injected into the fluidics system, creating a laminar flow of a smooth fluid stream with steady pressure. Subsequently, hydrodynamic focusing is created by interjecting the sample fluid into the steady stream of the sheath fluid.

The added fluid does not mix. Instead, it flows along the same axis as the sheath fluid but with different pressure and flow rate. The sheath stream accelerates the sample fluid and its suspending cells, causing the cells to become focused on the sample core where they can be struck individually by the laser beam.[1,3]

In benchtop cytometers, the sample fluids are injected upward into the flow chamber, called the flow cell. At the optically clear region or cuvette, the cells are illuminated by the laser beam, sending off fluorescence and light scattering.[1]

In stream-in-air models, sheath and sample fluids are pressurized downward into a small narrow aperture. Hydrodynamic focusing occurs at the nozzle tip where the sample stream is released in the air so the laser beam can excite it.[1,3]

Figure 2: Light scattering when the laser beam illuminates a cell in a flow cytometer[1]

When the laser light illuminates the sample cells, it ricochets in different directions depending on their physical properties.

Forward scatter lights (FSC) refers to the diffracted light, while the refracted light is called side scatter lights (SSC). FSC is generally used to determine the surface size or area of the cells; while SSC typically reflects the particle’s internal complexity.[1]

In addition to light scattering, the laser beam can excite the electrons of a fluorochrome, which is used to stain or interact with the sample cells. Soon after excitation, the electrons revert to their ground states, emitting fluorescent light with a wavelength that is longer than that of laser light.

Binds to the double-stranded DNA of non-viable cells. In flow cytometry, DAPI is often used in cell cycle analysis and cell death evaluation.

In addition, two different fluorophores can be covalently linked, turning into tandem dyes. They act as a Förster resonance energy transfer (FRET) pair where the laser excites one fluorophore, which donates its emitted light to the other fluorophore whose excitation spectra overlap with the donor’s emission spectra.[2]

Both flow cytometry and fluorescent microscopy rely on internal optic systems for measurement and analysis, they are different in their sample inputs and readouts.

Fluorescent microscopy is an imaging technique so its samples are not necessarily suspended in fluid. For example, cell suspension and tissue sections can be live-imaged when stained with fluorescent dyes or fluorescent-labeled antibodies without necessarily having to fix the cells.[4]

Another stark contrast between the two techniques is the readouts. The results of fluorescent microscopy are qualitative comprising images that reveal information such as cell morphology and protein localization. In flow cytometry, the outputs are quantitative, yielding values such as counts and signal intensity, including the mean or median fluorescence intensity or mfi.[7] 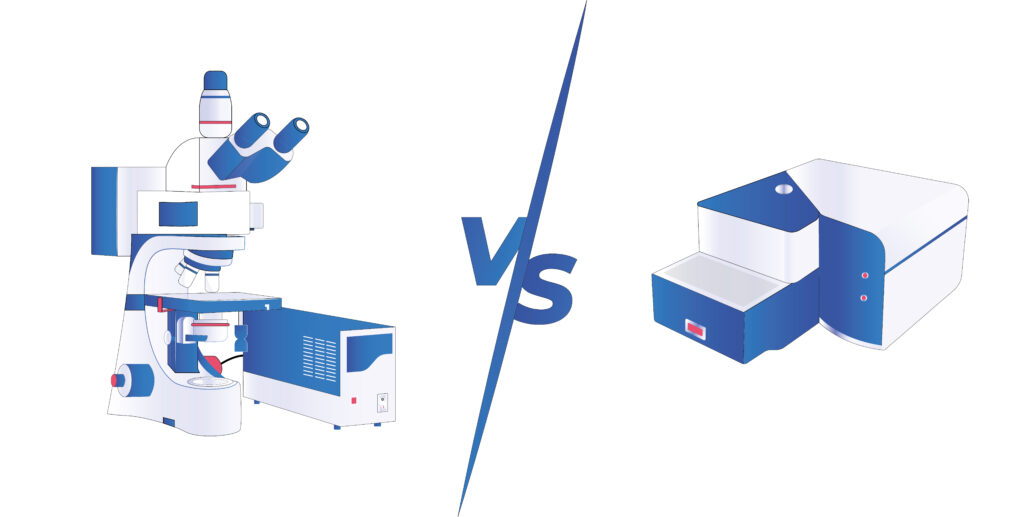 The high-throughout nature of flow cytometry is highly advantageous for routine analysis and clinical diagnosis. Advances in laser technology, fluorescent dyes, and proteins have improved flow cytometry instrumentation which improves the technique’s performance and capabilities.[2-3,5]

Notably, fluorescence-activated cell sorting (FACS) is a type of specialized cytometer that also acts as a cell sorter. With FACS, a subpopulation of cells in the samples can be sorted after they have been detected by the laser beams. It enables users to purify cells from samples for detailed analysis.[3]

Flow cytometers can accurately determine DNA content present in cells stained with nucleic acid-staining dyes. This is applicable for DNA-based analysis such as the DNA ploidy and cell cycle analysis (CPT® code 88182), which are used for cancer diagnosis and prognosis.[5-6]

For instance, the presence of rhesus antigen proteins (RhD) on the surface of the red blood cells can be detected and quantified by flow cytometers. The analysis is essential for physicians to determine whether and when RhD- mothers need to receive Rho(D) immune globulin (RhIG) which prevents RhD isoimmunization.[5]

The characteristics of target cells and analysis objectives must be deliberated in the study design. This typically includes choosing the appropriate laser lines, fluorochromes, and the values of parameters used in the analysis.

One major theme in analysis design is choosing appropriate controls, which in flow cytometry can be categorized into the following:

involve how the instrument is set up, optimized, and maintained. It usually includes setting up and calibrating the laser alignment, laser time delay, laser sensitivity, and voltage setup for the PMT.

PMT voltage setup can be achieved by (i) setting a quadrant gate that designates readouts from cells with low signals (i.e. unstained cells) as off-scale, (ii) selecting the optical peak from the plot between different voltages and their Coefficient of Variance (CV) where the detector is most sensitive to the fluorochrome of choice, or (iii) by calculating the value from the Standard Deviation of Electronic Noise obtained from the regression line of a plot between the electric noise CV and voltage range.[8-9]

Are established by creating cytometry gates that define positive cell subpopulations and by correcting the compensation value for all fluorochromes in the analysis. Gating controls are meant to reduce noises from laser excitation, non-specific staining, and autofluorescence, which are keys to distinguishing positive cells from negative ones.[8]

Gating controls are usually created after a cytometry run where outlier data points are eliminated using known properties of a single cell such as size and granularity. In many cases, a gate can be drawn upon a group of subpopulations so that the analysis can be focused on the cells of interest.[1, 8-9]

Additionally, appropriate controls must be included in each cytometry run to help set compensation values and establish cytometry gates. For instance, cell samples incubated with antibodies against antigens that are absent from the target cell surface, or isotope controls, will help determine fluorophore signals generated from nonspecific antibody binding.[8-9]

Illustrate how biological differences are reflected in flow cytometry data, for example, normal vs. diseased or viable vs. non-viable cells. They enable users to draw biologically relevant interpretations for samples.[8]

In general, flow cytometry samples are prepared in medium fluid shortly before the run. Tissue sections or cell suspensions are collected and washed several times to disaggregate the cells. Cells are subsequently stained by fluorescent dyes or antibodies.

If flow cytometry targets intracellular components, cells must be permeabilized to allow antibodies or staining dyes to penetrate the cell membrane. This is achieved by mixing cells with a fixation buffer that contains a fixative such as alcohols and aldehydes.

Another reason to fix the cells is to preserve the stained cells when flow cytometry cannot be immediately performed. Cells fixed in the alcohol-based buffer can be kept for up to 2 weeks in the fridge or 2 months in the freezer. Since aldehydes can cause cell autofluorescence, the fixation buffer must be removed, and the cells must be rinsed and suspended in another buffer because of storage. In this case, the fixed cell samples are stored in the fridge to prevent ice crystal formation.[1, 8-9]

Readouts obtained from flow cytometry are quantitative. They are numbers, that the computer uses to compute and store in a standard FCS format.

During flow cytometry, single parameter data such as FSC and SSC are displayed as histograms of signal values against the number of events. Multiple parameters are shown as two- or three-dimensional graphs, or dot plots, which can be marked into quadrants based on the population subclasses. Each quadrant represents a group of cells possessing similar characteristics. Customarily, the lower-left quadrant displays data points of cells that are negative for all parameters, while the upper-right shows data points for cells that are positive for all parameters.

Apart from the histograms and graphs, raw values from a flow cytometry run are collected by the computer and compiled in a spreadsheet. The data can be exported for additional statistical analysis, which can provide information for the biological question of interest.[1]