The Spiral Structure of Chromosome

A Chromosome is an organized package of DNA, located inside the nucleus. The structure of a chromosome involves six essential parts, that include: Pellicle and matrix, chromonemata, chromomere, centromere, secondary constriction, and satellite body.

So, chromonemata are the spiral structures that are embedded in the matrix of the chromosome and are the focus of this study.

The first study on the spiral structure of chromosomes was reported in 1880, by Baranetzsky in pollen mother cells of Tradescantia zebrina.

However, the study remained short of information until the discovery of cell division processes, and its significance was made around 1894[1].  Later, an efficient method was developed to study the spiral nature of chromosomes, which you will discover later in this article.

In the beginning, the spiral structure of chromosomes was only studied in the multiple species of three genres, to define the structure. It included Tradescantia, Trillium, and Osmunda[1]. Some other plants included later were, Lilium, Vicia, and Lathyrus. Furthermore, the structure was also observed in a few animals (especially in higher groups), like flagellate protozoa and grasshopper (family Acrididae– in which it was first reported).

The studies were performed by observing the chromosomes in different phases (especially prophase, metaphase, and anaphase are preferred) of meiosis and mitosis.

This article will give an overview of the spiral structure of chromosomes and what methods can be used to study them in plants, as well as animals. 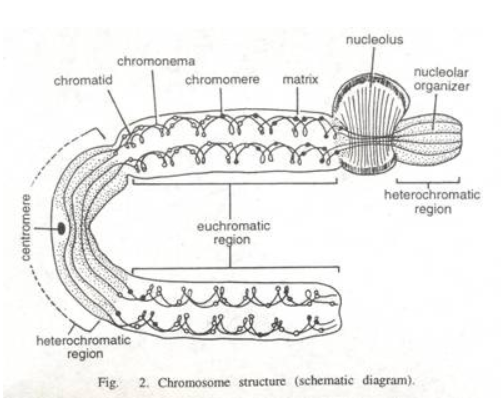 Figure: The schematic diagram of the structure of the chromosome, showing chromonema embedded in the matrix[4].

What are spiral structures?

Spiral structures are the condensed, thin, coiled, long, thread-like structures present in the matrix of a chromosome. They are also called chromonemata (plural) or chromonema. The term was given by Vejdovsky, in 1912[1].

1. Diameter and number of Gyres

The presence of major and minor spiral differs in different species, and on this basis, they are divided into three categories:

2. The geometrical form of the spiral

The interlocking (major and minor spirals interlock with each other or spiralize individually) of the two chromatids has a strong correlation with the geometrical properties of the spirals.

The chromonema has fibrils whose numbers differ depending on the type of species. The number of fibrils also varies depending on the phase of the division. It may be one at one phase and 2-4 at another phase[4]. The fibrils are coiled with each other and the geometry of coiling is categorized into two forms: plectonemic and paranemic.

Figure: The diagram shows the two forms of coiling of the chromonemata: (A) Plectonemic coil, and (B) Paranemic Coil.

The direction of coiling is random in the chromonemata, it can be right-handed or left-handed, on both sides of the centromere or in both the chromatids. In some chromosomes, the symmetrical coiling (one chromatid is right-handed while the other is left-handed) is also observed[3]. 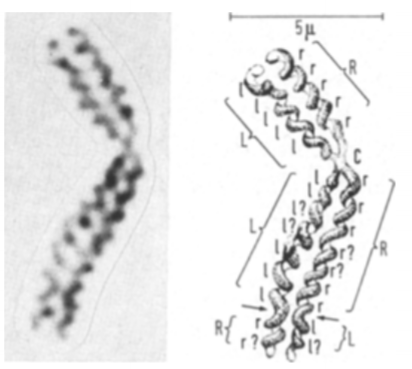 Figure: It shows (a) Microscopic image, and (b) Schematic illustration, of chromosome 2 of humans, which shows the symmetrical gyre direction[3].

Normally, in the centromeric region of the chromosome, the chromonemata are present in uncoiled thread-like structures. However, the centromere has three different appearances[3]:

Based on the different termination pattern of chromonemata, the telomere is categorized into two groups[3]:

Method to visualize the spiral nature of human chromosome

Human leukocyte is a favorite material for scientists to study the spiralization of the chromosome at mitotic phases, as demonstrated in the following steps[3]. 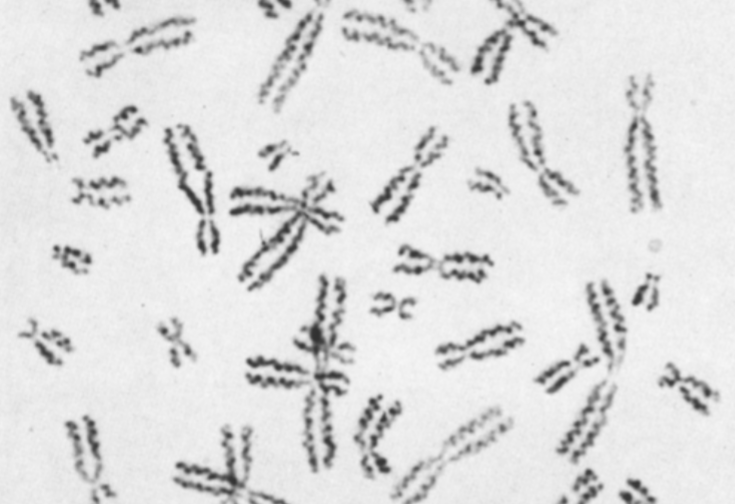 Figure: A microscopic image of the human chromosome showing spirals at the metaphase stage of mitotic division, in cultured leucocytes[3].

Method to visualize the spiral nature of plant chromosome 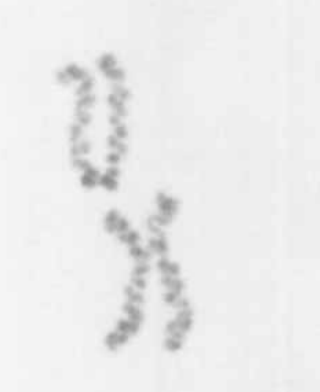 Figure: the microscopic image of the chromosome of the pollen mother cell of Lilium longiflorum, at the anaphase stage[2].

So far, researchers have studied the two forms (major and minor spiral) of the spiral structure, in the meiotic and mitotic phases of the chromosome, especially in prophase, metaphase, and anaphase. They observed that the number of gyres is lesser in the prophase, clearly visible in metaphase, and condensed or more in the anaphase.

The scientists then concluded that the spiral structure shows variations depending on the division (meiotic or mitotic), phases of the division, and the species which is being used for the study.

Colchicine and ammonia treatments have been a popular method to study the structure. The chemicals de-condense the spiral structure inside the chromosome to study its different properties. For example, diameter, gyre number, and coiling in different regions of the chromosome, such as centromere and telomere. However, the structure of chromosomes still needs a deep-dive to understand the processes that involve its functioning.