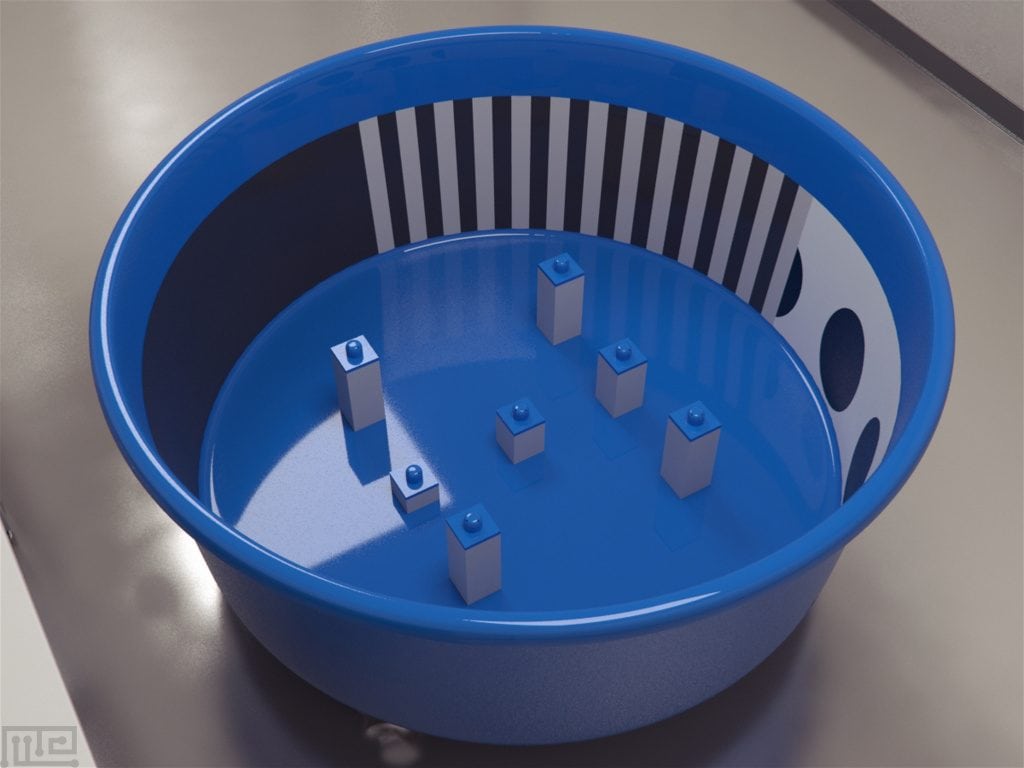 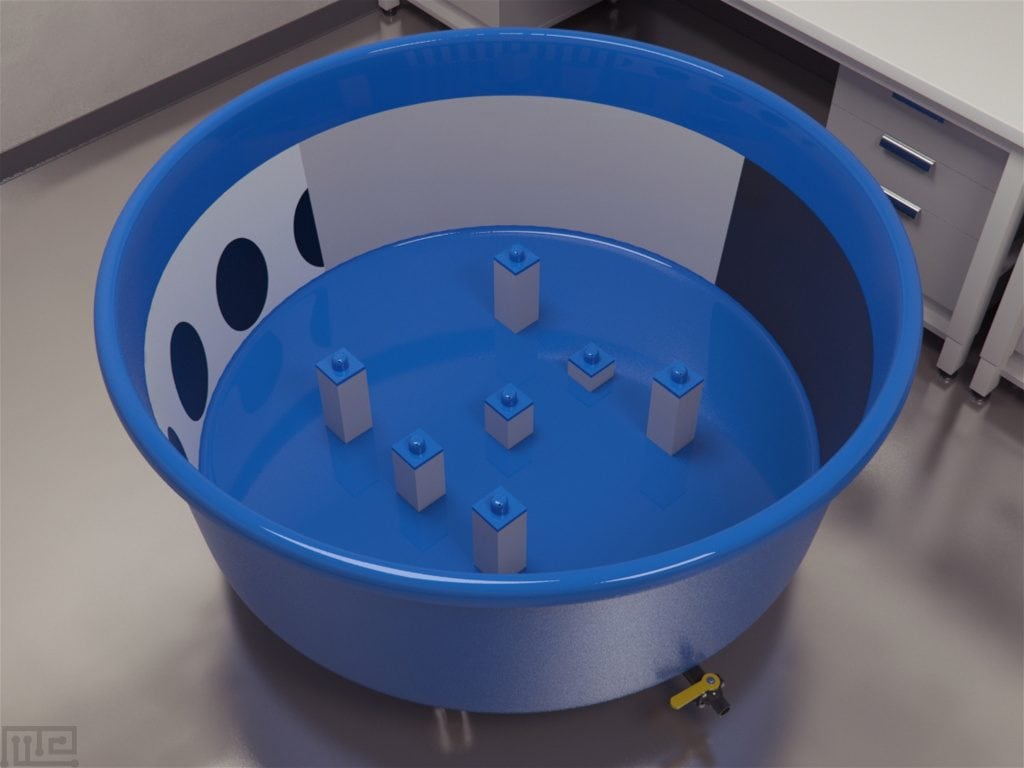 The open-field tower maze (OFTM) is a unique behavioral task in neuroscience used to examine the nature and mechanism of spatial learning and memory in rodents; with specific emphasis on place- and response-learning. The inserts are to be used with any Morris Water maze. Price does not include the Morris Water maze, which can be purchased separately

The open-field tower maze (OFTM) is a unique behavioral task in neuroscience used to examine the nature and mechanism of spatial learning and memory in rodents; with specific emphasis on place- and response-learning.  The task is conducted in a way that does not stress the subjects; as stress can alter the result of the experiment (Luine et al., 1994; Beck & Luine, 2010). The OFTM paradigm is based on the fact that a non-stressed rat is able to navigate through a maze with the aid of spatial cues (i.e. place-learning); and make a specific turn response (either to the right or left to find a food reward), irrespective of its position relative to spatial cues (i.e. response-learning).

Central to this behavioral task is the fact that rodents easily remember spatial locations, especially when spatial cues like food are used as incentive. The OFTM consists of a circular platform with food towers fixed at certain points around the central area of its perimeter, one of which contains the food reward. For place-learning, the task is similar to other paradigm such as Morris Water Maze, Y-maze and T-maze that require the use of hippocampal-dependent spatial reference memory. However, response-learning is dependent on the striatum (Poldrack and Packard, 2003). Basically, this ability to remember the location of the target tower can be effected by the administration of certain drugs (e.g estradiol) or in disease models (Lipatova et al., 2014).

Cole et al., (2007), traced the theories of learning back to Hull (1943) with particular emphasis on the learning of motor responses; and how mazes such has the cross maze has been used to better parse either place or response learning in rats since 1946 by Tolman, Ritchie and Kalish. The OFTM is an improved version of other open-field mazes developed hitherto to assess spatial learning in rodents.

The OFTM apparatus consists of four food towers set 54 cm apart, glued to the center portion of a circular floor 183 cm in diameter. The circular floor has a boundary wall constructed from white laminate, and 40 cm high with inside painted with different patterns, such that one quarter of the wall is painted with black and white stripes, one, solid black; one quarter, white with black circles, and the last quarter solid white. The floor of the maze is constructed with black laminate and glued to the top of plastic table. The four square-shaped food towers with dimension 8 cm x 8 cm x 20 cm; are made from white PVC post. The tops of these towers are covered with black laminate; and a black opaque plastic food cup, 2.5 cm in diameter and 2 cm deep, created from a 35 mm film canister is  attached to the center of the top of each tower with a small screw. Each food cup has a screw-top lid with three small venting holes (3 mm diameter). This ensures that the rat cannot locate the target food tower using olfactory cues. Also, the height of the towers makes it impossible for a rat to investigate the content of a food cup without rearing.

For pre-training purposes, three temporary “pre-training towers” made of the same material like the food tower but different in heights (5 cm, 10 cm and 15 cm high respectively) are taped to the maze floor during the pre-training phase.

The testing area should be sufficiently but dimly lit to allow animals to see and explore their surroundings while avoiding stress from bright lights. A sound machine is used to play white noise (approx. 70dB) in the background.

A mounted video camera like Noldus Ethovision XT is used to record the experiments from above the maze. Tracking software can be used to follow the moments of the animals within the maze. Live scoring can also be performed.

The purpose of the OFTM is to assess both behavioral and neurobiological mechanisms of spatial learning in animals and applicable in the study of place- and response-learning in rats. Typically, in the case of place-learning, animals can remember the specific food tower they retrieved food reward from previously; while for response-learning, they can make the right response (right or left turn) they made to previously to retrieve food reward from a tower.

Pre-Training for the Open-field Tower Maze

To motivate food-scavenging behaviors, experimental animals are food deprived the night prior to testing. Meanwhile, animals should maintain about 90% of their free-feeding body weight throughout food rationing and the testing period.

To begin the training and testing process, prepare the apparatus by ensuring it is clean and odor-free. Place a food reward (fruit pebble) in each uncapped food cup on the seven food towers. Then, place the animal in any random location of the maze and allow it to find and consume all seven food rewards.

For training purpose, the four food towers are baited with food reward but three are covered and one (the target tower) left open per time. Also, the rats are separated into place-learning and response-learning groups.

Mark four start locations (SL1-4) in the OFTM and assign each rat two of these start locations. Any of these locations serve as the release point. The start location/ release point within and between each training day, the type of learning (place vs response), the “target tower” (for place learners) and the turn each response learner is trained to make should be counterbalanced during the training and testing phases.

For place training, the same target food tower is used throughout. The rat could be released from any of the two start locations. For example, with food reward placed on T4, the rat is released from SL2 or SL4; or with T1 as target tower, SL1 or SL3 is used as release point.  Place-learners solve the OFTM by finding the specific location using the spatial cues. This is shown in Figure 1A below.

Figure 1: Schematic for training rats on place- and response-learning.

All rats are subjected to 4 trials per day for 12 days (i.e. a total of 48 training trials) until they are able to achieve about 80% correct first choice response. Thereafter, testing phase is begun.

Testing and Evaluation of Place- and Response-learning using the OFTM

For a response-learner  that was initially released from start location SL2 or SL3 and learned to turn right to get food reward on T2 and T4 respectively, the start location in this case is changed  to either SL1 and SL4 with either T1 or T3 as the target food towers respectively so as to ensure right turn also. This is shown in figure 2B below.

For evaluation of either place- or response-learning, the number of responses (indicated by the rat rearing up over the food cup) a rat makes to find the target food tower during each trial is counted. The percentage of first choice responses within each training day is calculated to construct learning curves across days. Also, the number of trials it took a rat to achieve an a priori set criterion is calculated. An a priori criterion of first choice responding of 8 out of 10 consecutive trials may be used.

A sample data can be visualized by comparing the effects of chronic and cyclic estradiol treatments on place- and response-learning in ovariectomized female rats. To assess effect of chronic estradiol treatment, 10 μg/kg is subcutaneously administered to rat daily (continuous conditioning) as against a sham control where a placebo (peanut oil) is administered. However, for the cyclic treatment, estradiol injections are given at intervals (like every 4th day) and the placebo on the other days. In this experiment, half the rats in each condition were trained with place-training procedures and half were trained with response-training procedures. Basically, estradiol induces differential effects on spatial learning and memory (Lipatova et al. 2014). Rats under cyclic estradiol treatment require fewer treatments to reach test criterion than those in sham control or continuous conditioning. However, while the effect on response-learning is negligible for both cyclic and chronic treatment, it takes fewer trials to for subjects to get test criterion in these two treatments than in the sham control. .

The strength and uniqueness of the OFTM is threefold. Firstly, unlike other paradigms, it ensures that the subjects are non-stressed. In fact, this makes the model an exceptional choice in assessing spatial learning under stress-free conditions. The absence of stressors and familiarization with the maze before testing allow for better observations of working memory in the animals as they perform in the maze. Secondly, the OFTM measures learning using the percentage of first choice responses the rat makes to find the food reward. This is significant as other dependent measures common to other mazes (e.g. Morris Water Maze and Barnes Maze) like speed or distance a rat covered to reach its target location are easily affected by factors not related to learning. Lastly, the possibility of choosing the correct (target) tower naturally is reduced to 25% because of the way they are constructed; hence it reduces the possibilities of the animal to use any strategy other than spatial learning to solve the maze. Thus, there is increased level of objectivity using the OFTM to assess spatial learning than in other mazes.

A limitation of the OFTM is that although it is designed to assess spatial learning in rodents, it has only been used to assess place- and response-learning in adult Sprague-Dawley rats. Thus, apart from extrapolations, nothing can be said about performance of mice or other strains of rat.

Like other mazes that measure aspects of learning and memory, the OFTM takes cognizance of the fact that subjects’ behavior in the maze is affected by many different processes. However, the OFTM has been specifically developed to test spatial learning in rodents without the experimenter having to consider the role of stress as a confounding variable (Lipatova et al., 2015).