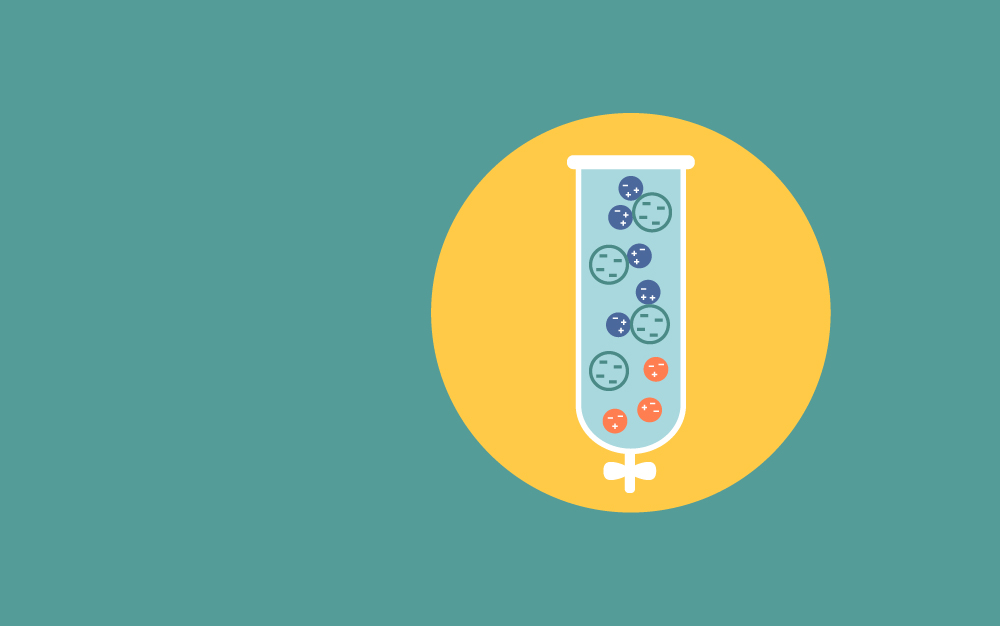 Ion Exchange Chromatography (IEC) is a powerful liquid chromatographic technique used for bioseparation. The separation is done by a reversible interaction between charged molecules of the sample with charged ligands attached to a column. The method offers a sizeable sample-handling capacity, powerful resolving ability, broad applicability, moderate cost, and ease of handling. These characteristics have made ion-exchange chromatography one of the most versatile and widely used liquid chromatography techniques. Ion exchange chromatography is frequently used for the separation and purification of polypeptides, proteins, enzymes, antibodies, nucleic acids, polynucleotides, and other charged biomolecules.

Ion-exchange chromatography separates the molecules based on their respective charged groups. The ion-exchange chromatography consists of both mobile and stationary phases, the former is usually an aqueous buffer system into which the sample of interest is introduced, and the latter is an inert organic matrix chemically derived with ionizable functional groups carrying an oppositely charged counterion. The molecules undergo electrostatic interactions with opposite charges present on the stationary phase matrix. For electroneutrality, these inert charges interact with exchangeable counterions in the solution. Ionizable molecules that are to be resolved to compete with these counterions for binding to the displaceable charges on the stationary phase. These molecules are retained or eluted according to their respective charges.

The ion-exchange chromatography consists of a series of mobile phase reservoirs containing a range of different mobile phases. The reservoirs are made of glass or plastic because the mobile phases can have extreme pH values. The components of the ion-chromatography system include pumps, conduits, valves, sampling devices, columns, and detector cells. The solvent reservoirs are attached with a solvent selection valve and a solvent programmer. The solvent then passes from the selector to a high-pressure pump. The mobile phase passes to the sampling device from the pump and relays onto the column. The exit flow from the column passes the solvent to the detector. The detector could be an electrical conductivity detector or the UV detector. The output from the detector sensor is electronically modified and presents the ion concentration on the computer.

Analysis of the components of a Clostridium difficile vaccine (Rustandi. et al., 2016)

The ion-exchange chromatography was used to characterize the charged variant heterogeneities and to monitor the stability of antigenic components of the Clostridium difficile vaccine. In the study, a novel tetravalent C. difficile vaccine containing all four toxins was developed from an insect cell expression system. Clostridium difficile is the leading pathogen causing nosocomial diarrhea. The main virulence factors are two large glucosyltransferase proteins, toxin A (TcdA) and toxin B (TcdB). These factors are considered to be the primary factors responsible for the symptoms of the infection. The ion-exchange chromatography is a powerful separation technique for the characterization and analysis of protein antigenic components.

The ion-exchange chromatography was used for quantitative recoveries of tryptophan on an automatic analyzer. The proteins were hydrolyzed at 110o or 135o in NaOH containing 25 mg of starch. In the study, n-tryptophan was chromatographed on PA-35 resin and yielded values for carbon, hydrogen, and nitrogen within 1.0% of the calculated values. Integral values were obtained for the tryptophan residues in tryptophyl-leucine, porcine pepsin, human serum albumin, sperm whale apomyoglobin, trypsin, bovine a-chymotrypsin, deoxyribonuclease, and serum albumin. The method is advantageous for the measurement of tryptophan in the same hydrolysate used for the determination of the other amino acids. The ion-exchange chromatography could be efficiently used for the determination of amino acid content in hydrolysates.

Ion-exchange chromatography is widely used for the detailed characterization of therapeutic compounds and their derivatives. It can be considered for the qualitative and quantitative assessment of charge heterogeneity of the pharmaceutical agents. The technique has been used for the evaluation of monoclonal antibodies (Mabs), antibody drug conjugates (ADCs), polypeptides, proteins, nucleotides, and nucleic acid conjugates. The ion-exchange chromatography has been employed to separate a wide array of therapeutic agents including C-terminal lysine variants/truncation, deamidated forms, glycoforms, and sialic acid variants. In addition, it also isolates the products of the PEGylation reaction based on the degree of conjugation and the isomeric forms of PEGylated proteins. The method is a promising separation and characterization tool for the analysis of biotherapeutics.