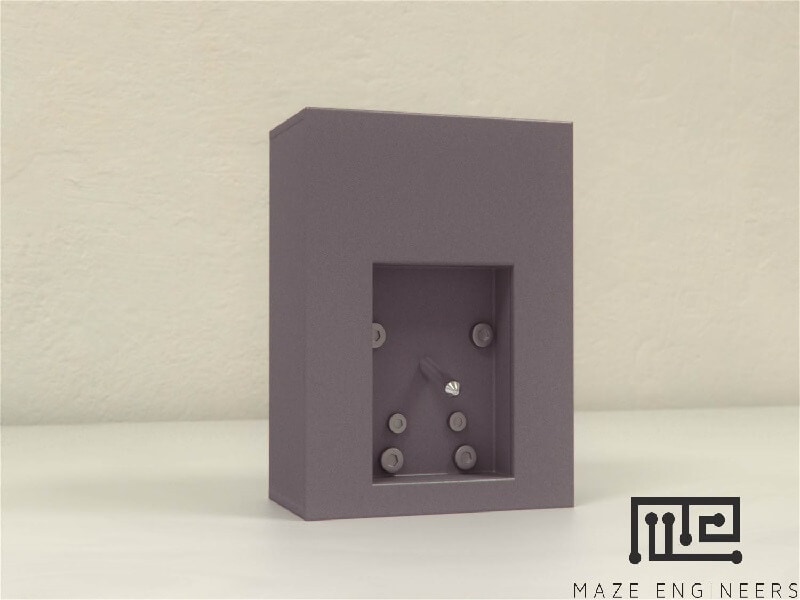 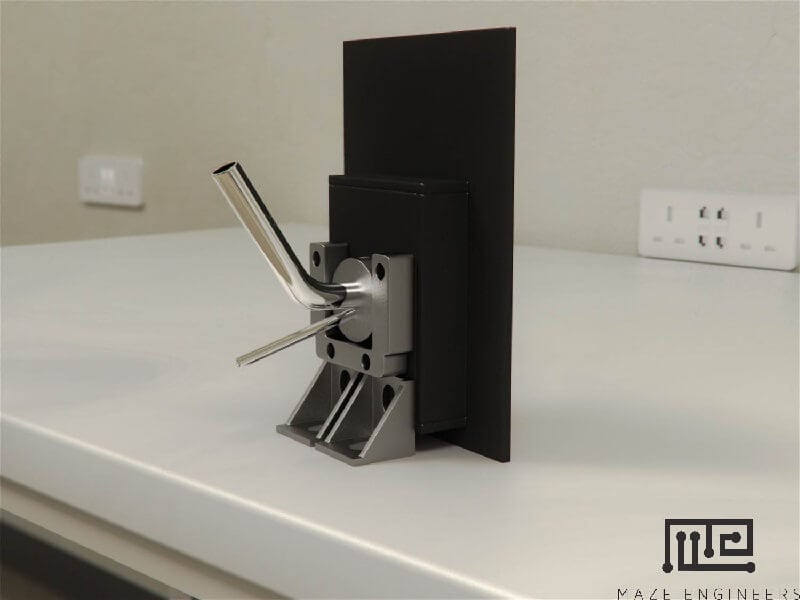 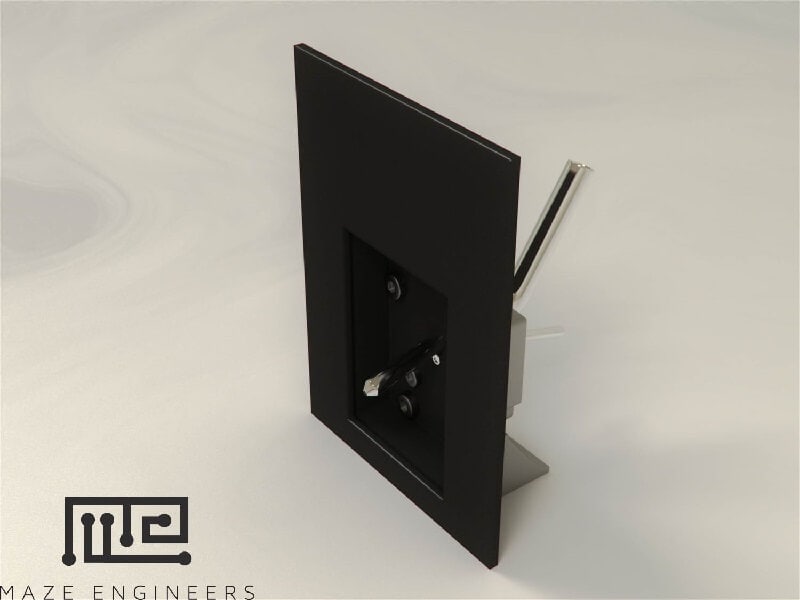 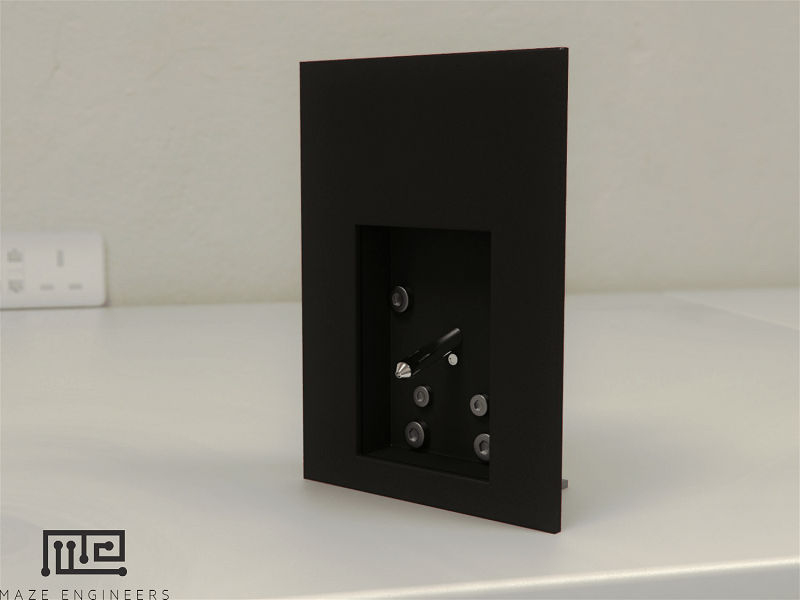 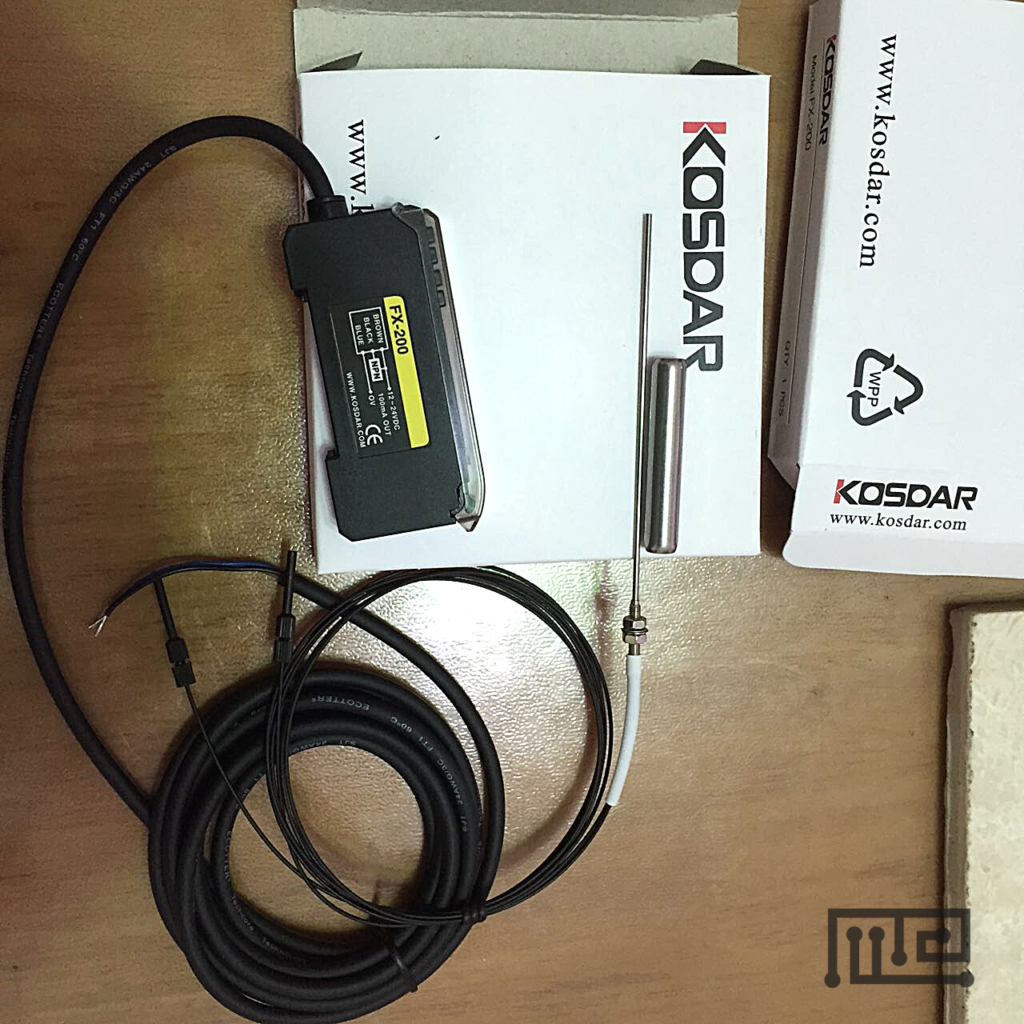 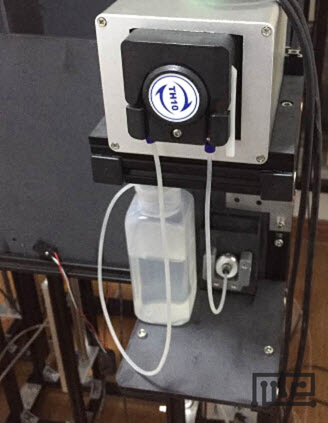 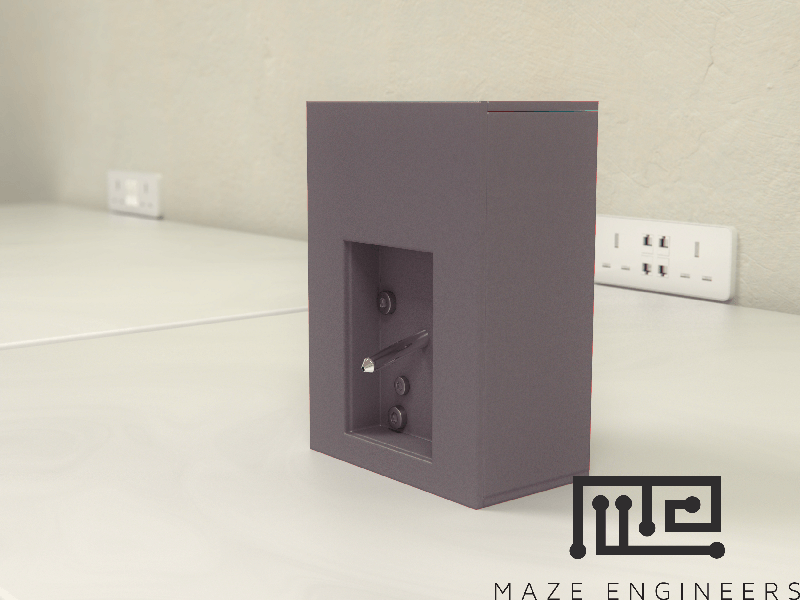 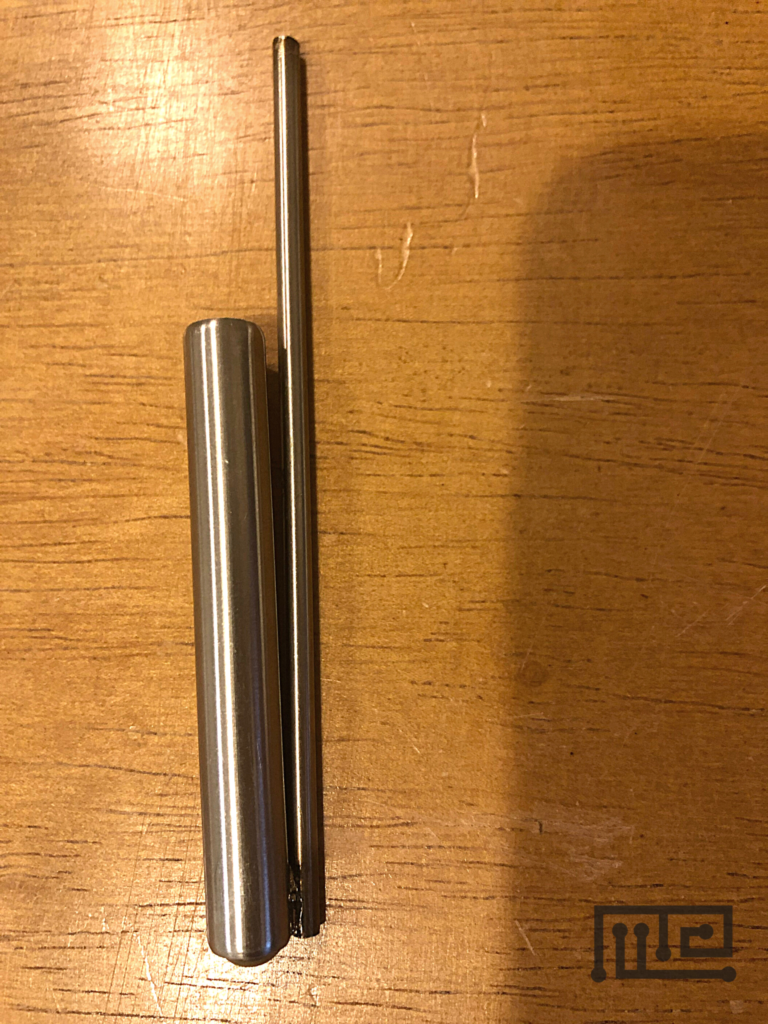 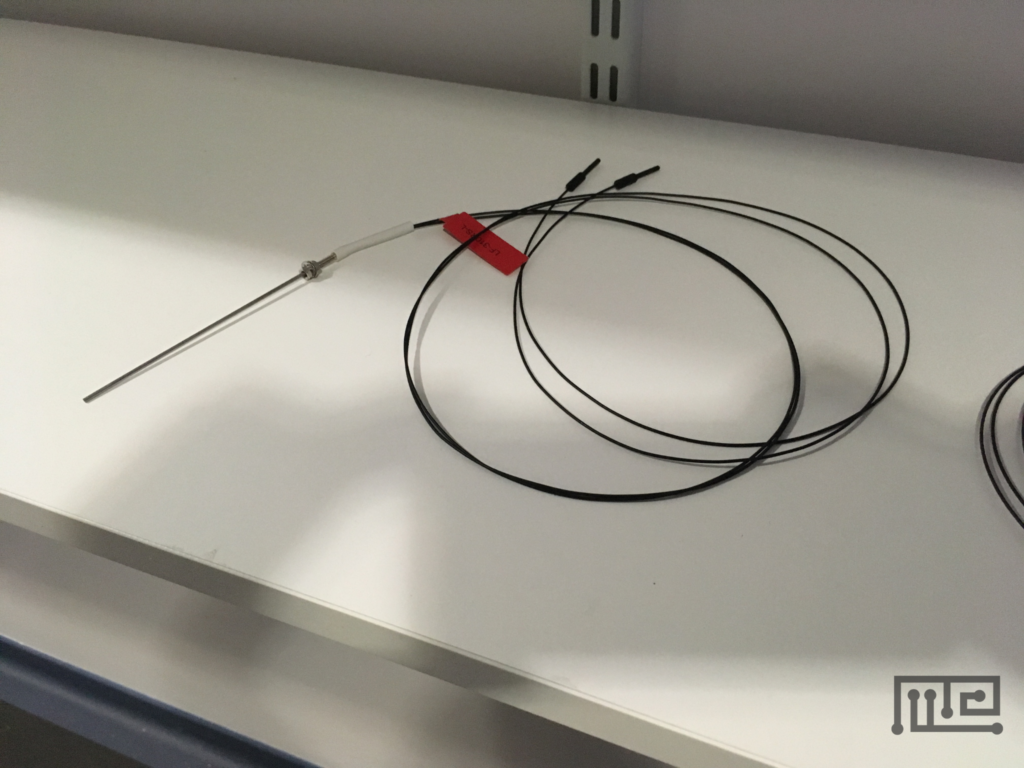 The Maze Engineer’s automated Lickometers utilize precise optical detection to measure licks with a water or sucrose reward. The adjustable lick port can move up, down, left, and right and lock into place at any point. Acrylic boxes, containers, and lids are built customized to your needs when you order.

Our ConductMaze software allows for OpenAPI access, allowing for quick and easy modifications and plugin creation to infinitely add to any maze.

Easily customizable: Can be combined with any maze for brand new activity protocols and unique habitat enclosures. Many colors, sizes, and even multiple configurations of lickometers are available.

Maze Engineers lickometers are a precision engineered apparatus with customization in mind. When you order, we create customized enclosures around the lickometers including color & size. The default lickometer is adjustable in height and location so that you can change between trial runs. We can put these lickometers into any sort of other mazes, thus creating entirely unique environmental enrichment chambers. You can create extraordinarily unique experiments with this capability, so let your creativity fly!

Lickometers Embedded within a T maze

Lickometers are used to study ingestive behaviors of rodents to analyze reward-based behaviors and metabolism. They can also be used to determine the circadian cycle and investigate the effect of pharmacological or genetic manipulations on circadian biology.

Lickometers record the licking behaviors of rodents from a licking spout. They utilize optical detection to deliver sucrose or liquid reward once the subject licks the spout. Utilizing a sucrose reward can also be used to study anhedonia in rodent models of depression and drug withdrawal. Lickometers can also be used to study preference behaviors towards different liquids in rodents by comparing the number of licks the subject makes between the liquids. Furthermore, the dose-related behavioral effects of acute or chronic drug treatments can also be rated by analyzing rodents licking activity (Godynyuk, Bluitt, Tooley,  Kravitz, & Creed, 2019)

MazeEngineers offers automated lickometers in which the lick ports are adjustable and can move up, down, left, and right and lock into place at any point. Customizable acrylic boxes, containers, and lids can be ordered according to your needs. The lickometers can be combined with any maze for various experimental protocols. Furthermore, the color and size of the lickometers are also customizable, and they’re available in multiple configurations.

The lickometer is an automated device that utilizes optical detection to deliver sucrose or water reward. It is customizable and adjustable. The lick ports can be moved up, down, left, and right. The color and size can be customized.

The lickometer is available with ConductMaze software, which enables OpenAPI access that allows quick and easy modifications and plugin creation, which can be added to any maze.

The protocol can include delays in reward presentation or the delivery of the reward after a light is illuminated or a tone is presented to measure how these variables can influence liquid consumption.

Weatherly, Nurnberger, and Hanson (2005) investigated negative anticipatory contrast, which involves the decrease in consumption of a low-valued substance in the presence of a high-valued substance in Sprague-Dawley rats. Additionally, positive induction was also investigated, which involves the potential increase of low-value reinforcer responses if responding to a high-value reinforcer is possible. The factors that contributed to these behaviors were investigated, including auditory cues, temporal delays, location of substance delivery, and food reward. A couple of lickometers were placed in the subject’s home cage, which were used to deliver the sucrose reward of various concentrations. The lickometers could measure 10 licks. Three colored stimulus lights, of 0.6 cm in diameter each, were placed five centimeters above each lickometer. Yellow light was placed in the center, and red and green lights were placed on the left and right sides. The lights were used to indicate the presence of the sucrose reward. Temporal and auditory cues were manipulated by delaying the reward and sounding a tone during the presentation of the reward. Furthermore, trials involving separate locations to deliver the rewards were conducted by employing two separate spouts for reward delivery. The results indicated that temporal delays and auditory cues had no significant effect on whether the subjects’ consumption of 1% sucrose either increased or decreased when the consumption of 32% sucrose was near. Deprivation of sucrose promoted induction. Whether contrast or induction occurred also depended on whether consumption occurred from one spout in one location (induction) or two different spouts in two different locations (contrast).

Investigation of meal and drinking bouts in rodents

Smith (2000) investigated rats’ intake of food (Purina Chow), saccharin, and sucrose over 24 hours to analyze preferences using a lickometer. Two drinking spouts could be placed on the lickometer. Eight adult male albino rats of around 130 days were used in the study. The baseline condition of food and water (without any sweetener) ingestion patterns were first investigated for two days. After baseline, a second bottle was added to the subjects’ home cages, which contained sweeteners of various concentrations (either sucrose or saccharin) for two days. The number of bouts, duration of bouts, rate of licking during bouts, the day and night intake patterns, and the juxtaposition of eating and drinking of the subjects was analyzed. The results revealed that water intake was zero when the lowest sucrose solution of 0.03 M was introduced to the home cage. Sucrose intake increased up to 0.25 M and then decreased at 0.5 M and 1.0 M presentations. Food intake also decreased as sucrose intake increased. Sucrose bouts decreased at concentrations up to 0.06 M but increased when concentrations went from 0.06 M to 0.5 M. Increased sucrose concentrations also caused juxtaposition of eating with drinking changes. Different results were observed when saccharin was introduced into the cage. Saccharin intake peaked at about 8 mM but was almost completely rejected by the subjects at 66mM. All saccharin concentrations demonstrated steady food intake. Moreover, food bout length and duration were steady at all concentrations. Increased saccharin concentration caused a gradual increase in saccharin bouts.

The following parameters can be observed using the Lickometer:

The Lickometer is an automated device that utilizes optical detection to detect and record how many licks rodents make within a given time limit. These licks are used to analyze ingestive behaviors in rodents, which can be used to study reward-based behaviors, metabolism, circadian biology, preference behaviors, and anhedonia. Conduct science offers lickometers that can be customized according to your experimental needs. Reinforcement behaviors can also be analyzed by customizing the Lickometer and equipping it with an aversive stimulus such that a shock is delivered through the licking spout when the subject licks it. Moreover, reinforcers in the form of food deprivation or delayed reward delivery can also be administered.