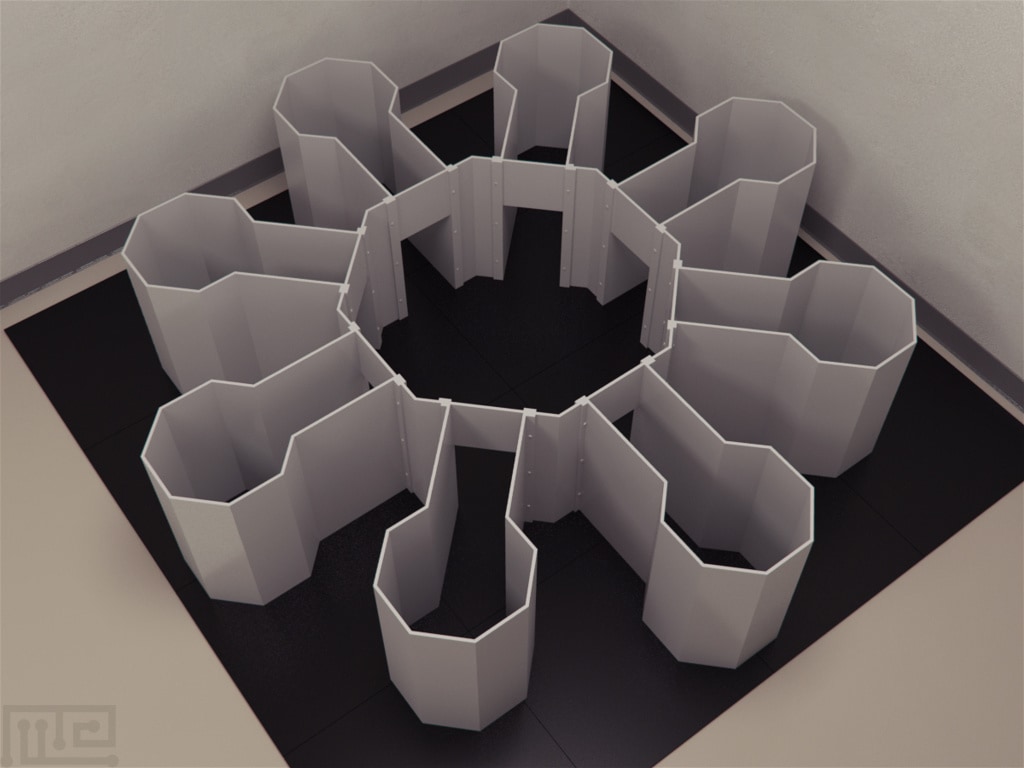 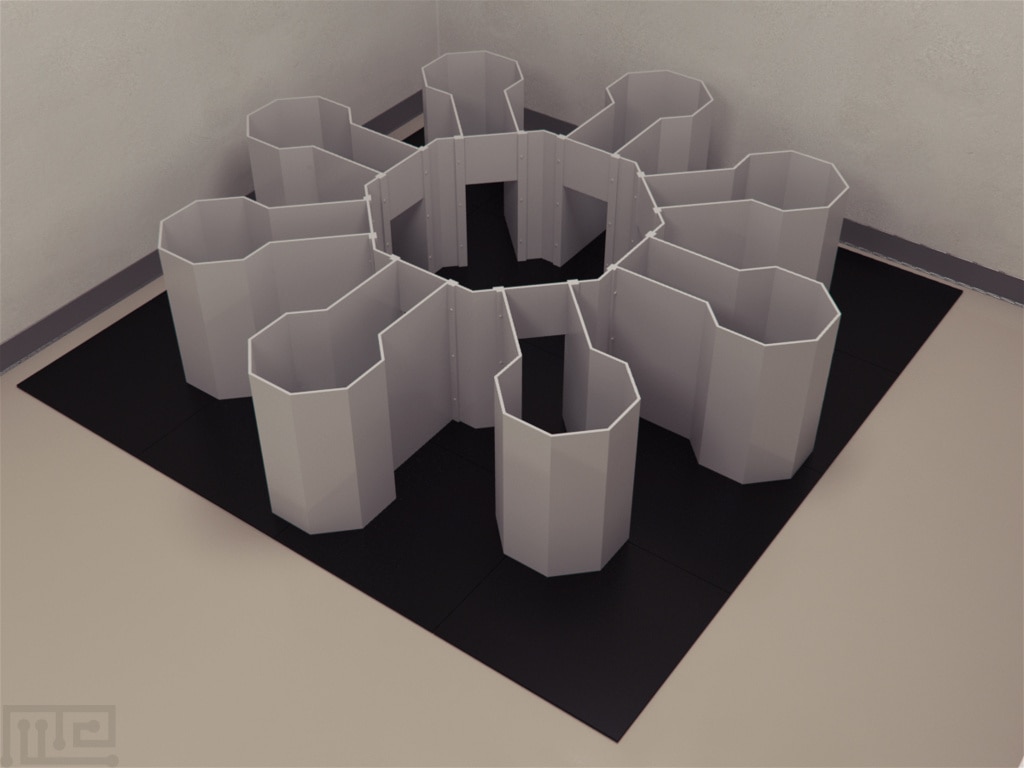 Pig are an important tool in the research for TBI given their similarity to humans and the 8 arm radial maze is used widely in learning and memory. This maze is based on specifications by Dilger et al (2010) as the first described use in piglets at 2 weeks of age. They are trained for a milk reward in 8 PVC bowls with covered lids (included in your order). Intramaze cues are placed with surrounding curtains, and piglets have demonstrated the ability to learn the simple associative acquisition task.

The pig radial arm maze is different from the rodent radial arm as it is adapted to work with non-spatial tasks as well (Digler et al., 2010).

Due to the similarities between human and porcine neuroanatomy, pigs are a desirable subject to use in neuroscience experiments. Compared to rodents, pigs show much closer cognitive abilities to humans (Gieling et al., 2011).  In particular, the similarities can be seen in the neural growth patterns of neonatal piglets and human infants. Furthermore, neonatal piglets are easy to wean and do not suffer from separation anxiety from their mothers. They can also be artificially reared and trained using a reward based system. All these factors make piglets an ideal subject to carry out learning and memory tasks. These tasks require the proper functioning of the hippocampus. However, many cytokine receptors reside in the hippocampus, making it particularly sensitive to excess production of central pro-inflammatory cytokines. These pro-inflammatory cytokines can adversely affect the hippocampus and can reduce the learning and memory capacity of this structure. This is of particular concern when brain growth is not yet complete as it could lead to potentially significant deficiencies in the ability to process and retain information effectively. (Digler, et al., 2010)

An excellent apparatus to carry out behavioral tasks which measure learning and memory is the pig 8 arm radial maze. The 8 arm design allows for the formation of several variations according to bait (in this case, milk) being placed alternatively in front of different arms. The visual cue used is different colored curtains placed in front of the arm. The piglets need to learn which color corresponds to the accessible milk and use this information in future tasks. The pig radial arm is different from the rodent radial arm as it is adapted to work with non-spatial tasks as well. (Digler, et al., 2010)

The activity of the subjects is recorded via a video camera mounted to the ceiling directly above the central octagonal area. Prior to testing, the subjects are fed a nutritionally complete, medicated commercial piglet milk which is automatically delivered using a digital timer to mimic natural feeding patterns. The piglets are given milk every hour for 14 hours and then no milk for 10 hours. Behavioral assessment is conducted during the period of starvation so that hunger serves as a motivator. Additionally, a bowl of milk is placed behind the curtain in every arm to prevent the smell from becoming a cue. However, the bowl placed behind incorrect arms is covered, and only the bowl behind the correct arm is accessible to the subjects to serve as motivation and to help with the learning process. (Digler, et al., 2010)

Arm 2 serves as the starting location for the subjects when carrying out the behavioral assay. The subjects are assessed for 8 days and are assigned two tasks: acquisition and reversal. Each task is carried out over a period of 4 consecutive days with 8 trials occurring every day. In the acquisition task, the single correct arm is shielded by a blue curtain, whereas the other 7 incorrect arms are shielded by white curtains. After the completion of the acquisition task, the reversal task takes place. In this task, the color pattern is reversed, with the incorrect arms being covered by blue curtains and the correct arm being covered by a white curtain.

If the subjects are unable to complete a task in the allotted time they are gently guided to find the milk reward in the correct arm as a shaping procedure. This shaping, however, is only restricted to the acquisition phase and the maximal trial time (60s) is recorded for these subjects.

In each testing day, each of the 8 arms serves as the correct arm only once. The arm order is randomized between the days of testing but remained the same within one day of testing. Even though arm 2 is designated as the permanent starting arm, it is also part of the rotation of being the correct arm on any given day. (Digler, et al., 2010)

A few subjects served as a control and are taken from separate litters and are reared according to the same pattern described above. However, they are not given any experimental treatments to assess their response to the behavioral assessment. (Digler, et al., 2010)

After the acquisition phase, the subjects are divided into two experimental groups on the basis of weight, gender, and the litter of origin. The subjects are then injected i.p with either sterile saline or poly I:C. After 3 hours post injection, the subjects then take part in the reversal testing.

Following the 8-day behavioral assessment, the control subjects are randomly assorted into two treatment groups and are given i.p injections of either sterile saline or poly I:C. Four hours after the injection, the subjects are anesthetized and are then sacrificed. Blood and tissue sampling occurs right after sacrifice. (Digler, et al., 2010)

Total RNA is isolated from the tissue samples. The total RNA concentration is quantified using spectrophotometry, and the purified samples are then subjected to a DNAse I digestion procedure, followed by being reverse transcribed to cDNA.

Quantitative RT-PCR is performed in which the sample cDNA and reference cDNA is amplified via PCR. (Digler, et al., 2010)

Determination of plasma concentrations of cytokine is done using porcine-specific antibodies in enzyme immunoassays. This allows the evaluation of which cytokines become elevated and can cause possible disruption to the learning tasks. (Digler, et al., 2010)

Several variables and parameters are recorded to carry out the data analyses:

The behavioral data is presented as daily averages for each variable. (Digler, et al., 2010)

The piglet has similar neural biochemistry to human infants, making it an ideal candidate for carrying out experiments. Furthermore, piglets can be weaned soon after birth and do not experience the same separation anxiety that rodents do. (Digler et al., 2010)

The radial arm allowed the employment of paradigms that called for active response inhibition. This made it possible to detect even the smallest disruption of hippocampal activity. (Digler, et al., 2010)

Furthermore, the experiment is unable to detect sexually dimorphic effects of the cytokines. (Digler, et al., 2010)