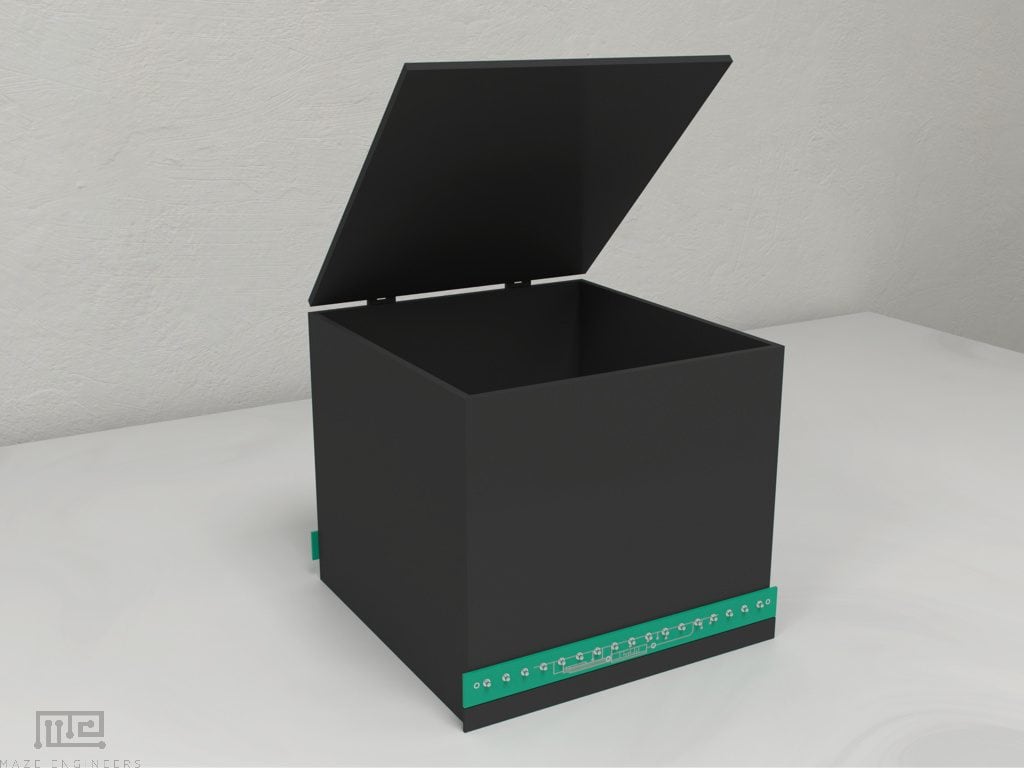 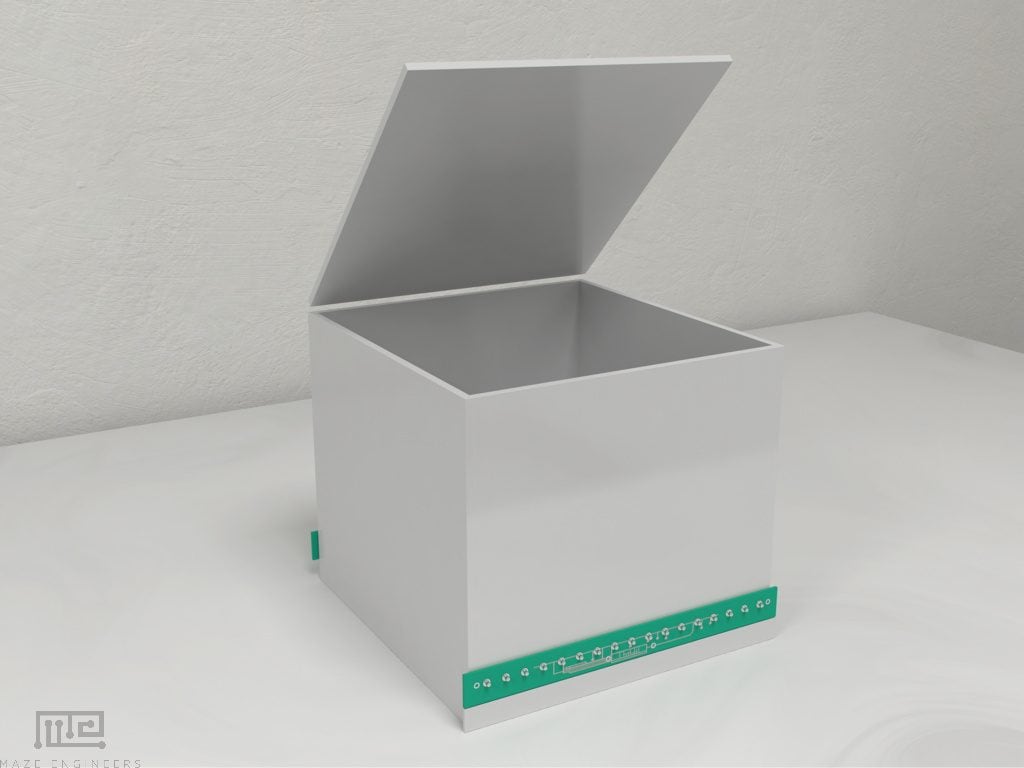 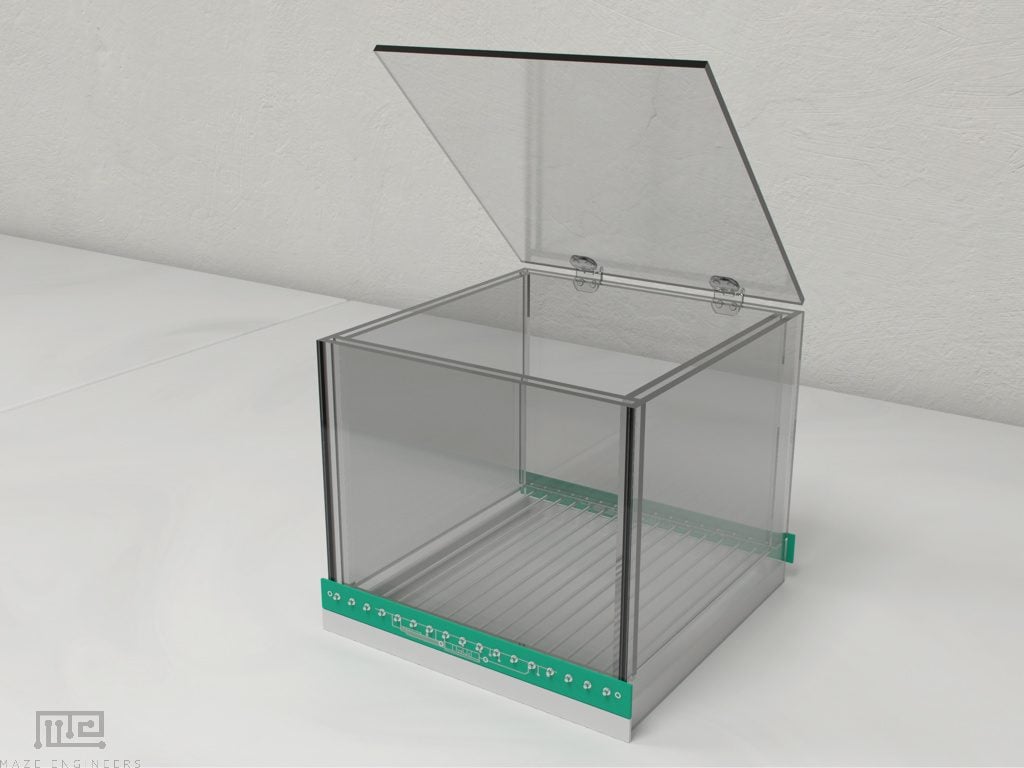 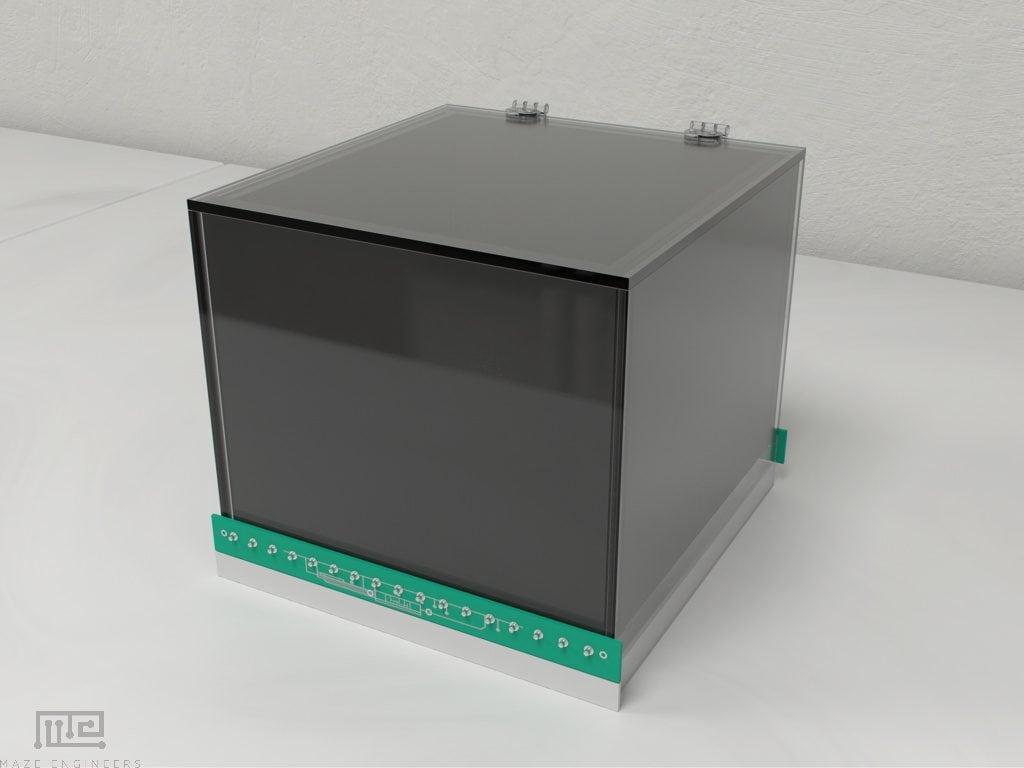 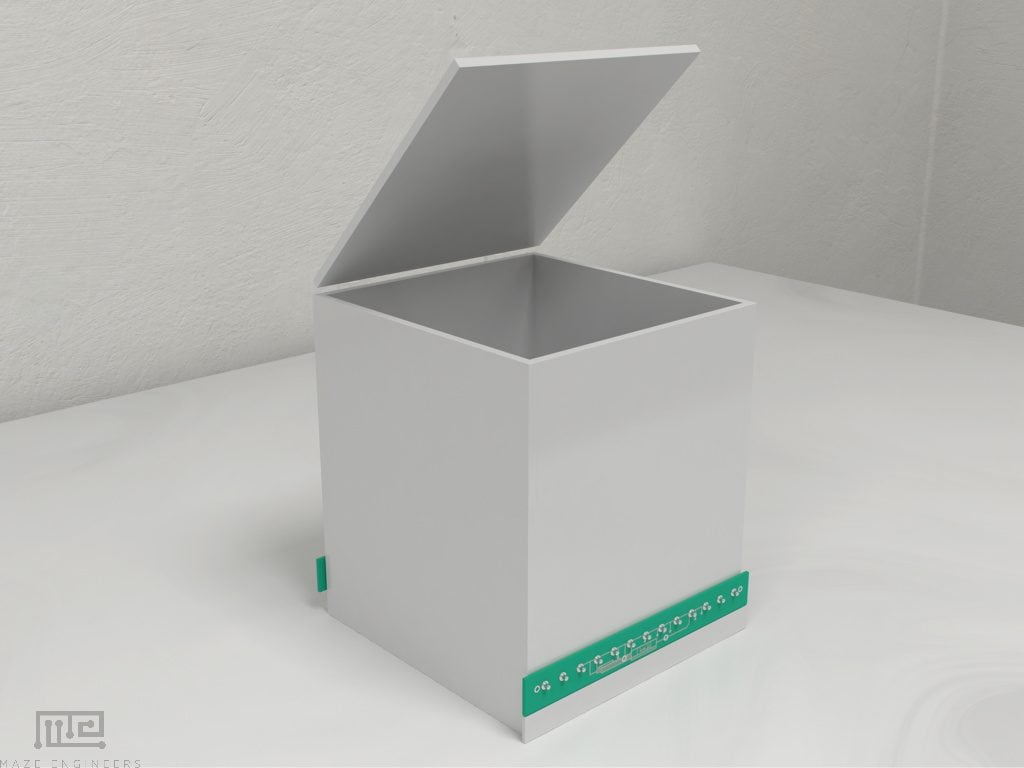 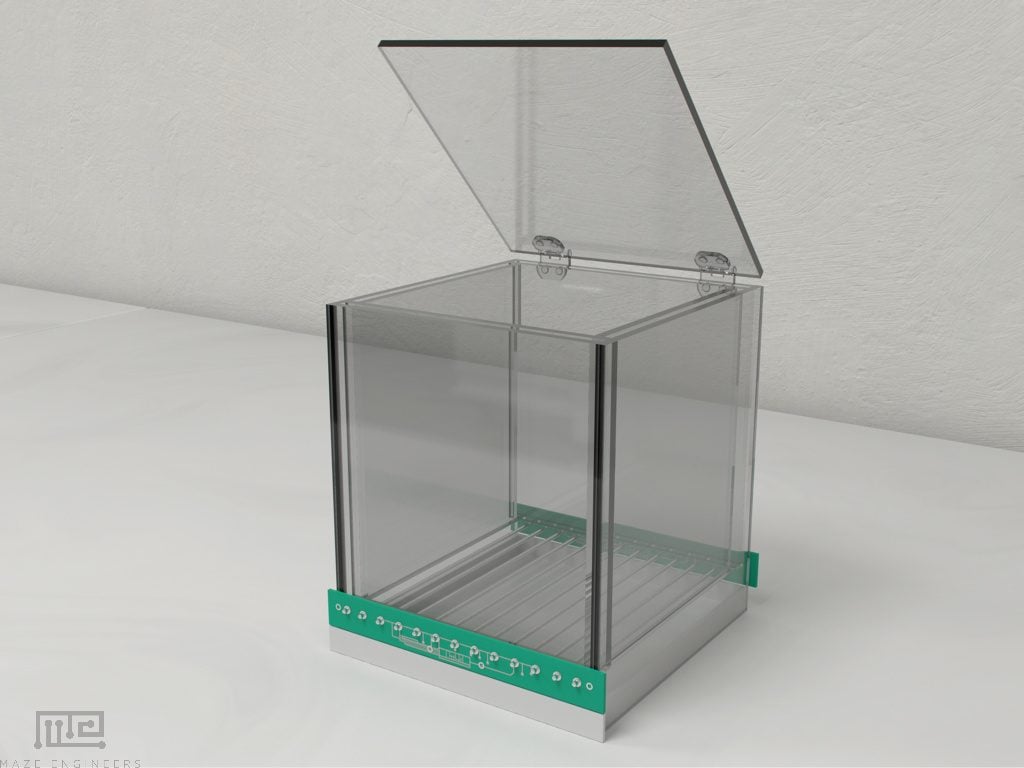 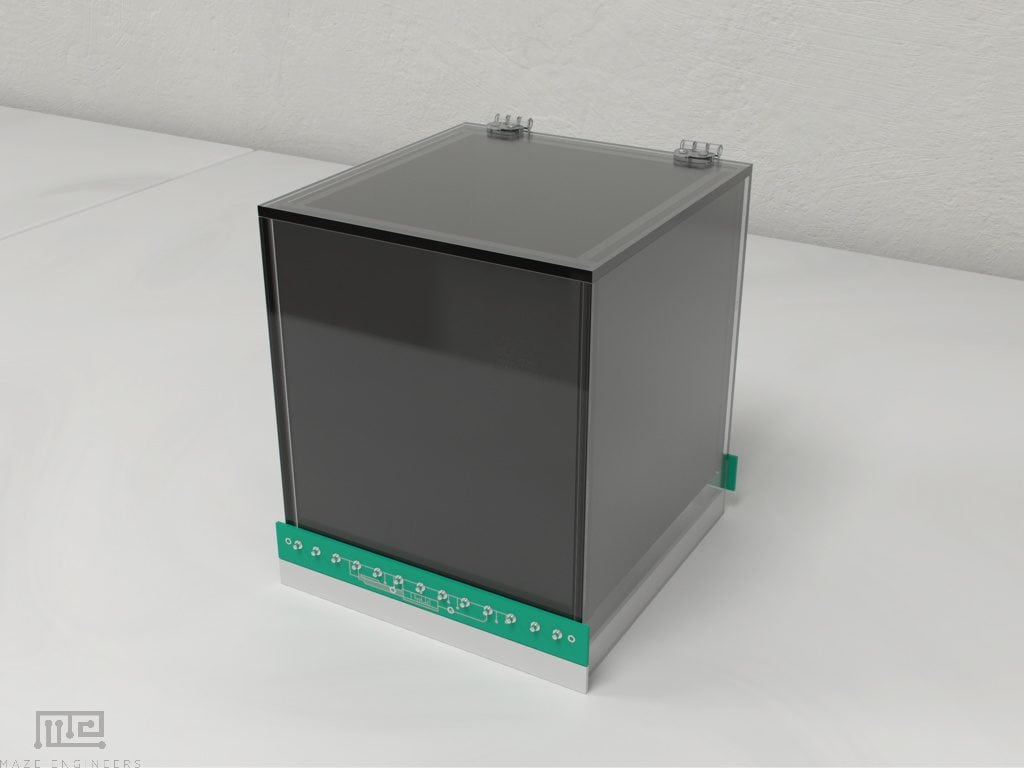 The learned helplessness paradigm is a widely used animal model of depression originally described by Overmier and Seligman (1967), who observed that exposure to inescapable shock resulted in dramatic deficits in emotional expression, associative learning, and behavioral coping when presented to an aversive but escapable stimulus. The MazeEngineers learned helplessness apparatus is designed to maximize your time and grant dollars for data output. The device can be configured with multiple shock configurations and also flexible contextual cues means the use of operant conditioning in the learned helplessness experiments. Integration with Conductor means Neuralynx and Ethovision seamless software integration without I/O boxes.

The learned helplessness paradigm is a widely used animal model of depression, originally described by Overmier and Seligman (1967), who observed that exposure to inescapable shock resulted in dramatic deficits in emotional expression, associative learning and behavioral coping when presented to an aversive but escapable stimulus. This model has been optimized for mice and rats (Vollmayr and Henn, 2001, Chourbaji et al., 2005) and elicits helpless behavior only in some animals to account for different predisposition for depression in different subjects. Animals that develop learned helplessness show symptoms associated with depression, including reduced body weight and sexual behavior, altered rapid eye movement sleep, and increased levels of corticotrophin-releasing factor and corticosterone (Yan et al., 2010), but also increased fear conditioning and aggression, gastric ulcers and opiate-mediated analgesia (reviewed by Vollmayr and Gass, 2013).

This model has been pharmacologically validated with anti-depressants, which are able to reduce latency to escape and number of animals that show helpless behavior (Sherman et al., 1982, Chourbaji et al., 2005). These effects suggest that the learned helplessness paradigm offers predictive validity as a model of anti-depressants action.

Randomized mild shocks are applied to the animal´s tail or foot in a conditioning chamber. Floor is usually made of steel rods to conduct the electrical shock. Tone or signal light may serve as unconditioned stimulus before shock application.

Investigators typically analyze number of escape (or termination) failures and latency to escape or terminate the trial, which are markers of depression (Yin et al., 2016). In addition, active avoidance (exit or termination during shock) and passive avoidance responses should also be measured.

The equipment required to perform the learned helplessness model primarily entails a shock generator and a conditioning chamber with a floor with steel rods to conduct the electric shock.

Dimensions of the conditioning chamber can be adjusted depending on species and size/weight of the animals. For rats, Vollmayr and Henn (2001) used conditioning chambers with inside dimensions of 25 X 30 X 21.5 cm (small) or 48.5 X 30 X 21.5 cm (large). For mice, Chourbaji (2005) used two 18 X 18 X 30 cm3 compartments in two-way avoidance protocol (please see Modifications).

Walls can be made of steel to minimize shock avoidance or plexiglas (Vollmayr and Henn, 2001, Chourbaji et al., 2005). If using steel, the investigator should consider having one wall made of Plexiglas with an overlying electrified grid to facilitate observation.

Infrared-light beams can be installed at the bottom of the chamber to monitor spontaneous shuttling in response to light (conditioned response) and behavioral responses elicited by electric shock (unconditioned) (Chourbaji et al., 2005).

Reliable shock application is essential and has to be controlled vigorously. Learned helplessness is induced by delivering inescapable electric shocks on the foot (Chourbaji et al., 2005) or tail (Drugan et al., 1997). The escape response should be species-specific, aiming for tasks of medium difficulty to avoid inducing helplessness in too few or too many animals.

The investigator should avoid picking up the animals by the tail when transferring them to the conditioning chamber. All procedures should be consistent across different experimental groups. Light in the experimental room should be reduced to a minimum. Diverse experimental protocols have been reported. Chourbaji et al. (2005) performed shock procedure in mice on two consecutive days, with each session lasting approximately 52 min. The shock procedure comprised 360 randomized footshocks (0.150 mA, 1-3 s, intervals of 1-15 s) on two consecutive days. Conversely, Vollmayr and Henn (2001) performed one 40 min session (0.8 mA, total shock duration of 20 mins, 5-15 s intervals). On the other hand, Yin et al. (2016) recommend an induction phase of 60 trials.

Animals should be observed during shock procedure. Resistance due to fur, fecal bolus between rods and posture/specificity of the animal´s contact with the rods – sitting on rods with the same potential, having the forepaws on not electrified walls or placing the paws between rods (Vollmayr and Henn, 2001) – may compromise efficient shock application. After each session, the chamber should be cleaned with 70% ethanol and animals should be transferred back to home cage.

Assessment of learned helplessness usually starts 24 hr after shock procedure to allow memory consolidation. Number of test days and duration of sessions can be adjusted. Using rats, Vollmayr and Henn (2001) applied 15 shocks with 60 sec each and intervals of 24 sec (phase duration of 200 ms and intensity of 0.8 mA). Chourbaji et al. (2005) used an initial light stimulus of 5 sec to announce a subsequent 10 sec maximum shock (inter-trial interval of 30 sec). Conversely, Yin et al. (2016) recommend ~3 sec trials, with trial cycle repeated 30 times/day for 3 days. Session duration can be adjusted depending on the animal´s ability to learn the paradigm.

After each session, the chamber should be cleaned as described above and animals should be placed back in their home cage.

Several adaptations have been reported regarding the learned helplessness protocol, which include intensity and duration of electric shocks, numbers of sessions and trials, length of intervals, and use of conditioned and unconditioned stimulus during the test phase (reviewed by Yin et al., 2016).

Vollmayr and Henn (2001) used an experimental setup in which rats could terminate the shock on testing days by pressing a lever placed inside the chamber. The scientists also used a white signal light (12W) above the lever to guide the animals. Conversely, Chourbaji et al. (2005) used a second chamber to enable mice to escape the shock.

Control animals will immediately terminate the trial (rat) or escape (mouse) when subjected to mild shocks. In contrast, helpless animals will not terminate the trial but rather accept the uncontrollable stressor. Vollmayr and Henn (2001) categorized learned helplessness as a minimum of 10 failures to terminate the shock, whereas less than five failures is defined as “not learned helplessness”. In each test day, number of termination failures and latency to terminate the trial after application of shock are measured. These categories are used as markers of depression (Vollmayr and Henn, 2001, Chourbaji et al., 2005, Yin et al., 2016). In addition, active avoidance (termination during shock) and passive avoidance responses (accounting for anticipation of stressor) are scored and used as markers of locomotor activity and instrumental learning, respectively (Yin et al., 2016).

To eliminate variability in pain sensitivity as a potential confounding factor, hotplate test can be performed (Chourbaji et al., 2005).

Number of failures (A) and escape latency (B and C) are the typical results when performing the learned helplessness model. Data can be shown as group averages (A and B) or by sorting each group in intervals of latency/number of failures (C). In addition, graphs can also show variation of responses across test days (B). The following graphs show two sample groups – one control and one group subjected to inescapable stress (IS). Results in A and B are mean ± standard error of the mean:

The learned helplessness model of depression has been consistently validated with antidepressants and shows a variety of behaviors and symptoms associated with major depression. Furthermore, the reduction of depressive-like symptoms is specific to anti-depressants, as administration of anxiolytics fails to elicit the same effects. (Yin et al., 2016) Therefore, this model is a powerful tool to understand the depressive symptomatology in humans.

The learned helplessness model has presented a significant challenge in establishing a comprehensive protocol and overcoming issues with lack of reliability across different laboratories (Musty et al., 1990, Yan et al., 2010). However, recent studies have been a major contribution in this regard (Vollmayr and Henn, 2001, Chourbaji et al., 2005). Another important limitation is that the symptoms associated with depression do not persist long enough following termination of the inescapable shock (Cryan et al., 2002). Nevertheless, compared to the forced-swim test, when testing most anti-depressants, multiple administrations are needed to reverse the symptoms (Takamori et al., 2001). In addition, inter-strain variability has been reported (Yan et al., 2010).

Musty RE, Jordan MP, Lenox RH (1990) Criterion for learned helplessness in the rat: a redefinition. Pharmacology, biochemistry, and behavior 36:739-744.

Okamoto H, Agetsuma M, Aizawa H (2012) Genetic dissection of the zebrafish habenula, a possible switching board for selection of behavioral strategy to cope with fear and anxiety. Developmental neurobiology 72:386-394.

Overmier JB, Seligman ME (1967) Effects of inescapable shock upon subsequent escape and avoidance responding. Journal of comparative and physiological psychology 63:28-33.