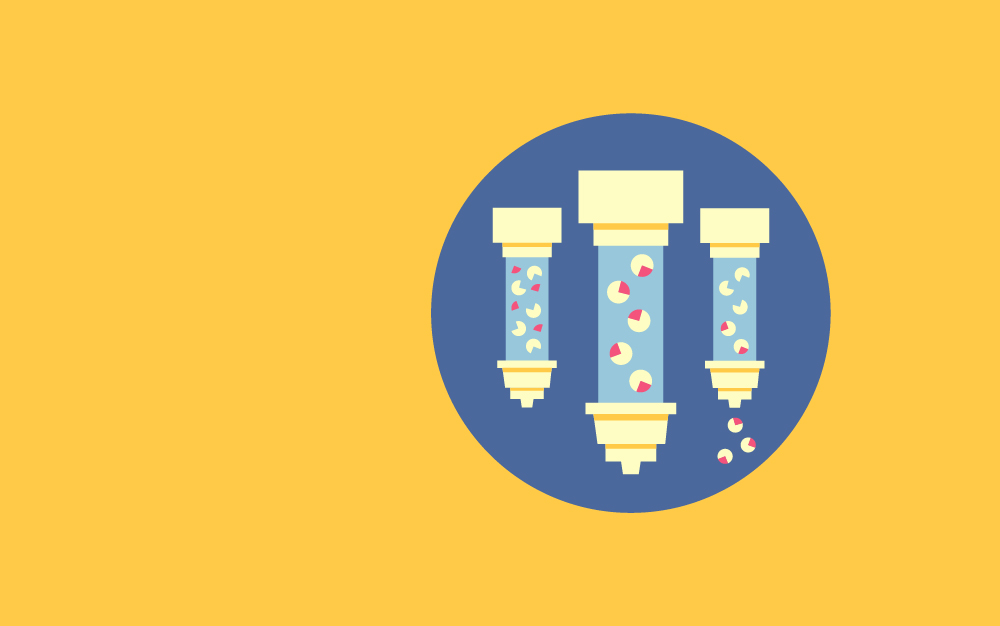 Affinity chromatography is a versatile separation protocol that uses the biological interactions for characterization and detailed analysis of sample components. It is based on highly specific interactions between two molecules, such as the interactions between enzyme and its substrate, receptor, and ligand, or antibody and antigen. These reversible interactions are used for the purification by placing one of the interacting molecules, considered as affinity ligand, onto a matrix to make a stationary phase while the target molecule is run through the mobile phase. Highly selective nature of the method enables a fast, single-step purification of the sample components from several hundred to thousand-fold. Other applications of the technique include the study of drug or hormone interactions with the binding proteins, the ability to concentrate substances present at low concentration and to separate the proteins based on their biological function. The development of the affinity liquid chromatography has enabled the biomedical researchers to explore and investigate protein-protein interactions, post-translational modifications, and protein degradation.

The stationary phase of the affinity chromatography consists of a support medium (e.g., cellulose beads) on which the substrate is attached covalently to expose the reactive groups essential for enzyme binding. As the crude protein mixture is passed through the chromatography column, proteins with a binding site for the immobilized substrate bind to the stationary phase, while all the other components of the sample are eluted in the void volume of the column.

The affinity chromatography matrix is made of porous support materials such as agarose, polyacrylamide, polymethacrylate, cellulose, and silica. The matrix should be selected on the basis of physical and chemical properties. Spacer arms could also be incorporated between the matrix and the ligand for efficient binding and better binding environment. Ligands for the affinity chromatography are selected depending on the molecules to be separated. The ligands can be covalently immobilized or adsorbed on a surface via bio-interactions, entrapped within a pore, or conjugated with a metal ion. The isolated components can be taken for analysis from the derived elute.

Assess the purity of the protein fractions using the SDS-PAGE followed by silver staining to visualize the protein.

The affinity chromatography is a powerful separation technique that is based on unique interaction between the target molecules and a ligand coupled covalently to a resin. It provides the target molecule in a reasonably pure state and enables its identification by partial sequencing, either by N-terminal microsequencing or by mass spectrometry. The biological activity of the purified proteins is retained in most cases allowing the assessment of their function. The method has been successfully applied to purify the receptors for IL-6, IL-1β, IL-2, IL-4, IFN-γ, TNF-α, IFN- α/β, IL-13, IL-18, IL-22, and IL-33. The ligand affinity chromatography enabled rapid and efficient isolation of seven soluble receptors corresponding to the cell-associated receptors. It is a rapid, simple, selective, and efficient purification procedure for proteins to yield thousand-fold purification in a single step.

Enzymatic reactions are regulated and controlled by conformational changes of the involved proteins and enzymes. Specific movements of side chains, secondary structures, or protein domains facilitate the regulation of substrate selection, binding, and catalysis. The study was conducted to assess the structural effects of engineered ionizable residues in glutathione-S-transferase to convert it into a pH-dependent allosteric protein. In the charged state, the residues invoke unfavorable interactions, which induce conformational changes affecting the function of the enzyme. To test this, the researchers engineered a single aspartate, cysteine, or histidine residue at a distance from the active site of the enzyme. To evaluate the pH-dependent behavior of the mutant proteins binding the glutathione, the mutants were subjected to GSH-affinity chromatography. It was found that these mutations exhibit a strong effect on the protein’s affinity to bind the glutathione. Whereas, the aspartate or histidine mutations lead to permanent nonbinding or binding versions of the protein, respectively. The crystal structures of the mutant protein GST50C under ionizing and nonionizing conditions showed that the water molecules are recruited into the hydrophobic core to produce conformational changes influencing the protein’s active site. The affinity chromatography is an indispensable technique to understand the intimate relationship between the structure and dynamics of the enzymatic reactions.

Recombinant molecules extracted from plants are potential biotherapeutics that could be used to cure several medical conditions. In the study, histamine (HIM), phenylamine (PHEM), tryptamine (TRM), and tyramine (TYRM) coupled to Sepharose CL-4B via a 1,4-butanediol diglycidyl ether spacer was used to purify human monoclonal anti-HIV antibody 2F5 (mAb 2F5) from maize (seed) and tobacco (leaf) extracts. The factors affecting the chromatographic behavior of mAb 2F5, and maize seed and tobacco leaf proteins were also determined. The adsorbents showed a reduced affinity to purify proteins from tobacco extract as compared to the maize extract. Under optimal conditions, histamine exhibited high selectivity for mAb 2F5 and presented a high extent of purification (A95% purity) and recovery (A90%) in a single step with salt elution from the maize seed extract. The antibody fractions, purified from affinity chromatography, were further analyzed on ELISA and Western blot. This showed that the antibody was completely active and free of degraded variants or modified forms. It was concluded that the affinity chromatography is a versatile technique for biotherapeutics and antibody purification.

Affinity chromatography is a helpful tool for cleaning and removing excess albumin and α2- macroglobulin from samples as these components could interfere with the downstream process analysis. For this, Blue Sepharose affinity chromatography is the suitable type of affinity purification. In this method, the ligand is covalently coupled to Sepharose via a chlorotriazine ring. Albumin, to be removed, binds in a nonspecific manner by electrostatic or hydrophobic interactions with the aromatic anionic ligand. The most commonly used dye is Cibacron blue F-3-GA which can be adsorbed onto Sepharose to create an affinity column. The method has been found efficient for 90% albumin clearance.