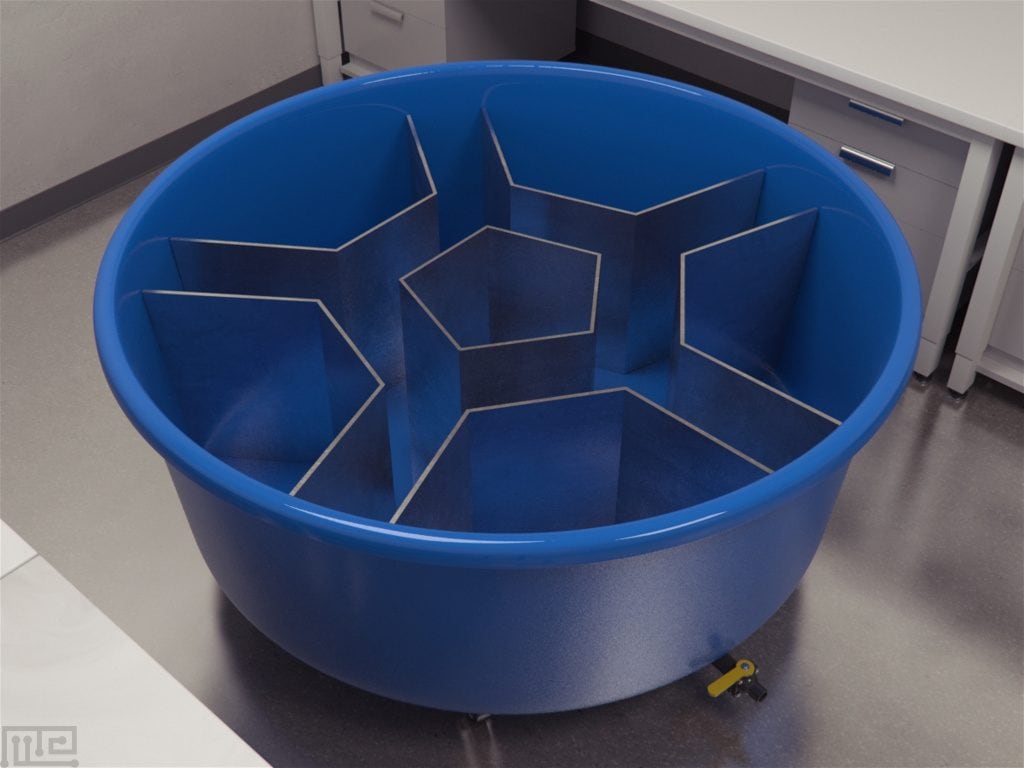 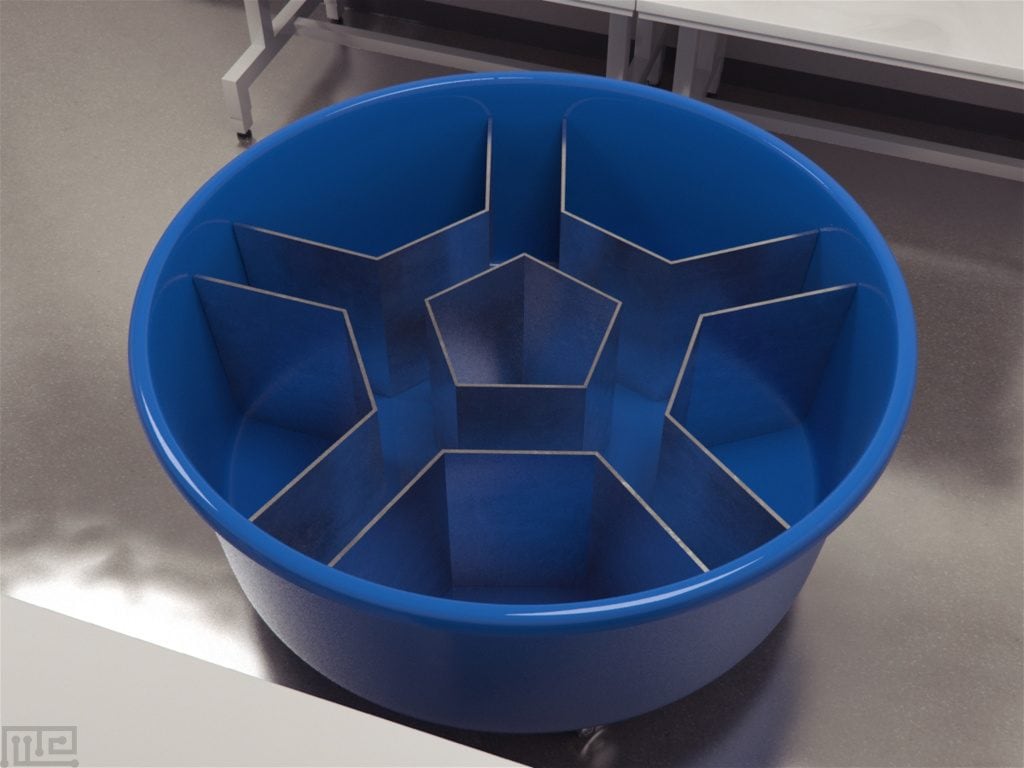 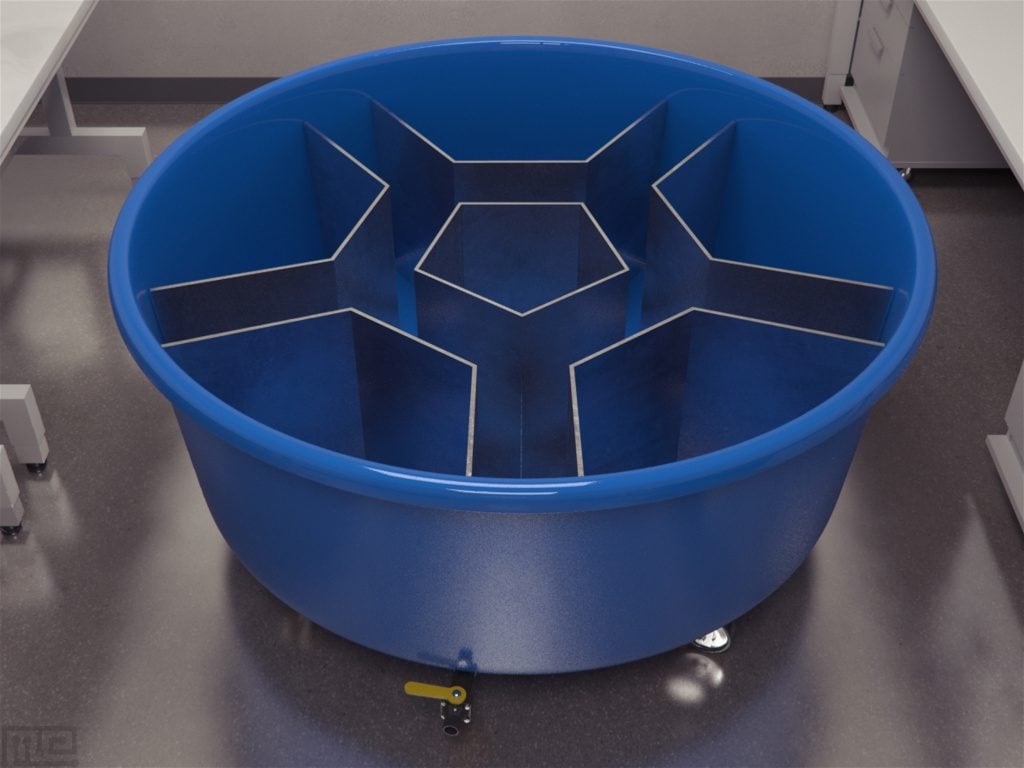 The original Star maze was described in the literature by Dr. Laure Rondi-Reig  as a method to study spatial navigation and its two different orientation systems, allocentric and egocentric navigation. The original maze in the literature utilized a round acrylic arena with a star in the middle. The MazeEngineers iteration takes the Morris Water maze as an external boundary for the Star Maze Task. Inserts are provided to fit your Morris Water Maze, with the added benefit that the classic Morris Water Maze task can be done in addition to the Star maze. The star is made from Stainless steel for long term use and minimization of corrosion. 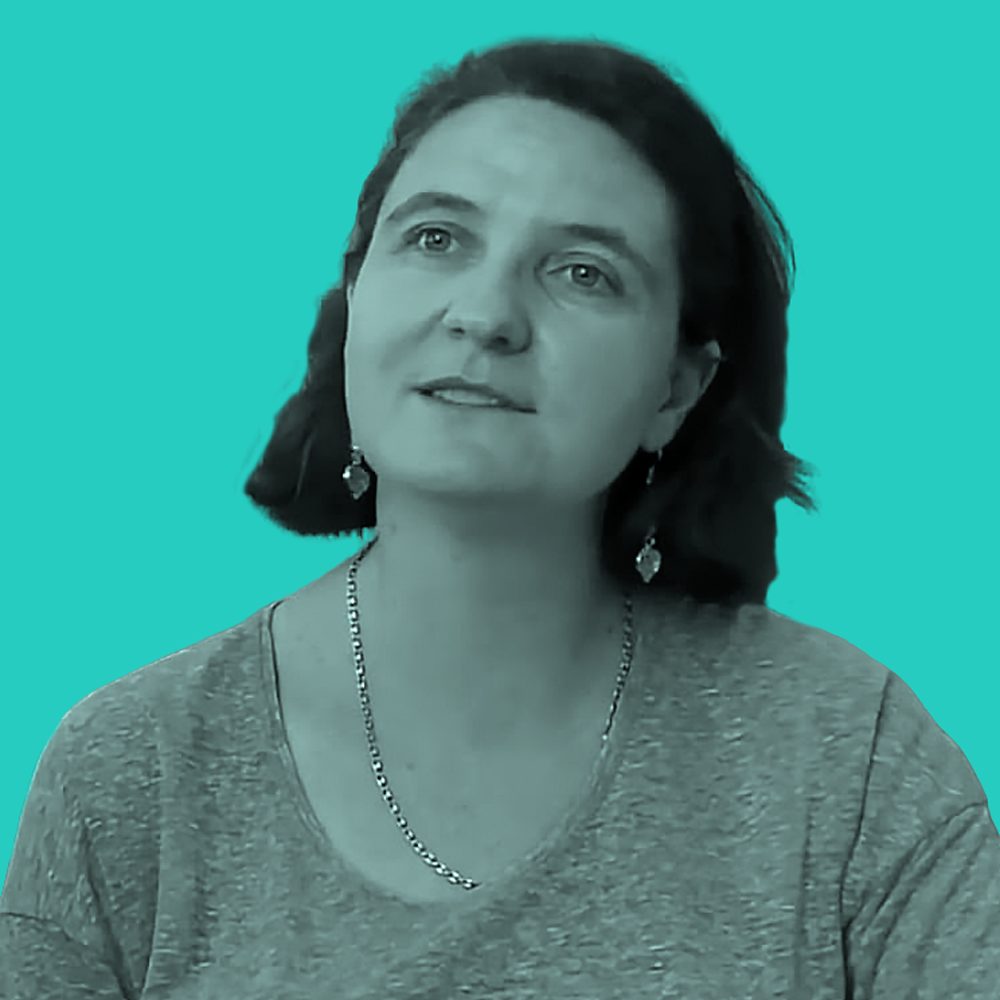 After studying Biology and Neurosciences at the Pierre and Marie Curie University (UPMC) in Paris, Laure Rondi-Reig obtained her PhD degree on the “Role of the cerebellum in motor and spatial learning”. She was trained in behavioral genetics and neuropsychology of memory during her postdoctoral stay at the Massachusetts Institute of Technology (MIT) in the laboratory of S. Tonegawa, and her collaboration with H. Eichenbaum at Boston University. She was then recruited at the French institution for research, the CNRS, and worked at the Collège de France in the laboratory of A. Berthoz. She currently leads her own lab entitled “Cerebellum, Navigation and Memory” (CeZaMe) at the Neuroscience department of the Biology Paris Seine Institute (NPS, IBPS, CNRS, Sorbonne University, Inserm) and is President of the scientific council of the life science department at Sorbonne University.

Laure Rondi-Reig is a recognized expert in the Memory and Navigation field. Her work established the functional link between the cerebellum and the hippocampus in spatial cognition and emphasize the crucial role of self-motion calibration for Navigation and spatial Memory. She is the inventor of the Starmaze, which evaluates memory and navigation strategies in rodents and humans and was awarded the CNRS bronze medal in 2010, the FRM Iagonitzer prize in 2012 and the SATT Lutech innovation prize in 2019 for her invention and its application in the diagnosis of memory disorders in humans and rodents models.

A useful tool in the complex study of spatial navigation in the field of behavioral neuroscience is the web-like design of the Star Maze (Rondi-Reig et al., 2005). The Star Maze, a combination of the widely-used Morris Water Maze (Morris, 1984) and the T-maze (Packard and McGaugh 1996), allows elaborate observation into the complexities of spatial navigation processes, both in the acquisition and organization of spatial knowledge, differentiating among the few possible strategies involved in the task.

The star maze apparatus efficiently integrates inspired components from each design. The rodent is tasked to locate the escape platform submerged under the surface of the water by navigating a five-branch maze, thereby encountering a number of intersections. Similar to traditional maze paradigms, rodents are introduced to the apparatus and are pre-trained, during which rodents swim from a starting position in one alley towards the escape platform located in another alley. During test probes, they are then tasked to locate the same escape platform but from different starting points within the star maze.

Through this process, one may identify the multiple strategies that animals employ in spatial navigation, whether map-based, using a similar sequence of movement, guided by visual intra-maze cues, or a combination of these. The star maze apparatus may, therefore, adopt a variety of experimental protocols (Rondi-Reig et al., 2005), each of which detail the strategy or strategies employed by the rodent.

The star maze can be used as a useful research paradigm in studying and differentiating among the many aspects of spatial learning. The observable behavior of subjects placed within the star maze apparatus lends itself to a more elaborate conception of spatial navigation.

The star maze apparatus consists of five alleys forming an inner pentagonal ring, and one alley branching out of each pentagonal junction. The star maze alleys are made up of aluminum for long-term usage. The maze structure is circumscribed by a tub 4, 5, or 6 feet in depth designed to be filled with water made opaque through the usage of pure or powdered milk, white non-toxic watercolor paint, or other such materials. Depending on the chosen experimental protocol, the walls of the star maze apparatus may be fixed with intra-maze cues if the intra-maze cue-based guidance strategy is to be observed. The setup may be placed anywhere in the room or laboratory, and extra-maze (distal) cues may also be maintained.

The apparatus’ design provides the rodent with the task of locating the escape platform hidden in the water, placed in one of the five alleyways. The rodent is pre-trained with one alley as its starting point and tested during probes by letting it start from a different alley. In this manner, different spatial strategies can be identified.

There are four possible versions of the star maze task. These experimental protocols are briefly described below.

During the training trials, the rodents are placed in one alley and tasked to look for the escape platform located in another alley within the star maze. Using a standard experimental protocol for identifying multiple strategies (Rondi-Reig et al., 2005; Rondi-Reig et al., 2006), the star maze may adopt a fixed configuration in which the rodent’s starting point during pre-training is alley 1, and the escape platform is fixed in alley 7 (refer to figure below). This particular experimental protocol normally lasts 20 days during which, aside from pre-training, the rodent’s learning ability is also assessed. In this manner, four learning strategies are observed. The map-based or allocentric learning strategy makes use of distal visual cues that are found outside of the maze, typically extra-maze cues fixed within the room or laboratory. The sequential-guidance learning strategy follows a sequence of intra-maze cues found on the walls of the maze. The sequential egocentric strategy, meanwhile, involves learning a sequence of bodily movements, particularly in turning left or right (Rondi-Reig et al., 2005). The rodents’ behavior during pre-training is observed using Noldus Ethovision XT.

Probe tests are usually held in-between pre-trainings, every five days. Rodents are placed in their new starting point in alley 5. A timer is used to measure the mean escape latency. The number of visited alleys and the trajectory employed in locating the escape platform is also recorded through Noldus Ethovision XT. The probe tests last 90 s, after which rodents are placed on the platform if they were unable to do so on their own. The rodent is left on the platform for 30 s.

The allocentric version of the star maze task is designed to solely assess the ability of rodents to organize and map out their spatial knowledge in navigating the 5-alley maze and locating the escape platform. Rodents undergo pre-training, and during allocentric probe tests, they are put in randomly selected starting points for each trial. Latency time, the number of alleys visited, and the trajectory is measured through a timer and Noldus Ethovision XT.

Specific experimental deficits, for instance, has helped in observing the involvement of the hippocampus in the spatiotemporal organization of information (Rondi-Reig et al., 2006). These findings may be imperative in the early detection of age-related cognitive deterioration in humans.

The sample data of the star maze allocentric-strategy test is represented by plotting the mean number of alleys visited by rodents across experimental and control groups. The knock-out mice, which had a higher number of alleys visited than control mice, are significantly impaired in accessing memory of the escape platform’s location. These results suggest the involvement of the specific receptor gene taken out of the KO mice in the allocentric or mapping aspect of spatial navigation.

Sharing similarities with the Morris water maze and the T-maze, the star maze successfully takes inspiration from both tests in offering a detailed analysis of spatial learning capabilities. Rodents’ swimming trajectories are restricted by maze walls, allowing for a more systematic analysis of navigation. The star maze test offers not only a component-based view of spatial processes but evaluates the rodent’s ability to choose and alternate between strategies spontaneously.