The Effects of Caffeine on Mice Behavior

The nervous system has a fundamental role in the control of behavior. In order to modify behavior, stimulant drugs are often used to improve mental processing. Among these stimulants, caffeine is the most popular substance consumed worldwide, being found mainly in coffee. It is believed that caffeine works by binding to adenosine receptors. Adenosine is a nervous system modulator, which means that it acts as a messenger when released from a nerve cell (neuron). When adenosine binds to its receptors, the activity of neurons slows down, resulting in sleepiness. Caffeine acts as an adenosine-receptor antagonist, which means that it binds to adenosine receptors, but doesn’t slow down the neuron’s activity like adenosine would. This, in turn, boosts one’s energy and mental processing. In addition, caffeine also influences other brain chemicals (neurotransmitters), including acetylcholine, dopamine, and norepinephrine, thereby enhancing mental processing. Interestingly, studies in mice show that caffeine can alter behavior through various mechanisms.

Anxiogenic substances such as caffeine cause anxiety. Caffeine is well known to promote anxious behavior in mice. In a study by El Yacoubi et al., they found that both acute and chronic caffeine administration in mice induced anxiety-like effects.[1]

The researchers injected caffeine in mice at a dose of 50 or 100 mg/kg in order to assess the acute effects. On the other hand, the chronic administration was done by injecting 50 mg/kg twice daily for 1 week, or consumption in the drinking water (0.3 g/l) for 8 days or 2 months. In order to determine the anxiogenic effects of caffeine on mice, an elevated plus maze was used. This test is based on the natural dislike of mice for open and elevated areas. The results of the study showed that both acute and chronic caffeine administration in mice increased proneness to anxiety, suggesting that it has a potent anxiogenic effect.

In another study, Bhattacharya et al. reported that subchronic injection of caffeine (50 mg/kg) for 21 days, in different groups of animals, induced anxiety-like behavior.[2] The researchers observed that rats who received caffeine injections had decreased number of entries and time spent on the open arms of the elevated plus maze, reduced social interaction with other rats, and increased feeding latency in an unfamiliar environment – all of these behaviors are indicative that caffeine has an anxiogenic effect.

In another study, Onaolapo et al. found that caffeine administration improves recognition memory in mice.[4] The researchers performed Y-maze test and object recognition test. Mice were injected with a single dose of caffeine 30 minutes before Y-maze exploration. For the object recognition test, the researchers administered caffeine 30 minutes before training and another dose 30 minutes before commencing the test. Results of object recognition test showed that female mice spent more time exploring the new object than the familiar object compared to male mice, suggesting that caffeine injection improved non-spatial memory retention in female mice but not in males. On the other hand, the results of the Y-maze test showed that male mice were able to perform successive entries into the three arms of the maze compared to female mice, indicating that spatial working-memory is improved in males but not in females. These results suggest that caffeine can improve recognition memory in a sex-dependent manner.

Effects of Caffeine on Long-Term Memory 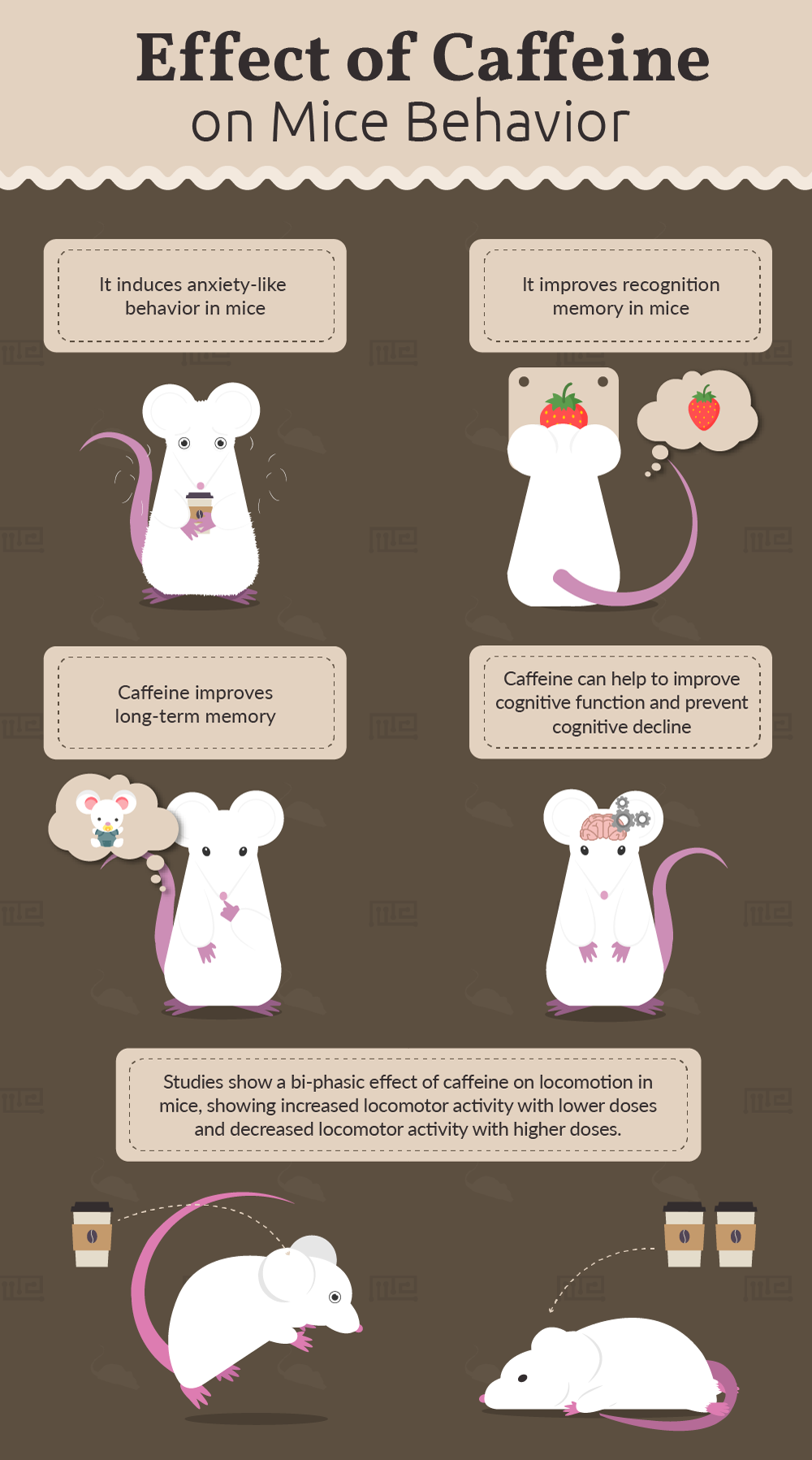 Caffeine is known to benefit mental alertness and short-term memory. However, research suggests that it can also boost long-term memory and counter-memory problems associated with sleep deprivation.

In another study, Alhaider et al. fed rats with caffeine (0.3 g/L) in drinking water for four weeks.[6] The rats were deprived of sleep for 24 consecutive hours and were tested for learning and long-term memory in the radial arm water maze (RAWM), a pool containing water that sufficiently hides the escape platforms. The results of the test session showed that caffeine-treated rats which were sleep-deprived learned faster at finding the escape platforms within the maze than those which didn’t receive caffeine treatment. In addition, the caffeine-treated rats committed lesser errors within the maze compared to untreated rats, suggesting an improvement in long-term memory. These results suggest that caffeine can be helpful in ameliorating the effects of sleep deprivation on mental processing, thereby improving long-term memory.

Effects of Caffeine on Cognitive Function

Caffeine doesn’t only boost mental alertness. Studies on mice have also shown that it can help improve cognitive function and prevent cognitive decline associated with aging and other medical conditions.

In another study, Duarte et al. found that caffeine improves diabetic-induced memory impairment and prevents central nervous system damage in mice.[8] Caffeine at a dose of 1 g/L was mixed with drinking water of the diabetic mice. Researchers observed that caffeine-treated mice were able to find the correct way out of the Y-maze and they had decreased spontaneous alternation (tendency to choose a different option/route than one previously chosen). Upon examination of their brain, researchers found that the diabetic mice had decreased nerve damage and astrogliosis (abnormal increase in the number of the cells of the nervous system due to nerve cell destruction). These results suggest that caffeine administration can help improve cognition and prevent cognitive impairment in diabetic mice by improving nervous system health.

Effects of Caffeine on Locomotor Activity

Mice at different ages tend to avoid central areas of a new environment and they will just stay close to the walls. Based on this premise, scientists use the time spent and traveled distance of a mouse model in a certain area as parameters of locomotor activity. Interestingly, studies show that caffeine usually shows biphasic effects on locomotion in mice, with lower doses increasing locomotor activity and higher doses decreasing the locomotor activity.

A study by Yacoubi et al. found that low-dose caffeine injection significantly increased locomotion in mice.[9] The researchers used Digiscan Animal Activity Monitor system in order to assess the horizontal (locomotion) and vertical (rearing) movements of the caffeine-treated mice. Of note, a significant increase in locomotion was observed at low doses (6.25–12.5 mg/kg) and this stimulant effect gradually subsided when dosage was increased.

A similar study by Lopez-Cruz et al. found that high doses of caffeine can impair or suppress locomotion in mice.[10] The researchers administered caffeine in mice at high doses (25, 50 or 100 mg/kg). In order to assess locomotor activity, the open field apparatus was used. This apparatus is a clear glass cylinder which is divided into four equal quadrants. A locomotor activity is counted when a mouse crossed one quadrant with four legs. The results of the study showed that mice treated with high doses of caffeine displayed impaired or suppressed locomotion as evidenced by difficulty crossing one quadrant of the glass cylinder with their four legs. This effect can be attributed to caffeine’s anxiogenic properties.

Effects of Caffeine on Motor Skills

A motor skill refers to the precise movement of muscles in the body with the intent to perform a specific act. In order to assess the long-term effects of caffeine on motor skill, Tchekalarova et al. injected pup rats with caffeine (10 mg/kg or 20 mg/kg) during postnatal days 7–11 and/or 13–17 days.[11] To assess behavior, the researchers conducted a rotarod performance test. This test involves placing an animal on a horizontal rod, which rotates about its long axis. If the animal is able to walk forward without falling off, then it has good balance, grip strength, and motor coordination. On the other hand, if the animal holds on to the rod but not walking, this results in “cartwheeling” and this behavior invalidates the trial. Results of the study showed that rats treated with caffeine at postnatal days 25 and 32, displayed decreased motor activities as evidenced by cartwheeling behavior, compared to untreated rats. This suggests that postnatal treatment of rats with caffeine leads to impairments of motor skills.

Caffeine is the most popular substance consumed worldwide not only because it is readily available but because of its beneficial effects on mental processing. By binding to adenosine receptors and influencing brain chemicals, it exerts its stimulant effect. In mice, caffeine administration improves recognition memory in an age- and sex-dependent manner. Other studies assessing the beneficial effects of caffeine on mice suggests that this stimulant can enhance long-term memory and counter-memory problems associated with sleep deprivation. With regards to cognition, studies also show that caffeine can help prevent cognitive decline associated with aging and other medical conditions such as Alzheimer’s disease, by reducing the levels of abnormal proteins in the brain and protecting against nerve damage. At lower doses, caffeine administration can significantly increase locomotor activity in mice.

However, other studies suggest that caffeine can have adverse side effects on mice especially if consumed at higher doses. The decrease in locomotor activity of mice can be attributed to caffeine’s anxiogenic effect, which promotes anxious behavior and impairment of motor skills. While the benefits of caffeine in mice behavior outweigh the risks, there should be a standard dose to prevent side effects such as anxiety and decreased locomotor activity. With its benefits on memory and cognitive function, the administration of caffeine can be a potential therapeutic option for patients with memory problems and cognitive impairment associated with aging and other medical conditions.